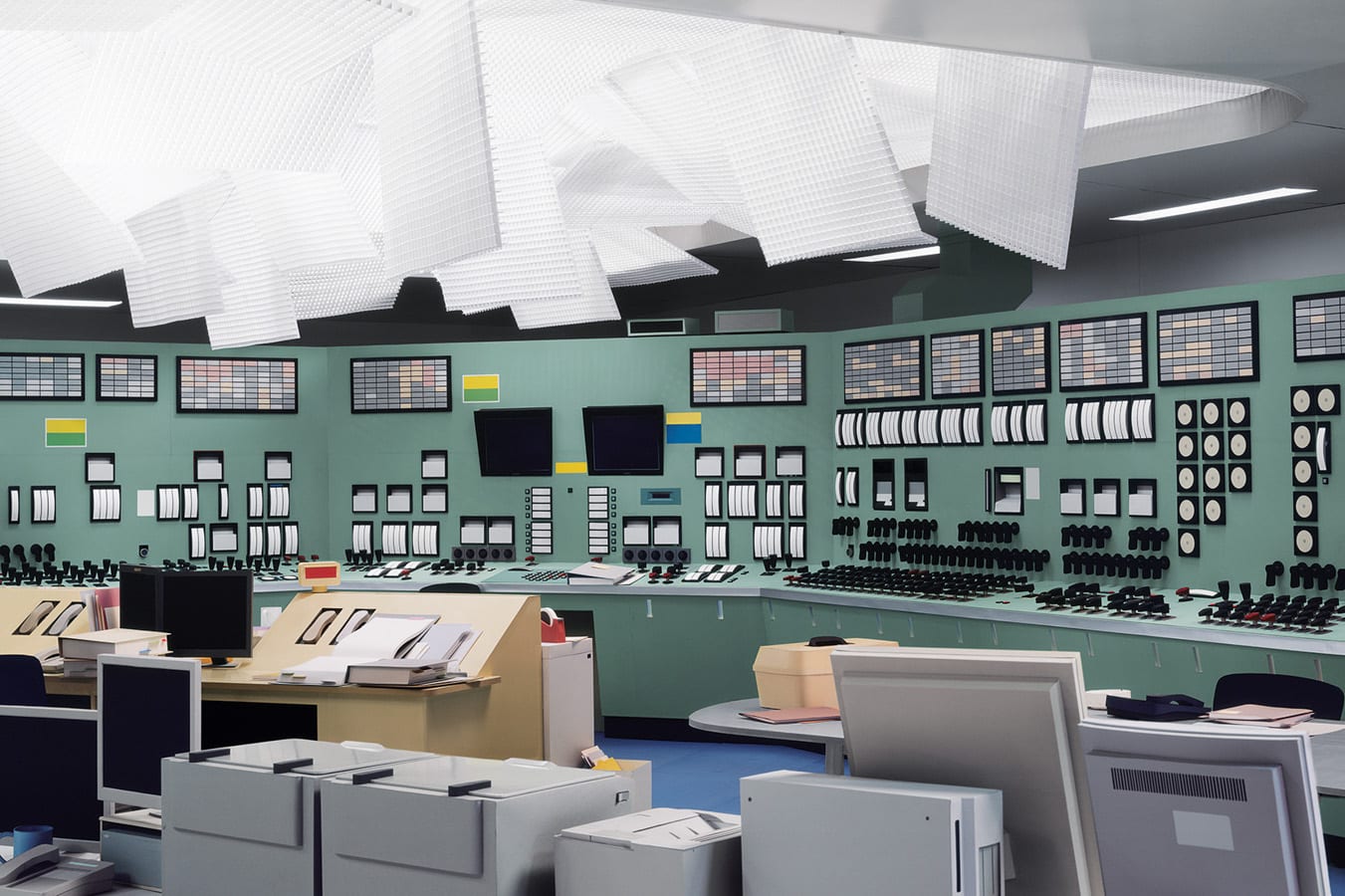 It is this sand-blasted speculation or rather en-spectralization, the ghosting and subsequent miasma of capitalism as it exists in the economy of images that we regard as relative at the very least-namely the aptitude to regard photography if not truth, certainly as plausibly disagreeable in a shared system of acknowledged solutions for knowledge-based communication.

To subordinate oneself and their practice to an enforced vacuity takes an incorrigible amount of self-sacrifice. One has to give into emptiness-an emptiness that deconstructs various signifiers closely situated to the folds of time and space and life that inhabits the creator or viewer’s perceived or at least hoped-for-reality. The vacuity I speak of is intended and it conducts itself with a confidence to distort and err the natural perception of the world. It intentionally glosses over the result of our over-stimulation and creates a parallel universe in which different economies exist without the fine lines and minutiae of economically tectonic fault-line versions of reality. It is this sand-blasted speculation or rather en-spectralization, the ghosting and subsequent miasma of capitalism as it exists in the economy of images that we regard as relative at the very least-namely the aptitude to regard photography if not truth, certainly as plausibly disagreeable in a shared system of acknowledged solutions for knowledge-based communication.

Thomas Demand is singular and his is a conundrum of a practice that few can pre-ponder. His vision for discussing meta-political and economic questions of philosophical origins is intended for the frame (mostly). His renderings/pictures/photographs/tableaus/uncertainties/rebellions are given a space in which they are enforced as pictures in the way in which their status rests in two-dimensions projections from the interior life of a very three-dimensional simulation/model/world. To give any outside governance to Demand’s craft is to situate oneself directly within the confines of the problem that results in the distribution of meaning-a perplexity of agreed–upon narrative or possibility that is but impossible in the status of his renderings. They is exist in a haze and they defy normal solutions for acquisition. If we replicate his world, the trace innuendos of the agreeable with the starchy fabric of a rendering, then we in effect chance upon this dialogue of trace, anima and its forensic potential within the first person orientation of existence itself. 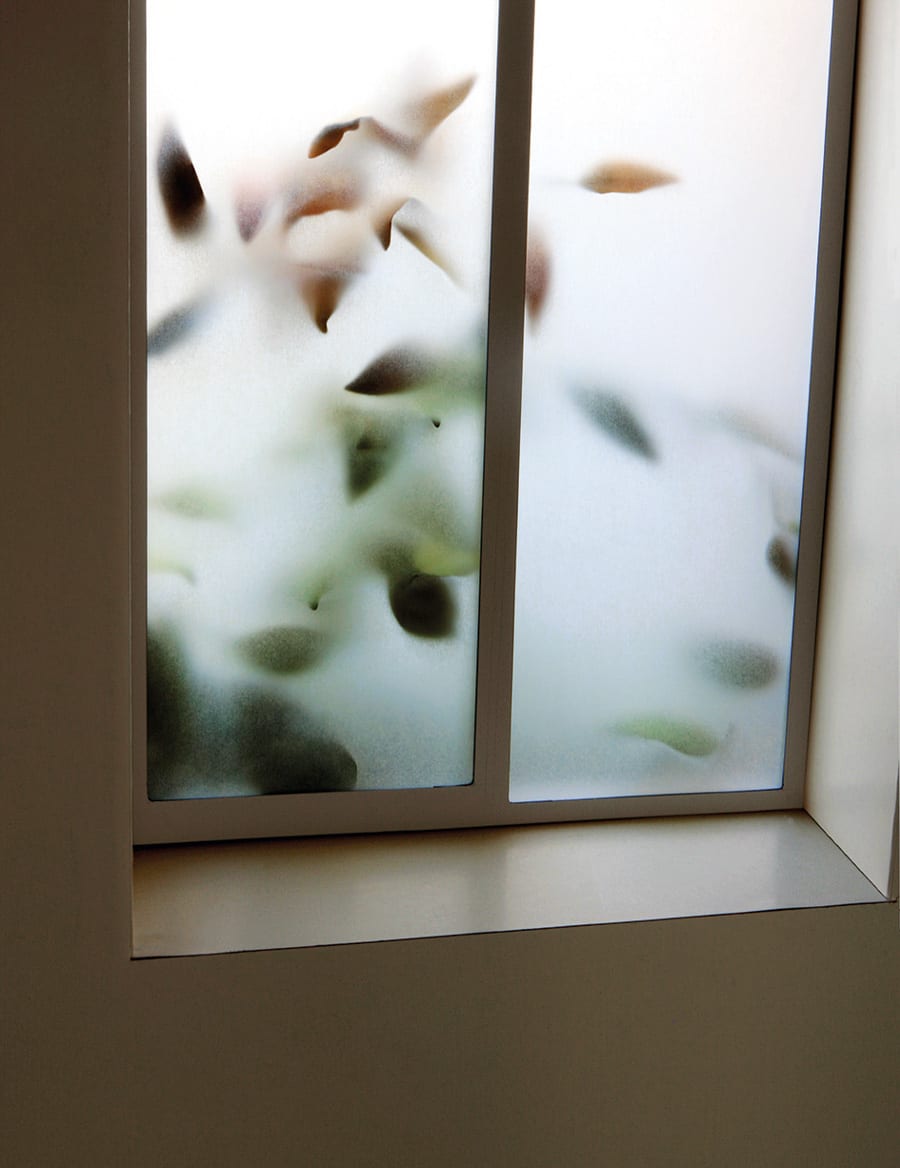 Demand himself is also a construct in which we examine a narrative we believe to be his as a viewer/spectator to his author ratio. Without our construct of Demand, his Post-War German-ness and our ability to operate and project in his distinct and singular work, we would not enable the work itself as to present definition of his methodology, which would subsequently reason to abnegate the locus of control that he seeks-the chaos is in the solidarity of his image’s oblique and white-washed exterior and his situation within a very particular cultural history and economy. The author constructs fields of ill-representations of trace affect within the signifiers he presents. Without the conceptual framework in which we are given the key of immediacy, that is to say that we understand the blanching of reality as a reduction to trace forms, we play instead into the construct of author worship and tyranny (I suggest this last term in a plausibly safe, constructive and adorning way based on singularity of vision). We buy the inevitable refraction of post-modern meaning for a dialogue in which we are led from the pulpit of  desire to define instead to be informed of our acceptance of our complacency in a reduction of terms.

“In Demand’s case and the reason why his importance is never undone in the treatment of the medium of photography is that, though a construct of a commentator/author, what his agency really implies is that of the complete destructor of universe, history and image. He has literally become image-death, the destroyer of worlds of perception and their historical implausibilities”. 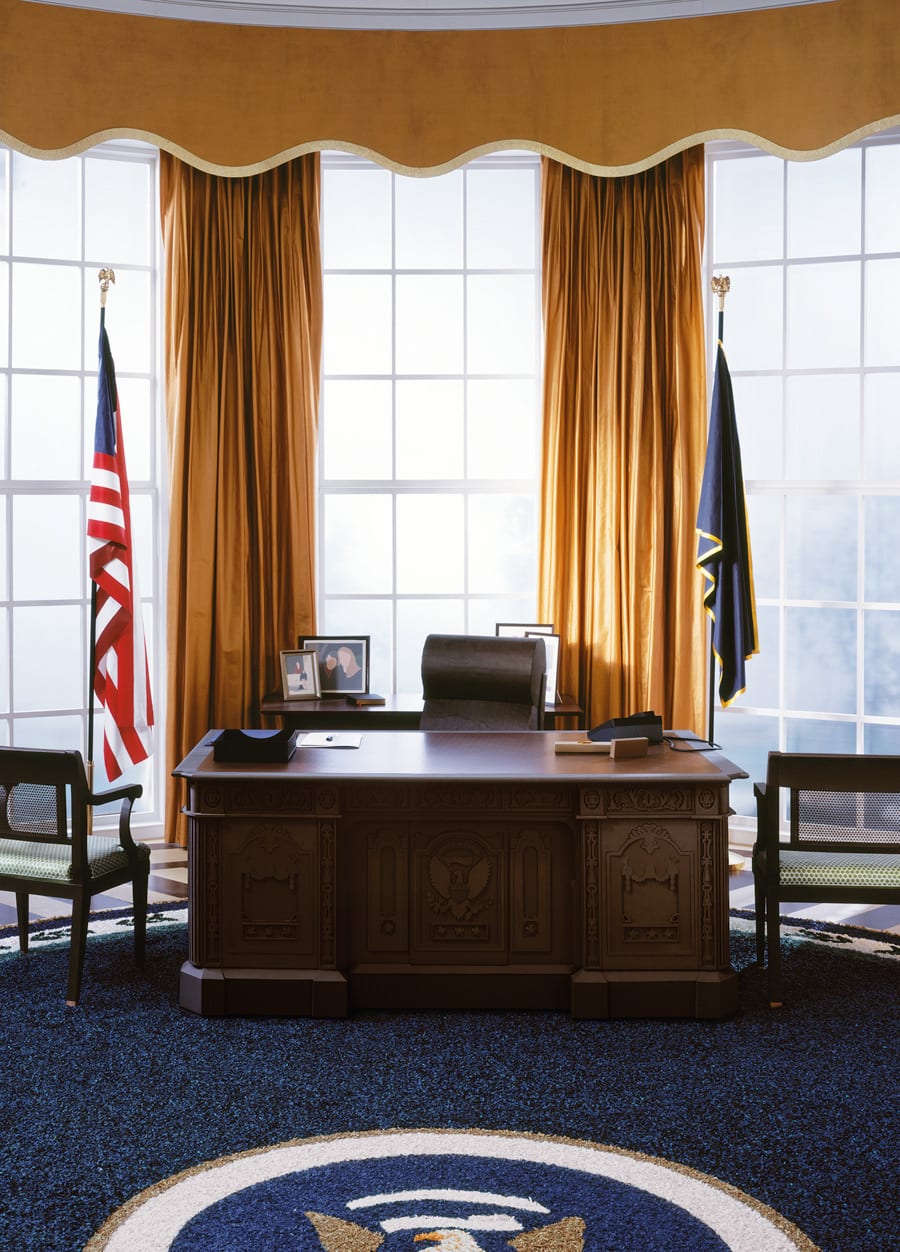 If constructing Demand and his work through chronological effort, we in effect design an anachronistic perspective built on trace within the work that lead us to the most recent output, an action definable by what it can never be again-namely, the historic past. In his construct, Demand becomes the master provocateur of the photographic image’s delay of appearance. The delay occurring as a sort of manifest commentary on our world, the complexities of its perception to knowledge systems, but also to its own machinations to be trusted, eviscerated or other in the timeline defaults of history. In Demand’s case and the reason why his importance is never undone in the treatment of the medium of photography is that, though a construct of a commentator/author, what his agency really implies is that of the complete destructor of universe, history and image. He has literally become image-death, the destroyer of worlds of perception and their historical implausibilities. 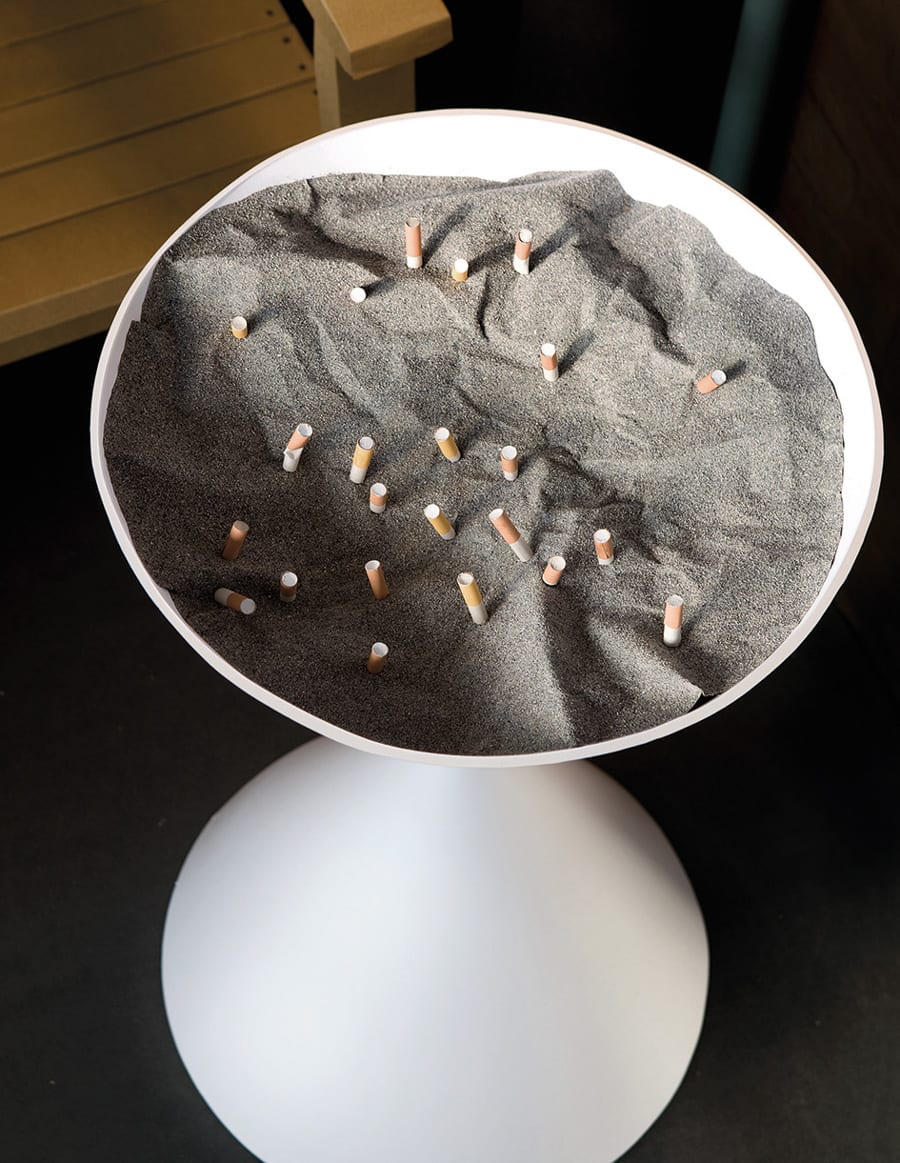 The itinerant nature of discussions regarding the paucity of realities and their ties to self, capital and technology are at the crux of Demand’s deconstruction or destruction as I posit above. In literally whitewashing images to a reduction of form and obliterating the distrustful appearance of language and branding/language of product as relatively signified in many images, Demand in effect destroys meaning and systems of capital knowledge and the largesse of agreement that is precludes in the works enforced inexactitude. What trespasses in the wake of this façade of archetypical form is essence as transcendence in the way in which the viewer constructs the image plane based on the signs and symbols of a capitalist age. All that is learned or acknowledged in sheets of language or pressures of image-awareness have been built on advertising, branding or other and is reduced to a mirroring or shadow-effect of process knowledge of capital themes and significance. Coffee cups bear green medusa-headed and misshaped and crumpled Starbucks forms and the oval office is combed over for pressing Intel in which we add text to papers left on unaided presidential desks marked imaginarily “strictly confidential”. What is remarkable and a tool of architectural and spatial employ is the complete lack of constructed identity of subject other than Demand himself in its overture. It is a presentation of the author through charitable means of forceful absence of other people. Demand is even able in this regard to manufacture himself as author of the presidency of the United States of America by politicking the absence of secondary being, namely the president him or herself. 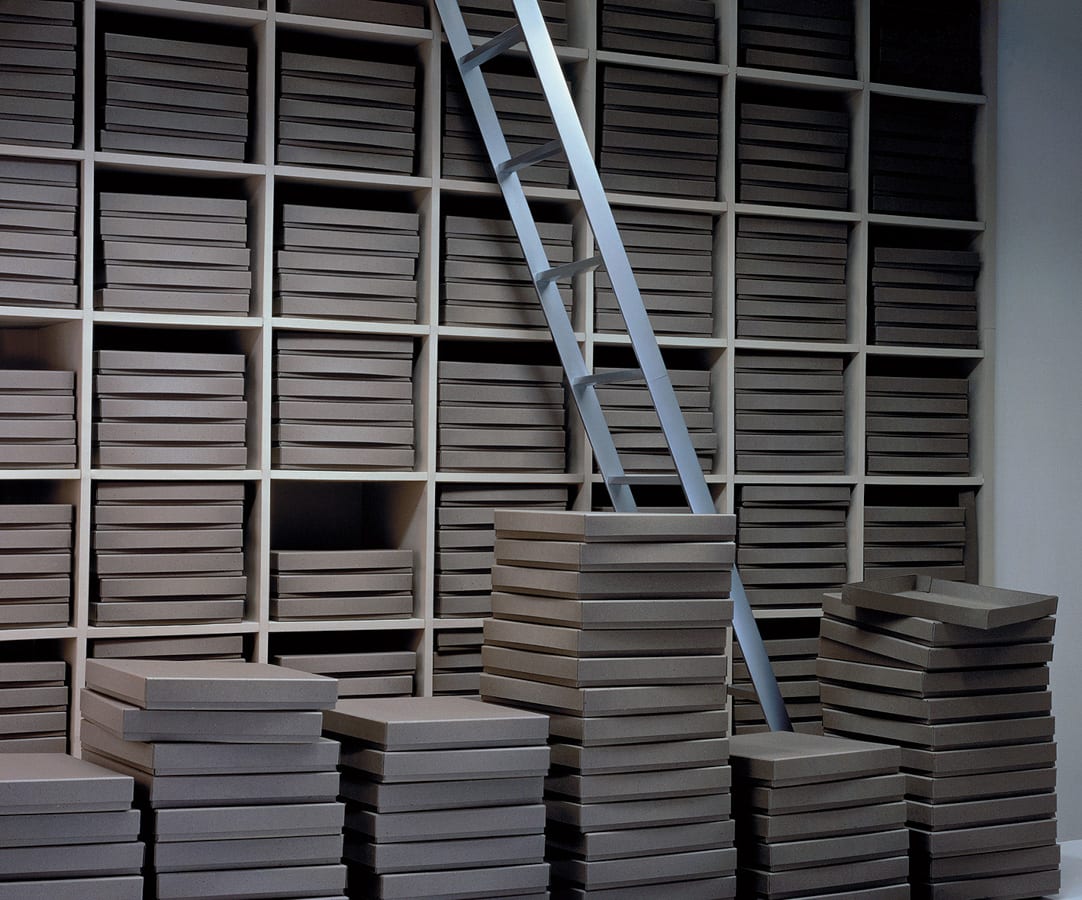 The Complete Papers is the most important book published in 2018. MACK has made an opus with Demand and editor Christy Lang that excels in gathering not only a mid-career survey of works from his earliest prototypes, but also a number of important essays by notable authors whom have at some point or another examined and critiqued, given credence to or run from Demand’s conceptual work which permeates itself in the anti-thesis of everything Twenty-First Century. Within, the chapter breaks are implemented with loose documents/sheets announcing their struggle to define each chapter head, daring you not to lose them along with pre-conceptions of the nature of a large hard cover catalogue raisonne which is also at the crux of Demand’s practice in a small way, but also and not de-facto to the position of the publisher, whose endgame goal-to produce opulent books of important work that exceed medium are implicit within the object’s architecture. I suggest that we will look back at this book from the future and the work Demand has created and we will see so much writing for the wall that its observation will announce a system collapse.  If we subscribe to doomsday apocrypha and these notions of a codex for our times, this title truly embraces the weight of all that is inclined to be a fixated as such. Christy Lang and MACK should be given due credit for the incredible exertion of effort that must have defined the book’s production. I imagine the author to have been exacting in its detail. That its reasonably priced is above and beyond what is ordered. Buy it now or wish you had. I doubt this one will see a second edition. Highest Recommendation.