“They become meditative plates in which the living continue with all their baggage to be stopped and given a reflexive moment in which to breath out”.

Book such as Ouarzazate are purposefully imbued with a procrastinator’s folly-which is to do something when one thinks he or she is in effect delaying an outcome of expendable energy by doing nothing much. There is so much intentioned nothingness to confront in Ruwedel’s work that a viewer if not schooled in the dogma of his minimal approach to vistas will find him or herself gullibly and fallibly believing that within this façade of nothingness, there is little effort to be manifested, little thinking to be done and little action that takes place in the dissection of his photographic images.

Mark Ruwedel is something of a conjurer, a sorcerer or perhaps a delicately performed master of minimal contrivance. His photographs are stark. They employ a tactic of exception in so much as that he singles out each frame and almost callously endeavors to purse one thing, without motion, without the conflation of human presence against the object of his choice (not desire), which remains mostly architectural. The exceptionalism for which I refer is not that he himself is an exception, but rather that it his subject itself that has been singled out, cleared of interruption and balanced upon the precipice of deeper more ruminating acknowledgement and is therefore excepted or sequestered perhaps from all the noise, static and inevitable and uncharitable interruptions of life. In this, his subjects become devoid of a persistence of life, instead excepted for a rather grave concern of epitaph and could be construed as tomb-like for their monumental and unmoving edifice. I suggest rather that within the hostility of the everyday cacophony of noise that life endeavors upon us, that what Ruwedel is actually and principally working towards is a transcendental sublime in his images. Despite their cache-like memorial appearance, I believe Ruwedel’s subjects brim with trace and anima suggestive of great goings on before the frame itself was invented and angled towards its colossal vista. I am not versed in the tenets of minimalism, but if I were I would not hesitate to bequeath upon Ruwedel a caveat in which he and his work actually function or perhaps go so far as to give space to the madness of contemporary life- They become meditative plates in which the living continue with all their baggage to be stopped and given a reflexive moment in which to breath out. 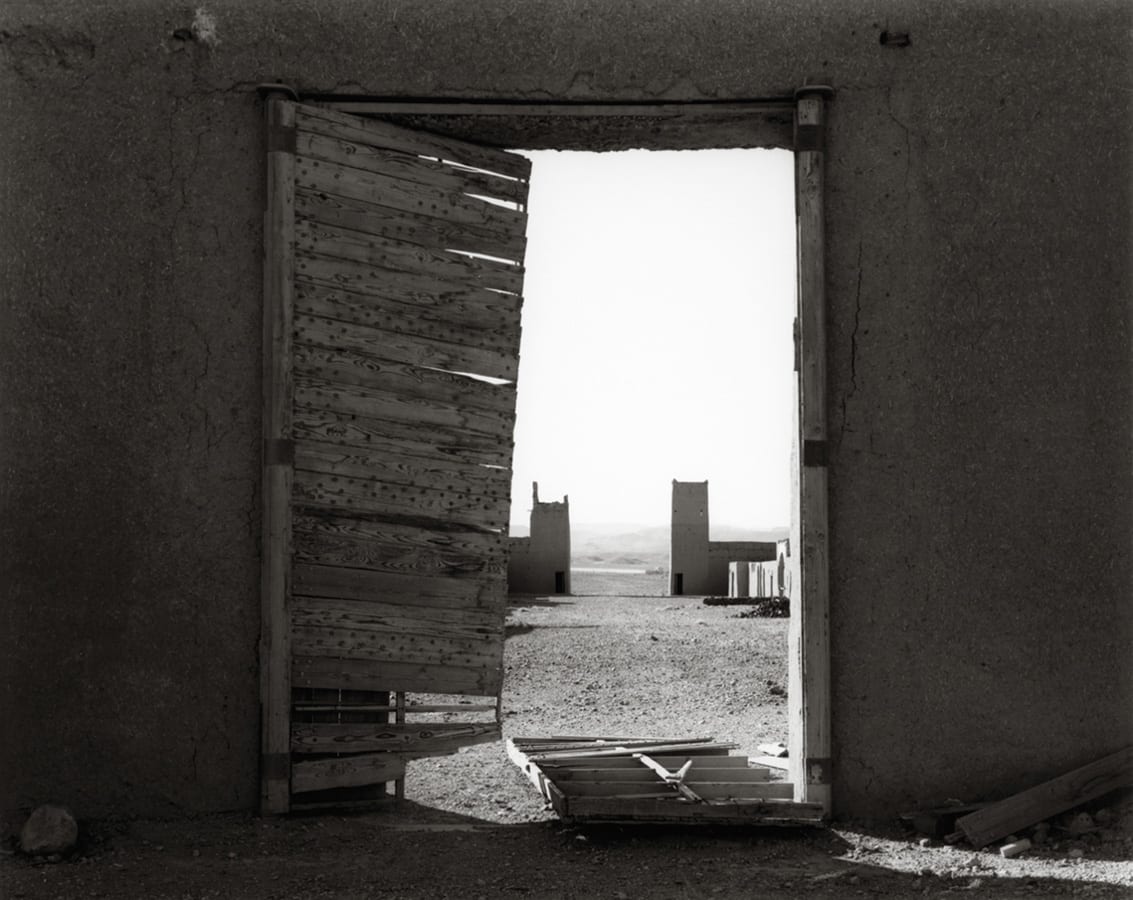 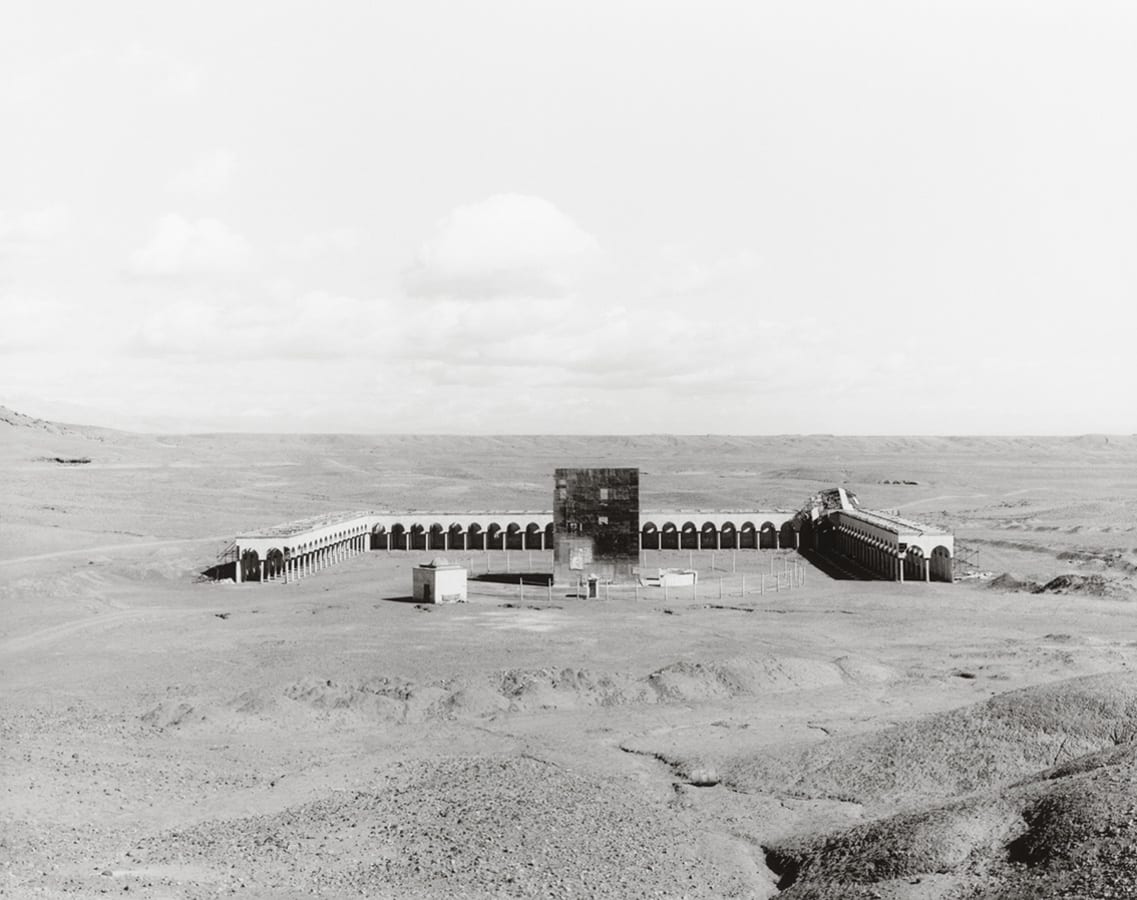 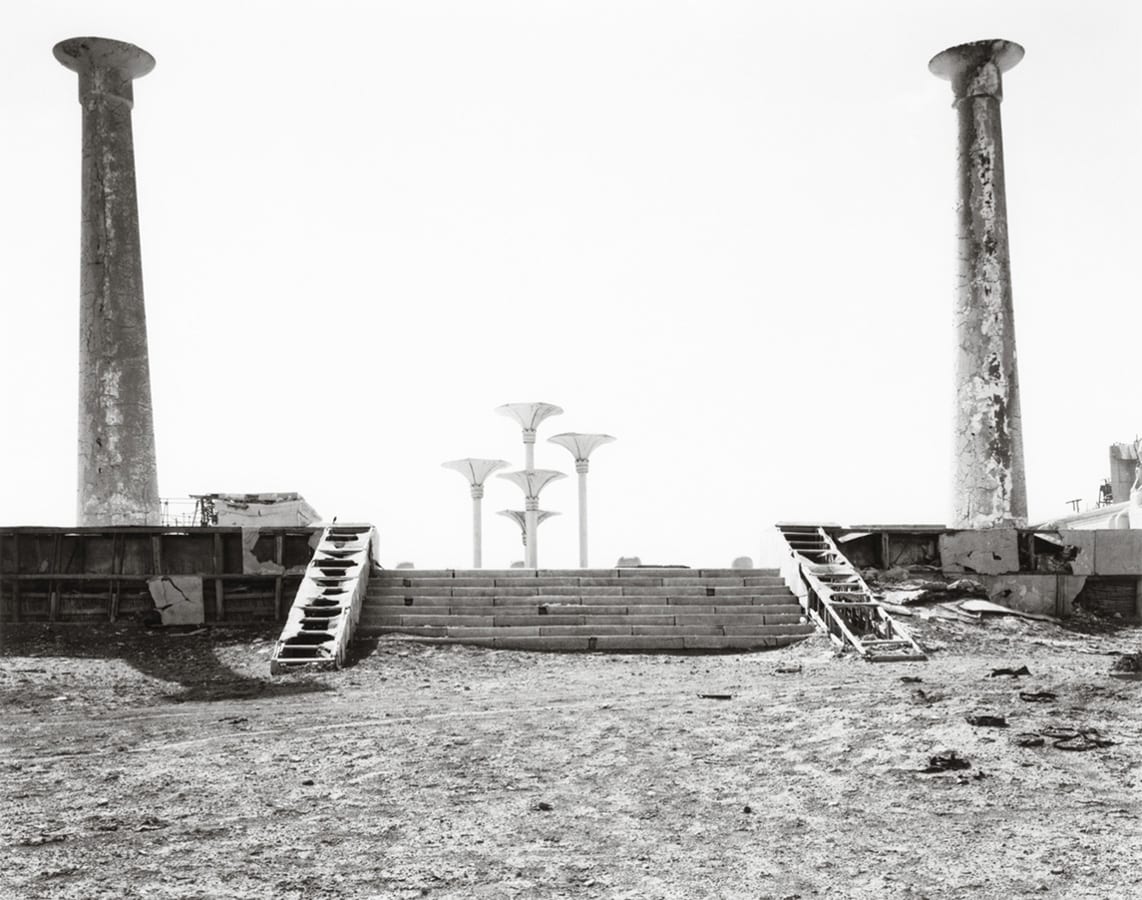 In the Nineteenth Century, there was an onslaught of photographers working in the northern Middle East-Egypt, Algeria, and Tunisia all had their share of photographers from Gerault de Prangey, Felix Teynard, Felix Moulins, Francis Frith, Francis Beasley Greene, to Felix Bonfils, J. Geiser, Neurdein, Soler, J. Pascal-Sebah working in the later quarter of the Nineteenth Century. The latter studios churned out photographic prints of types and scenes to be sold on location, but also abroad at booksellers on the streets of colonial capitals such as Paris, London, Barcelona-these are just a few of the capitals in which a person could assemble an album of photographs from the “orient” without setting foot on a ship bound for a Mediterranean cruise- those who did that, who were of means to do so, collected images from stationers and booksellers at each port-these ports stretched from the Middle East- Israel’s Jaffa, Egypt’s Port Suez and Algiers up to but not limited to Malaga, Cadiz and more closer to home, Monaco or Sorrento depending on where your trip would end. In each location a number of plausible scenes had been photographed and printed for the consumption of the well to do. Of note here is that Victorian travel albums were the pursuit of both sexes and assembled in nearly equal accordance. Egypt and the greater northern Middle East focused readily on types of locals and also important attractions such as the pyramids of Egypt and similar sites extending past the Nile’s first cataract. In Morocco, the Souk would become a particularly interesting location. In Tunisia and Algeria, the focus outside of Bone, Algiers, Constantine, Carthage and Tunis itself would be one of cultural significance-the types photographed, in particular the women, would be photographed focusing on Jewish life, Muslim life, but also the outlaw Tribal customs of the Ouled nail and Berber tribes, with an emphasis on their marriage customs and dowry system.

Egypt in particular held a deep fascination for colonial minds. It was only in the early parts of the Nineteenth Century that primitive archaeology gained a foothold (One can ponder on the term archaeology in reference to looting at any time) in its sands. The “great” first explorers/looters such as Italy’s formidable Giovanni Battista Belzoni and later The British master of uneven temperament Howard Carter would scour the sands of Egypt looking for access to tombs, monuments and objects often employing heroic efforts to secure and ship monolithic stone back to England to whom both were in service to. Within the photographic studio economy, such firms as J. P. Sebah, Emile Bechard, and notably the Zangacki brothers took over pre-existing firms and doubled the amount negatives in their back catalogue. They also realized that the point of sale for photographs of types abroad would rely on the subjects placed in their “natural” setting to persist “orientalist” stereotypes and noble savages, etc. By incorporating studio backdrops and props within the photographic studios, the operators could feign street life and architecture and amass a catalogue of sitters quickly. Re-building an edifice that would appear as a Cairo street and would work as a substitution for photographing in the inhospitable and busy streets below was common practice. If you see enough of the images produced between 1870 and 1900, you will note that several backdrops or “sets” are used over and over. These sets are the incredulous work of the studios fabricating a romanticized environment to increase sales of the “orientalist motif”. On occasion a rogue corner or bit of scaffolding persists from the corner of a tableau or untrimmed albumen print. The studio sky light can be seen in a few and on very rare occasion one can spot the hand of a minor assistant here or there holding a prop or loose studio wall.

Facades and backdrops are no new discovery when looking over the early days of photography or the film industry. Sets were built and whole areas of studio land were turned into plastic towns-they became ghost sets of indivisible use from their staged narrative on screen. One can certainly recall the house in Alfred Hitchcock’s “Psycho” as a prime example of this. There are also now in retrospect several notable books that look at things such as the painted backdrop and also photography’s roll in creating still frames for marquee signage that never existed-hand-embellished master prints from hand-embellished large format negatives used to promote studio offerings. The synthesis between film and photography and romanticism runs deep within both mediums. Theirs is an inter-connected web of fevered dreams and capitalist yearnings from Metropolis to late 80s b-movie horror releases.

“What photography does best is offer a space to contemplate all of these things when it is not poorly weaponized”. 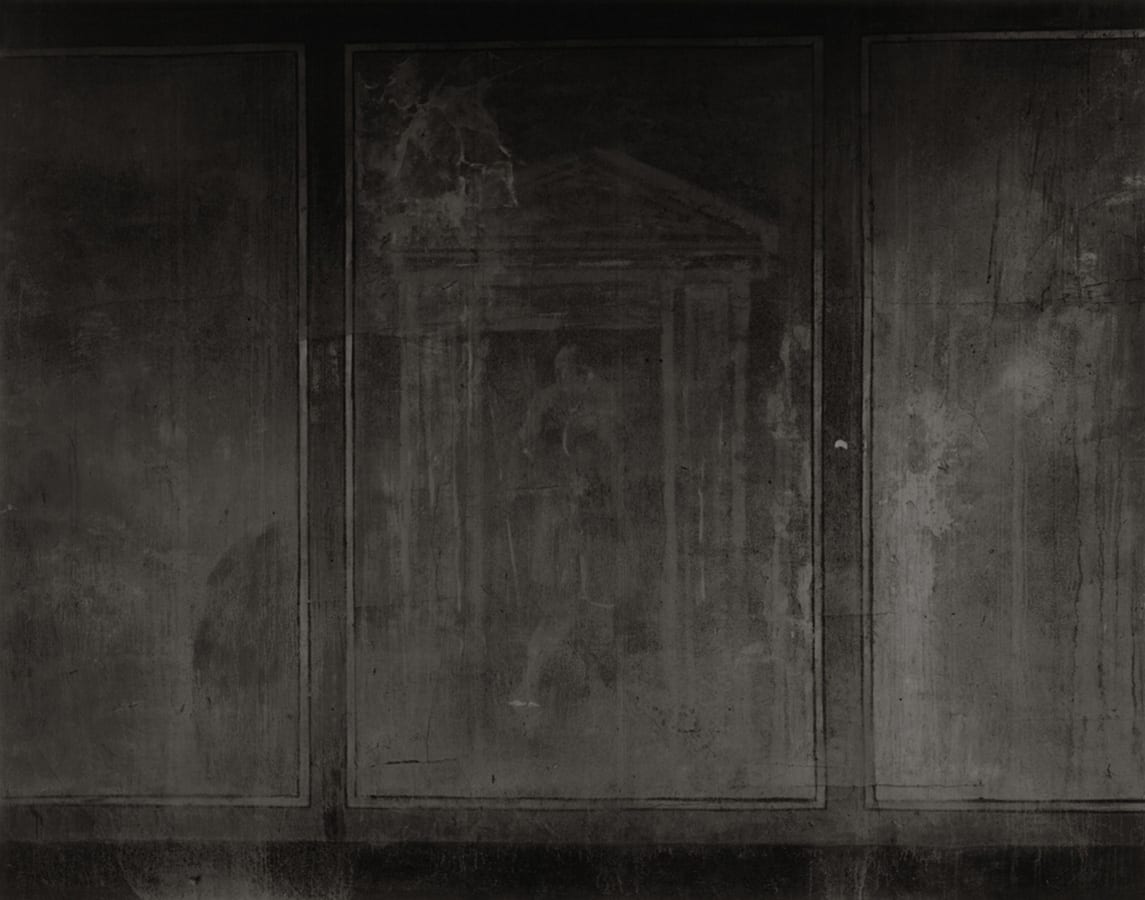 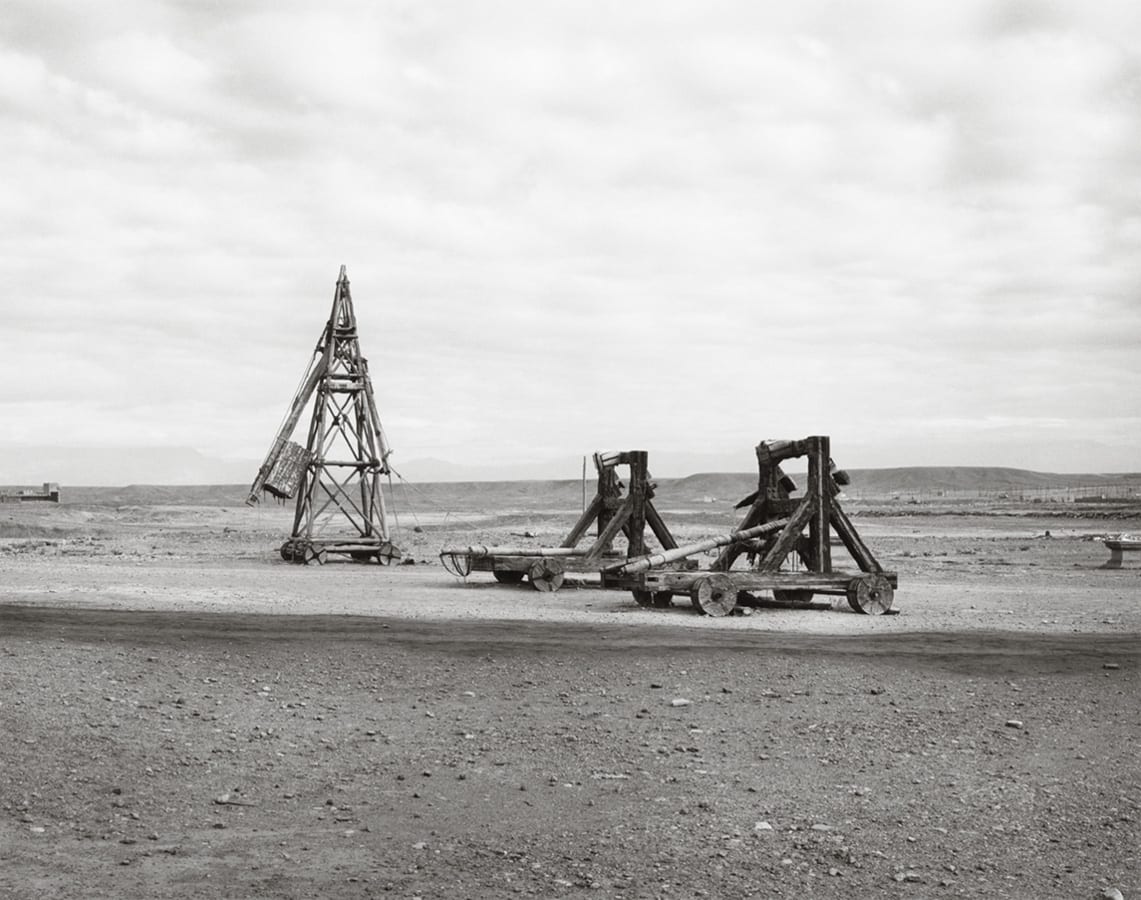 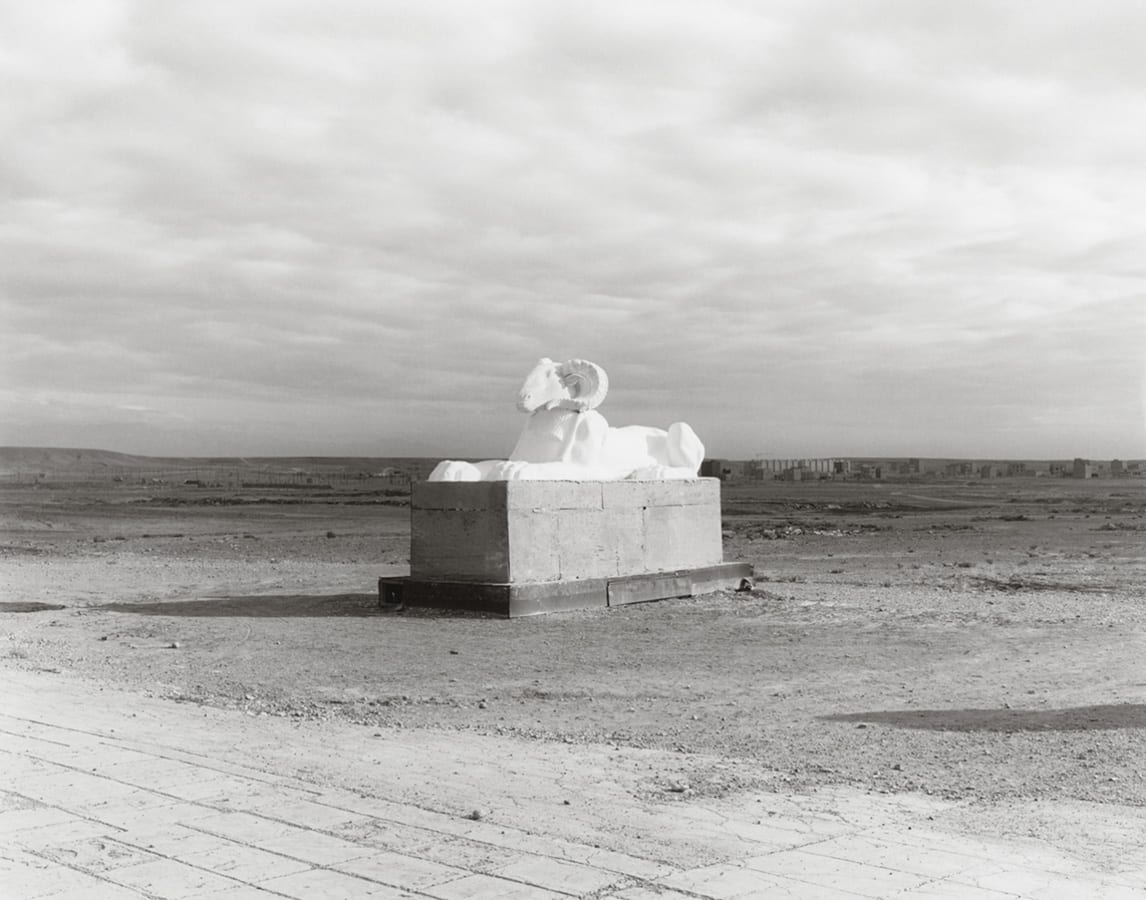 Mark Ruwedel ties all of the above elements together in his exceptional (yes) body of work “Ouarzazate”, MACK. Travelling to a disused film town/multiple set location in Morocco, Ruwedel employs his “slow” photographic eye like a new explorer-his objective is rather to find the shards of history in their processed and simulacra-laden form. Uninterested in the “real” of Egyptian monuments along the banks of the Nile itself, Ruwedel instead sets out to photograph the derivative thereof used in the production of cinematic dreams on a disused studio grounds in Ouarzazate, Morocco-home to a large film set location in some form of disrepair. This is quite interesting. He makes no effort to hide the fact of what he is doing-the upending nature of which is clear and present all possibility in the simple act of making the images. The layers of potential projection of meaning on the images-from a post Edward Said look at Orientalism to the crumbling façade of a façade is a matter of obvious discourse and philosophical conundrum, but what Ruwedel exceeds in is his ability to convey these potential ideas without uttering a word. He gives us the greatest gift in creating an image in which the viewer can fully project his or her own imagination and historical knowledge onto the plane of the image. Each image acts as a holding vessel, an urn or Canopic thought jar if you will, for the viewer to empty his or herself onto.

This is what I speak of when I mention the potential for a transcendental image. It allows one to empty into it instead of it force-feeding details of redundant and unsympathetic information by way of enforced “documentary” practice. I can think of and mention many projects or bodies of work in which the author takes the position of a nearly enfeebled God-like narrator, whose goal is to TELL us something instead of existing in relative parable. These are the critical failures of photography’s invention. You cannot tell me anything about abortion, its trials, its unsympathetic cold steel bed, cold lights or cold politics by making pictures of it. What photography does best is offer a space to contemplate all of these things when it is not poorly weaponized. What Ruwedel succeeds and is exceptional for is giving the viewer that space over that of nearly all of his contemporaries. Uninterested in telling stories, Ruwedel manages to give us a daunting book of gravity.