“There is also the play of “organic sight” seen from the unusual perspective looking down from above. It’s a interesting play between seeing things (purposefully without use of drone)…”

When that tantric knob end musical artist known as “Sting” was sending an “SOS to the world”, I’m pretty sure the limits of his imagination had him sending it as a proverbial “message in a bottle” doomed to be lost to the cumbersome and violent lashings of the sea somewhere off the coast of Britain forever lost, broken upon the jagged rocks of unknown shores. The message thus lost and the tantric eel in his trousers the only testament to the trauma of the SOS’ existence.

What Sting and plentitudes of other well-intentioned scribes from centuries forward have missed was the possibility to send a notice to the world writ large and observable from the sky. They have continued to fumble over small letters and poor lyrics. “Primitive” man from Nazca, Peru to the creators of the Cerne Abbot Giant in Dorset, England had the correct methodology for communication. We exist in the small sheltering miasma of our possible communications unable to observe or to beg rapport with the heavens. When seen from above our emboldened and enlarged terra-messages-these humbled landscapes, bear little testimony to the grandeur that we believe they possess. It is only those rare geographic locations in which man moved earth to communicate his symbol to sky that he has succeeded in a language greater than himself which has subsequently passed centuries with the same comprehension of intent as when conceived, its smooth lines of language traced by satellite and cosmos.

“There is almost something mean about it, something arrogant as if to say, “you cannot be part of this, but I can draw for you what it looks like”. I use this reference to egoism as a jest, but not in unkind truth” 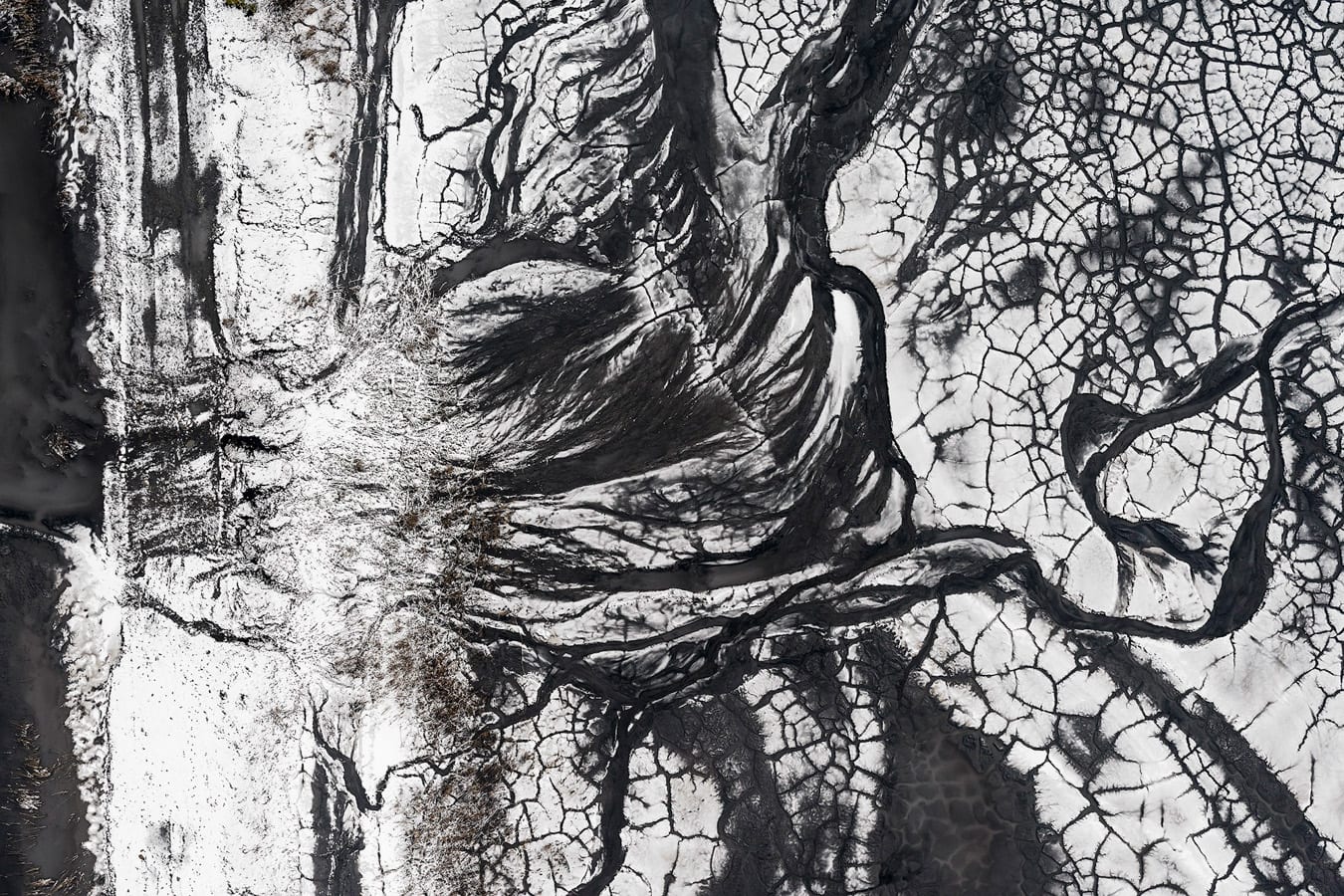 Kacper Kowalski’s photographs have very little to do with Sting in truth. The images are aerial in nature, shot from his single seat gyrocopter. Kowalski in his book Over has written a quite profound essay about why he chose to make work from the mechanical contraption, which when you see the gyrocopter itself, it reminds one of a da Vinci invention. What separates the Kowalski’s earlier work and aerial interventions from Over is not the vantage point or the abstraction, per se. What separates the canvas for Kowalski in the new work is a deep sense of painterly value, but also the way in which he is exhibiting the world from this vantage point, covered in snow. The works in effect become nearly monochrome and lost to a snowblind pattern of relief from parking lots to lumber yards. The images become paintings reminiscent of 60’s conceptualism-Bernar Venet springs to mind at times as does Lucio Fontana, and perhaps the white encaustic surfaces of a Jasper Johns painting-and of course we cannot forget to include photographic artist Mario Giacommelli.

The language of Kowalski’s work, the insistence that the viewer can understand this geo-painterly gesture in its minute detail is what saves the images from becoming simple excuses of zombie formalism. There is clear communication occurring under the blanket of pure white snow. There is also the play of “organic sight” seen from the unusual perspective looking down from above. It’s a interesting play between seeing things (purposefully without use of drone) and trying to relay the information back to the viewer who cannot inhabit the vantage point in the same way, from the same position. There is almost something mean about it, something arrogant as if to say, “you cannot be part of this, but I can draw for you what it looks like”. I use this reference to egoism as a jest, but not in unkind truth. In his essay, Kowalski illuminates us to this sacred viewpoint and how it has become immutably challenged with the rise of drone technology and global positioning system. He speaks of the disheartening idea that wanderlust is dead and that we have nowhere left to map from the sky with our new technologies-What is left is below the surface from which Kowalski paints.

I had not heard of Kowalski previously, but a cursory summation of his work clearly outlines his sincerity as a photographer. The reason I took this review on is because of its simple, elegiac and beautiful summation of reason, communicable painting and a deep sense of our ecological position in the age of its decline. I do not feel Kowalski is speaking largely on ecology, but it certainly plays into it in a brave and beautifully minimal affair. Highly Recommended.