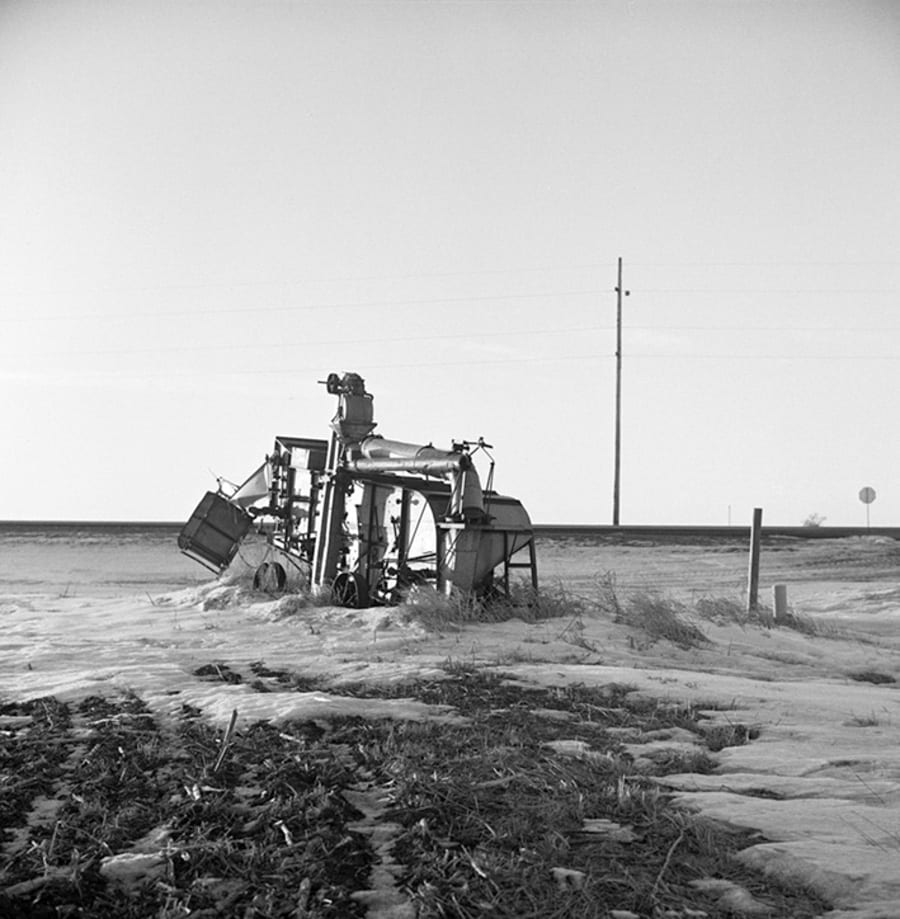 “Visually and technically for photography, the season is something of a conundrum, it is firstly a phenomenon that catches our impassioned attentions but it is also incredibly loathsome to be captured on film…”

At the end of all seasons per annum stands the sole hurdle in which a Midwesterner must find him or herself locked in battle for the opposing months to come. It is not unfamiliar to the imaginary metaphor of two stags with antler’s locked falling into a crevice in which they will never return-or at least that is how January feels. Growing up in the flat and icy plains of the Midwest with its snow ploughs, diseased black ice and its bitter and noisy cold is an experience that one doesn’t easily forget or forgive. On the best of days, it provides time away from the useless tire of algebra lessons and various scoldings at the blackboard’s of schools and on the worst, it provides for missing limbs, back aches and frozen pets stuck ticky-tacky to the frozen garage floor.  I would make it up if weren’t more common than I wish to remember. 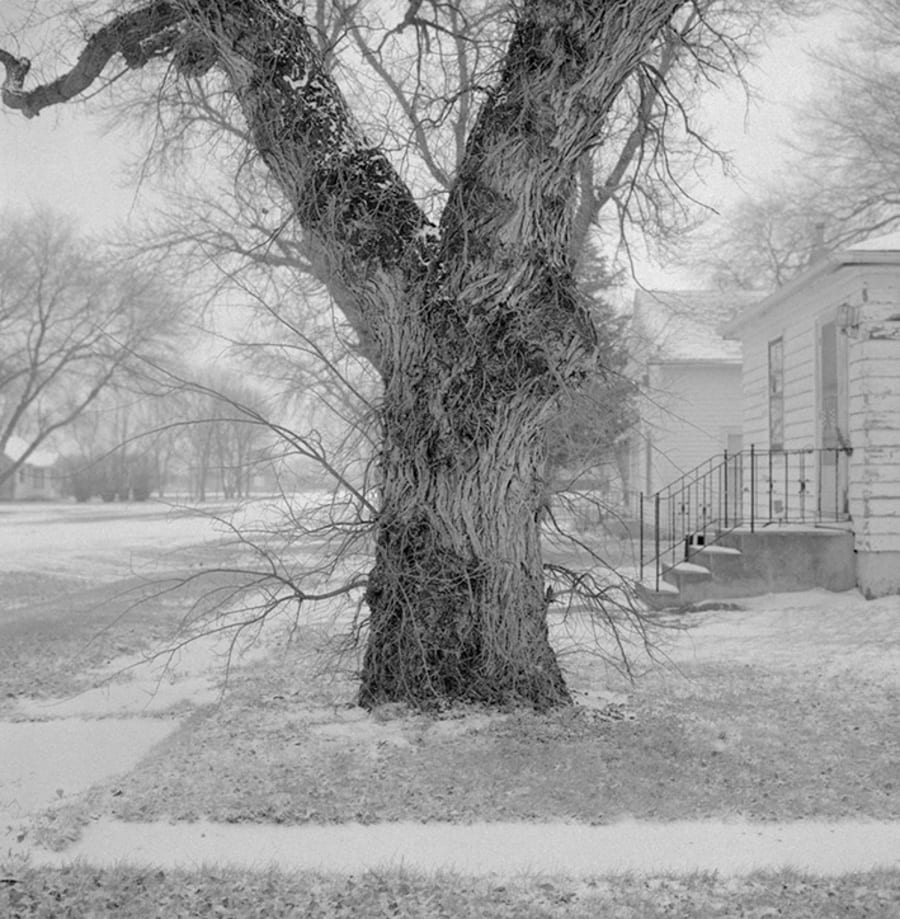 Winter provides a dysfunctional echo chamber in which once a voice, thought or audible emotion is cast into its bleak atmosphere, it freezes, caught by the moisture in its tiresome fiber and within seconds, it halts and cascades to the ground breaking into a million tiny splinters of its former self never to re-combine with the thaw of spring. Winter is for all intents and purposes horrible, pretty for a minute, damnable for a lifetime. Those of us that escape its clutches and feel a more temperate climate in the months of November through to April rarely return to its embrace. Visually and technically for photography, the season is something of a conundrum, it is firstly a phenomenon that catches our impassioned attentions but it is also incredibly loathsome to be captured on film without the pushing and pulling of f-stops- its snow-blinding presence rarely working in tandem with the correct ISO. Further, its freezing tendrils lock down any device that bears the weight of the word “digital” in its nomenclature and finally if given a chance, it will snap the celluloid in any number of analogue cameras just to hear it break. I can think of more adverse ways in which to capture an image, but winter in any of its guises is the champion of my discomfort. 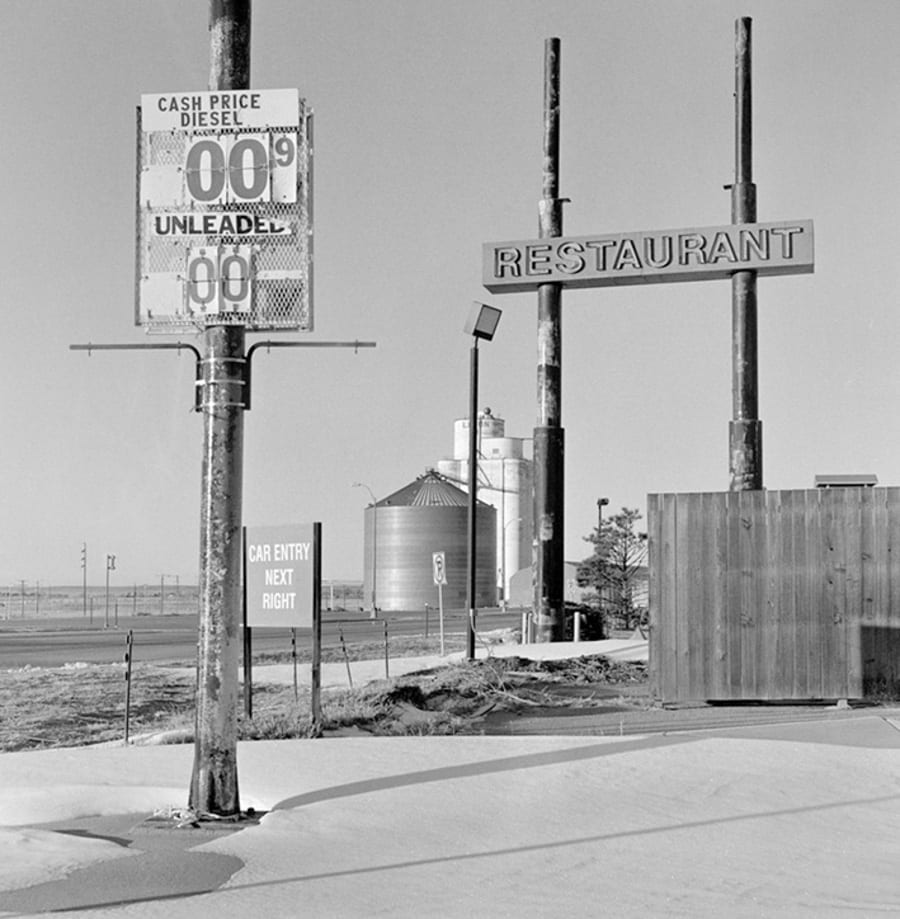 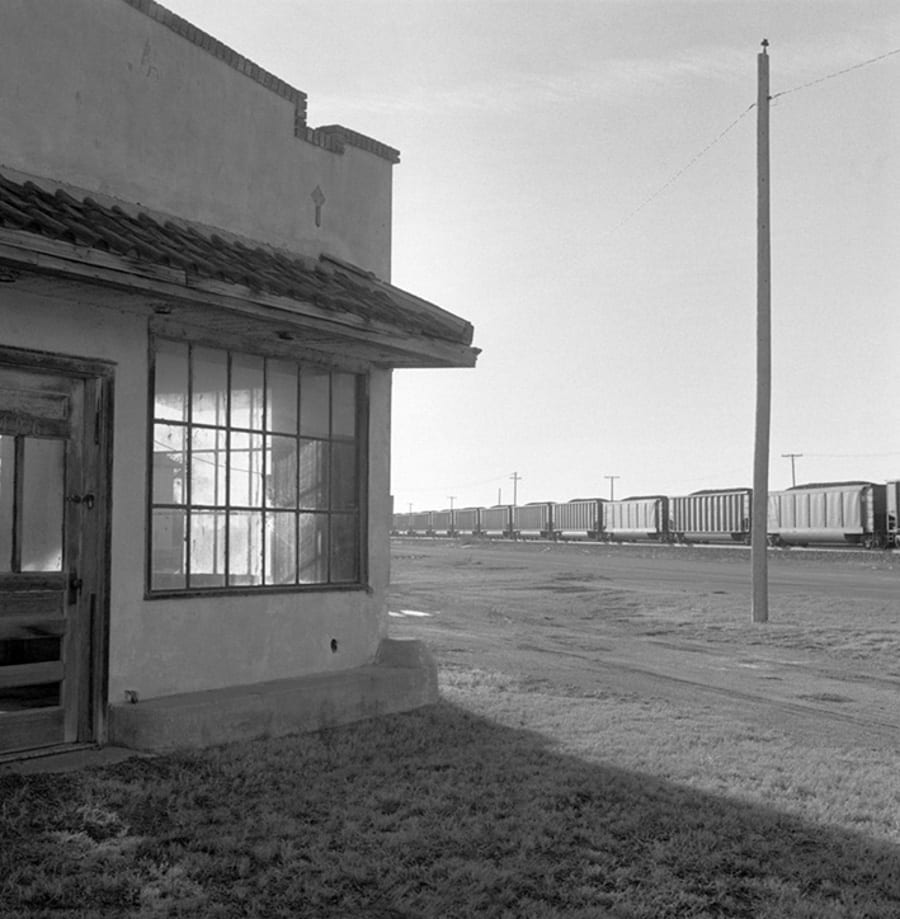 Gerry Johansson is at home in these conditions as he teases out image after indelible image of the wet, cold and white nightmare. I find him contemptible in so much as he has produced unequivocally the greatest photography project on winter yet and one of the books of the year in one sutured move. Stieglitz and Adams be damned, every photograph in here is a winner and that in and of itself is very important. “American Winter” on MACK is a solid thick-bottomed book of a pure and desolate beauty and I find myself hating my detached retinas in this haze of static and noise as I look at the triumphant doom of winter in his photographs. 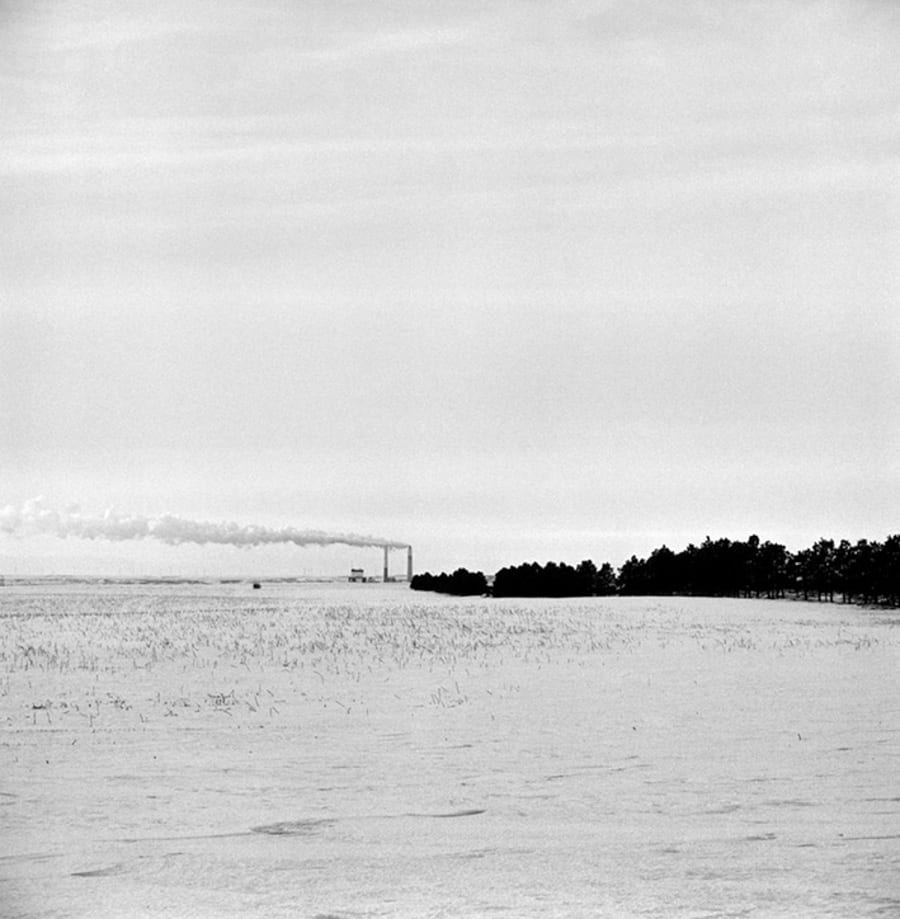 “There are hints of the darkness just kept at bay with the references to gas stations, petrol dollars, school shootings/guns and the Military and the tireless and ravishing decline of America’s lost “Main Streets”, but they are illuminated like a pair of unfamiliar feet just behind the drapery of your intimate bedroom windows- woven and beautiful facades in which a lurking trauma is possible just beneath the surface.” 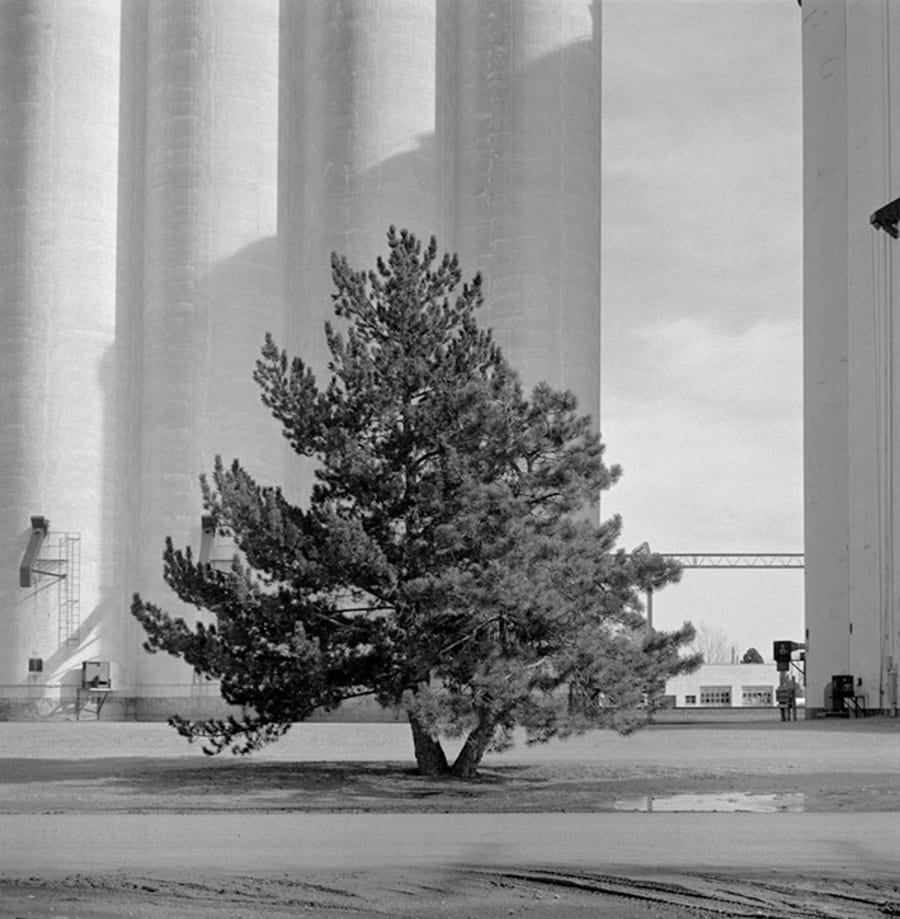 In all seriousness and with some hope that Johansson can muster some Swedish humor over my musings on winter, I can resolutely qualify that this book is relentless and beautiful in equal measure.  Johansson often times gets pivoted into the position of the being the lost and now newly found Beattle of the New Topographics crew though decades after the movement had begun and ended. I think perhaps Mark Ruwedel is the other missing member of that hysterical miscalculation of lost membership. Though some resemblance through repetition and monochrome structure are easy to ignite this position, with the calcifying effect of still architecture and homes and scenes devoid of people, there is something at work which is perhaps more impassioned than the original American NT fab four-Adams, Baltz, Wessel (RIP) and Gohlke.

There is a romanticism in Johansson’s work that eliminates the formerly mentioned dispassionate post-war American movement, even if that movement found itself resounded in smaller cells in other countries such as Germany and the Netherlands. Ed Ruscha and the Bechers are certainly an informed point of departure for work like this, but I would not hesitate to say that what makes Johansson a bit different is that even while handling metaphorical concepts such as the end of the American Empire through the American winter, it is not done so on a complete and cynical come down and is also not too precious as to serve only the conceptual world of art photography and its false promises of marketability through the production of misery or failure. There are hints of the darkness just kept at bay with the references to gas stations, petrol dollars, school shootings/guns and the Military and the tireless and ravishing decline of America’s lost “Main Streets”, but they are illuminated like a pair of unfamiliar feet just behind the drapery of your intimate bedroom windows- woven and beautiful facades in which a lurking trauma is possible just beneath the surface. 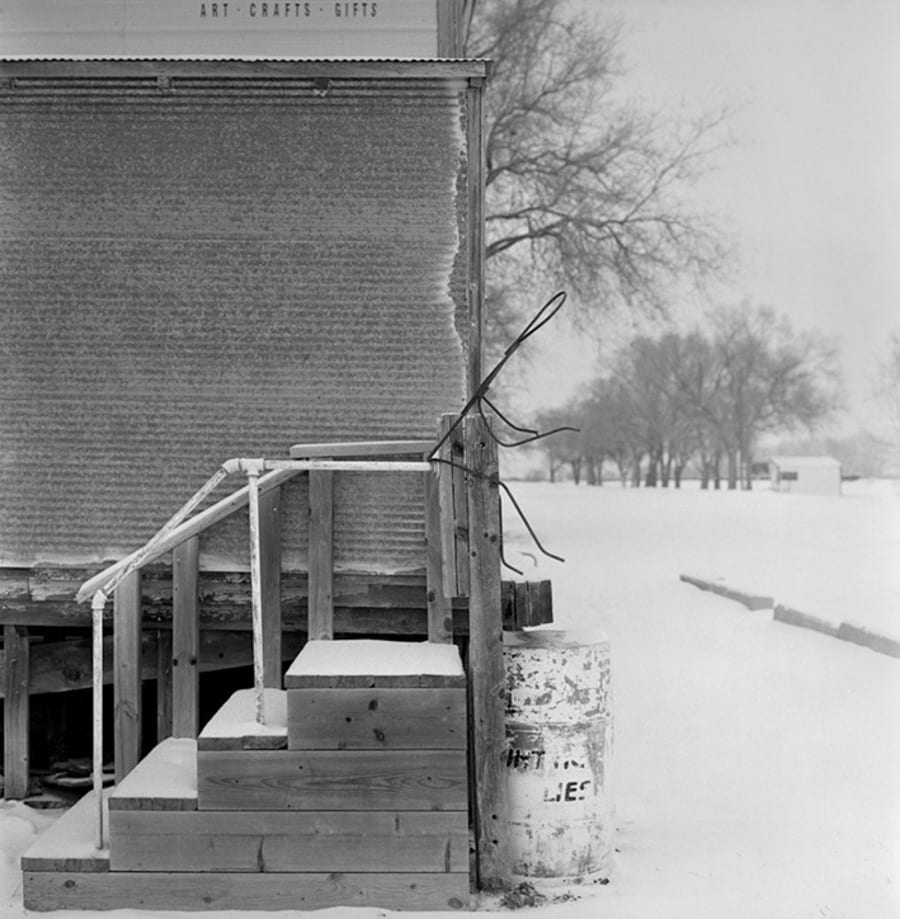 What American Winter is full of is a strange intimacy in book form-the images are printed small and in squares and each frame occludes generic observation. Johansson is literally feeling each frame out to their edges from their center point. This kind of work and especially in this kind of volume almost starts with the idea that the project, especially the book MUST be big and full to accompany a similar ego, though often suffering from a 60/40 split of decent to mediocre or worse number of images that are simply fluff. Though Johansson is no stranger to larger voluminous projects, it is important to consider that the impetus for his production is simply that he makes incredible photographs and is a seasoned veteran of his art-each image has purpose and each image gives gravitas to the whole.

For the reasons mentioned above and for the sheer audacity of nailing every image in this book and for casting a sideways glance both at winter and at America in a time of tumultuous potential empirical decline, I salute Johansson for delivering. This book could have gone many directions, could have fallen into the pit traps of saturation of mediocrity, but it didn’t. I know these ghosts of winter. I recognize the slip of small Midwestern towns into a seasonal finale which speaks volumes on the incredulous theater of American politics at present and I lament its passing through the wistful and brilliant observations of a Swedish traveller to the once land of plenty.