“It is often adorned with children whose levitated mass suggests an ode to Gericault and the “Raft of the Medusa” and it is adorned poorly at times with spray paint graffiti reverberating hymns to Brassai and John Divola alike. And yet, it is never asked to be a ping-pong table…”

The arc of a narrative in written book form often times swings in a formation similar to a film. It starts slowly and gradually rises to a hockey stick crescendo before being dropped sharply into a denouement left to ride out the last moments before it ends in contemplation and the tying up of loose ends. It shares a similar rhthym to certain biological actions, notably sex. When the point of climax is reached, the story folds in on itself like a body and slumbers onto non-existence and finality. This is not always the case in a photographic book. I would not hesitate to say that it is even rarely such an affair. Photographers, for all their indebtedness to the visual components of cinema, in particular their use of protagonists and mise en scene selections would leave one to think that the conceptual framework of their books would also include a story arc or an intended direction. Sadly, this is rarely the case, which is why a good number of photography books lack anything other than being read in a “image block” formula. Cinema is not the necessary guidepost, but there is a a heavy shadow that it casts, like literature over an audience’s ability to “read” images. Photographers tend to ignore this, even in the documentary tradition for reasons unknown.

When I mention “image block” formula, that is to say that the idea within is simply a host of components squeezed between two endpapers and some cloth boards in which the title of the book alone is supposed to save it from the process of a compliant conceptual or literary or tight reading. You can add archival reference points, make allusions to works by other photographers and perhaps even consider duration as a portable notion to sequester hidden agendas in a political realm within the pages. These components are all good measure, but when they are used piecemeal to levitate a work of a disorganized visual mass into the enduring notion or purpose of the book format, it can be a chore for a reader or enthusiast to work their way through why you are making a book in the first place and not simply staging an exhibition in which the forum of consultation lends more credibly to the images en block. There is a huge difference between the wall and the book and to this day, even with the photobook explosion, we are left with 90% of books so poorly edited and purposeless that it exceeds interest to bother trying to define their points of worth and sadly it seems to get worse by the year with more unwarranted and poorly thought out editorial values.

As a point of departure to cinema, but not perhaps to duration and towards the trigger for coherence, I am going to discuss through the example of one book how easy it is to avoid the pitfalls of a poorly produced or poorly edited photobook. The title of the book is “TTP” by Hayahisa Tomiyasu. It was the winner of publisher MACK’s first book award for 2018. I have to admit, I was skeptical when I saw that it had won. I only saw repetition from the screen before holding a copy. I received the title along with a few other forthcoming books to review and realized quickly that I was wrong in my pre-judgment. The book does one thing and it does so magically. It shows the life (and suspected death), in a philosophical set of terms of a simple ping pong table in Leipzig, Germany photographed by Tomiyasu from the exacting simulacra of his tripod and 8th story window from which it observes the goings on of the leisure center in which the table is a totem of fixated dialogue and ritual between Tomiyasu and a number of residents. The book examines a possible narrative/life of an object and does so through a construct that is projected upon by the viewer at large, but not without an agreeable possibility. In short, we observe the life of an inanimate object and the arc of its story actually moves in a literary or cinematic way without dialogue etc. In a way it’s a new silent film dissected in frames.

“In a dialogue where it is often difficult not to mention “medium specificity”, it would be fair in jest to contemplate why photography’s utility is toward change and simultaneously toward stasis. Stasis is where comfortablility lies, but this position also breeds contempt.” 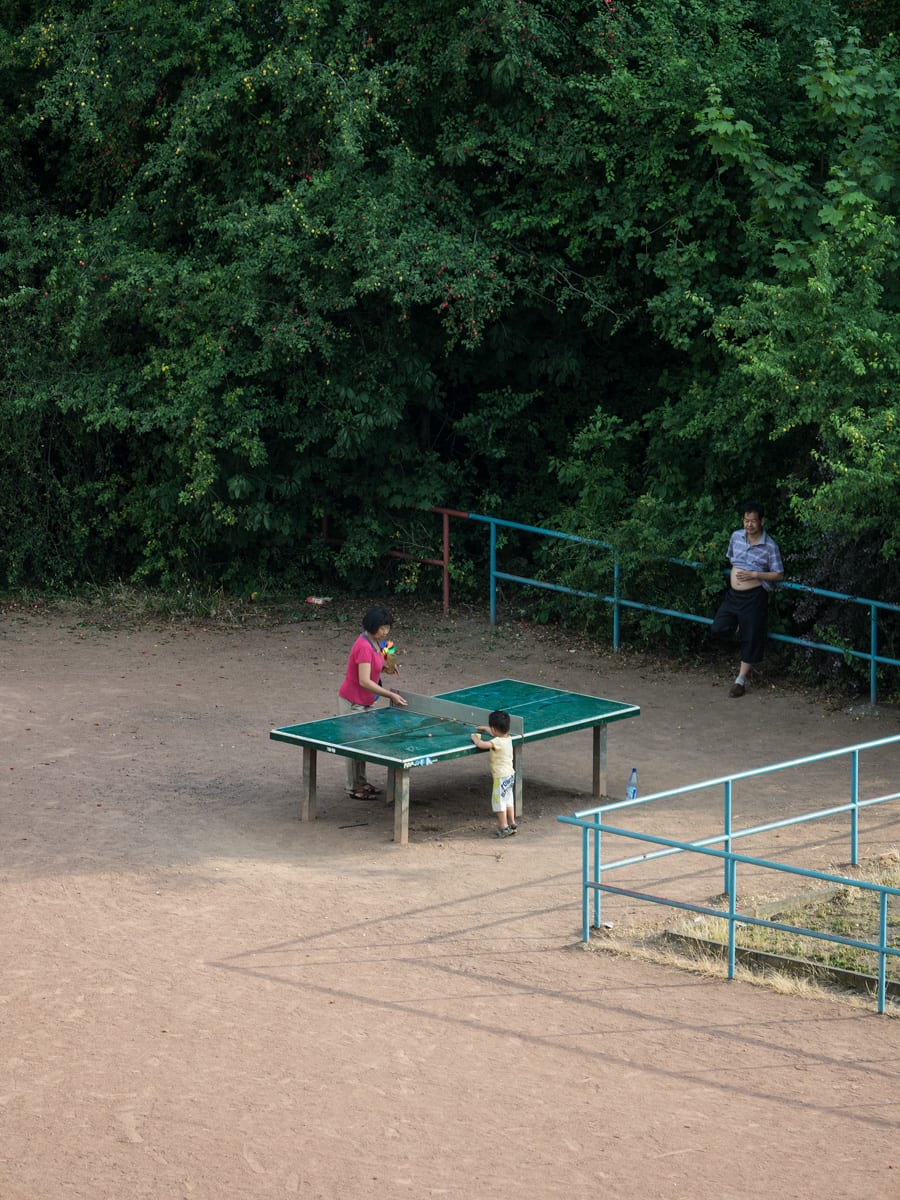 The table is a point of observation and although I speak of cinema in the preceding paragraphs and discuss of its disavowal here (for fair regard to what it is not in medium form) in subsequent verse, I think that the indebtedness of the table or rather of the image of the table occupies is quite clear and is sustained not only by the host of actions that occur in and around its (thought to be) immovable presence, but also relates to a cinematic or literary story arc in the sense that though “fixed” to the ground and the point of interest for the community, the table itself becomes the protagonist and in doing so is set upon a journey in which it leaves the camera frame twice, and that in itself is a point of dialogue.

The frame stays the same throughout most of the 260 pages of the book. There is some amount of slight change of the apparatus’ position throughout, but it is clearly intended that these incremental shifts are simply indicative of the time that passes throughout the making of the work and are not meant to be filtered out as a-synchronized to the structure of the book or the period of 5 years in which it was made. Over this time, the table endures countless struggles upon its “personage”. It’s self is levied against the intrigue of many school children, family BBQs (of all race and possible political affiliations) and exercise enthusiasts, no matter how poor their form. It suffers the inimitable cold of a German winter and rallies against the mosquitos in the warm summer breeze and the deluge of spring rains. It is asked to be a perch, a drink holder, a mattress prop, a bed, a diaper changing station, a laundry washing aid and a kite repair station amongst other manifestations against its character. It is often adorned with children whose levitated mass suggests an ode to Gericault and the “Raft of the Medusa” and it is adorned poorly at times with spray paint graffiti reverberating hymns to Brassai and John Divola alike. And yet, it is never asked to be a ping-pong table and so begins the reverberations of the long strings of the violins playing its epic struggle to the ears of those that will listen. It succumbs to football, basketball, boxing, cross fit and bocce ball, ballet and sun bathing, archery and babysitting, but never ping-pong. And these are but a few of the reasons that the table must excuse itself.

When the environment from a window position remains relatively unchanged over a long enough time, after the atmosphere and elements are counted, one begins to notice only differences and not the banality of the unchanging frame. The latter is somewhat against photography’s (another thing like the table) general discourse. In a dialogue where it is often difficult not to mention “medium specificity”, it would be fair in jest to contemplate why photography’s utility is toward change and simultaneously toward stasis. Stasis is where comfortablility lies, but this position also breeds contempt. Therefore, the medium specificity of photography is a monitor of change, which then becomes dilute in a sea of indexicality and the other often abused “frozen moments” specific to the medium. So, its general purpose is a flux of anxiety between the two conditions-the intent of the operator to see(ize) change or event and the requisite outcome to freeze or capture it in a frozen moment/stasis. And it is no different with the work of Tomiyasu and his living ping-pong table, which is able throughout the story to disappear and to move into different positions just outside of his window. No recourse as to how it is moved is given until the end of the “film” in which the sad lamentable and ping-pong disavowed table is lifted by a belly harness (like a horse onto a ship) away from its function as communal gathering places to frontiers unknown as if to say that its life were over or its presence unnecessary to the community of familiars-the bond created with the persona of the ping pong table forever dashed upon the rocks of uncertainty.

“So, its general purpose is a flux of anxiety between the two conditions-the intent of the operator to see(ize) change or event and the requisite outcome to freeze or capture it in a frozen moment/stasis.” 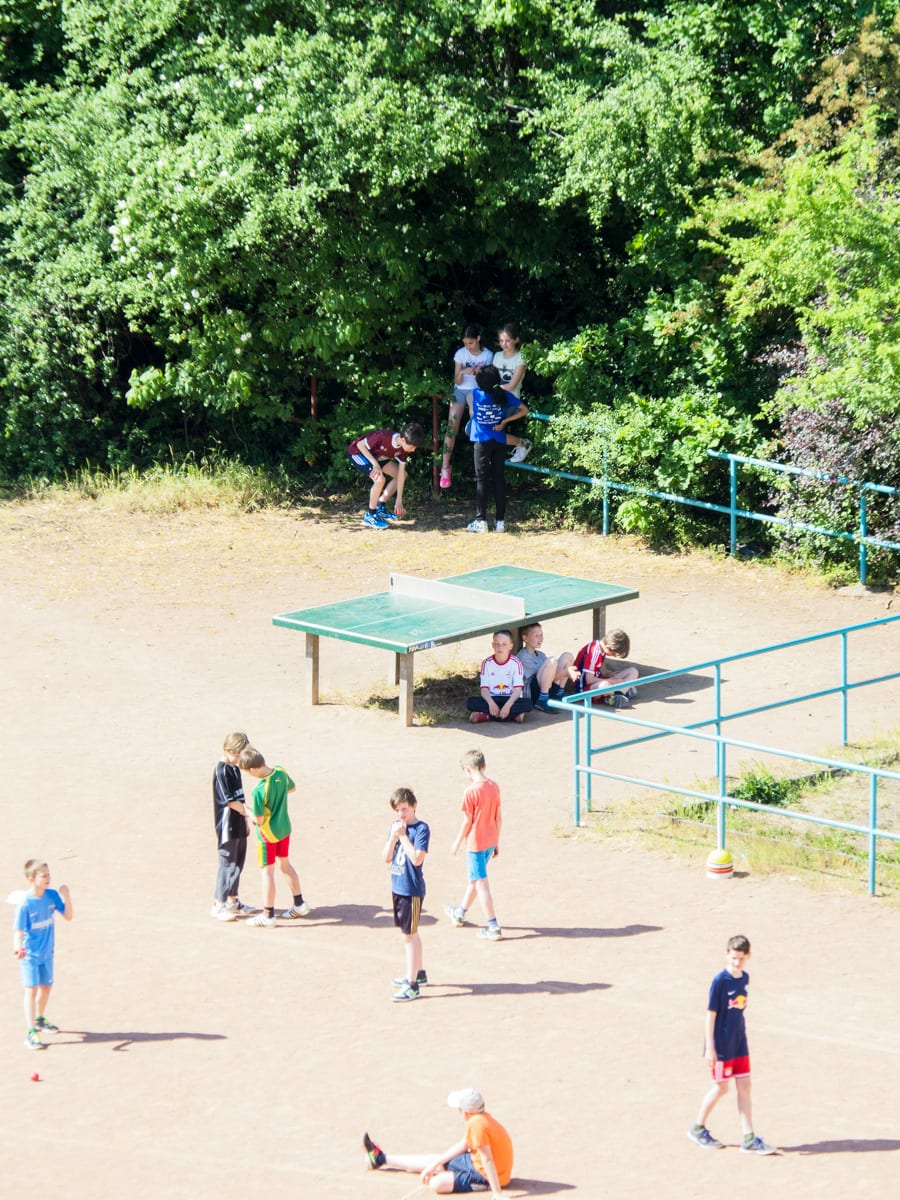 Windows on the world.

The beginning of photography is indebted to the window. Without the employ of the window, Nicephore Niepce and Jacque Louis Mande Daguerre would have fumbled with the time it took to make a cohesive impression on a light sensitive surface in an outdoor environment. It is a sentiment that explains much, particularly in Daguerre’s case about the nature of the camera as an apparatus of voyeurism for the man with polished shoes. Within the confines of an interior space and with the apparatus stable and focused on rooftops, shoe polishers and marble busts, the operator was able, with the aid of the window and all of its metaphorical retro-intent to make images which would develop into the medium of photography.

The window as a portal to the outside world, but also as a vantage point and barricade from which a photographer can hide was not only indebted to photography’s beginnings-its vantage points and voyeuristic qualities continue to embed itself in the culture surrounding it. Ruth Orkin, Carl Van Vechten, Sigismund Bluman, Marry Alpern are also photographers that leaned heavily on the window frame to observe, analyze and count moments in time from behind the lens and behind the veil of security at a distance. This is another important aspect as it relates to the fixity of the window frame-the debt that a photographer has to the confines in which he or she perches secludes their presence, but also imprisons their self to a small degree in which the time necessary to “strike” or make images is made possible.

All of this is found in TTP and the questions raised about how to employ a narrative based on a non-human presence and the resulting discussions about duration of observation and what floats in front of the “frame” of the window are some small elements of the larger book. It ties together so many elemental positions about photography that it becomes hard to ignore once you spend the time with it. What at first appears banal and unnecessary begins to present questions in a hushed and ruminating series of questions regarding objecthood, the act of looking and the stringent stranglehold of time dripping through and around our lives. It is successful in its concrete and uncompromisingly steadfast investigation. If you think about it, it is a quite rare and chance-oriented publication. It is daring in its repetition and its excellence lies in the author’s ability to focus on narrative and dialogue without a word being spoken. Spartan in text and elegant in delivery, it is one of the more successful titles of 2018 despite my initial lack of enthusiasm from the distance of my screen window.