“Vandalism” is a way in which to authorize or sign off on a negation of agreement of form and intent. It is to suggest that at its heart, what vandalism does is to distort the fabric of time in appearance governed by the individual”

Crypto-architecture is not purposeful on the plane of first person experience. The unlocking of its mechanism is seen more as an effluvious gateway or portal to another condition, if not world. The spectacle that it presides over at a distance is ensconced firmly in what it is not-the duty of an unfit or adversely corollary appearance. Often ruinous, lying in hostile decay, the historical mode with which one at first assesses the presence of these structures lends nothing to of first-hand experience and in this capacity- the edifice becomes easy to remove oneself from without further thought.  The indexicality that a recorder of these false monuments presents is simply a lark, a giveaway to false pretense. It would be presumptuous to assume that their incongruent archways, failed cornices and peeling paint are uninhabitable and without the consequence of documentation. Sequestered within the chipping concrete and exposed rebar awaits a transition that very few visionaries can expose. H.G. Wells, H.P. Lovecraft and Sun Ra are but few of the prophets that could deconstruct and disseminate their value in words. In image, the list is slightly longer and perhaps more obtuse-Maxime Du Camp, Clarence John Laughlin, Francis Frith, Bruno Braquehais, Richard Nickel, Sophie Ristleheuber and John Divola. It seems to be mostly men who find solace in desolation.

“Authenticity in its most sincere guise governs that which cannot be compressed against the weight of time. Authenticity must win an argument against what it is, what it is like and what is its imitation. This is how the sands of time bury the latter two” 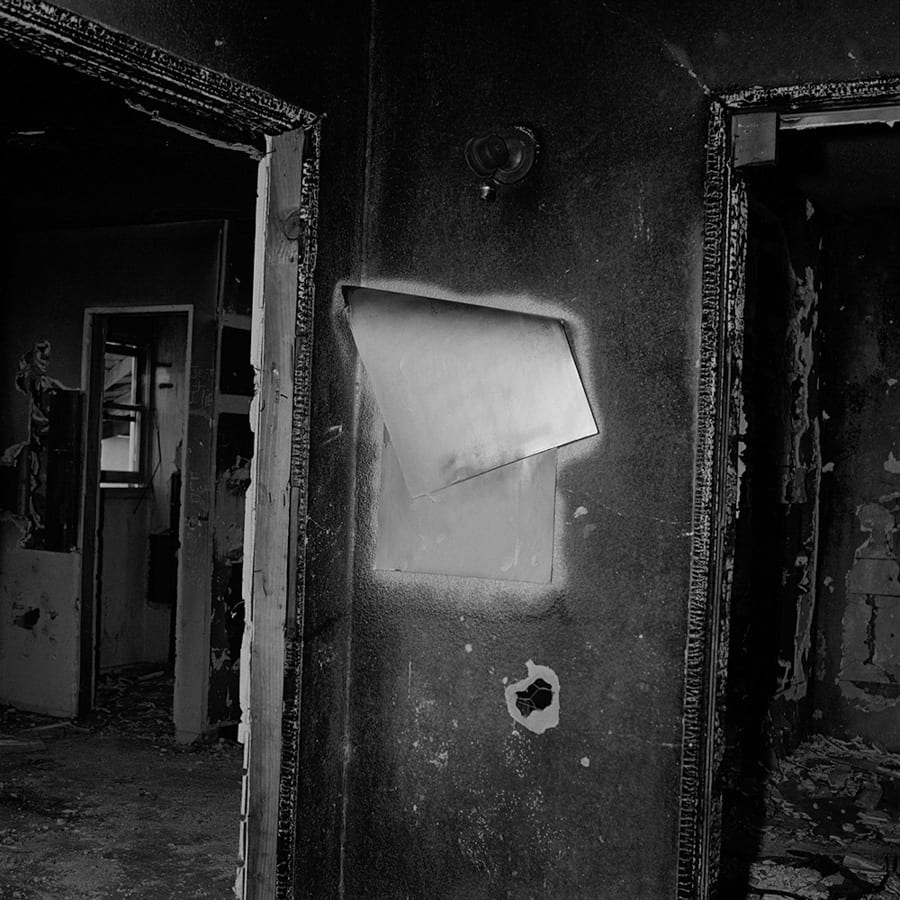 John Divola has often been acclaimed as one of the grand pioneers of conceptual photography working in the American West. Though his work is conceptual (starts with an idea as opposed to functioning on photographic automatism without intent amongst other loose principals) it is not ungoverned by the playful possibility of photography and place with an accord of memory, fascination and the false paradigms of misunderstood innuendoes. For example, when speaking of indexicality, Divola speaks about authenticity in photography-How a certain mindset informed other photographers of the 60s and 70s whom in their quest to observe history and their place in it by documentation made work in which their hand would be unseen. To distort or challenge what they observed by intervention would promote dishonesty or inauthentic behavior. That is to say that in an attempt to observe event and place, these photographers could not intervene or be part of the image, but would simply to float on its periphery while making notes in image form. Divola, conscientiously rebelled against this when asserting his presence within the space and the flow of time in the architectural environment in front of him. He chose to intervene, to become part of it and to question the paradox of what time and monument are to indexicality and observation. The hand of the artist was present and it shape-shifted the atmosphere of the image.

Authenticity in its most sincere guise governs that which cannot be compressed against the weight of time. Authenticity must win an argument against what it is, what it is like and what is its imitation. This is how the sands of time bury the latter two. In Divola’s work we are, conceptual art aside, reminded of mortality, of remains, but also of portals, illusion, cave painting and the general will of an individual to define his or her reality and surroundings. Each of the silver spray painted marks is a strike against time and mortality. Each painted corner is another way to understand infinity and the possibility for dimensionality and escape. “Vandalism” is a way in which to authorize or validate a negation of agreement of form and intent. It is to suggest that at its heart, what vandalism does is to distort the fabric of time in appearance governed by the individual. It is to challenge the domineering metering of authenticity for the sake of appearance by reminding the viewer that the license of form is within the hand of the observer/intervener and not the note-taker. ”Vandalism” on MACK is one of 2018’s finest titles. It surpasses the illusory loose ends that conceptualism dresses itself up for instead giving license to a firm, but obliquely recognizable intervention of time. Highly Recommended.