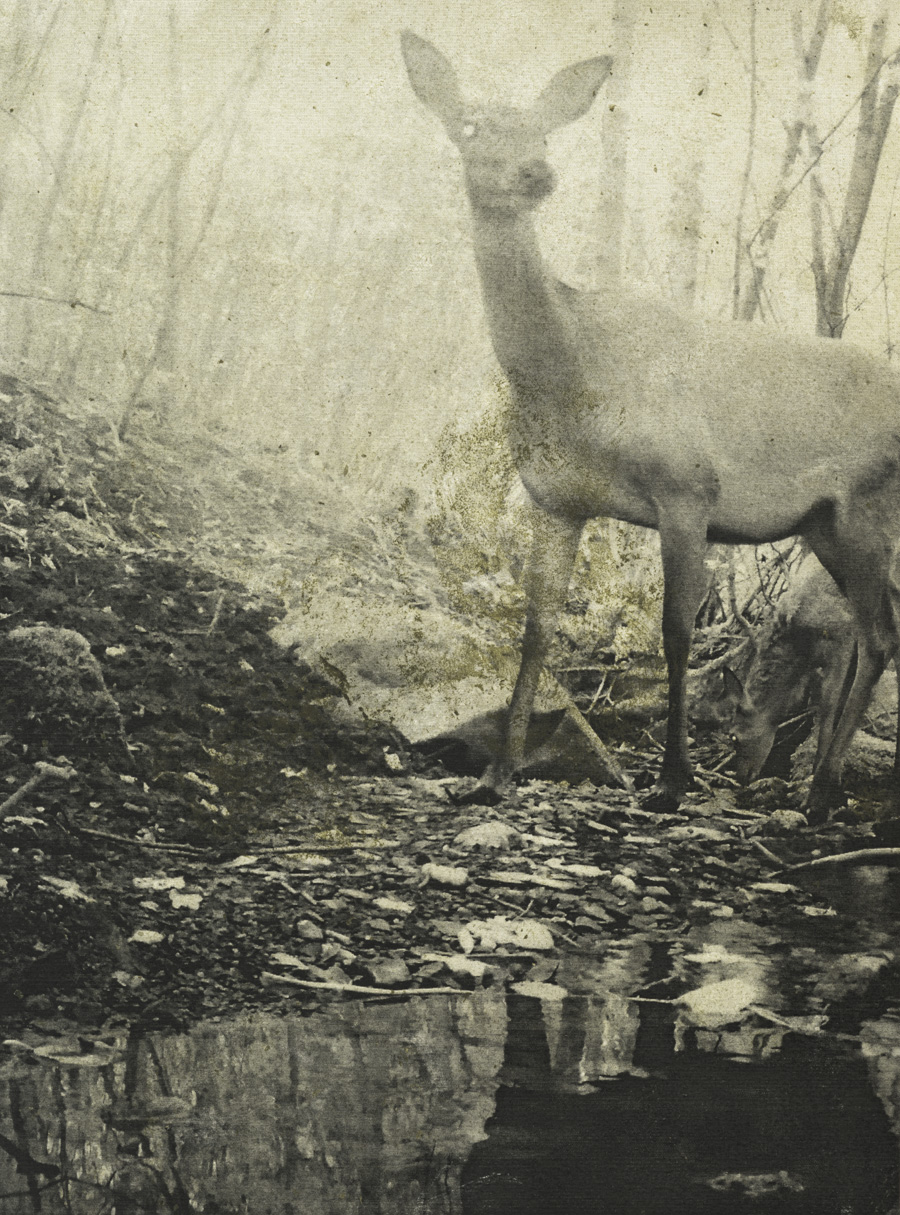 There exist two worlds in which one is never completely considered as visible, but rather spectral. One world is that of the diurnal in which the sun illuminates movements, moments and the audacity of life rummaging through both ravine and concrete in which time and its frenetic capability is displayed without true regard for its fleeting potential, almost fixed by molten plasma so many years away. The other, the spectral world is that of night. Both exist in equal value, but the spectral exists in half-sight and anticipation for movements that are more audible than seen. The cracking of a sapling under mud-caked and cloven hoof marks a progression of lurid possibility, the promiscuous entanglement of fear and a recourse to a dangerous meeting which are never fully developed within eyesight of the diminished foreground from the perspective of the listener. This is of course about perspective and sensation. These experiences bear the uncanny weight of dissonance before visualization-the morass of the hidden nexus of a world that cannot be controlled the same as it is within the ruminating experience of daylight. There are moments in which the recognizable refuses to form without the aid of something that towers by process of its ability to illuminate and it does so only for the briefest of moments. 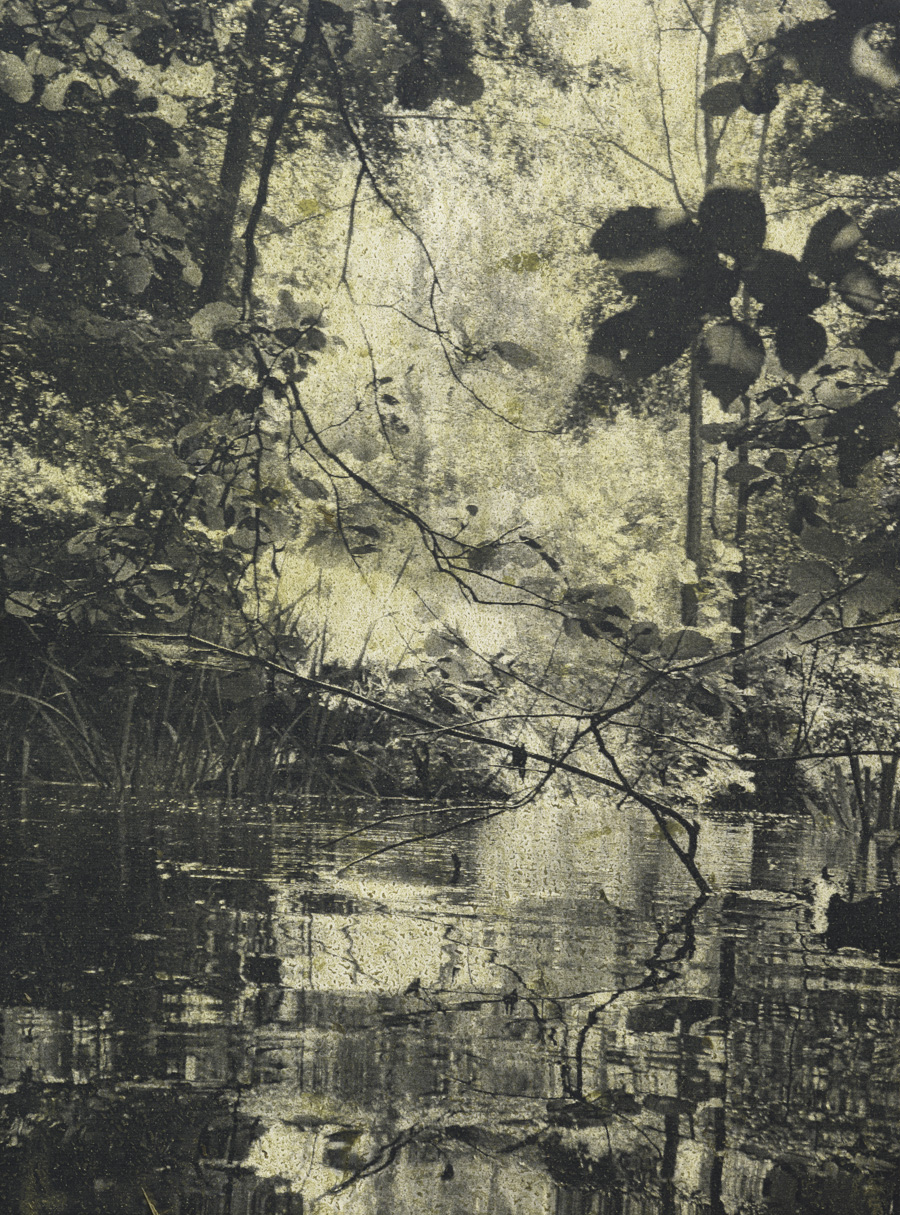 The history of night and flash photography is jagged and punctuated along the history of the medium’s timeline pinned at peaks by Herbert Mason during the Blitz of London and perhaps in rudimentary form by Brassai just a few years prior. We can stretch the lineage further back to astronomical images by Whipple, by Draper and by George Shiras the 3rd whose night time flash investigations of fauna in America were recorded in a large two-volume set entitled “Hunting Wild Life with Camera and Flashlight: a Record of Sixty Five years’ Visits to the Woods and Waters of North America” (1935) in which each volume is positively odiferous of magnesium and near blinding in its scale of contrast. These histories are but just a few of the peaks of nighttime photography in which the operators had battled to technical pitch the oppressive nature of darkness while making images concretize. 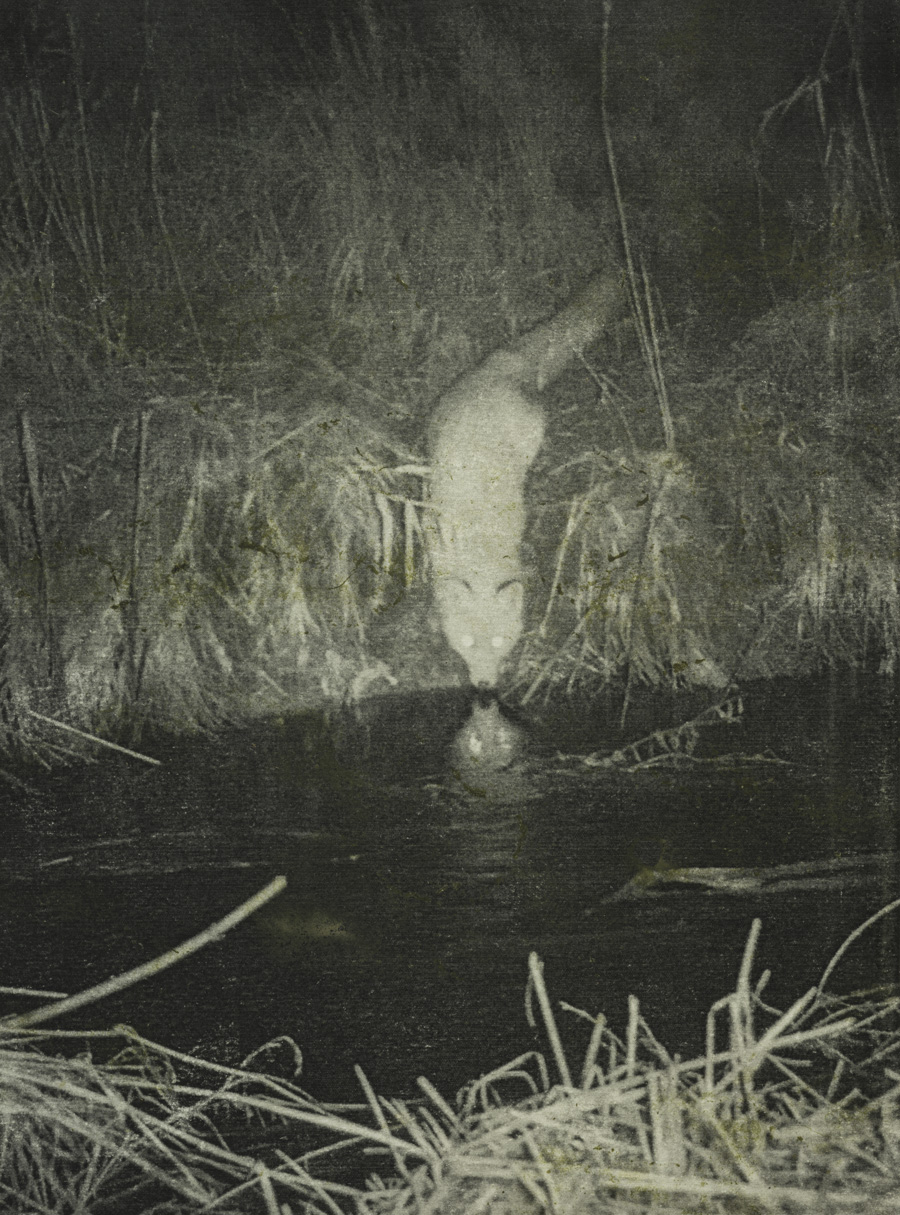 Stephen Gill’s book “Night Procession” is an opulent discourse within the conversation of night, wildlife and also dissonance. The first persuasive argument for its inclusion into the aforementioned timeline is that Gill competes heavily for a top tier peak position within the canon of night photography’s history due to the design of his book and its rigorous discourse with the beautiful potential of the book as object of desire. His volume is meticulously designed to a high standard. It actually separates itself from many other books that have passed my calloused hands over the past years. Cloth bound, printed to the highest order, the images within, even if they were not of value would still attract more than a summary glance by means of its physical value alone. Between the endpapers, it only gets better.

“We can stretch the lineage further back to astronomical images by Whipple, by Draper and by George Shiras the 3rd whose night time flash investigations of fauna in America were recorded in a large two-volume set entitled “Hunting Wild Life with Camera and Flashlight: a Record of Sixty Five years’ Visits to the Woods and Waters of North America” (1935) in which each volume is positively odiferous of magnesium and near blinding in its scale of contrast.” 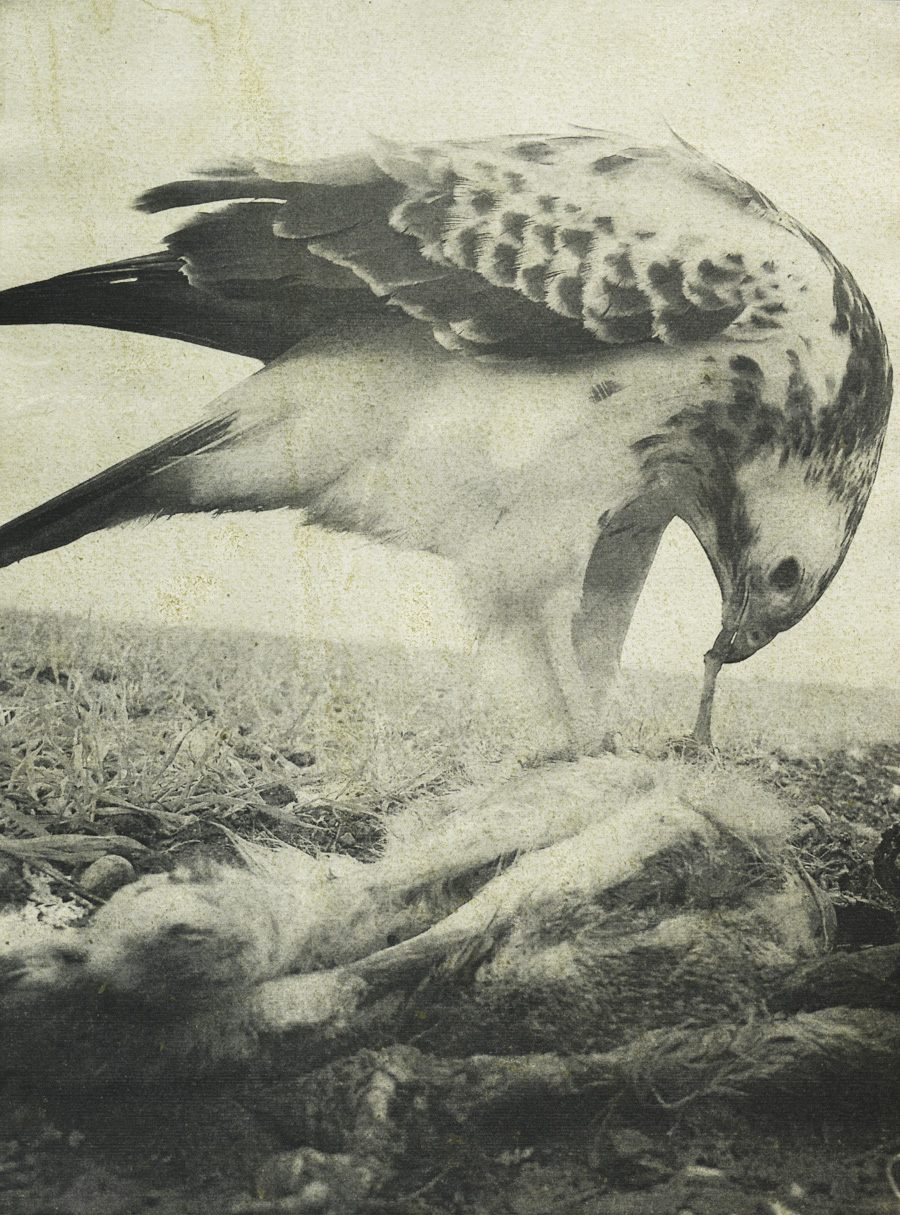 Having been to Gill’s former London Studio and having looked through various bodies of works with him, I can rightfully say that I do not know many artists working in photography that even-handedly exact, almost to an excruciating level of perfection their work to his level of professionalism. Gill prints his work in the edition that is to be sold. He creates portfolios in elaborate boxes and his books qualify to some of the highest standards in the business. I am pointing this out because of his exemplary professionalism and his conscious concern for his legacy. He takes care of his work and in doing so has gone to lengths to ensure that through this process, his peak on the photographic timeline will be ensured. He isn’t creating hypothetical bodies of work on a hard drive that will switch with papers when printed or will be held to a poorer standard by an heir or his own possibly, but hopefully never enfeebled governance much later in life. His work exists and it exists in a clear voice with clear delineation of his methodology. The books are very much apart of this. 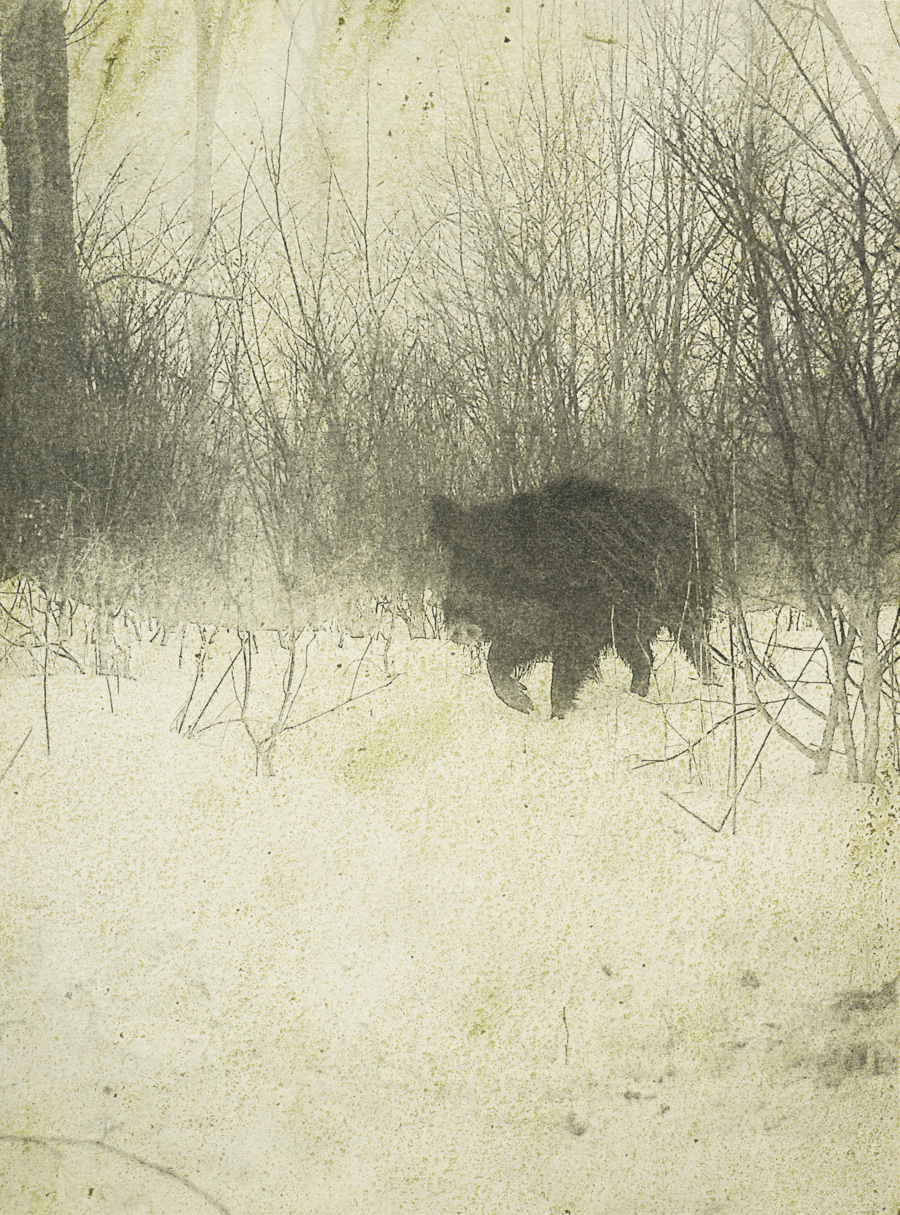 At present and within the world of the photobook market, the fetish call for compulsory participation in producing a book for May, July, September and November has become something of a tired charade in terms of value of product and economy of return. I feel privileged to work with so many books at such a crazy time, but my ultimate concern is the grinding out of not only inferior product, but also that of the novelty/gimmick of form in which their subject takes root. The gimmick in book format is a huge discourse in photography that we are not having, but should. Due to the stateless anxiety in which the world operates at present, artists naturally feel a need to comment on the rapid change of technology, media, and ideas that exist within the conceptual framework of our society. And this has led to the proliferation of photography books being rapidly churned out in which the idea/concept, for better or worse in some cases is meant to single-handedly absolve the poor quality of the book itself. The oeuvre of the photographer/artist thus is pinned up on a metaphorical felt board with different colored tacks over a career. The strong and consistent voice has gone missing. It has gone AWOL along with the blue tack that it should have been hung with in the first place. The use of the gimmick is the greatest superficial crutch of the photographic world at present and it already permeates volumes within the future library of Photopolis. 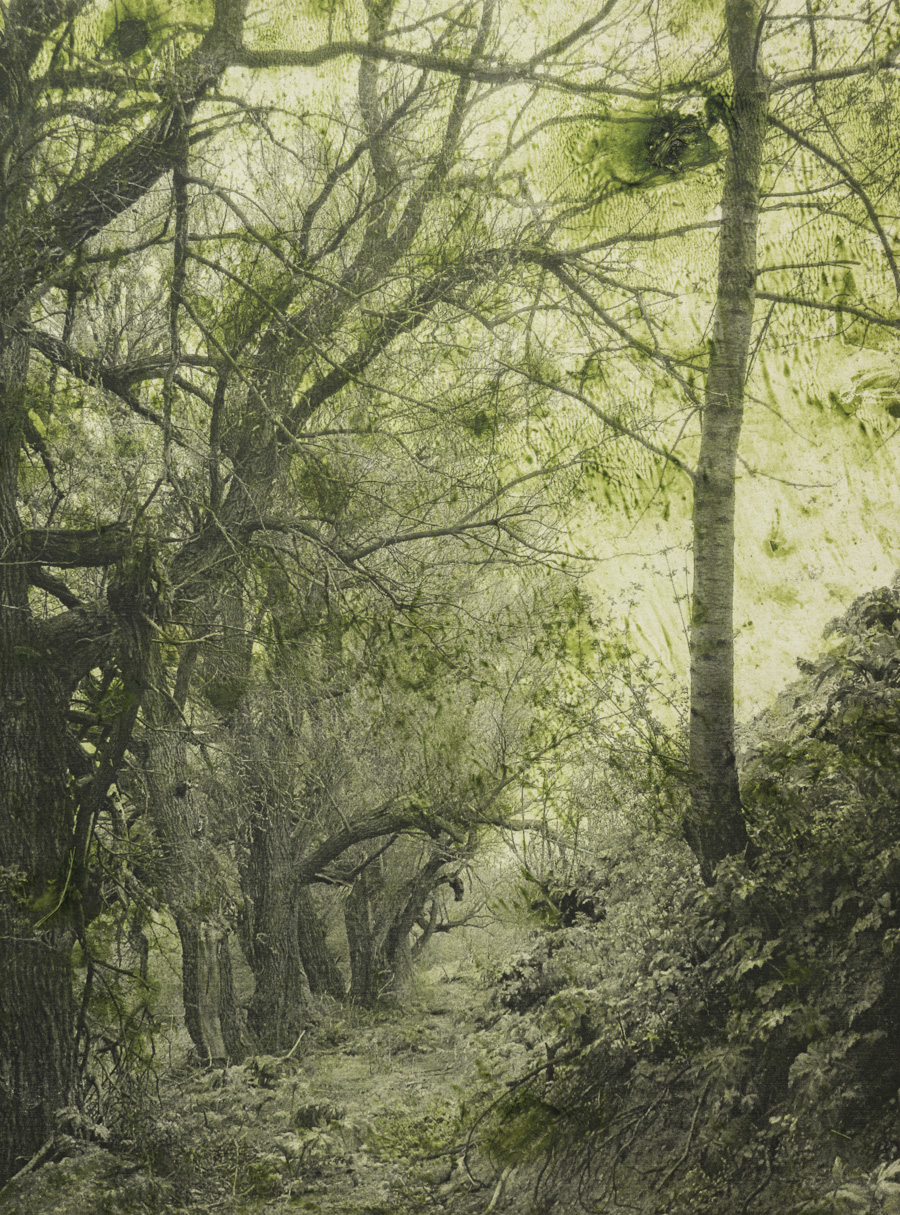 I am mentioning this because one thing that I have noticed following Stephen’s career is that he does not suffer the indignity of this crutch in his work. Though he employs an idea based on often times technical playfulness, it is always sincere and it always comes from his fascination and complete servitude to photography and his way of conversing with it. This fascination is less about the grandeur of sweeping statements about the world than it is about his interest in “what if” and his natural gift to wander. Night Procession is no different in this regard. Outside of its high production value and simple if eloquent beauty lies Gill’s fascination with what he can do with the medium that is not redundant or poorly epiphanic. In book format, his work further upends the irreversible quality of gimmick that might be employed by a lesser artist. Each image is buttressed by an unending sense of continuity. That is not to say that I do not have my favorites or that perhaps if we had a barometer for Night Procession we couldn’t qualify the images in categories of “GOOD (Some Trees/Blurry Mouse To GREAT (Hawk Eats Rabbit Gut, Petroglyph Weevil Etching)”, but that is not really the point. What is important here is consistency and professionalism.  The images are consistent in their production and they are consistent in their value in book format and in Gill’s career. Night Procession continues to strengthen the community for its possibility to exist in such a high standard of production, but it also strengthens Stephen’s career in the sincerity that if offers to an already unblemished output. Further, there is also a great essay/recollection by Karl Ove Knausgård (Author of “My Struggle”). This is possibly the most solid release that I have seen in 2017/18. Its beauty, consistency and value of imagination are worthy of contending for Deutsche Bourse 2019. Highest Recommendation.

with essay by Karl Ove Knausgård