“Iowa as book itself harbors this moored kingdom previously mentioned as a state of internal configuration and a series of fluid and potential possible memories prescribed for others. It is an evocation of sorts.”

Nancy Rexroth’s “Iowa” is a poetic eulogy of a time and place that never existed. It reigns in the kingdom of solitude given to a singular point of view-the operator of which conducts her world through a symphony of blur and arrangements of possibilities. To say her work is a precursor or alike other bodies of work would be a disservice in many ways and yet I find its closest parallel perhaps in the unassuming photographs of Wright Morris-also a poet of place. It would be easier to characterize her work by stand-in of Diane Arbus or Francesca Woodman, but I believe both lack the credulity in which Rexroth’s acuity of personal vision acclimated itself into subconscious territory without her own ego completely running amok across the surface of the image as in the case of the latter two artists. In continuing to contradict my aversion towards precedents or influence on what came next, I would also say that one photograph of a tulip by Andre Kertesz also favors as much natural synthesis to Iowa as does Wendy Ewald’s work with school children. Rexroth’s images and the interiors of mind and place collude in a metaphorically rich field of observation to each of their aims, respectively.

“Iowa” as a book itself harbors this moored kingdom previously mentioned as a state of internal configuration and a series of fluid and potential possible memories prescribed for others. It is an evocation of sorts. The blur of a toy camera-the Diana, edifices the possibility of states in-between that which is visited in front of the image-maker and that that parallels a borderline geographic reality to that of a dream state. It is intentional that this operative device-this theatre of un-reconciled lack of definition suggests a world awash in half-light and grain and incalculable serendipity. The long shadows and pink tones from gold chloride toning add a charisma to some of the images that refute a state of natural observations characterized by “exacting photographs” in which definition or the albatross of relativized meaning gather amongst the storm clouds of what it is to “know” or “understand” each individual photograph. There are only suggestions and moments not your own, yet familiar.

“Iowa is a book of sweet fantasy, which also simultaneously delves into the disquieting tradition of American Gothicism. It shores the imagination from the oppressive behavior of illustration for that of atmosphere” 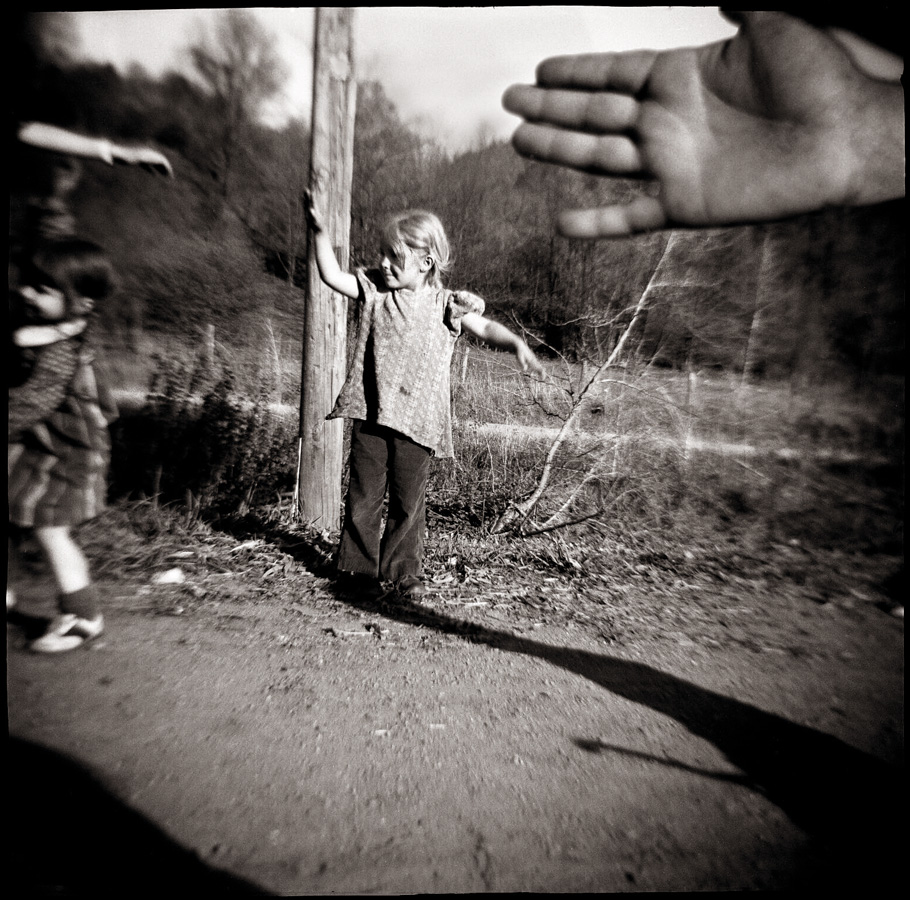 I was lucky enough to meet Nancy in 2000 when I worked for Martin Weinstein in Minneapolis. He had known about the work and the original thinner volume of Iowa that had existed as some sort of mythological book, which was not abundantly easy to find, nor championed widely prior to the photobook boom. Its pink cover with its square shape alluded to a sixties girl band album cover in my mind when I was lucky enough to see the book at the gallery. The stark cover with all intention to understand what would be dropped with the first photograph. As a mid-westerner from a state, which borders Iowa, I was immediately struck by the absurdity of a book of photographs from or about Iowa the state. What I did not understand or what I let my mind pre-fabricate at this early age was that photography and place and more specifically place of mind are illusory arenas of conduct when it comes to photography. I still have memories of “Mother’s Legs” in its diminutive size, elegantly framed sitting next to my desk at the gallery imagining a purchase. Years later, mother’s legs still kick me for not having concluded as my own memories begin to blur at the edges. The exhibition that Martin had shown was Iowa itself. He had contacted Nancy and had managed to get the vintage work for the show along with a number of the original books. I will never forget meeting a few people through Martin. Nancy, with her primitive (on purpose) digital camera and soft, quiet (not unlike her images) demeanor walked unassumingly into the gallery one day for the opening.

Iowa is a book of sweet fantasy, which also simultaneously delves into the disquieting tradition of American Gothicism. It shores the imagination from the oppressive behavior of illustration for that of atmosphere. There is no threat in the case of my reference to American Gothicism, but there are ruins somehow. The houses, hidden behind the bramble in front of the plastic lens, the leaves that pile under the legs of a flying boy now grown older and the empty rooms in which Emmet no longer cackles are held hostage to the autumn fantasies of the uncanny. It is not dissimilar to the feeling of a life embedded with Halloween or the smell of fire in a mid-west winter, all allude to a place in which rivers and myths find custom in their disquiet.

“Iowa” has been lovingly re-published by the University of Texas Press in a beautiful hardcover edition with additional essays by Alec Soth, Ann Wilkes Tucker, Mark L. Power and Rexroth herself. The essays by both Power and Rexroth from the original appear and are book ended with an update. To read Nancy’s words now and then forty years ago reminds me of the consistency in which a mind or vision can exist. The passages are short, but similar in their unassuming, and insightful use of language. It adds another layer of depth that the book has not aged, only the players have and yet by way of word there are only implicit possibilities for ghosts, just possibilities for other words not one’s own. HIGHLY RECOMMENDED.