“I’m intrigued by the contradiction between Laval’s comment that he was freaked out by his meeting with the couple on the bender and his resulting depictions of the car chase, which at first glance seem light, humorous and almost superficial.”

They say it’s Scorpio season. Well that’s convenient, I’m one of them—all sting and sexual innuendo—I guess that’s why I was picked to write this double-barreled piece. Question is, do I have sufficient mental broodstock to rein in this Bp Laval guy in his quest to Take the world in a love embrace!

A few boulders in the way. All just geographics, but I crunch words in France, dans le Grand Sud, Laval is at the convergence of British Columbian mountains and sea, seemingly contemplating the origin of consciousness while running with the wolves in his studio, yet the Johalla Projects venue for this exhibition is in West Town Chicago—which conjures up a bending blues riff in the mind of this cowboy, a prelude to a night partying in some ill-reputed dive or engaging in transcendental meditation with kohled eyelids—dance us any way to the end of love, Lenny.

But who is Bp Laval? In my grandiose delusion before ringing him, I imagined anything from a struggling painter forced to work as a gopher for a clandestine house renovations team of fellow strugglers with names like Ab, Norm, Wilf and Billy-Bob to a huge Stetson-clad, fat cigar-smoking, curly hair-chested and golden mandala necklace-wearing dude, but was surprised right away by his cool softspoken voice—eons away. His grandeur is obviously elsewhere.

Rather than exploring the importance of wilderness in the breakdown of the Canadian mind—which I was kind of hoping for—Laval’s almost trivial close encounter with a cracked out renegade and his girlfriend who happened to pop by his studio to borrow a car jack to change the tire on a brand new Mercedes SUV stolen midway through a four day spree of violence and crime, ending with the couple being apprehended after ripping off several cars, eluding police, causing snarled traffic and colliding with a patrol car, provided the backdrop. Shit happens. Laval picked up the scent, creating a universe from thin air—immersing himself in this almost decadent and depraved ambience, then encapsulating and propelling the undercurrent of violence, fear and erotic tension onto canvas, creating an almost wonderful narrative. I’m pondering whether he risks becoming exactly what he’s seeking to caricature! Come to think of it, these carjacking blacktop road warriors were pretty well complicit, seeding their warped experience into Laval’s imagination. But then again we’re all here just to get it on, so aren’t we colluding too? 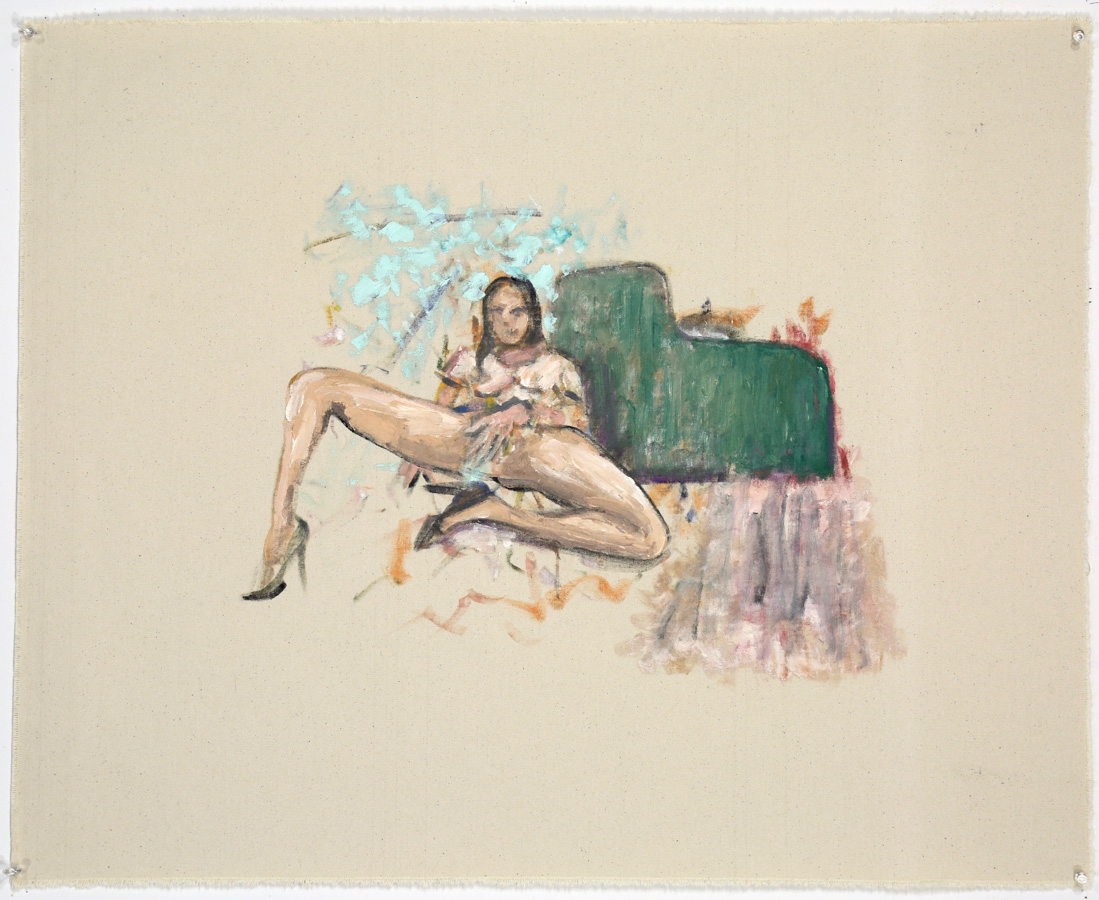 I’m intrigued by the contradiction between Laval’s comment that he was freaked out by his meeting with the couple on the bender and his resulting depictions of the car chase, which at first glance seem light, humorous and almost superficial. I may be losing it here and over-interpreting the genesis, but to me it’s a depiction of the apprehension and flame, repulsion and yet attraction that occurs with happenstance meetings of different worlds—mutations are inevitable and we emerge changed. I’m digging into Laval’s archive to discern any sign of such metamorphosis. I see creatures standing on the verge of precipices accentuated by the void looming above them. I note highly effective use of seemingly simply applied swaths of color, lines and texturing that give depth to these often humorous unhinged yet logically built up universes. Goddam it though, time for this pup to pull out of here, dizzied by all these bare bodies reeling and writhing and acting obscene!

Back to the exhibition. I’m forced to follow Laval as he swings through, taping with his iPhone—which makes me ask myself why the fuck I didn’t hit on him for airfare and expenses to actually see the show in person rather than being sucked into his personal psychodrama from afar.

Chicks on sickles, lovers in deep embrace and blazing cop cars—Laval creates a disturbing emotional wilderness, drawing us as viewers into his bush of ghosts with a sense that anything could happen—a couple doing it in the road, a threesome engaged on a mystic highway, a goddess as figurehead on the vehicle in the car chase. Voyeuristic, atavistic, altruistic. The painting titles are playful, often hilarious, reminding us that we’re all lost anyway in this passion play and nothing is to be taken too seriously. Almost a sense of mutualism and community. I imagine Laval cracking up with laughter in his studio after generating some of these pieces.

As well as doing it in the road, there are musical references everywhere—motorpsycho nightmares, madonnas and two-wheeled gypsy queens and prisoners of the white lines of the freeways. This is A+ cinematography and choreography, with a one-take feeling in the visual representation—such simplicity—with Laval walking us through the events in the car chase as he fancies they unfolded—borrowing the jack, tipped over 18-wheelers and log spills, officers deploying a spike belt and Bp commenting “Hope this baby has run flats”! Now I’m cracking up!
Laval mentions he was thinking about PTSD and viewing such dramatic urban events from the perspective of witnesses and rescue teams and how their experiences could be processed visually—perhaps a hint to what is coming next from this artist after this major exhibition who in a very surprising and titillating way manages to touch ground-zero with our emotions.