“A good number of the images allegedly had annotations written on them such as “not interested in pictures”, “Deceased”, and “Looks better from the ground” written on them”

I am completely biased as I write this review. I have been delving into German photography books recently under the impression that a large amount of the works have been somewhat overlooked or that perhaps I have overlooked their importance. The starting point for my curiosity began when I began looking at the work of Michael Schmidt, which led to John Gossage, which led to purchasing “Deutschland Im Fotobuch”, in which this book can also be found. I was completely taken aback by what I had been missing.

German photography between 1945 and roughly 2000 is greatly overshadowed by the Becher School of photography. Market friendly names like Thomas Ruff, Thomas Struth, Wolfgang Tillmans and of course, Andreas Gursky have an important place in Post-War art no doubt. However, there are seminal German books that rarely get re-appraised. If I had to guess the reasons for this, I would not hesitate to say that the great eclipse of 20th Century political dialogue had much to do with how books were produced in both East and West Germany, but also the grave and obvious hangover of a country shamed into self-denial and sadness had limited the potential for cultural output in a divided nation. This is obviously not a call to empathize with the German undertaking of the war itself, but rather that Germany is more than one or two wars-its people and its artists have struggled to make sense of their own involvement and have been penalized over the last 60 years economically, politically and culturally for their involvement in the war. It’s very easy to categorize a whole country by its mistakes and not its merits. I know this as an American whose people have re-written imperial history since the end of that same war, but not the current series of wars we involve ourselves with, which will be determined by winners, if not corporations.

In the shadow of this former war and in this decline of a nation came a great amount of introspection. The landscape, both political and visible had undertaken vast amounts of change during the last 60 years. The cold war is but one example of this. Cities were divided along with families and ideologies. It wasn’t until 1989 that a new change would take place that would give Germany a chance to coalesce again under the “one nation/ Einheit/Unity” slogan during the following short years. In the years leading up to this and about a decade or so thereafter, Germany had to re-examine itself and come to terms with nearly 6 decades of being a geo-political pawn, the invasion of Western capitalism, Globalism, and the EU, but it also had to come to terms for what it means to understand its past and potentially heal from it or by the very least, accept it. In doing so, artists, writers and creatives began looking into the dusty cracks of a cement-laden political history and have begun to rebuild Germany under the rubric of its possible new totality.

When you begin looking at certain books by certain photographers during the period, you begin to notice a coldness to the work. It was not always this way. If you look at photobooks from the 1920s and 30s from Renger-Patszch to August Sander, you do notice a certain objectivity bordering on the clinical and works that set the modernist tendency towards this objectivity are bound by various typologies that would later be so prevalent in the Dusseldorf school output. A large amount of this output is almost scientific no matter the emotional quality of the images, which sincerely lean towards the cold. The romanticism of early books by Michael Schmidt such as “Kreuzberg” is foreshadowed by the great French humanist tradition in photography coupled with the ghost of August Sander’s rendering the people of a nation in catalogue form. Schmidt’s own work would escape the typological categorization and objectivity for that of the personal, but also the monolithic distortions of time and home as seen in “Berlin nach 45”. “Waffenruhe” and “Wedding”. These books are notable as being case studies of a rather dismal empathy, but “Wedding” in particular began the turn towards the coldness seen in “Berlin nach 1945” and also “Irgendwo”.

“and the figures in doing so create an elaborate tableaux of humans frozen in time in which their intimacy, their worldly belongings and their familial reckonings are contained hidden under the roof of their homes-the interior mechanisms of a sealed dollhouse. Of notable exception to this rule are the few people who look back at the sky. They strangely remind me of the train spotters in “RFK Funeral Train” by Paul Fusco, straight-backed and nearly saluting the camera or intensely focused on blotting out the sun to see the vehicle in which the camera and photographers had circulated”

Peter Piller’s “Von Erde Schöner” is something that was published in the midst of the end of all the 6th decade of post-war living and features lossely some of the themes mentioned above. The book, in general overview, is a series of aerial images that Piller collected from a defunct entrepreneurial venture by a firm who was attempting to sell the images back to the homeowners of German new build housing on the periphery of urban centers. The images were shot from a plane (light aircraft, I assume) and the same boundless repetition that the Becher’s employed for their own typologies is present, but in overview only. They were made between the years of 1979-1983. A good number of the images allegedly had annotations written on them such as “not interested in pictures”, “Deceased”, and “Looks better from the ground” written on them. 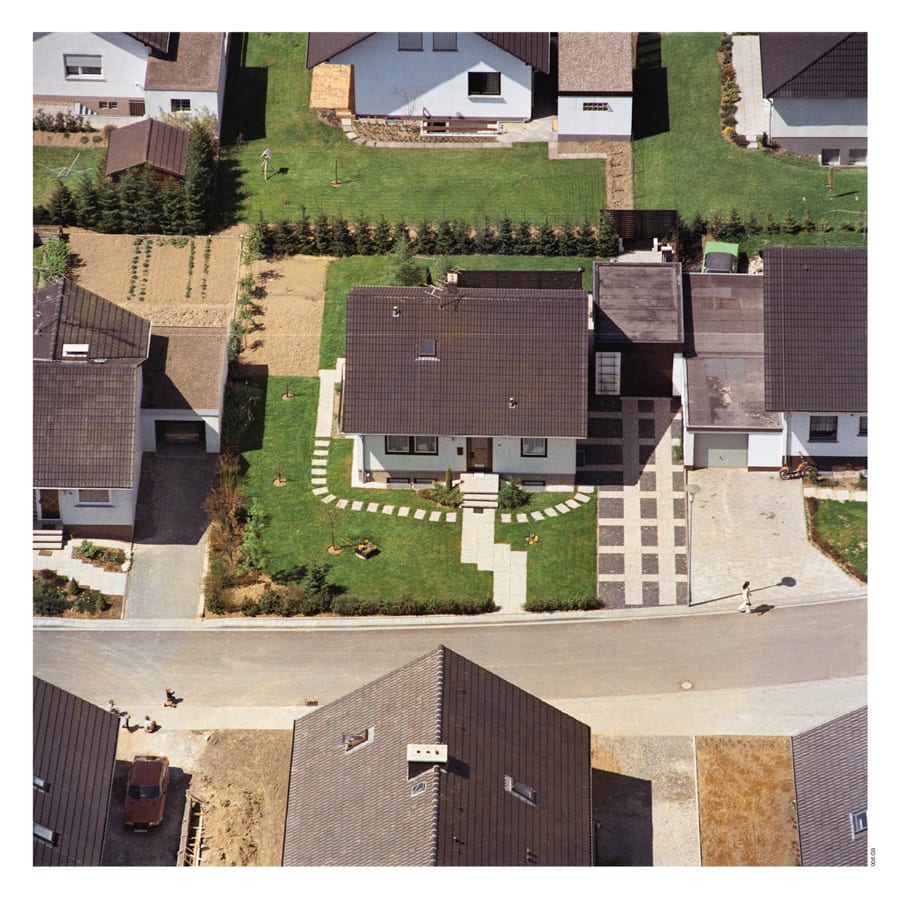 The book also speaks about the idea of the “God eye” or omniscient camera view looking down from above in nearly voyeuristic terms. And importantly, though in beautiful saturated color, there is a coldness lurking below the surface of these images. There is also the exceptional role of the editor/archivist/pre-Kessels collector of vernacular hoards at play to consider.

First, and to explore the lacking pathos found within studies of objectivity, one is confronted with historical presets of the work. Apart from the Neue Sachlichheit feel to the repetition and relative similar distance of lens to subject as seen in Karl Blossfeldt’s “Urformen Der Kunst”, there is the urban sprawl to concern oneself with. Bill Burke, Ed Ruscha, and Robert Adams’ works on the American West under the guise of the New Topographics movement had an effect on some of the German photographers such as Michael Schmidt, Joachim Brohm and potentially Einar Schleef. Schmidt’s Berlin-based “Werkstatt Für Photographie” gave Adams, Eggleston, Gossage and Arbus a place to exhibit, but also lead short programs. The workshop was in effect working with concepts of place in a similar vein to the New Topographics, but distinguished their work by the idea of re-building over that of suburban expansion and the limitless frontierism found in America. Piller’s work would have made an exceptional placement within the workshop output had it been appropriated 20 years beforehand. It fits the mold to a certain extent, but has many of its own global analogies to consider. One can also consider the history of aerial photography when looking at the images. I think back through the history of the medium with J.W. Black’s 19th century balloon-aided photographs of Boston to Nadar’s “Geant” of the same manner over flying over the streets of Paris. Further to these allegories would be the rendering of areas of land destined for bombing by Allied forces-the cartographic miniature of the air force aerial surveillance imagery that would along with the RAF of England, help reign terror over the cobblestoned streets and quiet forests of Germany alike during raids.

Apart from the objective and relentless cataloguing of new build housing, one has to consider the land of Germany and the strange place in which these new environments were being created in a very old country completely obliterated by the Second World War. The Germany of deep forest (Wald) and of romantic ruin crop up very sparingly in the book as a device used to distance the romanticized past to the current plywood and swimming pool present in the housing developments and it is not without obvious repulsion that the two exist under the same sky or dirty airplane window. This is not to limit the housing development as something that is bad or wrong, but rather to simply look at the material value of dwellings-stone versus the aforementioned plywood and cinder block. The latter feels cheap in comparison, but we cannot all live in castles, can we? In any event, the promise of the future under past circumstances of near oblivion, along with the at times shifty fortitude of capitalist incline have produced the housing pictured in Piller’s book. The “God-eye” view of the images does indeed feel like surveillance at times, and much could be said about the prefacing of Google Earth technology or drone imagery when looking through the book but it doesn’t end at the New Topographics or the repetition of typology and technology.

Under scrutiny, the images in Piller’s book become nearly animated under the microscopic view. Themes certainly repeat-tents in the backyard for children to escape their parents in summer months, the curious yard umbrella and more cryptically, when viewed en-mass are the red blankets being hung out the window to catch the sun and air out, which make me think of a “house tongue”. Figures, nearly model-like in their scale, encapsulate the view of the open-air dollhouse and go about their business as if nothing peculiar were looking at them from above, much like the state of surveillance today and the figures in doing so create an elaborate tableaux of humans frozen in time in which their intimacy, their worldly belongings and their familial reckonings are contained hidden under the roof of their homes-the interior mechanisms of a sealed dollhouse. Of notable exception to this rule are the few people who look back at the sky. They strangely remind me of the train spotters in “RFK Funeral Train” by Paul Fusco, straight-backed and nearly saluting the camera or intensely focused on blotting out the sun to see the vehicle in which the camera and photographers are circulating.

The book is beautifully produced by Verlag Bernd Detsch and is completely absorbing. There are a number of German photo books that are fairly elusive and expensive in original form, this being a prime example. It is with great satisfaction that this book has been re-printed; its value has been previously overshadowed by its expensive collector status. Everything about it feels just a little bit queasy or uncanny. If you did not know better you might think David Lynch had rented a helicopter to scout locations for an alternate German Twin Peaks. The conduit between fascination and uncomfortability are a prime example of why this book and Piller’s collected re-authored images are incredibly important. He has not drawn direct parallels to the war, nor has he gravely indicated unnecessary cynicism. The work is open-ended, relies of technicalities of modernist movements, but also eschews those same movements for the questions circulating about Dystopia and Utopia, time and culture. If I could recommend but one book for you to consider this year to challenge you on a micro scale your impression of Germany or the world in general prior to rampant technological optics, it would be this one. HIGHLY RECOMMENDED.