“I remember seeing images of rock or glass candy with scorpions frozen into their sugary structure, it would not be far to think of these portraits in that capacity”

Refraction and intake. The micro-aggressions of data collected at a distance and through the elemental condition of water. The syrup and the pixel. There is a cooling chamber for echoes where the heat and velocity of their weight are summed up against the grain of sand plugging up the cascade of the siren’s tear duct. It distorts the vision of the sprite. The lachrymal bridge becomes an absconded pathway to vision when it brims with the viscous molasses empowered by fevered dreams and in-eloquent emotion. Should the grain of sand be removed to the tar sands of time stretched under the mermaid’s eye, an enforced clarity would hasten an unnecessary explanation as to why the salmon and rosé mist occupies her thoughts when she only has two eyes from which to manage three worlds (Above, Middle, Below). Mermaids should be genderless and more aggressive. 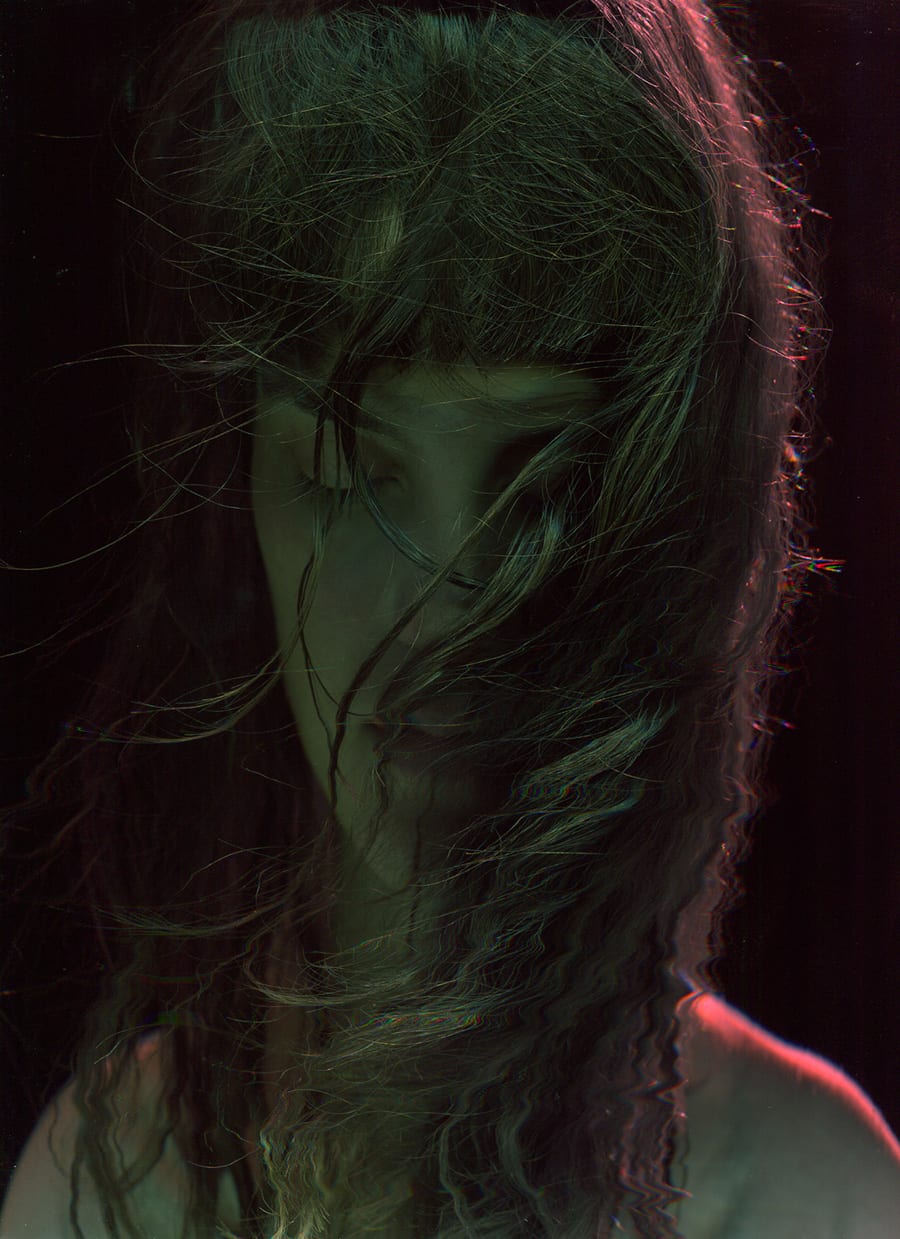 “They somehow came with a soundtrack. I could imagine Chromatics slowed down to the pitch of a DJ Screw mix tape”

Andre Seoane’s “Ondina” is a selection of images I tripped over a few months back. I don’t think they have been published previously. From my limited technological apprehension of matters photography, my feeling is that they are probably scan bed renders of portraiture. Sitters are held at a distance, pink salmon lighting applied to them- a facet of distance and the registry of the scan bed, but I may be wrong in my hypothesis. The images are distorted; they are pulled and much less preened from the notion of perfect portraiture. The lighting is hazy, it is uncomfortable and garish in a way none too small. I was drawn to the images, to the state of their “slippage” and to their state of ill-lucidity. They somehow came with a soundtrack. I could imagine Chromatics slowed down to the pitch of a DJ Screw mix tape. I’m not sure if the purple aura suggested has any bearing to hip-hop culture (purple drank, lean, purple jelly, Texas Tea, Dirty Sprite) or its crossover to the new age chakra bound bullshit ego-folly of “Indigo Children”, but I doubt it. Still the thoughts crossed my mind. Ondina itself seems to refer to mermaids and mythological underwater environments in which these portraits allude to. To me, and to beat the Chromatics and Italians Do It Better reference a little further, they remind me of glass candy- the sweet, and not the label-sharing friends of the Chromatics.

I remember seeing images of rock or glass candy with scorpions frozen into their sugary structure, it would not be far to think of these portraits in that capacity. I have written about amber and photography several times in its relation to photography and the slow shift of meaning metaphorically characterized by the fossilized sea gem. Though I cannot apply the same logic to these, the aesthetic basis does formulate some reasonable brokerage to the portraits and their visual effect. To issue terms of psychedelic seems redundant, but it is also not untrue. They simply exist as notes in the stream of images that I come across daily and have struck a rich chord with me calling my imagination in towards the jagged cliffs.