I have been quite lucky to catch up with Steven Shearer to talk a little bit about what inspires his work. The subjects within his drawings in particular examine a few dark currents within the maelstrom of contemporary sociological conditions, namely sub-culture and some themes of victimization. His skill as a draughtsman remind one of the skill and consequence of the academy without the boorish rigor often associated with “classical studies”. The work is to some degree representational and by all means intense in its delineation of superb skill. There are certainly antecedents within the annals of art history-art nouveau through German Expressionism. The work finds a visual style not uncommon to the period of bubbling modernity, but is contextualized in the present now by its thematic intervention. It is refreshing and as Black Phillip has indicated, somehow “Delicious”. Though the blatant themes of occult matters, Satanism, and transgressive taboos are examined in the work, they are not overbearing, kitsch or clichéd. Previously unaware of his work, I find the whole of it engaging and inspiring. The interview with Steven also bears the glib remarks that show the author as comfortable with the absurdity of some of the topics he works with. I would not say he is without humor by any means and this sort of gallows humor is also found within the works that deal with language-the text pieces. They bubble and ooze and make a perfect companion to the figurative works. His current exhibition is on at the Brant Foundation and I hope if one is local that they are lucky enough to see it in person. 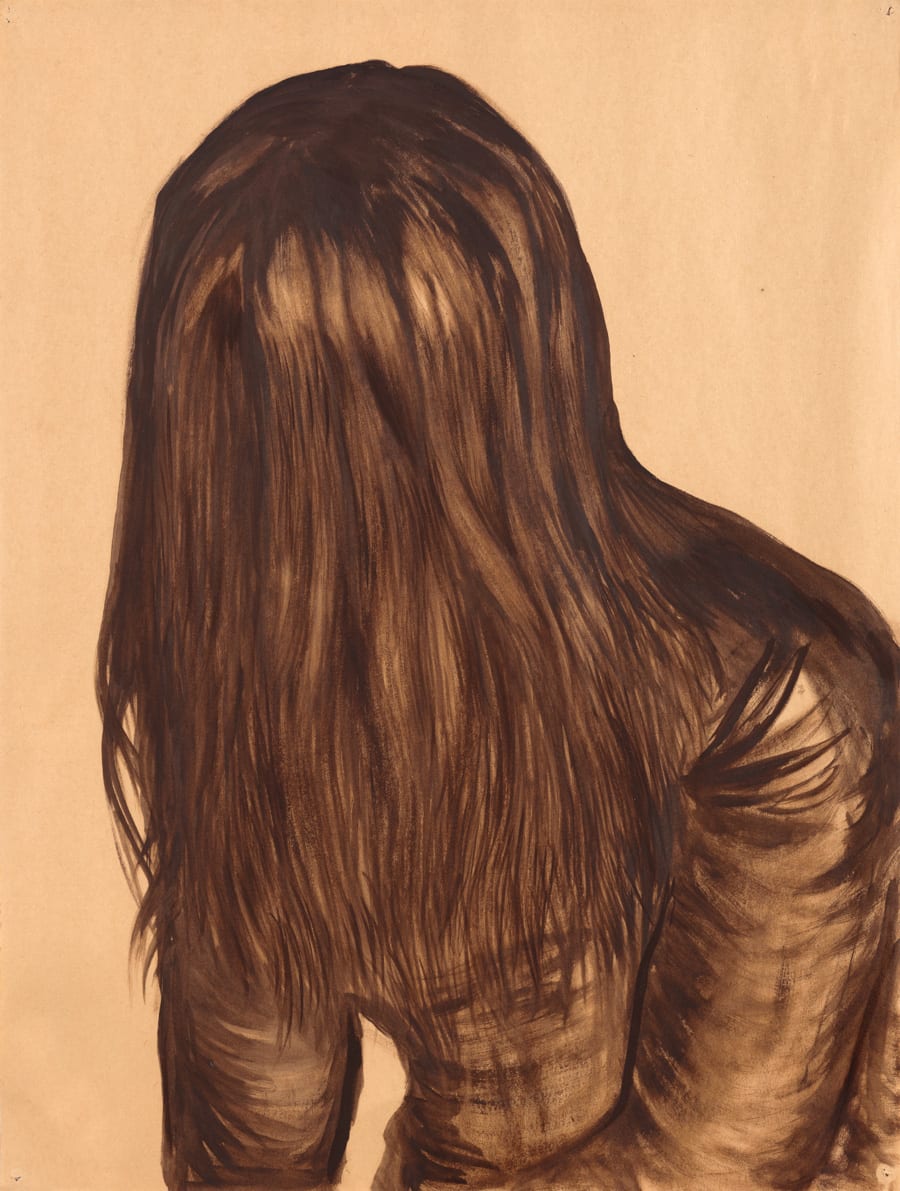 An occult Marlboro package crushed and in a rolled up “Show No Mercy” Slayer short sleeve. Long stays at the local fun fair carnival spent pissing in bushes and throwing rusty darts at balloons to win the King Diamond glass mirror- the strange and unfettered influence of the hyper-imagined body of Ray Brower versus the contempt for his pale blue skin in a movie cast with young men due to crumble unto the tempestuous ravine of an unholy and sanctimonious drug use-River Phoenix (Never rose from the ashes, did he) and that Corey that nobody really wanted to live over that other Corey whose destiny, after Lost Boys, was simply a faded coke-bloated and fatted version of his younger more attractive and sought after self.

One gets the sense that the 80’s were infectious and that the uncomfortable neon diadems that hung on our heads while kicking up dust and walking back from the fair, young lungs wheezing in the haze of the aforementioned Marlboro blaze, the cigarette after the meal before we found the cigarette after the sex, which somehow improbably led us onto the battlefield of Otto Dix, though our feet clambered unsafely out of a different, if still beleaguered trench. 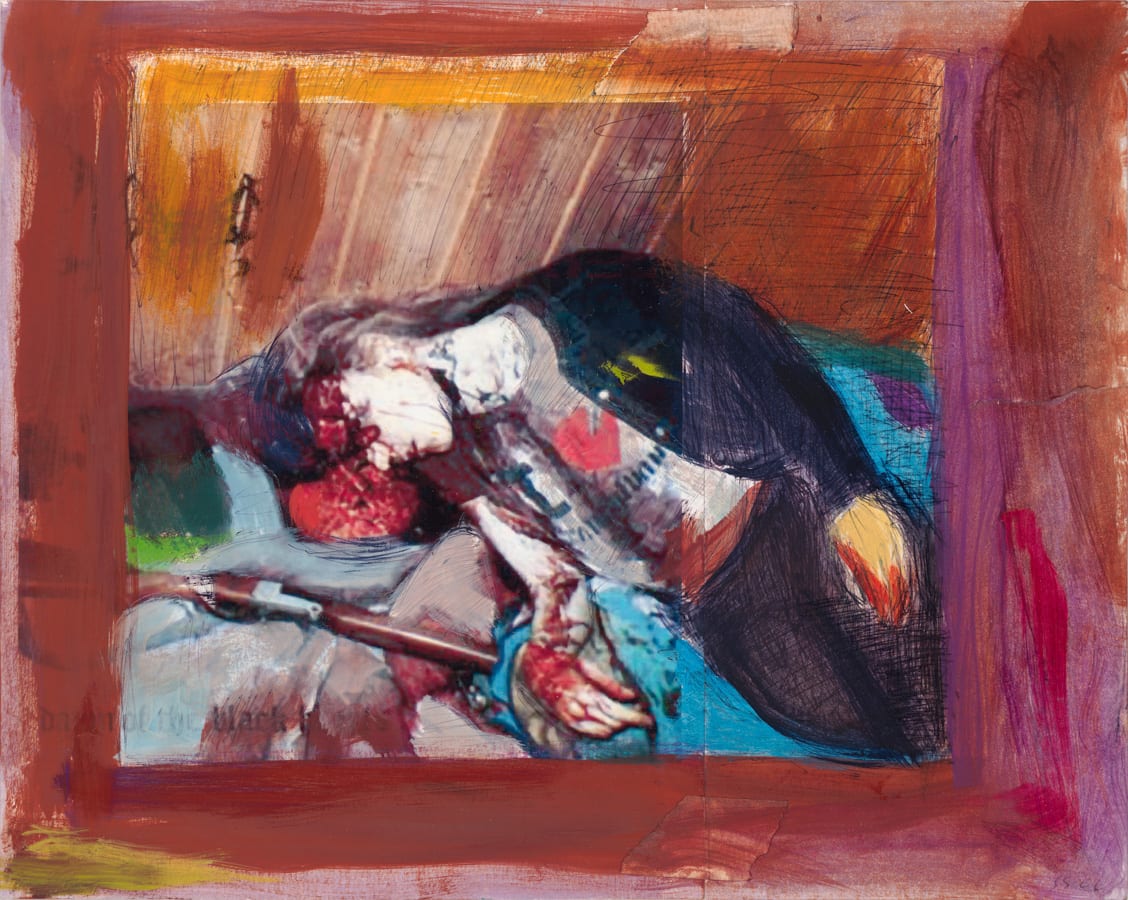 Where did you go wrong at Steven?

BF: In all fairness to historical attenuations of de-merit and the duplicity of having been influenced by the touch of another man’s pastel, your palette suggests a heavy dose of German Expressionism, “Der Blau Reiter”, Franz Marc, and the jazz that bleeds into a Cannibal Corpse or perhaps Mayhem tune. When not filibustering the corpse of art history, did you dabble, cross swords with or become infected by Ze German tradition or its counterparts in Vienna, Klimt and Schiele?

SS: The first art book I owned was a pocket-sized book on Schiele.

BF: Music, the sweet dried husk of humanity’s trumpet blowing forth the honey of perversity into the needy (y)ears of adolescence…Can you elaborate how the fantasy of music outside of the simple listening experience pervades your practice? What I want to clarify is that though I also share an affinity for Death Metal and Black Metal, the sound of the music often energizes my limp form, yet…it also allows me to follow all manner of fantasy in my head from “Auschwitz, the meaning of pain” to “Tonight, the circle is broken forever”…it justifies my intent to distribute an energy that does not simply pour into the ear, but rather converts my whole being into a place that cannot exist. How much of this fantasy world enabled by music gives your “sight/vision” its
magic? 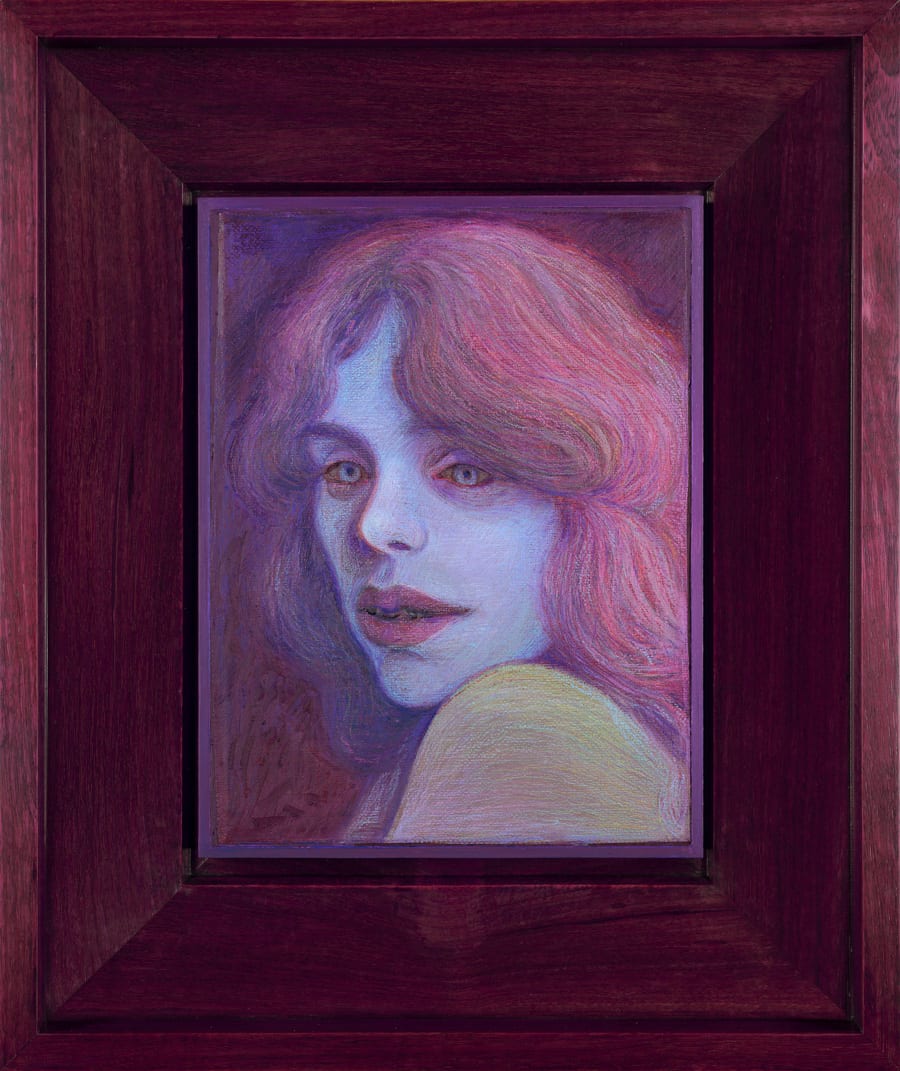 SS: I appreciate it as a rare form of operatic expression for a masculine segment of the working class world. Also as a font of mannerist energy, a narrow, relentless repetition of themes around Satanism, blasphemy, nihilism, apocalypse and suicide contained within the backdrop of suburban reality. I have been drawn to the imagery of the scene and its advertent or inadvertent echoes of German Romanticism and expressionist art. I think some contemporary subcultures can offer a kind of phrenological shortcut back to different epochs and their manners of appearance. I feel I would be on the right track if the figures I painted could convey something familiar or recognizable of our times, while also being animated by the ghosts of the bodies and portraits painted of our relations throughout art history.

BF: I thought Leif Garrett was dead until I interviewed Dennis Cooper and later found images of Garrett on eBay…posters…which for the benefit of the seller and the suspected Garrett collector read…”Leif Garrett Skinny Boy Shorts TEEN LEGS”…it was for a poster of the young Leif reclining…like the dear odalisque of his tiny shorts just managing to capture the top heft of his teen legs so as not to arouse too much suspicion, yet just enough to pander towards an awkward uncle’s uncomfortable touch on the top of the knee while riding in the pick up truck with him, air scented with gasoline and Lucky Strikes.

A grimace as eyes catch each other in the rearview mirror, like prey and hyena on that bumpy ride in one’s formative years….the young male….the desire…the hidden agenda of libidinal impulses crafted towards the young manboy…why is there a culture obsessed with this difficult sexualization of the male youth? From Larry Clark to Gus Van Sant, there is a soft bubbling…and oozing transgression to speak about the victimization of young men. It isn’t about sexuality, it is more feral…almost bestial…it clearly influences you…why is that? Was Garrett your inspiration for the mauve fauve?

SS: Yes he was. When I was in art school I was making paintings of the male figure. The sorry subject of these paintings was often based on myself as the model, disguised with transplanted heads making it something other than it appeared. These paintings were often interpreted as homoerotic but once some fellow students noticed I was driving a black Firebird to school the paintings became potentially homophobic to them. I think the confluence between the memory of one’s own bodily experience and autobiography with eroticism has created a mirrored room of readings and meanings. Adding to that, the androgynous figure has long been a subject in painting that has interested me and has drawn me in turn to many Symbolist paintings depicting figures that have mysterious and effeminate qualities painted in an idealized and timeless way. 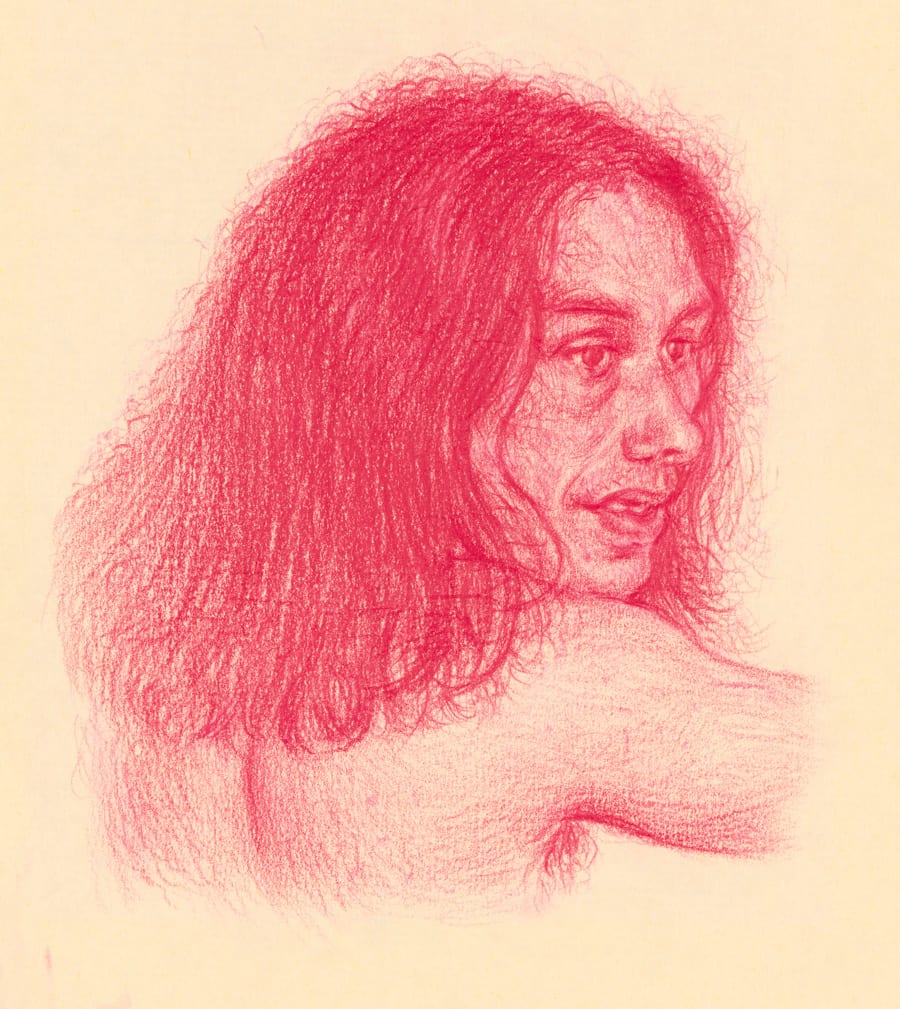 BF: The sleep of dreams produces vulnerability. The found images you collect…people sleeping…the obvious tropes of voyeurism, vulnerability, the fecund Freudian pictures from an execution at sleep…why do these picture affect you? Do you consider the amassing of them as a particular work…the collector of in-between consciousness, lucidity an endeavor…an opiate?

SS: I see that work as a figure study in relation to religious figuration. There’s something about the bodies being in release, yet mannered because many are captured asleep outside of a bedroom. Expressions of torment or ecstasy can be found in their sleeping bodies and faces and by shifting the orientation of some of the original photographs bodies appear released of their earthly bonds as well.

BF: “The Ornamentalist and Apprentice” this is an infirmed invalid…a self-portrait at once at a distance and at once very personal. The edge of the canvas within the canvas, it suits to create a distinction between world of paint and worlds of display…it is categorically positioned as an auto-portrait and perhaps automatic in the use of pictorial space as the apprentice hints at having a body, though I suspect he does not…how close do you feel to your subject matter…I want to officially declare that I cannot see if the subjects are strong or damaged. I like that they are either damaged strongly or perhaps strongly damaged….

SS: I think sadly they are extensions of myself. They are not figured out or resolved ideas beforehand. I feel my way through them and shape them to fit. I feel that no matter how fanciful or outrageous the paintings are the fact that I ended up as an artist and made them is somehow more outrageous. 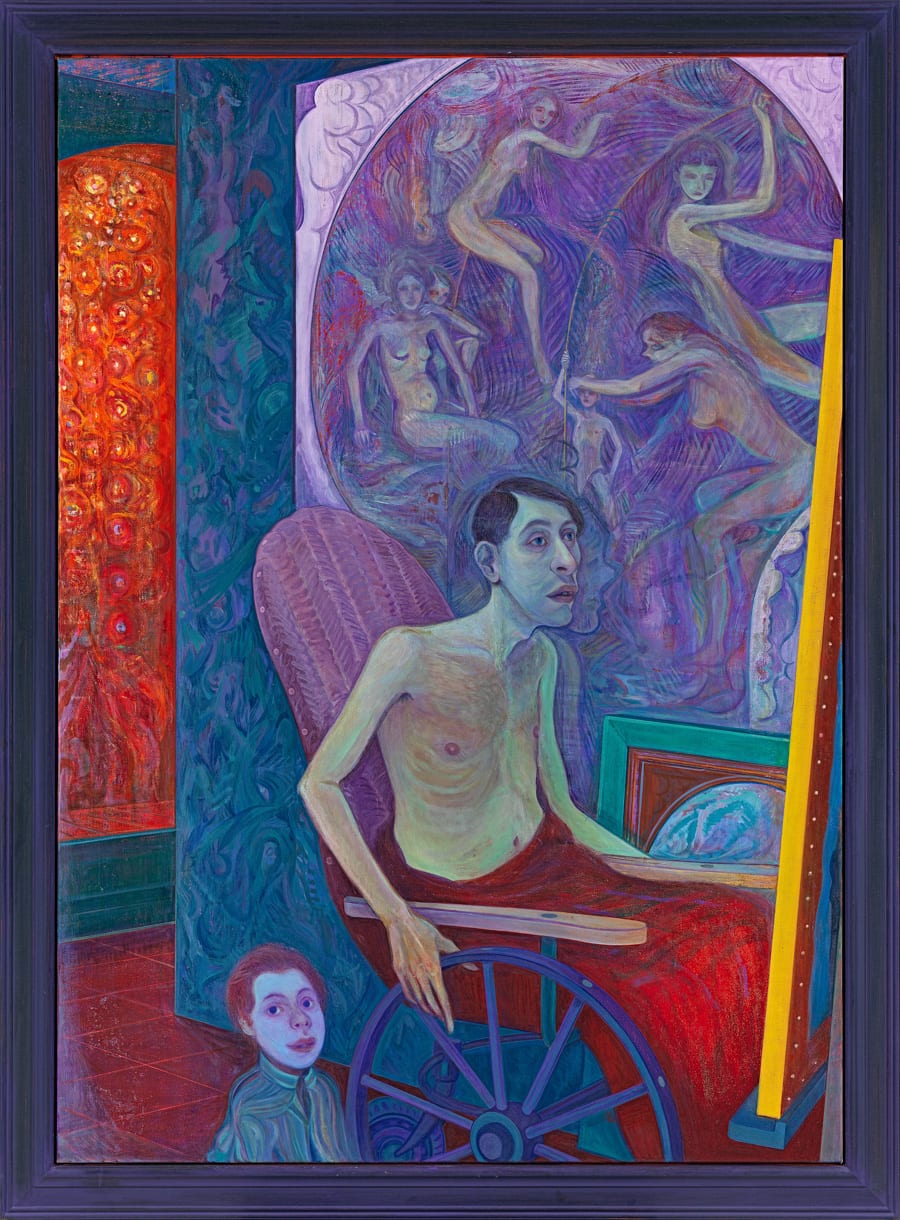 BF: Getting back to magazines, and I’m sure Mr. Brant can relate…y(our) generation, that dulcimer addled pre-intranet generation of acolytes found in our fascination for visual entropy a semi-limited treasure trove of material to comb through. The materialization from Encyclopedia Britannica to the pages of Interview Magazine, Tiger Beat, Metal Hammer and perhaps the odd purloined Victoria Secret Catalogue were the click bait of the times. Do you find yourself ruefully nostalgizing this sort of content by any means? Do you look back for inspiration-not to suggest the intranet isn’t enough?

SS: I would say the motivation is forensic rather than nostalgic. In my studio I have thousands of clippings indexed and archived.

BF: How familiar are you with Norway in 1993? Did the Dawn of Black Hearts imagery play into your Venice work at all and whom do you think has that photographic image?

SS: I wasn’t there. I did make a reworked image of the photo that was included in my exhibition in the Canadian pavilion at Venice. There was also a miniature portrait in crayon of Euronymous and one of Necrobutcher. I have no idea.

BF: Is there one lucid moment that you can dredge from your being as being the most challenging or vision-oriented moment that changed your perspective about how you handle the topics that you do? Did you have any blessings of the epiphantic sort where the subject matter in your work became really apparent at a singular point?

BF: It would be unfair to dismiss the purpose of this interview for my own perverse pleasure in pandering positively pernicious propositions to you. I am very excited, in fact elevated, to see your work being exhibited by the Brant Foundation. Peter Brant is a well-known player in the arts and magazine industries and his taste is impeccable. I was not aware of your work before this interview. How did the exhibition come about? I wouldn’t hesitate to guess that he may have been a supporter for some years or was it simply “Good work, kid. Let’s do a show” sort of affair?

SS: In 2011, Peter saw my art for the first time in the Canadian pavilion at the Venice Biennale and soon after started building a collection of my work, which lead to the show happening.

BF: Of related inquiry, I think I saw an outdoor text piece of yours in Athens three years ago. Again, I have not been made aware of your work until the last month. The text was incredible, but I suspect now this was from the black/death metal inspired poems. Will you be showing text pieces at all with the Brant Foundation? Will you be showing any of the Suicide Boys?

SS: Yes that was Poem for Athens. My only public artworks to date have been creating these large-scale murals in Venice, Berlin and Birmingham. I will be showing nine Poem drawings and the five ballpoints of the guys in the nooses at the Brant Foundation.

Steven Shearer at the Brant Foundation continues until April 3rd 2017.