“No, Anthony Hernandez’ sober look at his hometown reminds us that Los Angeles is not the most photographed city in the world, but rather, one of the most culturally, economically and racially divided places in America.”

It often said that Los Angeles is the most photographed city on earth. It’s not true. It is also said that nobody walks in LA. Another lie. Or at least, in line with the nature of the city itself, its pure deception. The latter statement really means to say that the wealthy and privileged don’t walk. The former statement refers to the endless supply of still images made on or for the sets of Hollywood films, as well as B-roll; the dubious in-between footage in movies, television and news media used to create visual narratives or a change in geography. In “The History of Forgetting: Los Angeles and the Erasure of Memory,” Norman Klein writes that while it may be the most photographed, the inadequacy of b-roll imagery is in part why Los Angeles is also the least remembered city in the world. After all when one summonses to their photographic memory the vast archive of still imagery representing city life and the urban landscape, they likely find themselves on a crowded street corner in Manhattan, or the back alleys of Paris, at night, sometime last century. The inaugural exhibition at The Broad museum boasted of many major artists like John Baldessari, Catherine Opie and Ed Ruscha, who made LA their home and are associated with the city. Ironically, the only work in the show that alluded to Los Angeles, the place, was Ed Ruscha’s 1979 minimalist text painting that reads, “Hollywood Is A Verb.” 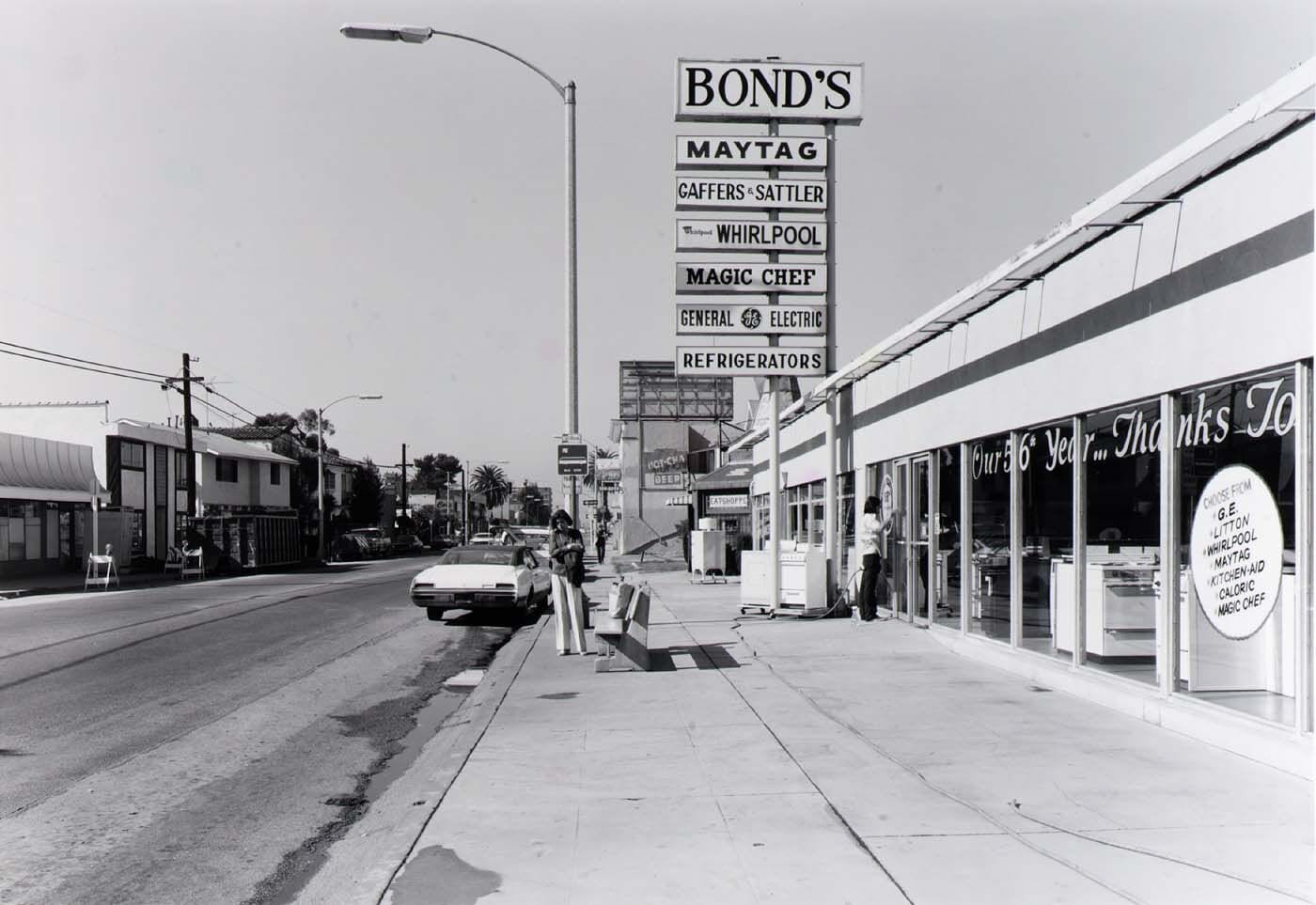 “The son of Mexican immigrants, Anthony Hernandez grew up in Boyle Heights, a working class neighborhood east of the LA River and downtown, which has recently seen new art galleries met by anti-gentrification protests.”

The first LA picture that comes to my mind was made by Garry Winogrand, a photographer inextricably bound to New York and the work he made there in the 60’s and 70’s. You know the one, Los Angeles, 1969, where three silhouetted women walk toward the corner of Hollywood and Vine, met by a boy in a wheelchair, head bowed and all merciful. If you want to see Los Angeles, playing itself, as it were, in a range of photographs that span the past half-century, well, you have to go to San Francisco. There, at the new and improved San Francisco Museum of Modern Art (or in the beautifully produced catalog), you will find the career retrospective of Anthony Hernandez, an artist to remember.

The son of Mexican immigrants, Anthony Hernandez grew up in Boyle Heights, a working class neighborhood east of the LA River and downtown, which has recently seen new art galleries met by anti-gentrification protests. In the 1960’s, however, Hernandez had no exposure to art. The event that changed his life, pulling him out of a street gang and doing drugs, was his best friend giving him a photography manual published by the navy, which he found in the men’s room at East Los Angeles College. He would later take classes there working in the darkroom, the extent of his formal education. 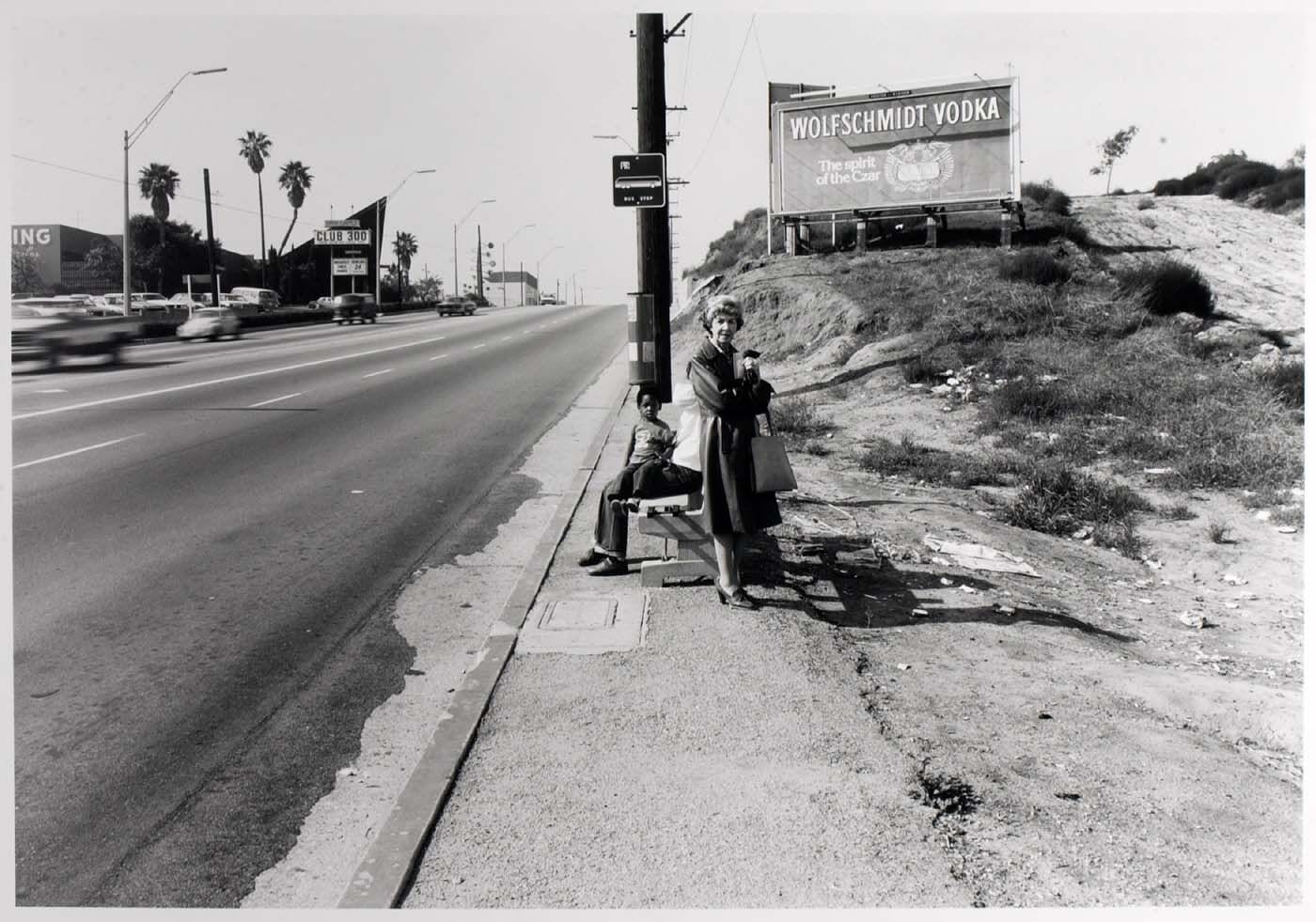 While Hernandez made pictures in Europe, as well as Vietnam, where he served in the United States Army and had issues of Artforum mailed to him, his strongest work is that which scrutinizes the complex and often elusive social dynamics of his native Los Angeles. In 1969 we see a 22 year-old Hernandez, and protégé of Winogrand’s, successfully employ the language of the street photograph in downtown LA. That same year he ventures out to the west side beaches, where he finds his subjects sundrenched, fully dressed and sprawled out on the sand, as if washed up onto the shore, not by the rollicking waves of the great Pacific, but from the unrelenting tide of the city and country beyond it. Nowhere in sight are the Hollywood hills, its faint sign, nor hints of the eminent socialites murdered by the Manson family that summer. Nowhere in sight is the glitz and glamour, the myth of Los Angeles perpetuated by countless films and dollars. Nowhere in sight is the counter-culture of Dennis Hopper’s LA pictures, not to mention “La La Land.” No, Anthony Hernandez’ sober look at his hometown reminds us that Los Angeles is not the most photographed city in the world, but rather, one of the most culturally, economically and racially divided places in America.

“What we find are landscapes of cigarette butts and makeshift furniture, the few clothes available and old magazines that drifted in like artifacts from the straight society from which they’ve been evicted. The strongest in the series Landscapes for the Homeless #29, shows a belt, some razor blades, and an uneaten apple, as if proof that God doesn’t exist, that Eden was going to fall either way.” 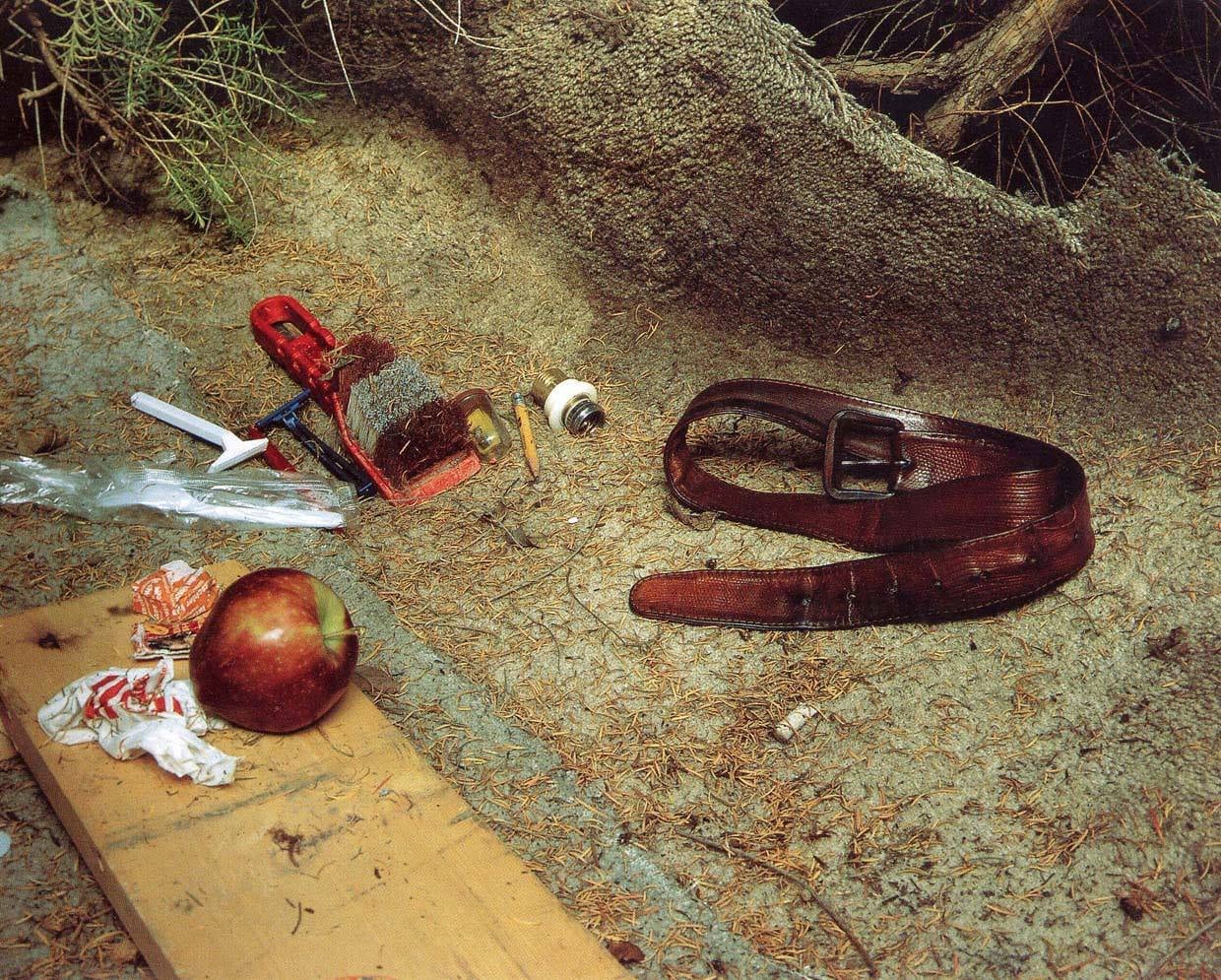 Hernandez claimed that part of the reason he moved away from the 35mm street aesthetic to a large format 5×7 camera, was because he felt in order to thrive making work in that mode, one had to travel to various cities and he couldn’t afford to do so. Another reason could have been that the amount of blocks clustered with pedestrian traffic in LA are few and far between. One of the marvels of Winogrand’s work, for example, is what happens when unlikely pairings of people share the space of his frame. But, the streets of midtown Manhattan back then were a kind of crossroads for every type of city dweller. Los Angeles is physically undemocratic, by both its natural and built landscape. Not to mention, the pace of the city is exponentially slower. This is part of why Hernandez had to employ different ways of working, and travel to different parts of the city, to investigate its social textures. We see workers amongst damaged vehicles in car body repair shops that occupy much of LA in his Automotive Landscape series. In this work, the move to the 5×7 camera serves the photographer well in describing with greater clarity the physical presence of the landscape. One looks at Automotive Landscape #41, of a man working on a truck engine outside an auto body shop, taken slightly from above, and is reminded of Jeff Wall’s An Eviction, 1988/2004 taken from the same vantage point, looking down an ordinary neighborhood street (Its no surprise Wall has championed Hernandez’ work for some time). We see people waiting for the bus on the blighted boulevards of his Public Transit Areas pictures. We see office workers on their lunch breaks sitting in the confines of manicured corporate headquarters. Then he takes us to Rodeo Drive to see where the other half goes to walk the streets, spend their money, see and be seen. This is Hernandez’ first work made in color, giving a pedestrian quality to the prosperous. Red lipstick, gold signage, and various shades of blonde hair materialize. I looked at Rodeo Drive #34, 1984 for several minutes trying to decipher if the subject in the center of the frame was a real woman or a mannequin, before eventually conceding that she was real.

The Rodeo Drive pictures are made on the streets of self-conscious passersby. The work sets up the necessary and stark juxtaposition of Hernandez’ later color pictures, Landscapes For The Homeless. In this work in the late 80’s and early 90’s Hernandez photographs homeless encampments around the city. Homelessness and homeless people makeup part of the vernacular of the landscape of Los Angeles like no other city in this country. Entire blocks and nooks under the freeway are occupied with tents and tarps tied from tree barks to fences. Not to mention the allocated streets downtown known as Skid Row. Hernandez looks at the scraps of land the homeless claim until they can’t, and what little belongings they keep there. What we find are landscapes of cigarette butts and makeshift furniture, the few clothes available and old magazines that drifted in like artifacts from the straight society from which they’ve been evicted. The strongest in the series Landscapes for the Homeless #29, shows a belt, some razor blades, and an uneaten apple, as if proof that God doesn’t exist, that Eden was going to fall either way. The strength of these pictures has much to do with the fact that they are devoid of people. This was an apt yet far from obvious choice by Hernandez at the time. By photographing the spaces the homeless rest in without the people themselves, they avoid the easy clichés and tropes of pseudo-sympathetic humanistic photography, and rather function like crime scene photographs. The crime here being the obvious reality that in one of the largest cities in the most developed nation on earth, we accept that tens of thousands of human beings live around us without shelter. From the time Hernandez made these pictures to now, its has only gotten worse. In a conversation with Lewis Baltz which accompanies the series, Hernandez notes the obscenity of the term, “’The Homeless,’ as if they were an organized group with rights, a group you belonged to.”

Baltz then asks Hernandez what he thought of the perceived notion that Atget photographed Paris as if it were a crime scene. “Hard pictures to make,” Hernandez replied. Could we say that about Atget’s pictures? Was Paris worth photographing? Could I look at my own pictures and say ‘was it worth photographing?’ The answer is yes, because nobody else was looking.” Yes, Anthony Hernandez is the Atget of Los Angeles, and it’s a small crime that his career retrospective has no plan to travel to the city it so beautifully and shrewdly examines.