“The presentation of politics has become pure entertainment; just another unhealthy consumable good and both candidates got chewed up and swallowed that night, which felt very appropriate and was more therapeutic than I would have imagined”

Denis Maksimov: A lot of art deals with relatively current event, but it would be hard to be more current than your exhibition “Star Spangled.” I’m not sure where the question is here… it’s just rare to see something so right on time.

Harlan Levey: As an American living in Europe for a long time, I’m often amazed at how people tend to know more about the surface of American politics than they do about what’s happening in their own back yard. On one level I get it. On another … give me a break. For months people have been coming to the gallery and talking about Trump, but if I ask about Juncker or Oettinger or other activity within the EU it usually draws a blank. For example, if you’re wasting time talking about Trump’s tweets or “locker room” talk, but don’t know who Oettinger is or have any interest in his recent “Slanted Eyes” references, this feels problematic on many levels.

DM: I feel like this is going to become a disgruntled talk about politics.

HL: There’s enough of that already. Let’s not go there. 2016 has not been the prettiest of years. That’s one of the reasons I wanted to put on such a current exhibition- to let the work of artists I admire be the core of the conversation. I believe that art is one of the last domains where it’s possible to have a critical and constructive dialogue that can alter perception in an intelligent way. It’s not art for art’s sake. It’s art for a better world or at least a different view of the one we live in.

DM: Great. Can you talk me through it?

HL: The exhibition starts with works by Jeroen Jongeleen that were created during a residency at Burlington City Arts, which is part of Bernie Sanders legacy as mayor of the city back in the 80’s. Jeroen is best known for public interventions, which are critical of the way advertising, architecture and government planning envisage and regulate them. He was invited to Vermont by the BCA’s former curator DJ Hellerman (who is now the Chief Curator at the Everson Museum in Syracuse, NY) to participate in an annual event called “Of Land and Locals” and spent a month in this idyllic part of the country working on his “Running Shapes” series.

DM: I love that series. I remember back in 2014 when he ran a line from his studio in Rotterdam to your old space in Brussels, something like three and half marathons in a row to illustrate how difficult it is to move an idea from the studio into an artwork that navigates the world. This was a performance performance. Some of the works you presented were, what can I call that? Drawings he made with his feet? Sort of Richard Long for the 21st century?

HL: You can say both of those things. In that show we exhibited works, which moved between paying homage to conceptual and minimalists like Sol LeWitt and Jan Debitts to others that played with the traces of modernism. Jeroen built on this in Vermont, and in the exhibition we’re showing a work where he runs in a circle for about ten hours until the circle is worn into the earth. The printed image and video say so much. I love it for the failed romance, the effort, the absurdity and the ability he has to let go of things he puts his whole heart into. He also did a work in Vermont where he ran the circle counter clockwise and that’s how this election cycle felt- moving in circles, moving backwards.

From this sort of beautiful scene, we move into the next room of the gallery to encounter a more disturbing landscape in Doug Rickard’s videos from his work “National Anthem.”

DM: Does it involve the National Anthem?

HL: It does, but ground down to such a slow pace that you only recognize it in some eerily nostalgic instances and then you lose it again. Most of the time it’s an absolutely foreign and haunting sound track. This would also be a way to describe how I feel watching the videos. There’s already been a great article on this site about Doug’s work, which was one of the things that made me want to collaborate with him in the first place. Doug is an extremely relevant and exciting artist and I’m so tempted to talk about the project he’s working on now that I’d better move on and let you insert a link to what’s already been written here.

“They ate Trump first, but 100% of both cakes were gone by the end of the opening and the healing powers of cream cheese and red velvet were the undeniable voter preference. Sugar slowed down the spectacle” 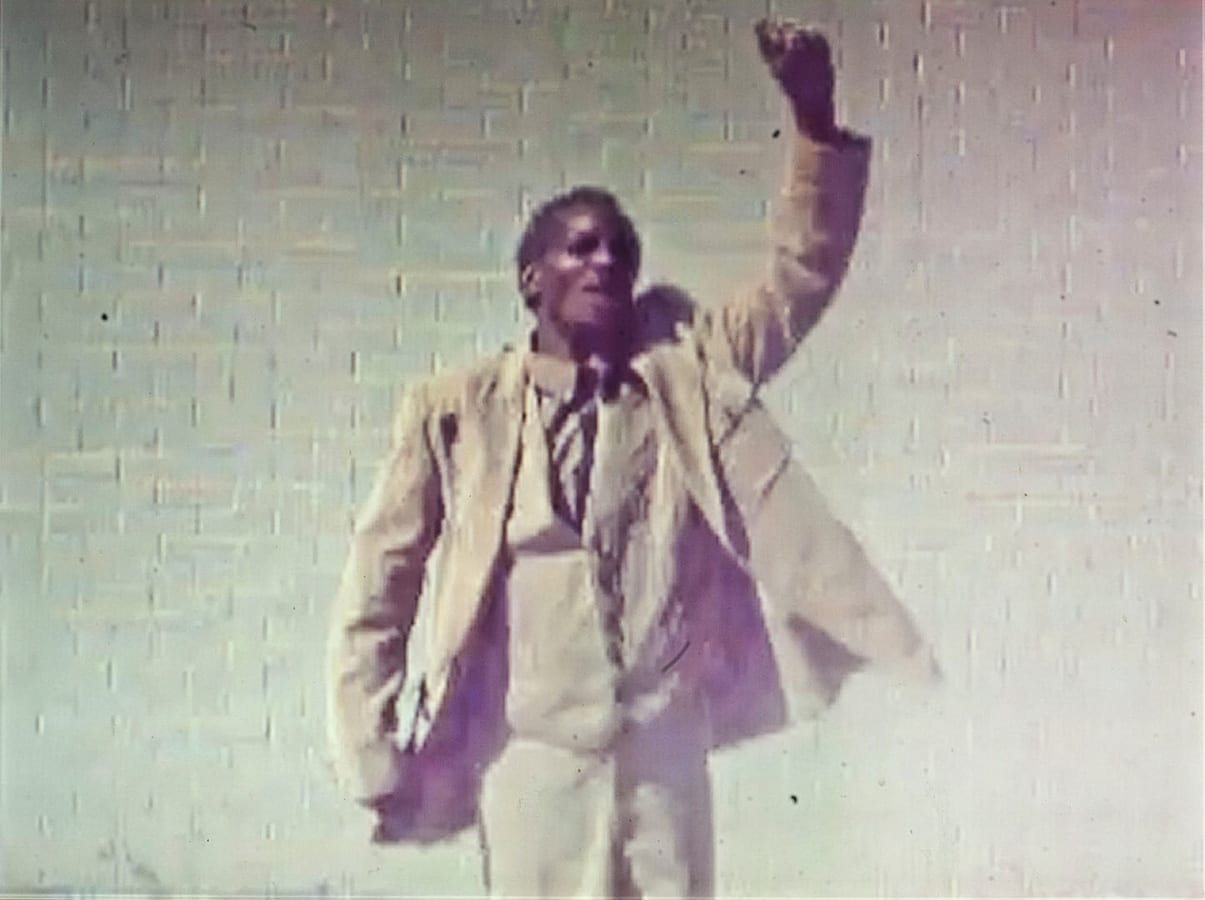 HL: At the opening we had two cakes, which were created on the instructions of Brad Feuerhelm and were iced with pictures of the two Presidential candidates. Brad asked us to claw into them. The resulting aesthetic was truly nasty, and incredibly close to the look and feel of images in his new publication “Good-Bye America.” In the book, which launched at Offprint during Paris Photo and is published by Yard Press, Brad selected images of the US from his enormous archive. We could call these ‘before’ shots and they speak about the sweet, sugary, sexy American dream. They were published however as ‘after’ shots, and what happens between before and after is something similar to my assistant Denis shoving his fingers deep into the eyes and mouths of the pictures painted in icing on top of the red velvet cakes. It’s a short and brutal gesture, which turns the image on its head and opens up new readings of it that don’t involve anything sweet as far as I’m concerned. Brad tends to climb happily into the underbelly of things. I found these works vulgar and fitting of what was a very vulgar campaign and election cycle.

DM: Did you eat the cakes?

HL: Initially, Brad wanted to preserve these as collectable objects in the same way Royal Wedding cakes are kept and traded, but yeah, in the end he asked us to slice them up and serve them.

DM: So guests were eating Hilary and Donald?

HL: Yes. The presentation of politics has become pure entertainment; just another unhealthy consumable good and both candidates got chewed up and swallowed that night, which felt very appropriate and was more therapeutic than I would have imagined.

DM: Did people have a preference?

HL: They ate Trump first, but 100% of both cakes were gone by the end of the opening and the healing powers of cream cheese and red velvet were the undeniable voter preference. Sugar slowed down the spectacle.

With the cakes gone we can talk about the last work in the show, which is a data collection project by an American artist named Roopa Vasuvedan. Her project #bellwether was commissioned by SPACES in Cleveland, Ohio and tracked the sentiment of Ohio voters on twitter from the time of the first televised primary debate to the Republican National Convention, which was held in Cleveland.

HL: SPACES is a Cleveland institution that more people should know about. One of their many activities is an amazing residency program and Roopa’s project was developed as part of this. Often great art tells the future and next election we could forget the polls and ask Roopa what she thinks. She collected around 15 million tweets from Ohio voters and tracked their progress month by month. She then hijacked the visual language of the campaigns and instead of using those codes to promote a candidate, she subversively used them to share voters sentiments about that candidate and their campaign. Hanging the show, two things were very clear. First, Trump dominated the attention of the tweets and second, most were passionate opinions throwing cheap shots or pledging allegiance. There wasn’t a lot of informed discussion. I was pretty amazed at what the project brought forward and how it instantly felt like something archival. Like you said, it couldn’t have been more current, but at the same time, two days after the election it felt like a historical work. This is a work that will age very well. Twenty or fifty years from now it will offer one hell of a testimony of a painful election at the end of a painful year for many around the world.