The Image of the assassination of Russian ambassador Andrei Karlov by Turkish 22 year old off duty policeman Mevlut Mert Altintas by photographer Burhan Ozbilic has set alarm bells ringing for denizens of the press, but also the photographic community. Questions of under whose authority and moral compass should one print such an image arise as do the questions of what it means to engage in confrontation with an extreme image.

The image, which is being branded unfoundedly by some as iconic is certainly worthy of discussion on several fronts. Notably, the image is extremely graphic in its representation of barbarity. The body of Karlov lies at the feet of the assassin whose hand is struck towards the heavens as he shouts his (albeit silent) monologue towards the crowd and perhaps stands summoning the obtuse will of Mohammed himself within the theater of an art gallery opening. The gun in his hand hangs taut and the veins on his neck enthusiastically cavort the blood from his body to his shouting throat. The suit he wears gives him additional gravity. The image is reminiscent of a Robert Longo drawing. There is also the Reservoir Dogs effect in the challenge of seeing a well-dressed man in an intolerable rage brandishing a murder weapon and shouting.

When I say that the image is not iconic, I am suggesting that there are operatives in effect that disable its potential from becoming what we consider as the immediate “ Photographic Iconic”, which is further removed from what an icon is, historically speaking. In terms of the photograph itself, I want to challenge the reader that the image is not iconic firstly because it is an image that we have seen and have been fed before. It is not new and therefore does not define anything but repetition. It is an embedded piece of image syntax that lies within our cultural understanding of images. It is an image that, as Colin Pantall has asserted, had potentially been rehearsed by the assassin several times prior to its execution. And I agree. I believe the assassin wanted full effect for his effort just as ISIL has maximized the potential of digital cameras and Internet distribution of executions from the desert in a form of propaganda. The display had the theatricality and the impending tension (if you watch the video) of being somehow staged or invented as a longer routine played out perhaps in front of a mirror or the lens of a camera.

“What is at work here is not that the image is iconic, but that it is graphic and SUPERFAMILIAR, which legitimizes its effect and distribution.” 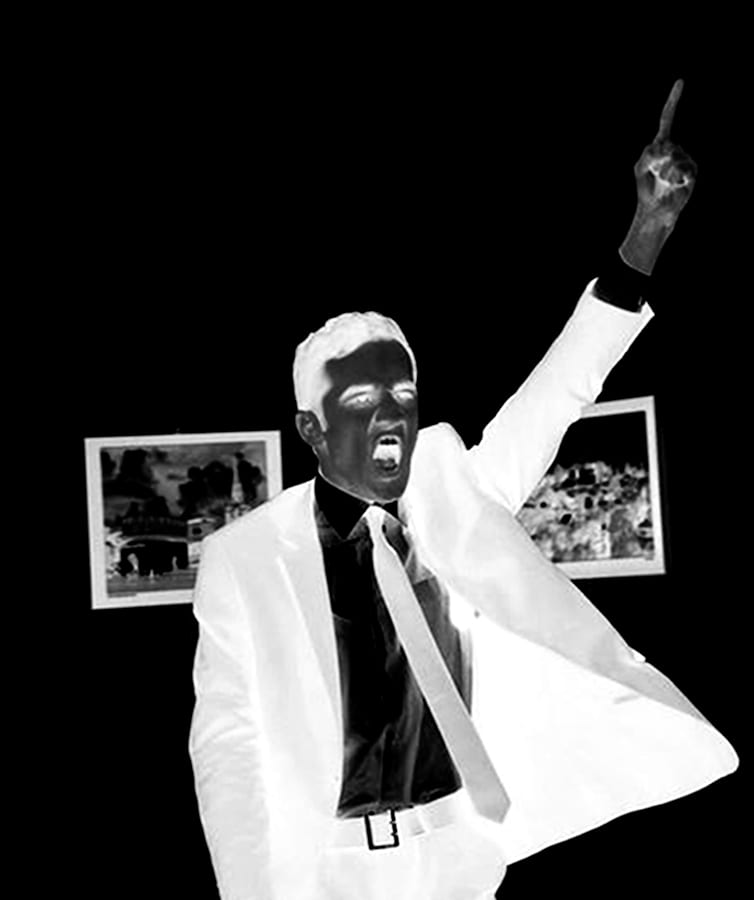 This desired maximum effect is channeled in the same way that the military entertainment industry allows us to adapt to our wars on countries such as Syria. The maximum effect condition allows us to believe that there is an aesthetic at hand for everything governmental such as espionage, policy making, war making and whistle blowing and it delivers itself to us in multi-million dollar film productions that we consume. This is no different and its familiarity is something that disavows its potential as iconic. What is at work here is not that the image is iconic, but that it is graphic and SUPERFAMILIAR, which legitimizes its effect and distribution. The Hollywood effect of the image creates its own delivery system for which an audience readily consumes its potential and secretes the fevered and unsolicited grandeur of iconic status too readily.

When I suggest the term Superfamiliar, I am assessing the image in relation to our collective image consciousness. It is “super” because it exists in a manner that is above the normalized tropes of image recognition due to its optical and neural networking. It is an image that lies underneath the consciousness before its very inception. It has existed before, but in its recognition of the familiar, it does not become iconic because of its singular nature, but rather because of its embedded standardized recognition quality. It is an image that becomes greater than its inception by process of an already recognized pattern, which pushes its status higher than an unseen or unrecognized image in our consciousness. It is not based in an alteriority or difference or newness, which should be considered as qualities for the status of the iconic. Instead, it has a greater gravity in our world due to its familiarity and therefore the collective access to its potential representation becomes greater and in this, the possibility of its corruption towards propaganda also becomes greater. So, in its recognition of familiarity, it breeds a superior status, one which, due to its embedded quality feels natural and recognized, but is pushed greater into the forefronts of our consciousness in its super state thus marking its status or economy as something that it is not and is potentially dangerous as it is hyper-distributed.

The use of this image in the press has presented questions as to why we show this type of image to people as opposed to being questioned as to the potential of its intended meaning as iconic possiblity. That is a strange bit of behavior. The sensitivity of an image like this then becomes about what is right for the viewer to consume and not necessarily about the gravity of the real time situation of its inception for those immediately involved. Further, this is a precarious arrangement of what it means for the western media to flirt with the slightest notions of enabling such an image towards the iconic before considering its potential use as propaganda. Whose work is being done should it be deemed iconic? To whom does this become an icon? To what position will it be used in the representation of the Syrian struggle? ISIL are incredibly quick to claim responsibility for acts such as these, should we not consider what happens when they decide to claim this image that we are distributing for them?

In Reviewing a few posts on social media about the image and reading the articles written by Colin Pantall, Jerry Saltz and a few others, I was actually more disturbed by the amount of images that were coming up in the feed from movies and museums that were suggested as having similarities to the image of Mevlut. In contemporary western culture, our use of symbols and our collective reflex towards Hollywood demarcates images of this nature into the cultural weave of collective and enforced memories and associations that are often encoded within the context of cinema and it is our ability to index these images and the representations associated with them into real world scenarios that should cause alarm. Cinema breeds a familiarity of an image, but it also happens in language such as when buzzwords get pulled from scripts/films etc. (Show me the Money, Money shot, Color of Money, Money talks etc.) and then become acculturated into daily use. We have been taught how to palatably absorb images and condition real world events such as this assassination with cinematic indexing. That this index system is repetitive and that we can draw so many similarities to the Hollywood machine nullifies this image’s potential as one of iconic status and further precedes its position within the world as SUPERFAMILIAR as to respect to our cinematic indexing capabilities which are based on capitalist and Fantasy driven patterns of recognition.

“It is super because it exists in manner that is above the normalized tropes of image recognition. It is an image that lies underneath the consciousness before its very inception. It has existed before, but in its recognition to the familiar, it does not become iconic because its singular nature, but rather because of its embedded quality”

Another reflective reason that I do not believe this image is iconic is that icons are developed over time. At present, we know the position the assassin wished to speak on. We think his main aim was to destabilize the talks between Russia and Turkey that effect Syria, but does this image, as graphic and familiar as it is, SUM UP THE SITUATION OF SYRIA? No, sadly it does not. Icons are used as a way for a society to project their frustrations, feelings, loves, or fears onto an image-object that resonates as a principal personification of the situation, culture or time in which it is produced. For it to succeed, there must be a clear indication of what the intent of the image is and what its final reception to history will be and also who will control it. This is important. If we have no control over our icons’ meaning, its use can easily be circumvented to produce a meaning that may be 180 degrees from what its manufactured intent was initially.

We have to be careful how we decide to engage with value systems and images. We need to reason that when there are values attached to deep tragedies as in this case that in commodifying an image as iconic too quickly we may be offering a dis-service to the initial victims but also to the representative community or situation in which the image is supposed to be the ambassador of meaning. We must also dissect why images such as this one resonate to a larger global community so quickly and we must de-stabilize the tenuous relationship between the press and the hollywoodization of images that are meant to produce information. If we do not have this discussion, it potentially becomes too difficult to distinguish image-reality from image-projection. The projection onto an image, which perhaps we can allude to as the term image-empathy is more complex and layered than the aim of this short reflection, but in base terminology does bear all the hallmarks of why there is a rush to graduate this image into a status of icon.

It would be unfair for me to dissect the image without paying its horrendous and graphic due. It is by its nature a shocking image. It does speak something to the state of multi-lateral political problems, to the ongoing and never ending wars in the Middle East and finally to the systematic corruption of singular images by the Hollywood dream machine. It has a lot of potential in its infancy, but that line between icon and infamy is perhaps one we should examine more closely for patterns before the image is co-opted by a different focus group that will use its trophy appeal for political gain, terror or otherwise. Be careful what you project onto and distribute in your rush towards image adulation.