“We have been sold a pup. The West Wing and similar political utopias have propagated the notion of the dignity of presidential office and of those who hold it. But It is hard to match this benevolent, patrician vision with our sordid reality”

America was never innocent. We popped our cherry on the boat over and looked back with no regrets. You can’t ascribe our fall from grace to any single event or set of circumstances. You can’t lose what you lacked at conception. 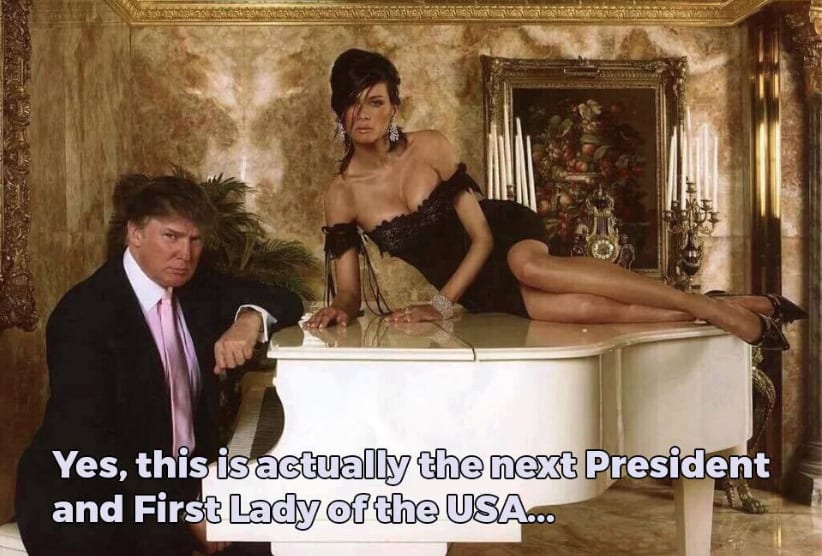 Such as this floats across your Facebook. Melania and Donald: the political Kim and Kanye. Another criminal president, this one with moll on the piano. You hate it, right? The gaudy billionaire with his lady bauble. Property magnate and pussy magnet, he controls the instrument. Welcome to the White (trash) House, right?

2016 and someone still thinks that candles and carriage clocks are something they want. Gold, gilt, and faces hard as marble. The Donald pitching somewhere between Hugh Hefner and Jay-Z, while Melania does Carla Bruni does Vegas – what the fuck, right?!

We have been sold a pup. The West Wing and similar political utopias have propagated the notion of the dignity of presidential office and of those who hold it. But It is hard to match this benevolent, patrician vision with our sordid reality.

So what does this picture say? We are your gods in our bling Versailles, yes. This is our triumph of surface, yes. Look at us. Don’t look at us. Mr Cosmopolis and potiche, cryonic coolant at the ready, yes.

In case we don’t know, the image helpfully contains text to remind us who these people will soon become. This text forces us to read the image as shameful: for America. This cocktail-hour duo are in charge?!

“So we must ask, is Melania an unfit FLOTUS because 15 years previous she perched on a piano in an easy-off dress?”

Like Martin Shkreli, the problem for the establishment is not what Trump does, but that he does it in plain sight. Since Trump is unshameable, the next best target seems to lie right next to him. So we must ask, is Melania an unfit FLOTUS because 15 years previous she perched on a piano in an easy-off dress?

Consider, if this were that other showbizzy power-couple, Jay-Z and Bey, would we care? Were this the crib of a rapper from the billionaire boys’ club, with piano, ice and bitch to go, would he be derided? Trump is a Hefner-wannabe, but Jay-Z and his 99 exclusive-of-bitches problems endorsed Hillary, so he’s off the hook.

In memes the image articulates the caption, and not the reverse. A breathing meme, Donald Trump is barely there, but the antipathy that assails his wife is exactly the opposite. While a semi-naked Gaga is empowered, a similarly disrobed Melania is an irony-free piece of decor. Why? It would seem that the actions of her husband determine her reception.

Today, we are repeatedly told that we live in an image-driven world, where text, as a cypher for logical thought, is now subordinate and in retreat. Yet the success of this meme as social currency, group comfort-blanket and intellectual shortcut is clearly driven by its textual activation of deep-running prejudice. That ‘post-truth’ is the buzz-word of mainstream political discourse serves to demonstrate the extent to which we delude ourselves regarding our collective past. This meme life serves merely to veil, not to enlighten.