“Perhaps it is a fantasy that one could wield power over the representation of death by its abstracted nature? Is this not a dangerous game to play god over the image of death?”

Cristina de Middel is what you could consider a household name in the land of the photography book fetishist. Her book Afronauts is largely responsible for giving photographers a medium to investigate as publishing became cheaper and the rise of the Afronauts book itself was seen as inspiringly stratospheric in its reach. That book and several of the proceeding books that followed it opened doors for Cristina that would place her in art fairs and galleries around the world. I took a moment to catch up with her regarding her new book with Editorial RM entitled “Cucurrucucu”. It is a book that weaves her considerable talent for drawing in with the archival tendencies that have shaped much of her previous books. The images are insipid and inspired. Whereas I do hint at things I may disagree with or find challenging within the material in the interview, that is not to cast doubt on its sincerity or presence of concept.

BF: What is the point of this book?

CDM: I wanted to try other things. I am tired of being cute (and sometimes funny). I know that, being a woman photographer, I am reducing my possibilities of making a sustainable career in the art world if I insist on being too political and outspoken but now it is too late because there is 1000 copies of the book already in the stores. What am I supposed to talk about? I live between Mexico and Rio. I react to what surrounds me and I always loved drawing. I love the way Mexicans deal with violence and death and I don´t know what the point is of most things I do, but this is mainly what the book is about: violence and Mexico.

BF: Do you think perhaps your bleak sense of humour, apart from appropriating the Mexican way of death, perhaps sustains or deliberately perpetuates the cycle of violence within imagery? Why Yes or why no? I don’t really see this conversation as engendered, but I could make the qualification that most of the victims in your book are…strikingly male…but perhaps lets deal with the first part of the question….

CDM: I think it is very difficult to break the cycle of violent imagery because each image pushes back the threshold of tolerance and people need a bigger dose everyday. You don´t need to go to Mexico to watch the phenomenon, just try to play some video-games now and compare them to the Street Fighter of the 90s. Mexico has definitely gone a bit further as they have almost integrated violent imagery in their folklore, but my approach in this book is not really surprising or irreverent. If you drive around in Mexico City you might find yourself listening to some ranchera music that comes from the street and have a newspaper boy trying to sell a copy of the MTERO publication with a decapitated body on the cover. The association I put on paper and in a book happens in real life…I just made the graphic translation.

“I didn´t realize I was going that far! I think we´ve been playing with the image of death since the beginning of the image itself! It is one of the big questions around existence so it makes perfect sense” 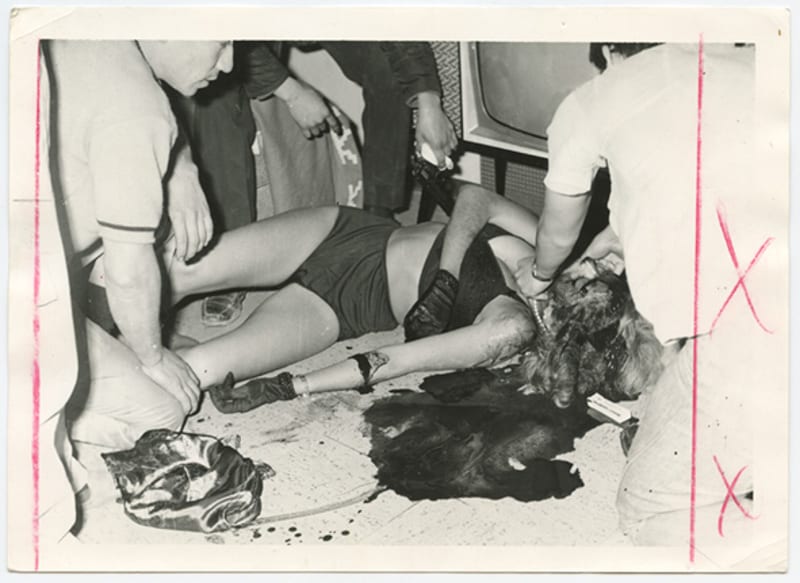 BF: I actually really love the drawings. I think they are powerful, if fucking uncomfortable. There is this layer or insidious behaviour being played out in the words you put over the graphic images. There is the push and pull between text and image that suggests a very uneven state of charismatic intervention where the parallels of the violence become an uncomfortable sing-song of meshed ideas on how we consume media…as you have mentioned. One perplexing question I had after going through the book…I did the drawings first…was…why did you feel the need to include the index- the thumbnail images of the actual photographs? I felt it was completely unnecessary. I feel like it was put there out of desperation and it kind of replicated the consumerism of violence. Then I thought maybe you put it there because often times the photography crowd of which you have been assimilated needs this literal translation…so…why did you opt to include that and tell me, why thumbnails? Did you want to point out the implicit necro-desire to get up close to it all?

CDM: I just needed the audience to understand that these scenes were real, that they did not come from my imagination or from a movie. In this case I felt I needed the forensic value of photography to ground my approach (look at me now, eh?). I tried to really separate the 2 parts so they do not interfere. In fact the booklet with some of the images (not all of them are included) is randomly placed in each book so the idea is that the reader at some point realizes that all these drawn situations happened in real life through the documents I provide. Your reaction to a violent drawing or a violent photograph or a violent lyric in a song is totally different and that is part of the game I propose, it is all again about language in the end.

BF: Not only language but…fantasy…This is the element of the work that I find interesting…to abstract the forensic and the pathology of forensic studies into the fantasy of drawing…to make it chimerical, playful…if unnerving…the value of the original image becomes nearly a plaything in this capacity…it is something that I struggle with and also endorse for my own interests. I endorse it because the literal notion or the graphic presentation of photography…not necessarily is a disinclined crutch for truth and has a capacity for belief for most people…its a relativization in theory that we consult…as if to say…I understand this image…I think its real. In using the drawings…you have abstracted this. Do you think however, that in doing so one can play the god over the image? Perhaps it is a fantasy that one could wield power over the representation of death by its abstracted nature? Is this not a dangerous game to play god over the image of death?

CDM: LOL, I didn´t realize I was going that far! I think we´ve been playing with the image of death since the beginning of the image itself! It is one of the big questions around existence so it makes perfect sense. What is the difference between my drawings in this book and the drawings in a super-hero comic book? The difference is that they come from reality. From my perspective I am minimizing reality with the drawings, or at least minimizing hyper-reality, which became so fashionable in the media lately, and that for me is to blame for the insensitivity of the audience and the lack of empathy towards the world we live in. The drawings somehow make the message included in the image rise again and gets rid of all the distraction that comes with technology.

BF: Perhaps you are not going that far, but your politicizing of the image, whether it is Mexican folklore and songs with a hefty dose of violent media thrown in are not simply small things when observed. You are playing with the identity politics of death. Can you explain to me what you mean by hyper-reality within the practice of using archive imagery and how it relates to the commonality of death and representation? I am actually not familiar with the term “hyper-reality” or its discontents…

CDM: I mean getting the detail of the blood and the dust of a child victim of bombing, for example.

BF: Attention to details. Ok. You have a penchant for working with archives, real and imaginary. The step towards this material is usually generated towards pigeon-holing your practice into the space between the real and the imagined. I think this is book/project is a step forward. It indicates that the drawings themselves are reactions to historical material rather than embedded within the larger context of a narrative you are using to push the agenda of photography and fiction, the pigeon–hole as it were. Do you find that this indicative of a natural progression in your practice or are you sick and motherfucking tired of having to be the go to person for this photographic…condition?

CDM:  Well, I think differently now compared to when all this craziness started and I became one of the standard-bearer of the fictionalized reality. My priorities have also changed. 6 years ago I felt I needed to validate my approach but I have the feeling now that both, the photographic language and the audience have evolved. Even World Press Photo is opening a contest for non-straight documentary reportage! I feel I don´t need to explain all this staging anymore and I am slowly moving to other mediums like video and drawing. I am just exploring because it was about to get boring.

BF: Do you ever get tired of making books or do you feel it has been a good currency for you, therefore to remain completely relevant in one small circle, you need to churn them out…I mean you probably make two or three a year…do you ever think…”Maybe I should focus my energy elsewhere a bit” or are you super pro-book, like book is your life sort of thing…?

CDM:  I have a lot of fun making books, less and less fun promoting them to be honest. I am really thinking of other formulas that could spare me that part. I think the book will always be part of my process because it is a very symbolic object for me, but that does not mean it will be the final and unique result of an idea or project. It is true that I made 3 books last year but that was just a coincidence. It was not planned, and that was the mistake. I could not really control when the publishers were pressing the green button and it is something I am not really proud of.
2016 has been a very difficult and interesting year for me and things are finally falling into place and making sense. I am slowing down indeed and, even if you maybe cannot perceive this because I am still running like a headless chicken, I am focusing my energies in other places. Now I am relaxed, still busy, but relaxed. My priorities have changed but I still need to clean all the mess I left behind.