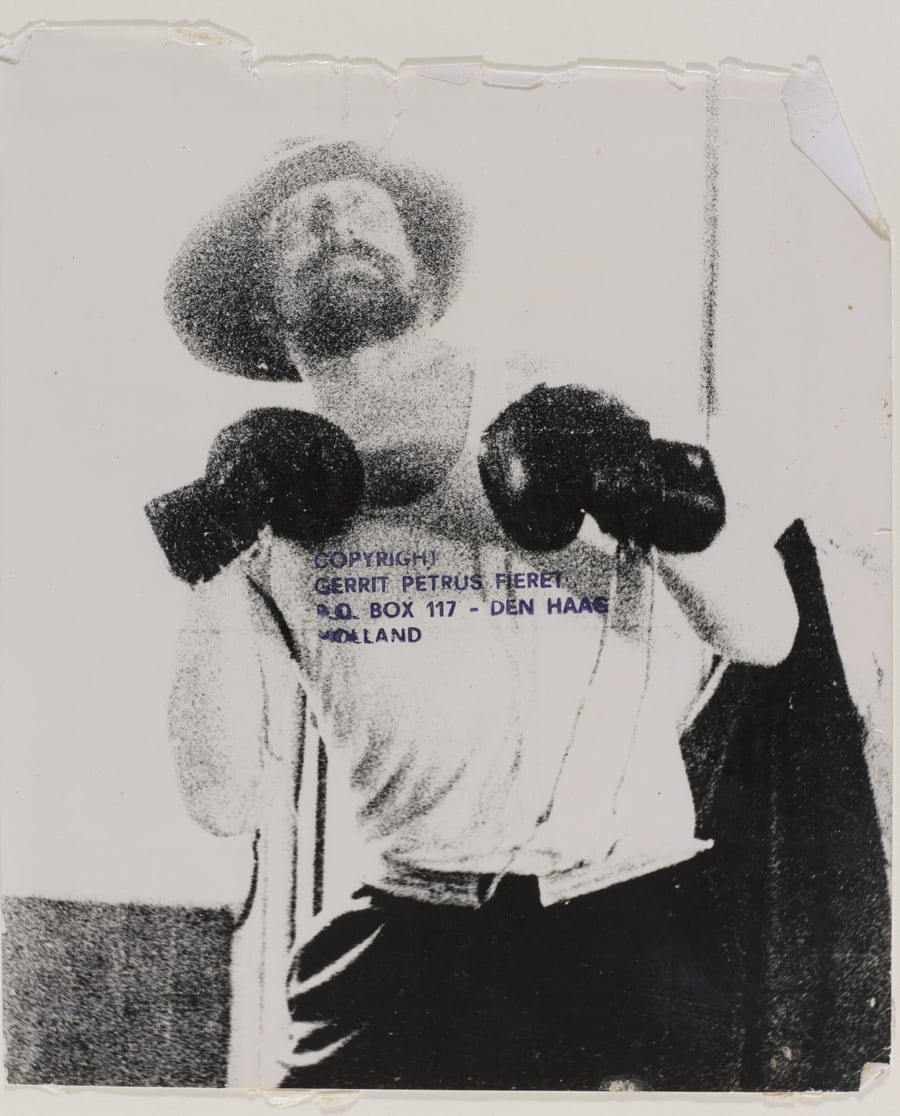 “The huge and quite exaggerated size of his signatures, the mushrooming of his stamps with the clear mention of the copyright “by G. Fieret” render apparent Fieret’s excessive need for recognition. Those are also signs of some sort of defensive strategy from a legal point of view – Fieret always felt threatened by the idea of being stolen or plagiarized”

Brad Feuerhelm: The Author As Iconoclast…Fieret was known for stamping the surface of his photographs with his own trademarking stamp that bore his name. It was perhaps an act of great ego, but also an iconoclastic gesture in the sense that he would use his stamp to cover the image of the subject underneath. This points to a very interesting synthesis between an artist’s desires to improve upon the original image with a self-referential mark. In Fieret’s case, as he believed that failure was often a key, how much of his act of self-vandalization was part of the larger point to destroy an image or was it in reality an act to further enable or glorify the photograph with his namesake?

Diane Dufour: Fieret manifested the uniqueness of his photograph. Besides the stamps, he multiplied his signature in black marker pen and sometimes spread various stamps over his subjects. Whereas signatures are usually kept for the verso of a print, Fieret obviously asserted his authorship on the recto, which can be read as a way to raise photography to the rank of painting or other arts. The huge and quite exaggerated size of his signatures, the mushrooming of his stamps with the clear mention of the copyright “by G. Fieret” render apparent Fieret’s excessive need for recognition. Those are also signs of some sort of defensive strategy from a legal point of view – Fieret always felt threatened by the idea of being stolen or plagiarized – but most of all from that of his self-esteem jeopardized by his lack of success. Beyond that, Fieret’s signatures and stamps also play an artistic role, both graphic and compositional, in the general structure of his print. They become part of the subject matter. “Rather like calligraphic tattoos, they can be found on the skin of the models and on the objects that have been photographed” as Francesco Zanot writes in the catalogue.

“Rather like calligraphic tattoos, they can be found on the skin of the models and on the objects that have been photographed”- Francesco Zanot

BF: Optical Obfuscation…The distortion of the images through surface abrasion, stamping, photographs covered in chemical stains, bird excrement, the pale printing, the ghost in the shell…how much of these acts to veil the image from the negative to the print itself were purposeful? The act of failure, already spoken about by Fieret offers the grand vision of serendipity, but could this consistent need to “hide” the image underneath make a larger case that Fieret wanted his internal world, his fantasy world to be completely his at the end of reading one of his images or was he interested in simply allowing images to de-stabilize streams of information by hiding their “hands”?

DD: According to Fieret himself, the accidental was key to his work. He constantly looked for it, at every level and every stage of his practice, both visual and chemical. Yet, in a way, he learned how to domesticate and master it. He got to know “bloody well what he was doing”, as he put it.

One of the main characteristic accidents he would provoke deliberately was the accelerated ageing of the prints: the yellowing associated with the use of out-of-date chemicals and photographic papers and the grey veil caused by prematurely stopping the development give the images the look of old photographs. It produces a kind of “has been” feeling. The frontier between past and present is blurred. Fieret seems to abuse and question reality at the same time.

Fieret also hides by reframing. Certain parts are excluded, others are plunged, during printing, into a black halo, or kept behind a white veil of underexposure. The present becomes absent. Certain subjects are immediately presented as inaccessible and lost. The print does not bear print anymore, it cannot testify. Fieret’s work is based on a language projected into past and absence. Its subjects are doomed to disappear, but their trace are kept, its prints bear the marks of constant abuse, while at the same time being the ultimate proof of a vanished fervency.

BF: Existential Decay…The photographs that Fieret made were often left to decay, either by chemical process or by the mouths of rats. Yet, within his images, the base image shall we say, there is also decay…photographs of walls crumbling, portraits with faces blurry and dissolving, would you attribute a large amount of this aesthetic to a post-war phenomenon? It is well known that Fieret spent time in slave labor camps during the war…how much of this aesthetic is potentially based on his past?

DD: As a child and as a teenager, Fieret went through dark times. His family disintegrated very early and he was sent by his mother to Jesuit

Institutions which were keen on discipline to say the least. Then during the war he was sent to forced labor camps in Germany. Not an easy beginning in life!

For sure these dramatic episodes reflect both in his attempts to exist through photography and in a sense of joy, a rage to survive despite everything which is obvious in many images.

BF: Disavowal of Purity…The clean image, the sanctified surface, the etiquette of control over the image are all purposefully kept from Fieret’s oeuvre, I almost feel that the alchemies that corrode his images are the same alchemies that enable them towards the spiritual, mystical and transcendental. Little has been mentioned about Freret’s brand of the spiritual, yet I see it in almost every image…What are your thoughts on this?

DD: I have some difficulties to follow you on that point even though we could surely say that Fieret engaged in a very genuine quest. Indeed, Fieret described his practice as Cartesian: “ This is Descartean, I pick up the camera – i.e., my third eye – observe and see myself in reality: ‘therefore I am’.”

“One of the main characteristic accidents he would provoke deliberately was the accelerated ageing of the prints: the yellowing associated with the use of out-of-date chemicals and photographic papers and the grey veil caused by prematurely stopping the development give the images the look of old photographs.” 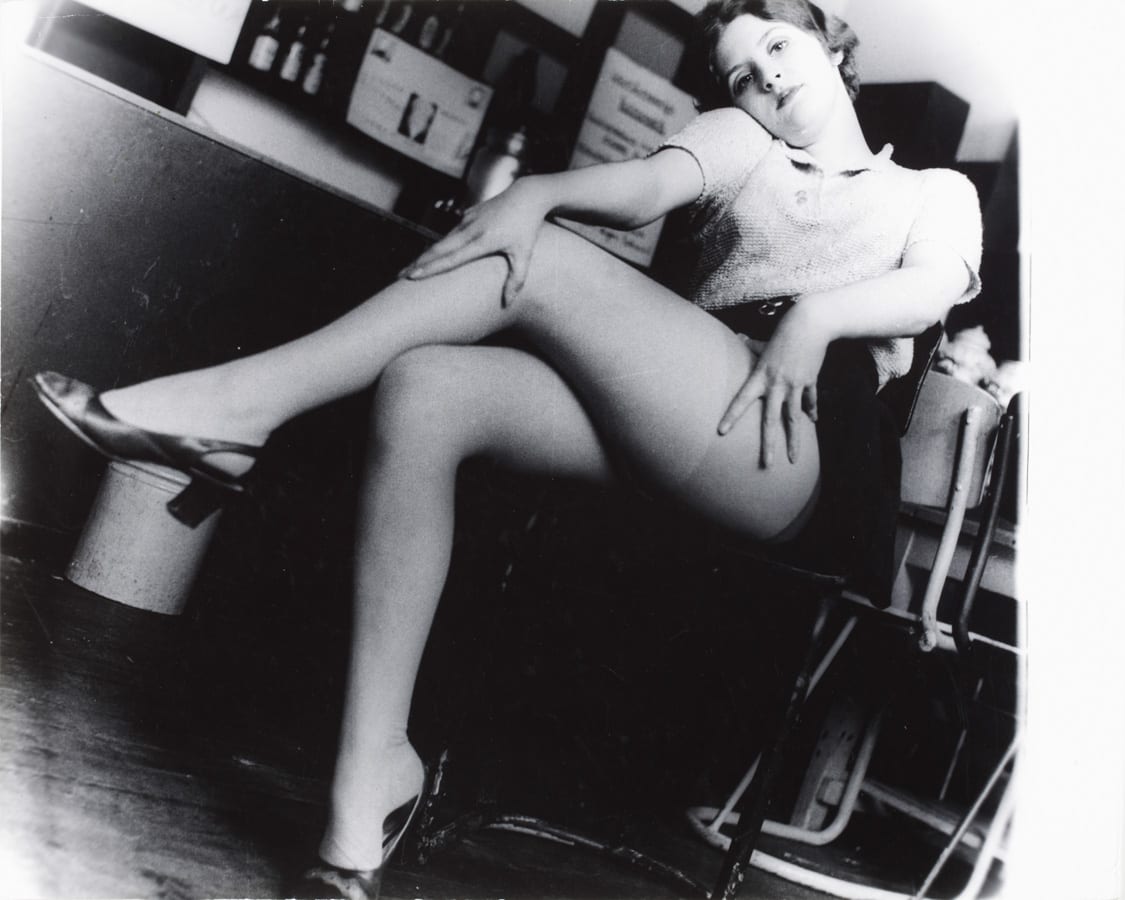 BF: Mania Longing…Miroslav Tichy, John Deakin, the Test Strips of Irving Penn all bear a very similar aesthetic to Fieret’s…again the unclean fragment. Fieret, like Tichy actually had a formal arts education though it is believed he never matriculated…I like to think of these two artists as “In Outsiders”…that is to say, they were both aware of the formulaic potential of the academy and practiced within it, so they cannot bear the term “outsider” like Adolf Wolffli or perhaps Eugene Von Bruenchenhein…do you suspect that Fieret spent most of his practice trying to unravel the formal in photography or that perhaps his undoing of the image was in fact overtly conservative due to the replication of serendipitous practice. His over-stamping at once seems at war with establishment, but also signifies its importance in absurd fashion….

DD: Fieret always had an ambiguous relationship with institutions and establishment. He did not graduate from his arts education but stayed one year in The Hague Academy of Arts. He condemned a so-called narrow minded and conformist art establishment but meanwhile, he initiated an extensive and strategic dialogue as Violette Gillet explains well in the catalogue: “Fearful that his photographs might not survive successive moves, Fieret first gave them to museums, then, in a sort of ritual of image activation, returned regularly to consult them. He dated them, signed them, and described them with hindsight. Addressing lengthy letters to curators, accompanied by documents, he accumulated monumental archives in each one of those institutions.”

DD: Totally, Fieret is moved by the frenzy typical of the street photographer. Yet, He is no hunter. Fieret never claims any superiority over the women he portrays but on the contrary, they establish with him a special link and collusion. Fieret does photograph with respect, like a statement of love.