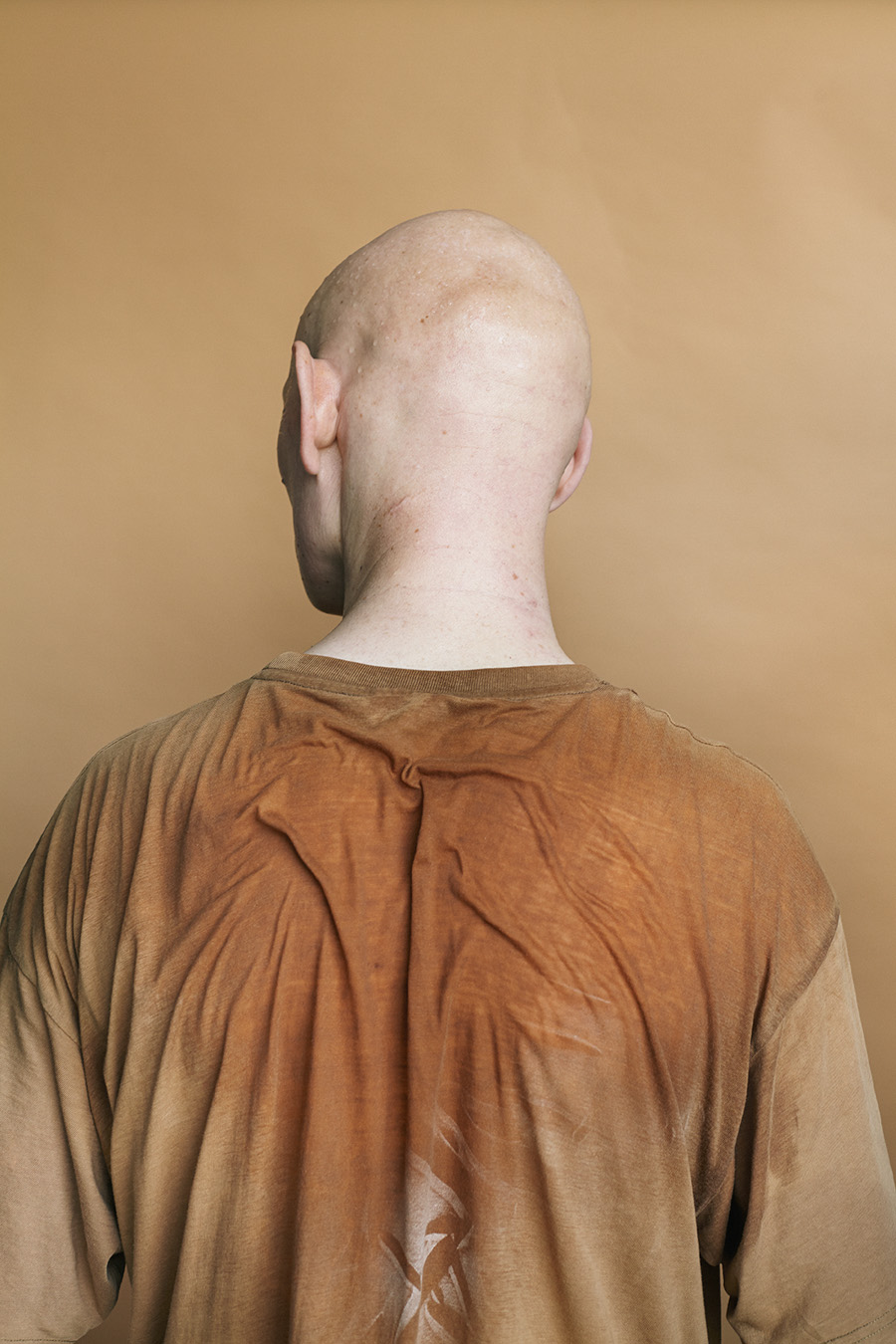 “I’ve always been taking pictures alongside my commissioned work. I carried my camera everywhere I went and photographed whatever I found interesting. But I only started thinking about doing personal projects when I moved to New York 5 five years ago.”

Marton Perlaki’s Elemer opens with a hand-drawn image of a red balloon. Taken from an early twentieth century children’s learning card, the image is both an enigma and a suggestion – the key to a storehouse of analogies. Elemer is set in a mysterious space that might be an alchemist’s laboratory: spheres suspended in glass jars, liquids bubbling out of flasks, strange objects nestling in corners. Other images suggest something different – perhaps a museum devoted to the four elements: air, water, earth, and fire. Stuffed birds pose alongside plaster heads, shadows and skulls. A suggestion of labyrinthine spaces behind locked doors. Presiding over it all – part puppetmaster, part exhibit – is the charismatic figure of Elemer himself.

ES: Can you tell me a bit about yourself and how you got started in photography? I understand you studied photojournalism and then cinematography.

MP: I am an overly curious 33 year old Hungarian photographer. Some say I am peculiar which I take as a compliment. I was taught not to talk unless you have something important to say. I like listening to people and I like asking questions. I was born and raised in a middle class intellectual family in Budapest. My mother is a violinist, she played in the Hungarian National Philharmonic Orchestra. My father was a well respected lawyer until his early death in 2003.

From relatively young age I was quite keen on expressing myself visually. I did graffiti  for a while and it did not hold my interest for too long but it made me realize how much I like drawing. At Grammar school I originally wanted to major in drawing and painting, however the year I got admitted the Catholic church repossessed the school so I had no other choice but to take up religious studies instead. All starting classes that year were theology majors.

The first year in Grammar school (at the age of 15) a friend of mine encouraged me to join a photography course that she had just started. I thought I could give it a shot. I was not really into it at the beginning; I was very slow at understanding the technical aspects of photography and it distracted me from focusing on the subject. The great breakthrough was in the darkroom where I started printing the pictures. It was magical how the photographs came to existence in front of my eyes.

After Grammar school I finished a one-year photojournalist course. I really loved being challenged by my classmates and I was very fortunate to have great teachers who were inspiring. I knew however that I didn’t want to become a photojournalist. My interest in staging situations and lighting, grew over this one-year period. I became familiar with the work of Diane Arbus and Richard Avedon. Their work really inspired me. I photographed my family, my girlfriend at the time, everyone who was available and was willing to sit in front of my 6×7 Pentax camera. If no one seemed available I was taking self portraits (they seem quite childish and embarrassing now). I was happy taking pictures but I wanted to learn more.

Luckily on my first attempt I got admitted to the University of Theater and  Film Arts in Budapest. I graduated as a Cinematographer five years later, in 2011. I’ve never really done any moving image ever since… An increasing urge has started developing in me recently to do a short film but it’s too early to talk about it.

ES: When did you begin taking pictures commercially? How did your first commission come about?

MP: I did my first editorial shoot just before I turned 18, but I am having a hard time remembering when my first commercial shoot was. I clearly remember though when my first international commercial shoot was. I was around 25 years old and I had been working on a magazine for four years with a few friends. Things started to pick up with the magazine (it’s called The Room) and we managed to distribute our issues in great stores in major European cities. One day I got a phone call from a Paris based South Korean men’s fashion brand, Wooyoungmi. They’d seen my pictures in The Room magazine and they wanted me to travel to Paris to shoot their spring-summer campaign. I got really nervous, but my excitement was stronger. Two weeks after the call I travelled to Paris and photographed their campaign…and three more seasons afterwards.

ES: And since then, you’ve gone on to work for clients like Helmut Lang, Dior, and Nike, and to shoot editorials for AnOther Magazine, Time, and Wallpaper. Have you always done personal work alongside commissioned and editorial work?

MP: I’ve always been taking pictures alongside my commissioned work. I carried my camera everywhere I went and photographed whatever I found interesting. But I only started thinking about doing personal projects when I moved to New York 5 five years ago. In New York all of a sudden I felt isolated from many distractions that occupied my mind in Budapest, but I was full of energy. This ‘sudden’ change in my life gave me a lot to think about in myself and my work as a photographer. After a few mini projects, and some emotional and professional rollercoaster rides I began working on the Elemer series which is my first finished personal series.

ES: Can you go into a bit more detail about the emotional and professional roller coaster rides? Was it difficult to balance personal work with your professional commitments? What’s the relationship between the two?

The greatest challenge for me so far is to harmonize my personal life with my ever-growing work as a photographer. It took me a while to accept that the lifestyle I lead as a professional photographer (constant travelling for instance) comes with certain sacrifices on the personal side. I come from a traditional family background, which is something that my career at this point doesn’t really allow.

When I have a lot of commissioned work it can be hard to find the time to focus on my personal projects. I know myself well enough now though that when I feel overwhelmed by commissioned jobs I take a break to work on my personal projects. This, however, means I am turning down jobs, and investing money in my personal work. At this point, that can only be sustained for so long, and after a while my financial situation leads me back to doing commissions. I don’t mean to say that working on commissions is bad, but sometimes it can be creatively challenging with all the egos involved in one picture.

“I like to think of Elemer as a symbolic character in the series. His appearance instantly made me think of fragility. This is one of the reasons why I found him perfect for the series as the one and only human protagonist.”

ES: So let’s turn to Elemer. How did the project come about? Did it begin with the discovery of Elemer, your model and collaborator?

MP: It’s interesting that we were talking about commissioned work before. Actually the whole project started because I desperately felt the need to work on something personal after many commissioned jobs. I accidentally found a bunch of cigarette cards from the first half of the century. The ones I found display useful household tips and wacky bar pick up tricks. On first glance the images on these cards look very silly and nonsensical but when you flip them over and read the corresponding text the pictograms suddenly make perfect sense. This discovery was the trigger to start the whole series of Elemer.

Elemer himself only came to the picture a little later in the process. I had already started working on the still life photographs and I knew that I want to build the series on one model/protagonist. Just when I was starting to get a little nervous of not finding the right person for the series, I saw a post on facebook of Elemer standing in an elevator. It was an eureka moment. I got in touch with him and we started working almost straight away.

ES: It’s interesting that the still lives came first, because there is a really strong sense of connection between them, and it’s based in a kind of visual-verbal game that threads throughout the book. The first few images, for example – a balloon, a bird, an egg in a jar, a bubble, and a skull – are connected by analogy (balloons and birds both fly) visual similarities (balloons eggs, bubbles) and names (many of them begin with the letter ‘b’). Was this your intention from the beginning, or was it something that emerged as you were editing?

MP: My initial intension was to create a kind of visual metaphor around the topics of vulnerability and fragility. This is how I ended up photographing these objects and mini installations. Later when I started editing the series I noticed the playful connection between the objects and their names. The name game came even later because I kept referring to the objects by their Hungarian names (Bird= madàr, Bubble= buborèk, Balloon= lufi). I was really pleased when I came to realize that the English names of the objects could actually work very well as the title of the series – a playful, childish title, which touches subjects that are a bit more serious. I’ve found this duality entertaining.

ES: What’s the role of Elemer’s character in the book? And what was it that you saw in Elemer himself that convinced you he was the right person?

MP: I like to think of Elemer as a symbolic character in the series. His appearance instantly made me think of fragility. This is one of the reasons why I found him perfect for the series as the one and only human protagonist. His peculiar appearance in these staged situations adds a mystical, enigmatic layer to the series. He is a performer in front of my camera.

ES: What were you able to do with Elemer that you aren’t able to do with commissioned work? Is it about having a certain level of creative control over the kind of pictures you produce?

MP: I was able to experiment and I had the time to do so while I was working on the Elemer project. This was a major difference compared to my commissioned work. I was lucky enough that Elemer had the patience and enthusiasm to cooperate. The creative control was also a factor. As blunt as it sounds I didn’t think about pleasing anyone but myself.

ES: So what’s next? You’ve exhibited some of the photographs from Elemer in London. Have you got any more exhibitions and projects up your sleeve?

MP: I am really happy that the book received such a positive response. I have some new ideas for projects in my head but it’s a little too early to talk about them. Webber Gallery will probably bring some of the prints from Elemer to the Unseen Photo Festival and there are a couple of exciting collaborations coming up for this Autumn but I am not supposed to talk about them yet. I also need to refill my bank account… hahaha