“I think a metaphor for this time in our society would be a tree that’s under stress. When that happens the tree puts out a lot of seed. In this anxious age that’s probably what’s happening”.

BP Laval is a painter of transgressive and cinematic imagination. His work hints at what I refer to in the interview as a sort of neo-fauvism. This is to express the idea that his choice of color palette and the exploration of portraiture and also the sexualized body politic disregards recent trends in painting, in particular, modernist and post-modernist abstraction. It feels as though this bucking of recent movements and a anticipation towards the use of the body in a somewhat garish and gestural mode point to a dissatisfaction with the recent past while also assessing the contemporary infatuation with media, cinema, pornography and the violence of the painterly brush stroke. It seems that he is on time to herald a new look at representation and constructive consumption of not only painting, but images at large. His work is currently being exhibited at the Fortnight Institute in New York, an experimental platform that also looks towards re-examining representation and tends and favors artists gaining ground from the periphery.

Brad Feuerhelm: Your work often reminds me of a dark neo-fauvism in which all the colorful gesture of the early modern period is replaced with a background and figures that often drift into and out of the existence of representation through their “slippage” into the void of color field painting reminiscent of Bacon and even the suprematists at times. That is to say the way in which they materialize and de-materialize on the same plane creates this in my mind. What are your thoughts on this sparse, yet direct way of working with figure and ground relationships? To what value does the paint become formal over ideological?

BP: I live with a sexy, strong, beautiful woman who turns my crank. So what happens is I get to the studio, sit in my chair in front of the canvas, and start thinking about her thighs, and ass, her lips, pretty soon I’m thinking about what kind of vulgar smut I’m going to paint today. It’s a vicious cycle that I don’t know how to get out of.

BF: Is there something you wish to communicate by working from what we see as something akin to video or set “pornography” represented in painting? That the format of sexual situations depicted looks clearly twentieth and twenty-first century and perhaps part of our understood cultural governance of sex having been awash in supersexvideo since the 70’s suggests a phenomenology that you are working with over perhaps that of a hyper-active sexual narrative. Is there a social commentary or are you really into pornography?

BP: I like the erotic charge that are in these paintings. I don’t over think any of this, I really just go with what’s in my head at the moment. Of course we live in a very sexed up world where we’re bombarded with sexual imagery. I think a metaphor for this time in our society would be a tree that’s under stress. When that happens the tree puts out a lot of seed. In this anxious age that’s probably what’s happening.I often think of the paintings as independent worlds or theatre vignettes, where colour is also an actor in the scene. You can enter them, and become part of that moment. I post them on Instagram, and one of the things I like the best is when people tag each other, and leave comments like “That was us last night” or “This is what I want”. 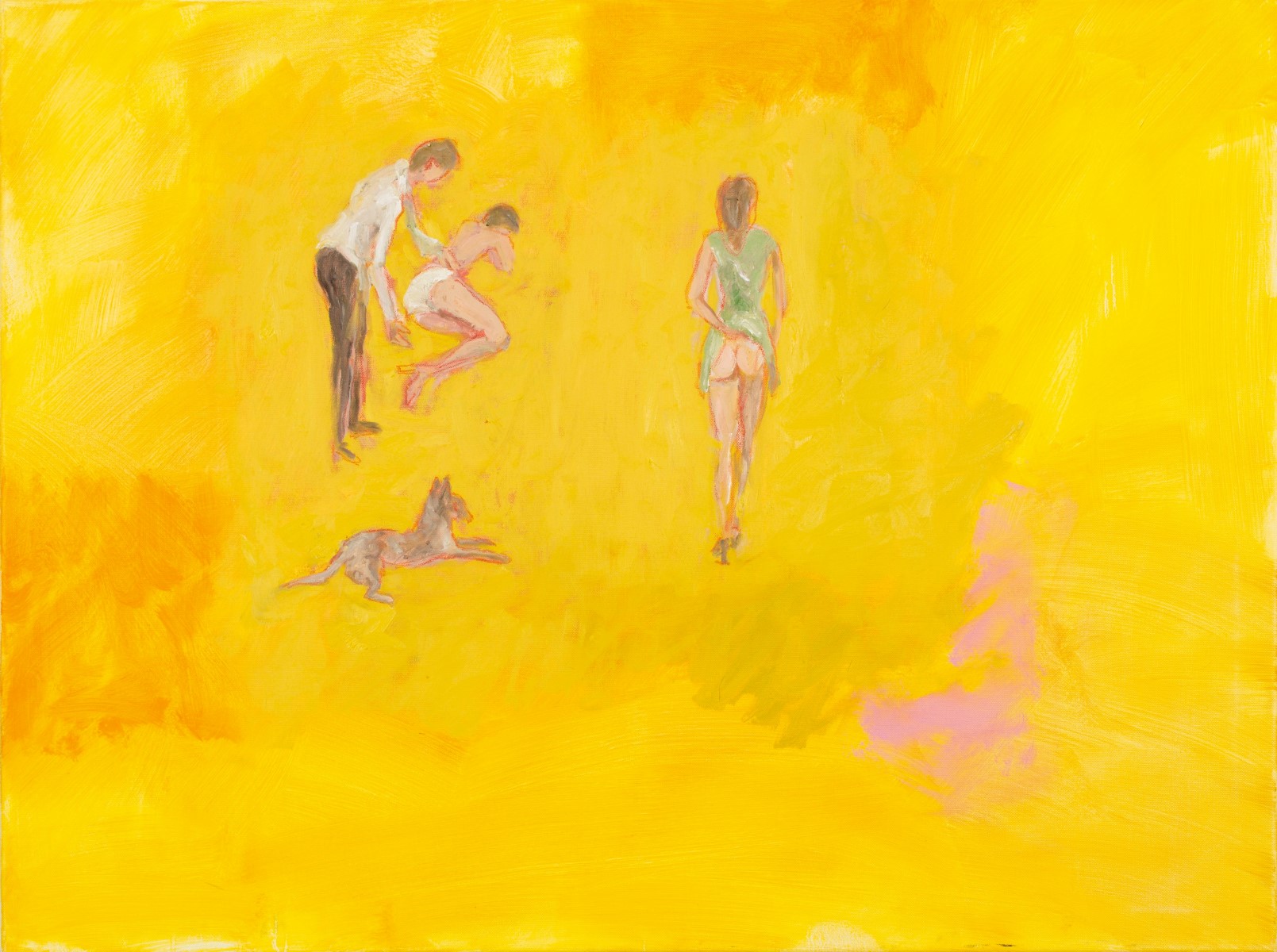 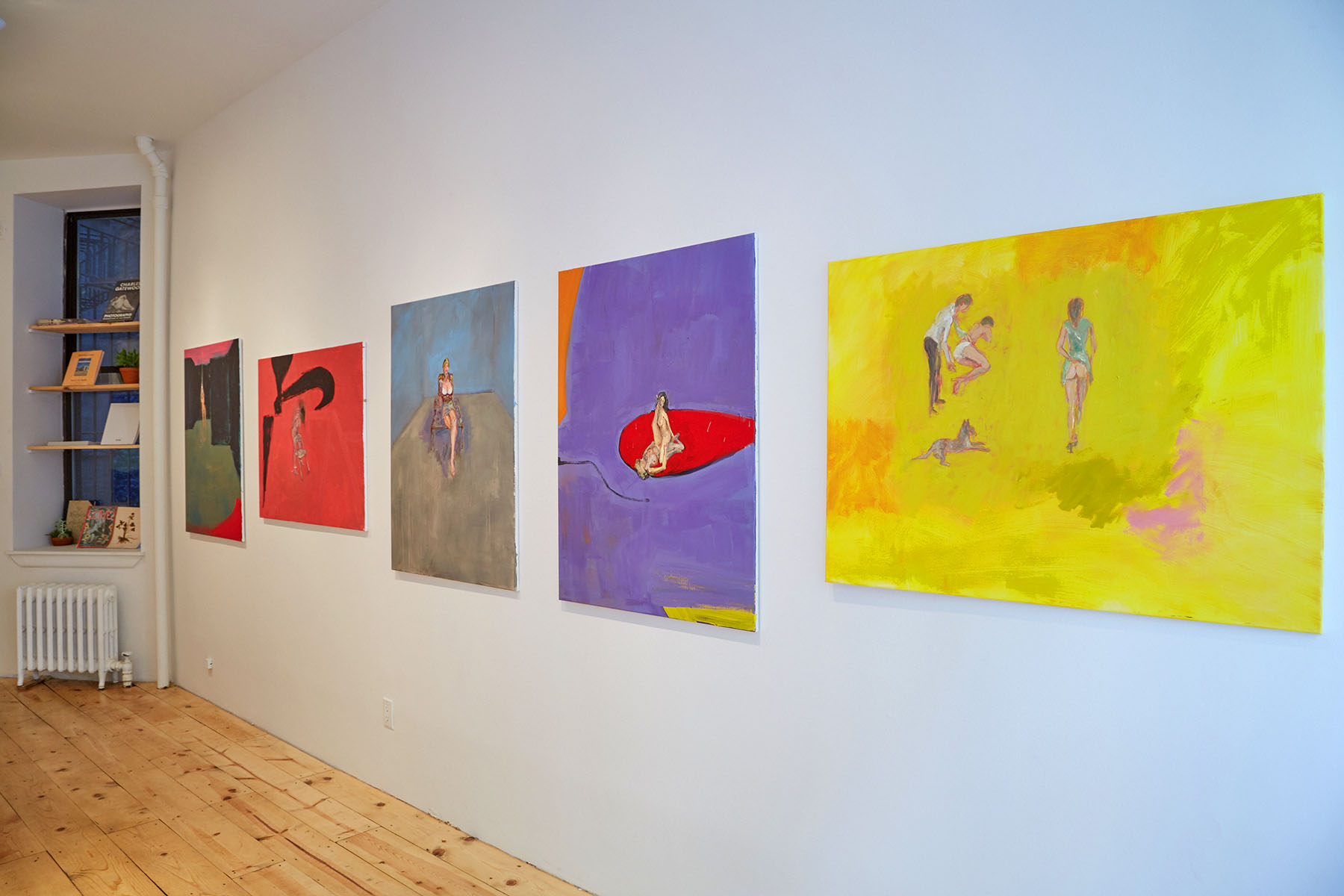 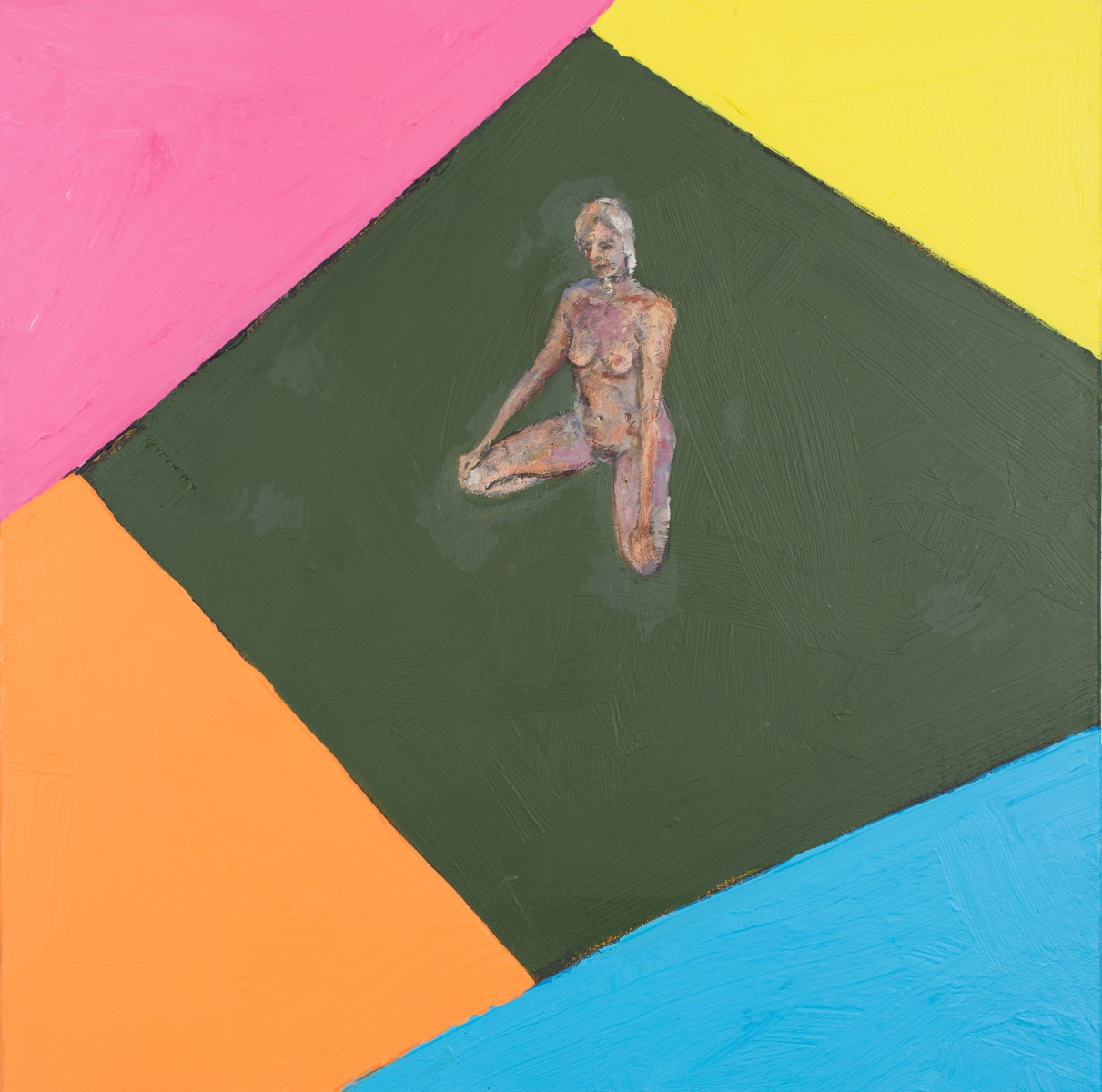 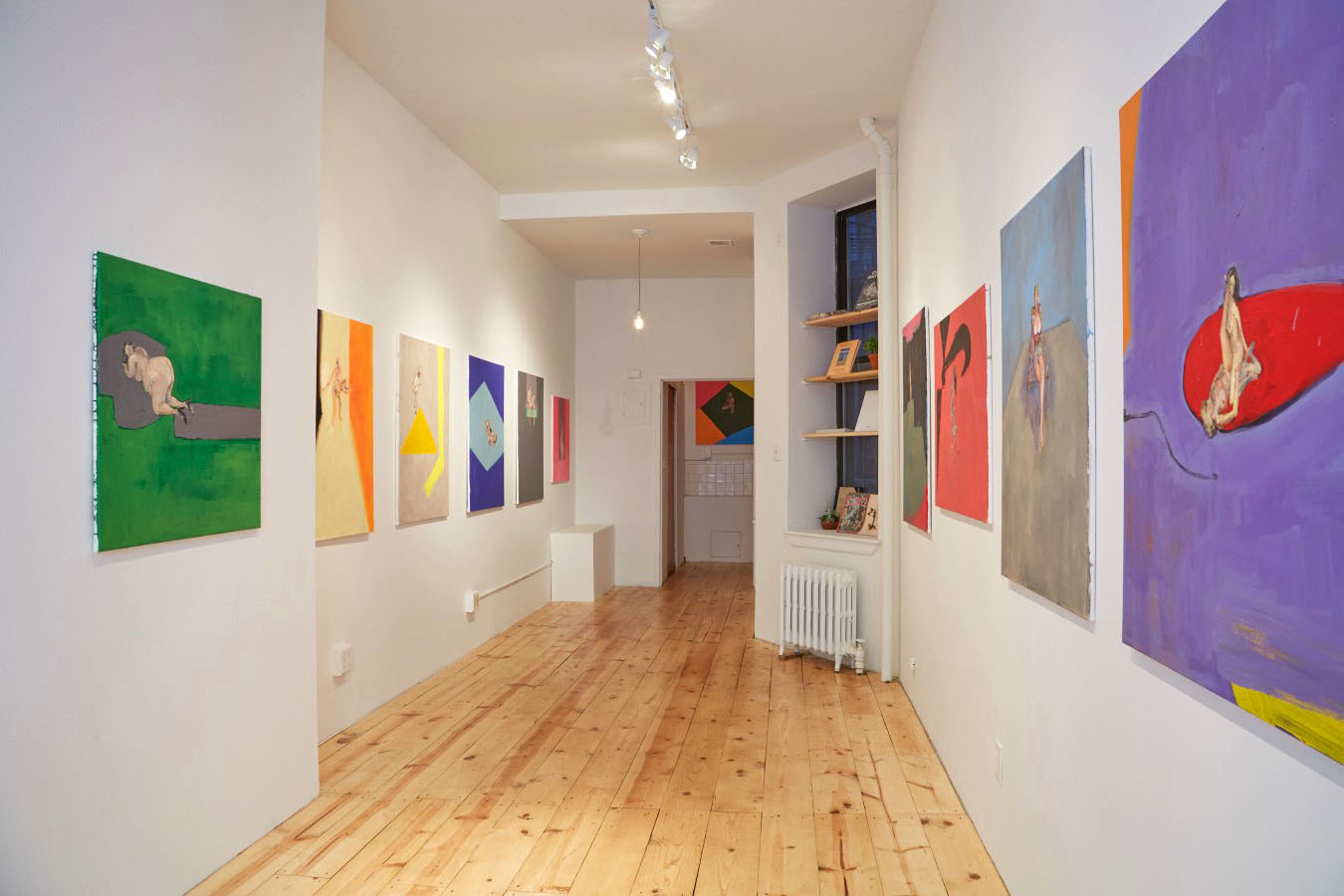 ” I often think of the paintings as independent worlds or theatre vignettes, where colour is also an actor in the scene. You can enter them, and become part of that moment”.

BF: You’ve begun working with the Fortnight institute. The organization is notably an outstanding collaboration somewhere between feminist politics, occultism, and renegade practice. How did it come about that you would work with them?

BP: I met both Jane, and Fabiola when Richard Prince started collecting my work. When they opened Fortnight Institute and offered to show the paintings I couldn’t imagine a better place for the work to be. They’re 2 smart, interesting cats, that are up to all kinds of stuff. Fortnight Institute is a place to keep your eyes on, I’m sure future programming will be stimulating, titillating- I don’t know what they’ve got planned, but I bet it’ll be good.

My show which is called Basil Vaseline is up until June 17. One of the highlights while I was in New York for it was to meet Betty Tompkins at the opening. Here’s a link to the gallery, if you’re in NYC go check it out.
http://fortnight.institute

BF: There is a rumor that all great perverts think alike…have you been selling works consistently or is it a challenge with this kind of thing? I believe you paint quite a few works a year and that your Instagram is widely followed by other artists such as Walter Robinson, Ed Templeton, Raymond Pettibon, Betty Tompkins, and Richard Prince. Talk to me about commerce…it goes hand in hand job no? Have you been censored at all on any of these platforms by the moral oligarchy?

“I post them on Instagram, and one of the things I like the best is when people tag each other, and leave comments like ‘That was us last night’ or ‘This is what I want’.”

BP: Social media is great, and I’ve been posting without self censoring, what’s finished at the end of the day. I’ll often think am I really going to post that, feeling embarrassed, – huge dildo, spread legs, open pussy- and then go, what the hell it’s social media if you can’t post shit there then where can you. And yes I’ve had a few things removed. Richard Prince has bought a lot of work, and other than that I haven’t been trying to sell anything. It’s been so nice just to paint, and not care about what anybody thinks, or making sales. Having said that the show at Fortnight is almost sold out- nice to know people are into it.

BF: The easy question, but one I’m really interested in…do you draw inspiration from things non-Internet? Does photography play a role or perhaps other artists? Needless to say, I’m sure you’ve seen Adultworldartsexyvideotime, so outside of porn…What else gets you “up” to paint?

EXPLORE ALL BP LAVAL ON ASX