Moriyama admits that repetition is his way of working, and that his impulse to reproduce his surroundings today is much the same as it was when he got his first camera, in junior high.

The saturated electric blues and magentas leap out at you, along with the impenetrable red door and its adjacent expired olive-green alligator. A trilobite-like creature lies against lacquered lapis, its prehistoric, organic shape contrasting not only with the shiny surface but also the more formal, graphic black-and-white pipes it is paired with. There are deep-red roses and ruby-lipped geishas, and bad haircuts, billboards, and glossed lips galore. Spread across multiple panels, the effect is slick and hard-edged, especially against the woodsy setting of Paris’s Fondation Cartier. As a whole, it’s a bit like the frisson felt as an adolescent searching the drugstore aisle for the latest shade of Wet n Wild—the tingle of something both puerile and prurient just below the surface.

The Fondation Cartier’s Daido Moriyama exhibit, Daido Tokyo, is two part (and up until June 5, 2016): Tokyo Color, these digital color stills, and Dog and Mesh Tights, the photographer’s black-and-white multi-screen slide show. The latter provides the internal dialogue to the color’s visual Tourette’s. Both are filled with Moriyama conundrums, with his signature pipes and cul de sacs. 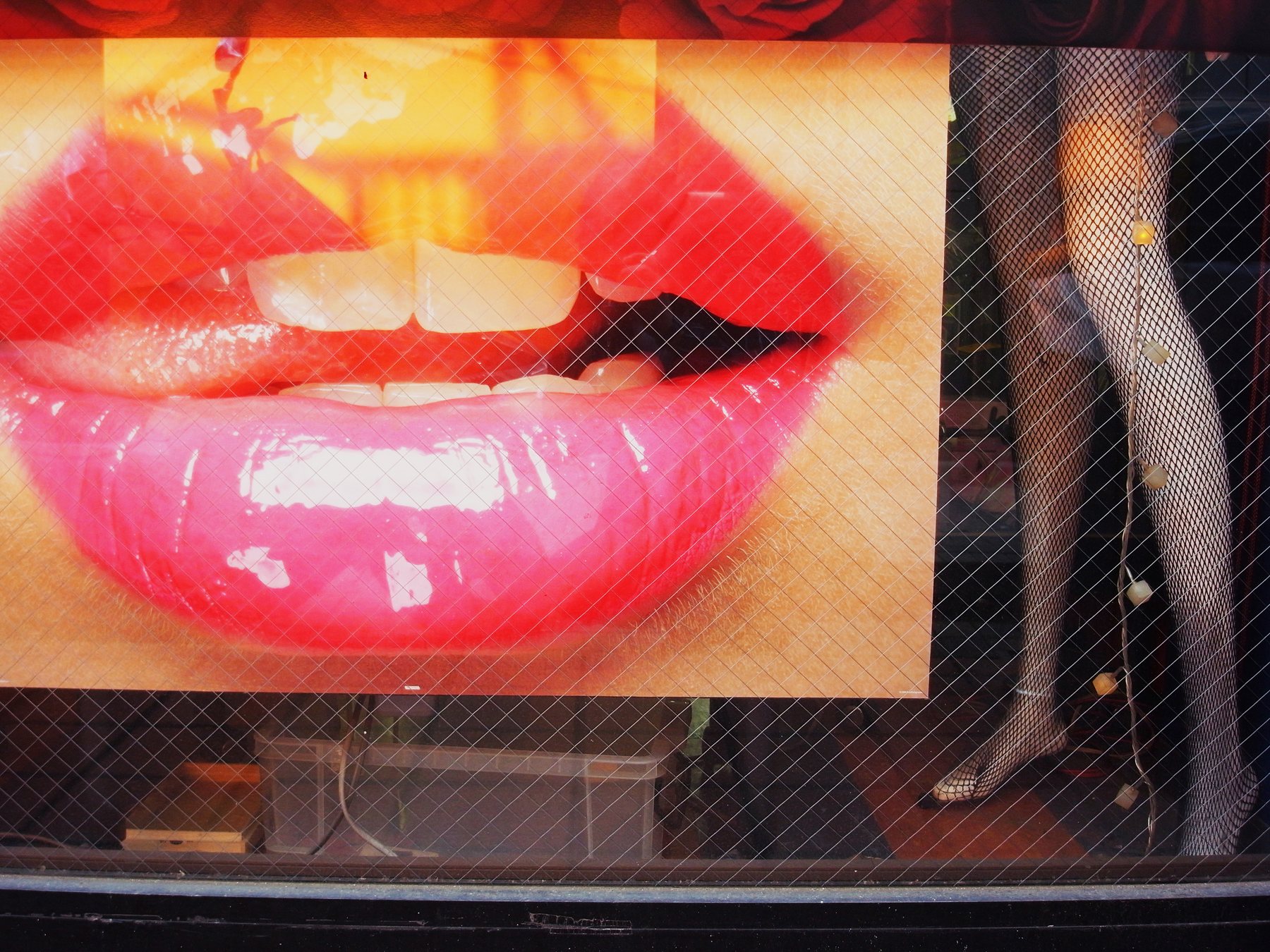 For Moriyama, photography is less art than reproduction—in all senses of the word. He claims the copy as its essence and Andy Warhol, the godfather of the copy and who appears in Tokyo Color, as his inspiration. So it makes sense that the many Moriyamaisms seen here—the billboards, pipes, mesh tights, and and tangled wires, have re-appeared in his work throughout the years. His colors—the olives, blues, and magentas—also repeat throughout. He even copies himself, photographing his shadow and reflection. In the past, Moriyama has even copied his own copies, eagerly reproducing his images on T-shirts and postcards. His procreation of pictures has also been prolific: Moriyama has photographed nonstop but for a two-year period during the seventies when he became a junkie; shortly after his Sayonara Photography, when he was sure he had little more to say with the camera, he was lured to drugs by a “bad friend”—eventually to be saved by a Pentax.

Sexuality (that font of reproduction), both primordial and titillating, permeates his work, some of it quite Freudian: Tokyo Color’s bare-breasted geisha is juxtaposed with snarled exhaust hose on one side and roses on the other. There is the menstrual-blood-like stain that spills across one frame; the narrow red-carpeted stairway leading inward to an undisclosed (if not unreachable) destination; the ooze and the open mouths that occupy other photos (not to mention that impenetrable red door). There are the tunnels of Dog and Mesh Tights. The photographer is also fond of (Freudian) holes: mesh tights, mesh gloves, mesh fences, mesh screens…. The mesh inherently copies itself, is itself a repeating pattern—one of many in his images.

“I try not to take photos,” he has said, and it’s these seemingly “amateur images” (along with their undertones of adolescent desire) that resonate for him most.

Moriyama admits that repetition is his way of working, and that his impulse to reproduce his surroundings today is much the same as it was when he got his first camera, in junior high.“I try not to take photos,” he has said, and it’s these seemingly “amateur images” (along with their undertones of adolescent desire) that resonate for him most. A visual scavenger of sorts, Moriyama sees the world not as one but scattered: “We copy these scattered worlds through photography.” 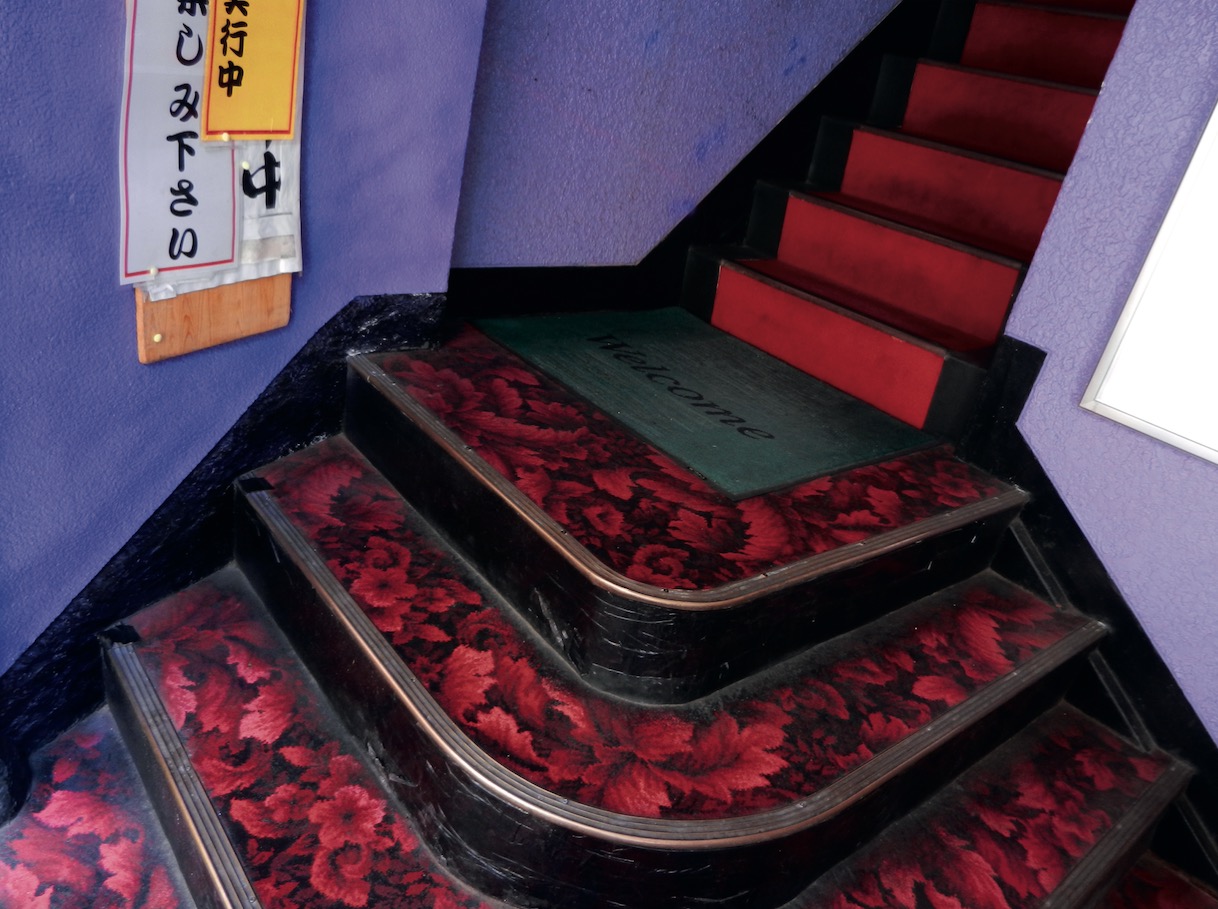 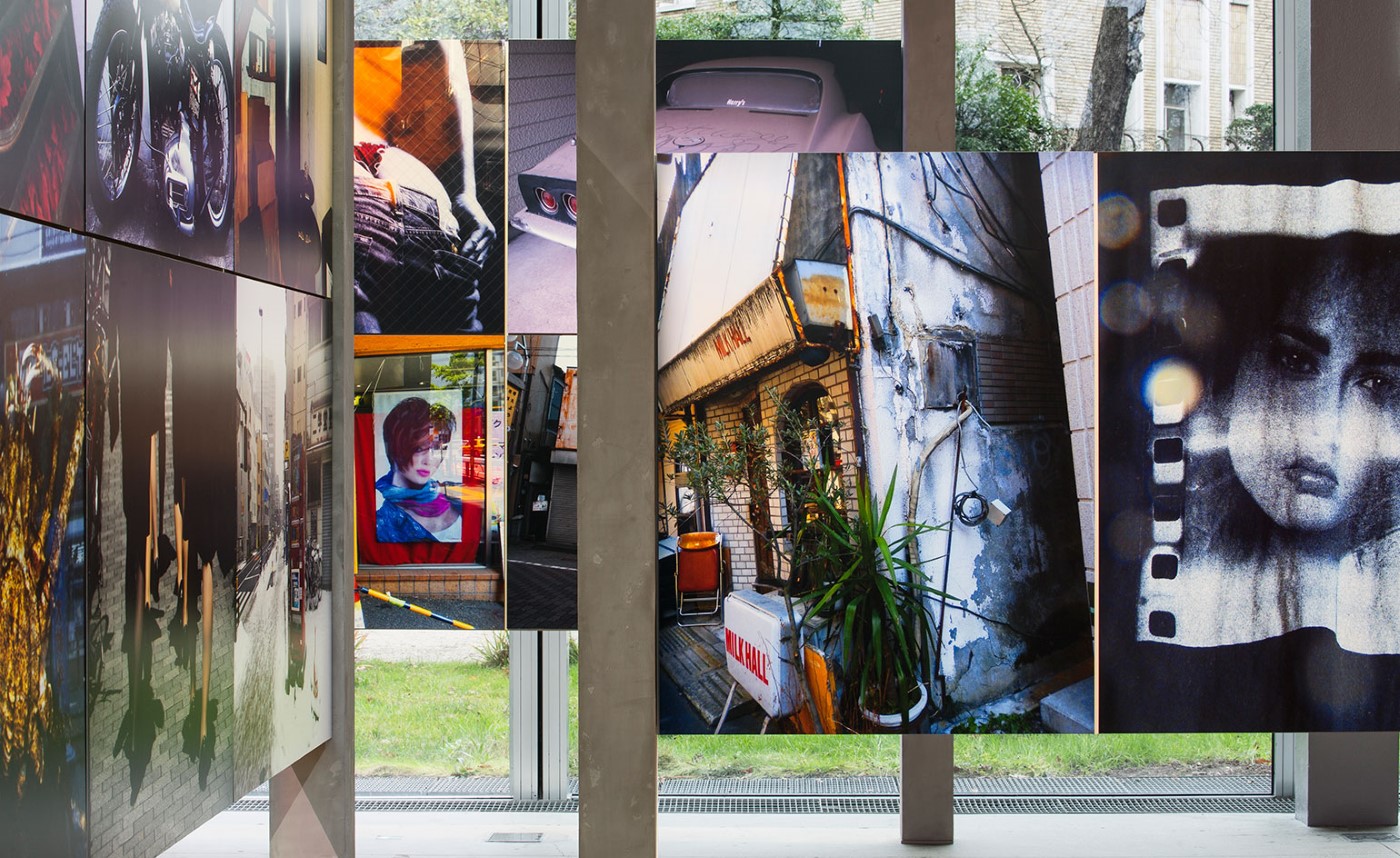 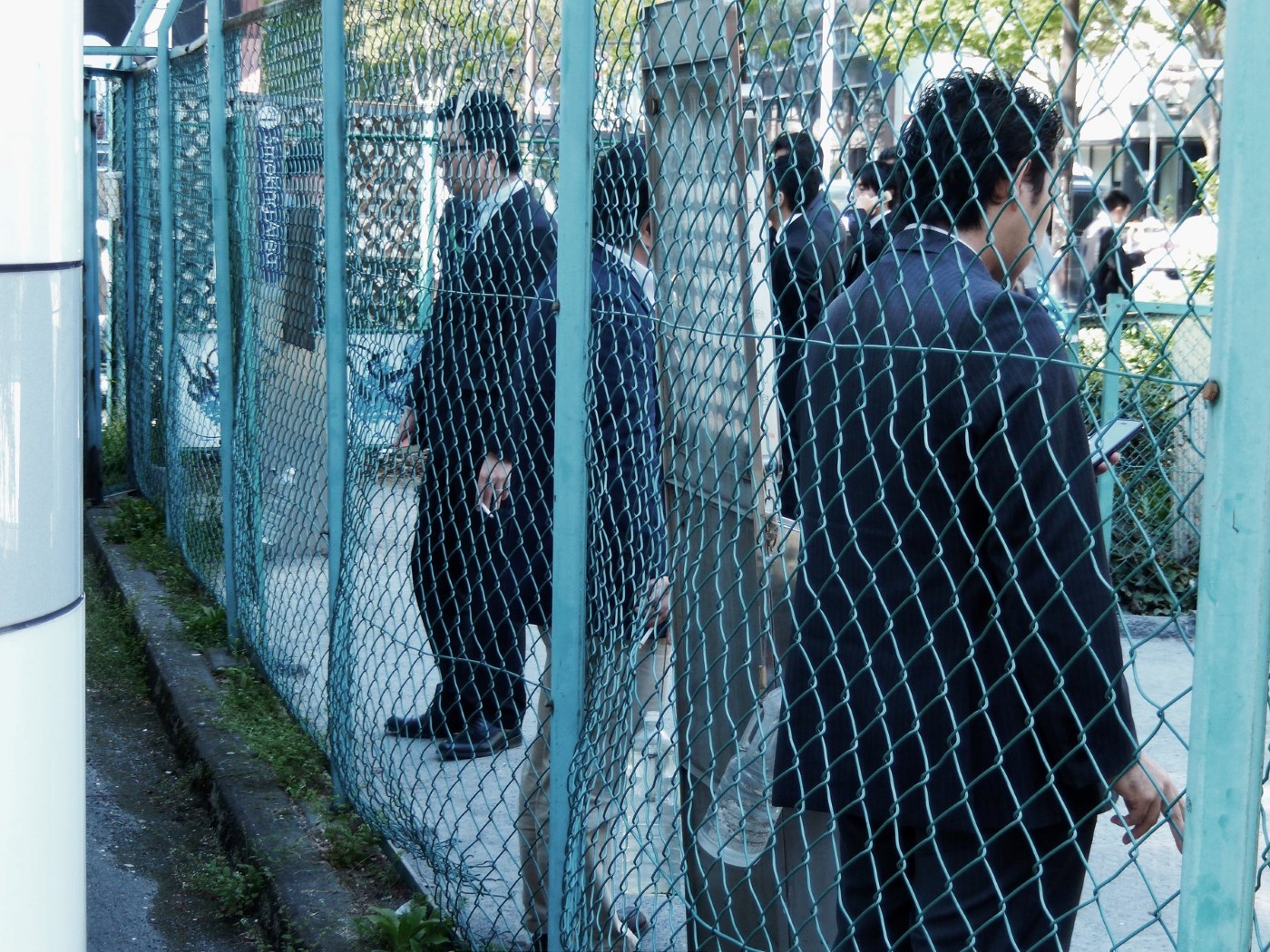 Shinjuku, the neighborhood where he makes most of his photos, is certainly a scattered world, with a sprawling train station, surrounding high rises, a red-light district, and scrappy bars often frequented by artists. Shinjuku was almost leveled in World War II and became a nexus of protest in the 60s. Today it’s plastered with ads and the neighborhood to which Moriyama returns daily, as regular yet transient as the train commuters. He refers to Shinjuku as the “landscape of my heart,” and he maps its remnants in the lens of his camera, filtering them categorically: billboards, knotty vines, dead ends, decaying animals, dogs, mesh tights—but leaves it to us to posit the connections. Though he will counter that no meaning or connections are intended and it is the randomness he embraces. (Even the editing of his books, he will tell you, is random.) His color pictures appear two and more to a panel, each without explicit relationship, but whose compiling and juxtapositions convey what a walk through Shinjuku might: of being hit with disparate images and colliding colors and stimuli. The woods Tokyo Color is set against only underscores the untamed desires below the photos’ surface (much like Akira Kurosawa’s forest setting in Rashomon—which also celebrates the notion that “truth” has more than one interpretation and begs the viewer to question the veracity of them all). He describes Shinjuku as filled with the presence of Shinto-like “shadow spirits.” Like Moriyama, Shinto relies on rituals (much like the photographer’s daily perambulation through Shinjuku) and sees both the natural and inanimate world as being inhabited by spirit essences that compose the complex fabric of our everyday lives. The photographer’s Shinjuku is a place detached from time, and his images detached from context. It’s a world that is neither here nor there, a sort of netherworld between the conscious and the unconscious, much the way Moriyama’s pictures fall between recording and art.

Tokyo Color’s pictures, slippery seeming and shuffled together as they are on panels, recall not only Shinjuku’s own randomness but also its advertising, which itself exists to arouse and seduce. Desire limns the exhibit’s color and imagery—the curlicues of smoke, the Kleenex.

Tokyo Color’s pictures, slippery seeming and shuffled together as they are on panels, recall not only Shinjuku’s own randomness but also its advertising, which itself exists to arouse and seduce. Desire limns the exhibit’s color and imagery—the curlicues of smoke, the Kleenex. But lingering beneath it all is also the hint of decay—from the overripe olive greens and reds to the ochre-yellow ooze emanating from the alligator—as though something is just about to turn. In its entirety, amid its setting, Tokyo Color appears a sort of tawdry koan. It’s one for which Moriyama would say has no ultimate meaning, though he has admitted, “I don’t know how you say ‘nasty’ in English, but I want to take a lot of nasty photos.”

With Dog and Mesh Tights, Moriyama says he approached its pictures—from Los Angeles, Tokyo, Hong Kong, Taipei, Arles, and Houston—much like a wandering dog. But the images are not alone here: They are bathed in the street sounds and birdsong of the slide show’s soundtrack. And as in his colorwork there are the juxtapositions, between adjacent images and also between panels. There is also the thinly veiled sexuality: the jeweled lips, the sharp stiletto, the streaming showerhead, the man sucking the fat cigar, the slightly ajar doors, an X-ray (reproduction, again)…. The high-contrast black-and-white is filled with Moriyama’s standard bore and boke, mesh tights and pipes, but also things once desired but now cast away: a dead bird, a TV set, the soles of shoes, the homeless people.

There are deep-red roses and ruby-lipped geishas, and bad haircuts, billboards, and glossed lips galore. Spread across multiple panels, the effect is slick and hard-edged, especially against the woodsy setting of Paris’s Fondation Cartier.

It’s as if Tokyo Color is the before—the juicy promise—and Dog and Mesh Tights the black-and-white and withered after.

Moriyama is fond not only of collecting images in his camera, but also of making collections, as his prolific production of photobooks testifies. His Paris show prompted him to make a book, Record 31 (Akio Nagasawa Publishing, 2016), of the black-and-white images he made in Tokyo before and in Paris during this exhibition. He refers to the compilation as “a tentative tale of two cities.” There are the lips, the stilettos, the mesh, the dogs, but this time also the Parisian rues and facades. And there is also Moriyama, in reflections and shadows.

Today, Moriyama is now 78. He acknowledges his nightly six-hour walks through Shinjuku have been reduced to four, and one wonders if his numerous shots of dead ends and closed doors, and the sense of something about to spoil that filters through both his recent color and black-and-white work, in addition to his self-portraits in shadow—that most fleeting and ephemeral of matter (yet also recalling the light and shadow of photography itself) also reflects a man who is coming to terms with his own limits, both physical and temporal. Perhaps, too, this hoarding of imagery, or “poetic cataloging,” as it’s been referred to, is Moriyama also taking stock of his own life, literally recovering the ground, and gathering (and reproducing) memories, and emotions that have fueled his work all these years. Or perhaps, to paraphrase Freud, “Sometimes a pipe is just a pipe.”

Marlaine Glicksman is an award-winning filmmaker, screenwriter, photographer, and journalist based in New York City. She is currently in post-production on The Commandment Keepers, a feature documentary on the highly observant African-American synagogue in Harlem.

EXPLORE ALL DAIDO MORIYAMA ON ASX