“It is as if there was a missed opportunity to shrine build a myth to foreign incandescent lands where the birds awkward chirp and the come-along chanting will forever be dulled by the perseverance that these creatures in reality were only humans masquerading as something greater and that by alleviating the myth of the suicide, they should become more inalienable to my world”.

There is the smell of eggs and coffee in the morning. I am hunkered down in my trusted yellow blanket, its edges fraying through years of use. It still smells of my formative years today. The blanket becomes more of a veil from which I peer out into the world that seems adult, foreboding and oddly unknown. I can hear my grandparents in the kitchen. My mom is away, but it doesn’t matter as I watch the singing and careening figures in various colors cavort across the outwardly pregnant screen. These old televisions…why do they protrude at me?

There is color, light, and magic interwoven in carefree songs and large alien-like faces. There is the magic of the television prop set and the belief that somehow these creatures are my friends. On occasion, I learn forward out of my blanket to touch the cold television screen and my friends seem to respond. They wave to me and encourage me to sing their song. It is the singing that brings us together. And, I start to believe that in my shroud that I am like them and that if the glass did not separate us, I could leave the adult world behind.

As I grow older, I am told that if I look closely at the hanging dwarf in The Wizard of Oz that I will clearly see that there is a crane in delicate reserve. The producers of the film have gone on record to disavow any notion of a crane in repose in favor of letting the true historicism of the suicided dwarf remain. With this information, I am at odds and I can only recollect the youthful times huddled in my protective yellow cloak watching the Teletubbies from my grandparents bloated television screen, its parabolic surface inviting and cold at the same time. I remember that tinkywinky never committed the suicide that was shopped in the news rags at the time and somehow I feel sad by this. It is as if there was a missed opportunity to shrine build a myth of foreign incandescent lands where the birds awkward chirp and the comely come-along chanting will forever be dulled by the perseverance that these creatures in reality were only humans masquerading as something greater and that by alleviating the myth of the suicide, they should become more inalienable to my world. It is a tragedy in reverse and a grievous ending to my childhood and I still quiver at the smell of burnt eggs.

Charlotte Lybeer’s “Epidermis II” for APE is not about teletubbies or suicide, but it is about the veil or a practice of shrouding oneself called “Zentai”, which like all things post-taboo seems to be Japanese in origin. The overall idea is that a human wears a light breathable fabric that covers their whole body, which provides anonymity and a hidden discourse with self and the role of self in society. Its kind of the best we can do since we did not develop the invisibility cloak and got stranded with the Segway and not the hover board in utopian technological terms. 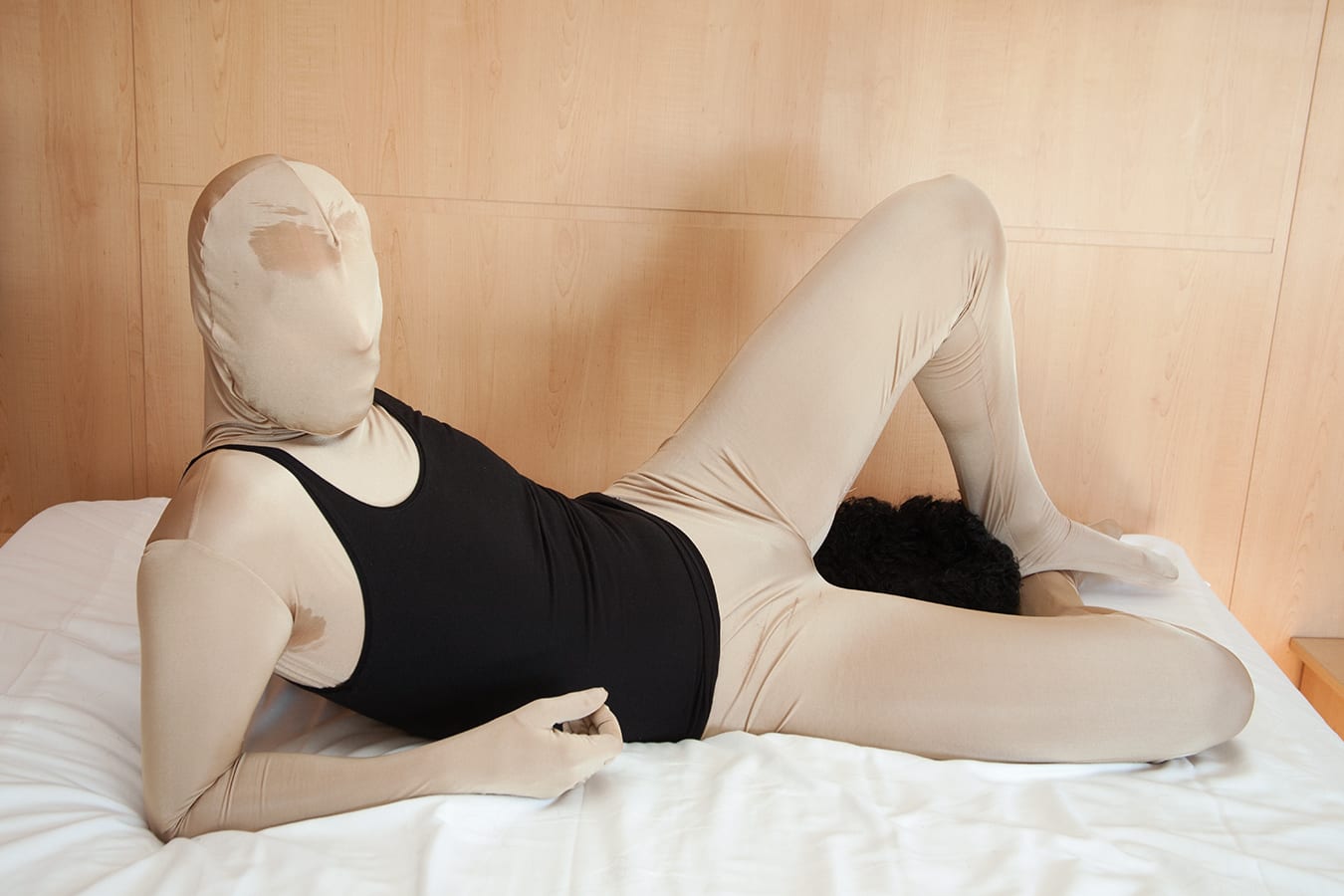 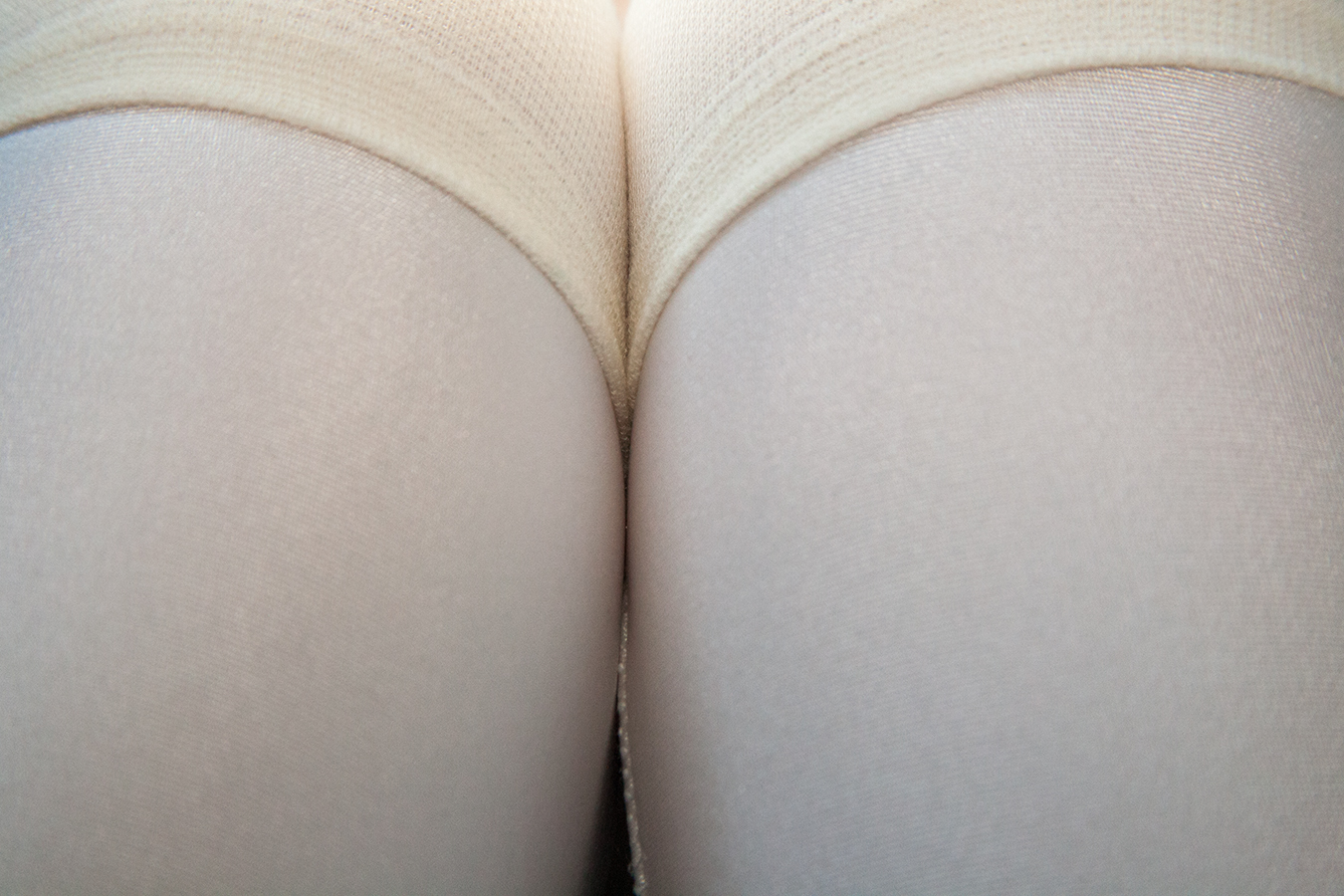 “Its kind of the best we can do since we did not develop the invisibility cloak and got stranded with the Segway and not the hover board in utopian technological terms”.

Though the function seems to also cross-reference cosplay and other forms of fairly innocent role-playing, the overall parallel to my interest is the complex potential that the zentai form of engagement is unregulated by the surveillance machinery of the state. That is why one can be fined up to 150 euros for wearing the veil or shroud if used as a covering publicly in France. That and it probably doesn’t jive well with the French trying to dismantle the burqa.

I have vented some venom at a publication last year called “2041” on Here Press in which the main provocateur covers himself in similar fashion with the idea of clothing and anonymity as a fetish that is not just sexual, but a way of living and role-playing that induces him into a state of comfortability. The only hitch here is that he is a fan of dressing up in female Muslim attire. By today’s political standards, the obfuscation of political reality of insolvent fetish comes a responsibility that is too often shrugged off for “leave him alone”, you aggressor.

In Lybeer’s work, I do not feel there is a problem at all, nor do I frown upon it as it is not indebted to indoctrinating further hate and calamity without reproach to the world precipice on the tedium of religious zealotry and geo-political posturing. Her work is performative, playful and incredibly thought through in terms of “posing the model”. There are clever breaks within the book itself and the power of a tight edit by APE prevails. All in, it is a much more clever book than 2041, which if I am honest, I think was published as shock value and not thought through by Lewis Chaplin, nor Here Press. The aforementioned publishers are talented, but it was a race to publish something exploitative and sensational with the political dialogue as an afterthought. Lybeer’s book trumps it greatly and pursues images close to the same realm without these problems. Recommended.