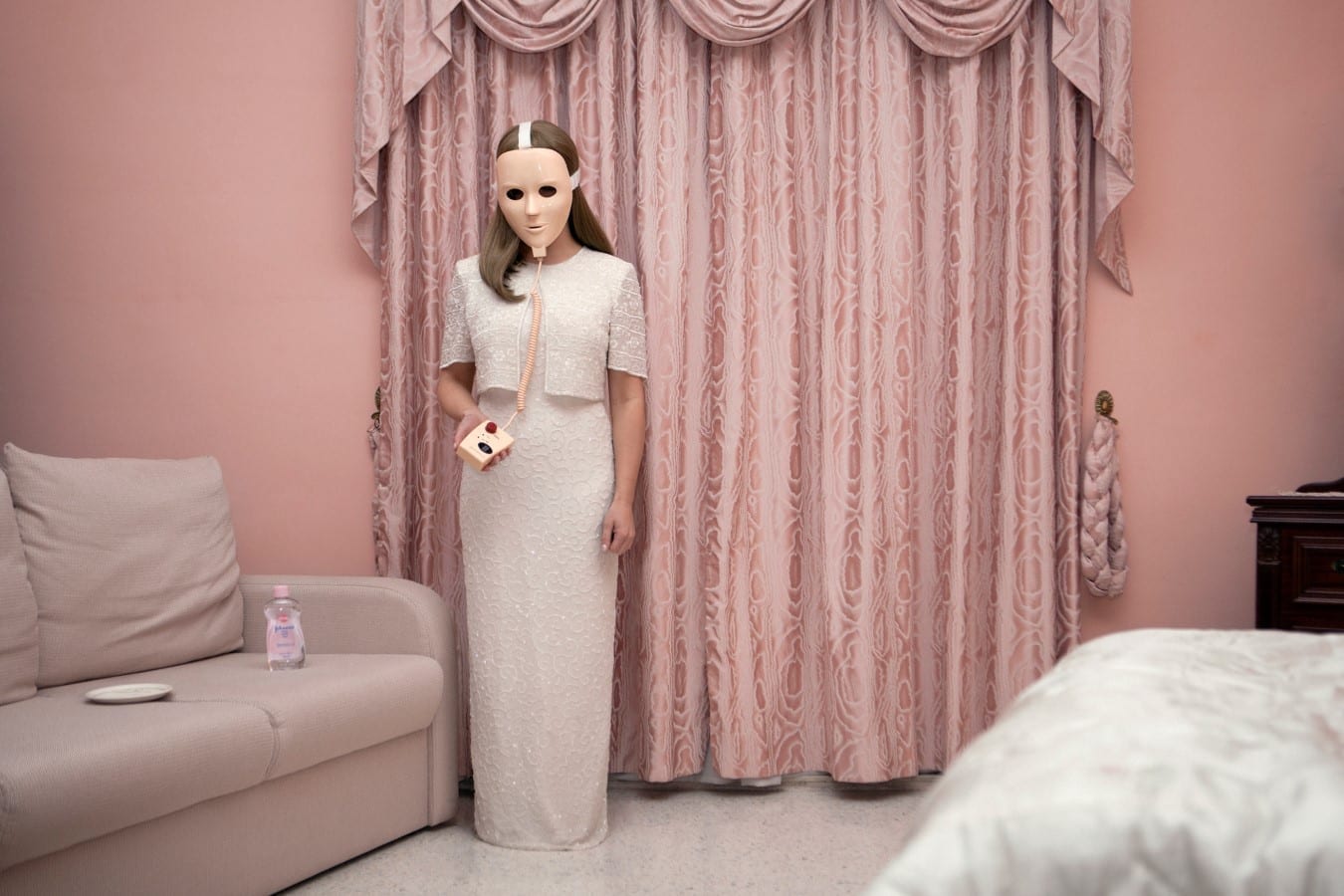 BF: Within the theatricality of your images, you seem to be hinting at a considered perception of the feminine conditioned to that of a ponderance of abjection…a horror within…or a horror from a separate vantage point. I struggle to have a discourse on the politics of contemporary feminism due largely to its current faddism and constructs of bandwagon sloganeering, not because I take issue with the importance of its measure. Would you consider your work a personal investigation of self or are you pandering to the potential of contemporary feminism? Is the self exposed personalized or politicized?

JC: I would consider it a personal investigation of the self, but my self is a feminine-feminist. So it also becomes political, but I wouldn’t say I’m pandering – certainly not self consciously and even more certainly not unknowingly. Feminism was never a topic I chose to exploit. My mum raised me with a brutal education on women’s issues, but social media didn’t really exist then. There was no so called bandwagon for me to jump on. It took me years to convince some of my close friends that women’s issues were relevant. So even with the slogans and fads, I’m glad that young women are talking about it.

I don’t feel I am exposing my physical self by appearing in my photographs. It doesn’t feel like me anymore. I cringe every time click-bait articles claim my work is “blowing away perceptions of beauty”. What does that even mean? I use my body, but it’s the emotional self I’m focused on. I like making work where you can see the subject frozen in thought, you can hear them slowly dying inside.

Horror is something I’ve always loved. That was a topic I exploited thinking it would make me cool. The art I made when I was a teenager was so kitsch – everything had to be about sex or blood. I tried reading Powers of Horror to justify what I was doing but I couldn’t understand it. It was only when I got to university that my teachers all told me that what I was doing was obvious, and I realised they were right. So I re-read Powers of Horror and shifted my focus from the external horror, to the horror within. I discovered the powers of subtlety. 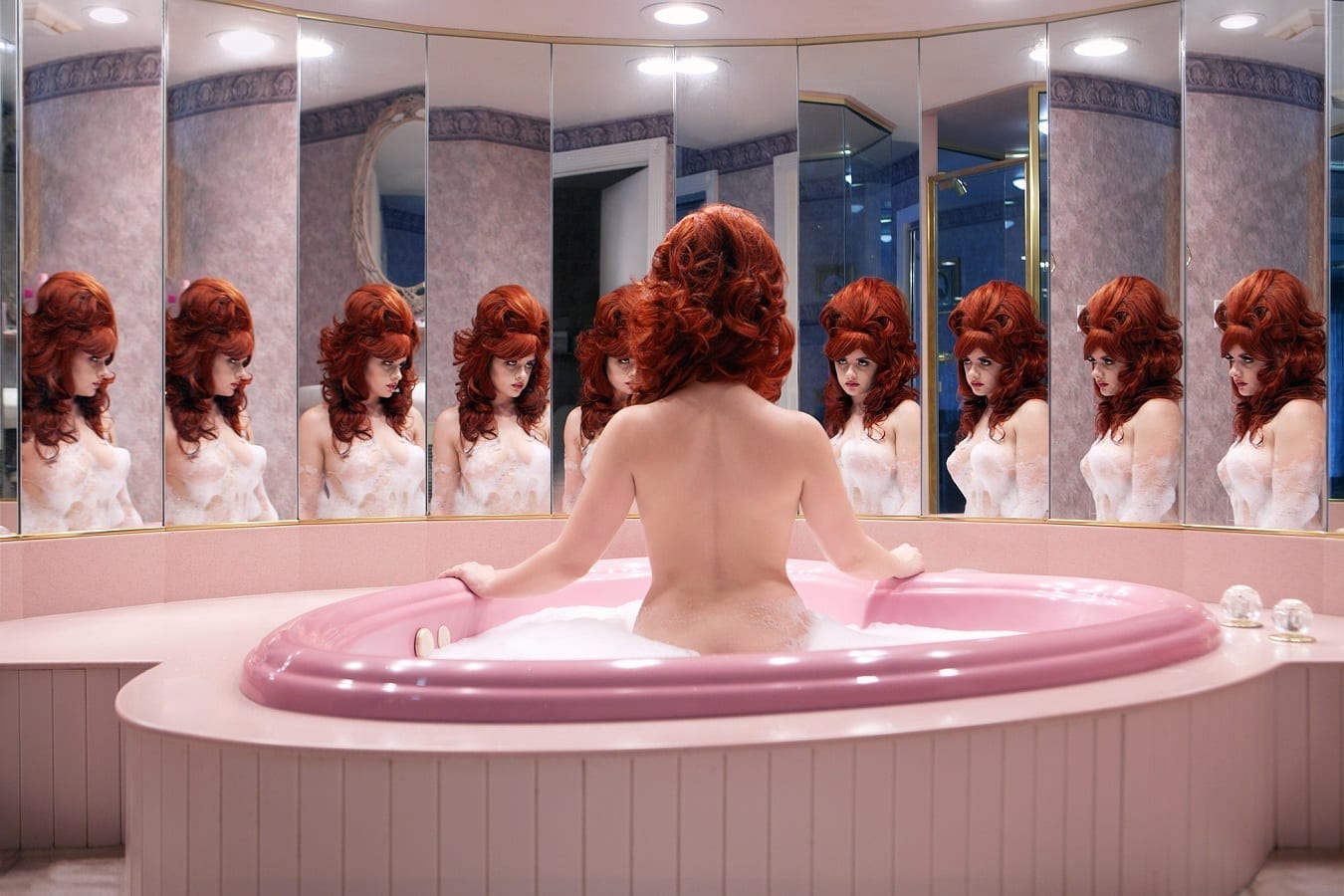 “The critique of repressive practices on the female body has not to my mind been exhausted by contemporary culture.”

BF: Why is “Joyce” a stand-in? Tell me a bit about the performance measure of your work…why do you employ yourself and not others for the project? Is it the ritual of work or the interest of diaristic importance in a fictionalized setting that gives you a control measure to center yourself within?

JC: I described her as a stand-in when that was the literal function. There was no mention of ‘Joyce’ then, it was just me trying out ideas for photographs that I wanted to do eventually try with other people. I didn’t think I was interesting enough to be the subject of my photographs. Now I work exclusively in this way because it suits me so well. I never felt comfortable taking pictures of other people. I’d get distracted and the images wouldn’t turn out the way I’d planned because I was too busy keeping them entertained. I wasn’t confident in telling other people exactly what to do. When I’m alone I can beat myself up for hours until the work is done. Most of the time I don’t know what I want to do, I have to test things out until I get there. Being alone allows me to take my time. I was always so jealous of musicians and writers being self-sufficient in their practice. I wanted to have that life. I didn’t choose to use myself because I felt it was important to document my life. That’s a bonus. I chose to work alone because I like my own company and I’m always there. I don’t have to rely on anyone else to get work done.

“A Dream In Green is definitely eroticised. Too whose advantage or disadvantage? I don’t know yet. I don’t think I am creating a disadvantage for myself, or to the women’s movement by making this work.”

BF: “The First Night”…the color blue…explain your choice of color if its worth mentioning. I can see cinematic and art historical contextualization within from Van Gogh’s “Starry Night” to transgressive Asian horror cinema, notable abstract anonymity of the hair and veil draping the female figure in an interior and familiar home environment. Do you draw inspiration for your tableau from cinema or art historical iconography?

JC: From both. Growing up I was taken to an Italian catholic church in London every Sunday but I couldn’t speak Italian, so iconography has been laser cut into my head. When I was a teenager I was obsessed with Battle Royale and the Korean psychological horror, ‘A Tale of Two Sisters’. This was around the same time I discovered Caravaggio and Goya.

I googled ‘Picasso’s blue period’ a lot recently when I didn’t know what to do next with my work. Before I went to the Honeymoon Hotel I thought I’d had my time with pink so moved onto blue. Going to the Honeymoon Suite made me realise I will never be done with the colour pink. So now I alternate between the two. When I’m working on location I’ll allocate half my time to creating preconceived images, and the rest taking pictures of whatever. ‘The First Night’ was one of those whatever images. I had a bridal veil and an LED light, and that was the result. I placed the light behind me and saturated the blue in post-production. It was actually taken on a sunny day with the curtains closed. 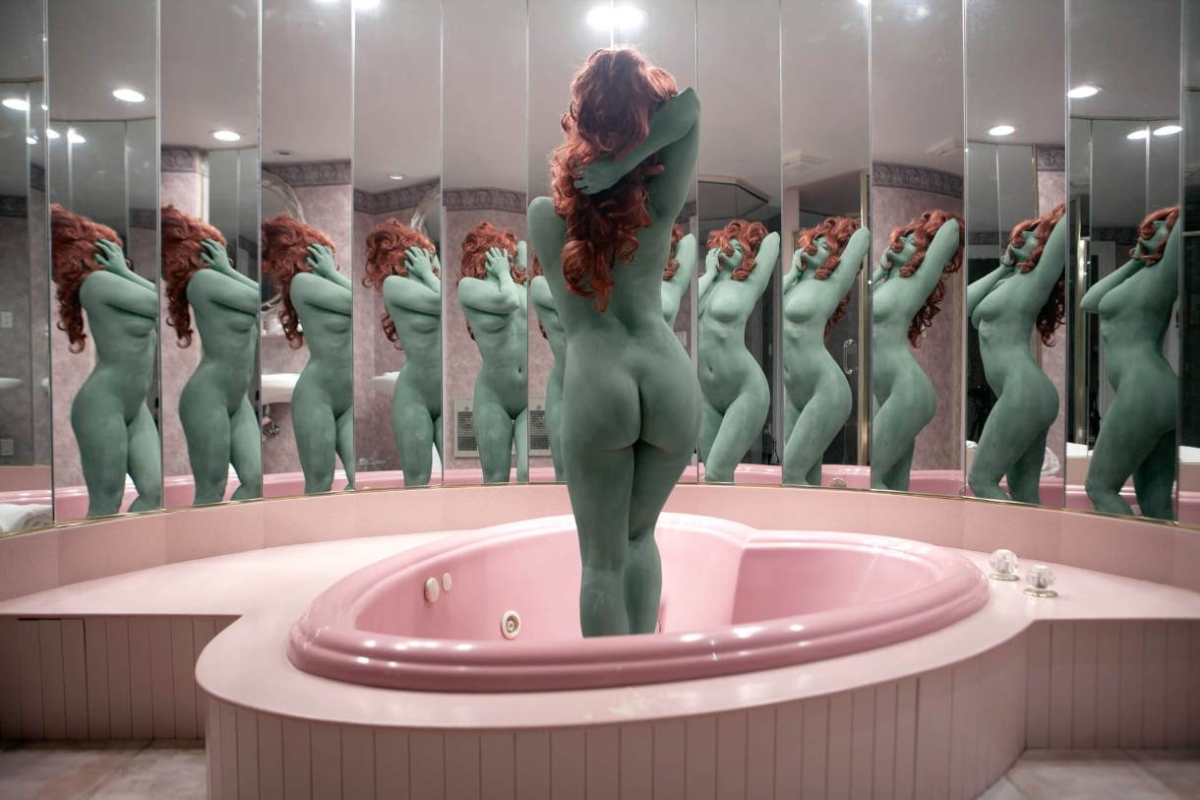 A Dream in Green @ June Calypso

BF: “wrinkle mask, baby oil, a tin of cold meat have become joyless and repressive”-Juno Calypso. Was it ever any different? When did the construct of consumerist intervention on the female body become a catalyst for your work? Was there a specific moment when these products equated to your own personal oppression?

JC: Yeah a tin of meat really pissed me off once and I had to do something about it. Nah, to be honest – that was actually one of the first things someone wrote about my work and I liked it so I took it. It’s true though, they’re all things that at one point in time were marketed as being nutritious or life-changing. When in reality they don’t work. I’m interested in moments of disappointment.

The critique of repressive practices on the female body has not to my mind been exhausted by contemporary culture. I became very interested in the consumerist intervention on the female body when I read ‘The Beauty Myth’ by Naomi Wolf. Hardly any of the products that appear in my images are souvenirs from my real life. I’ve tried making images more in touch with my own reality, but I prefer fantasy. An electronic wrinkle mask is more interesting to look at than a strip of wax. 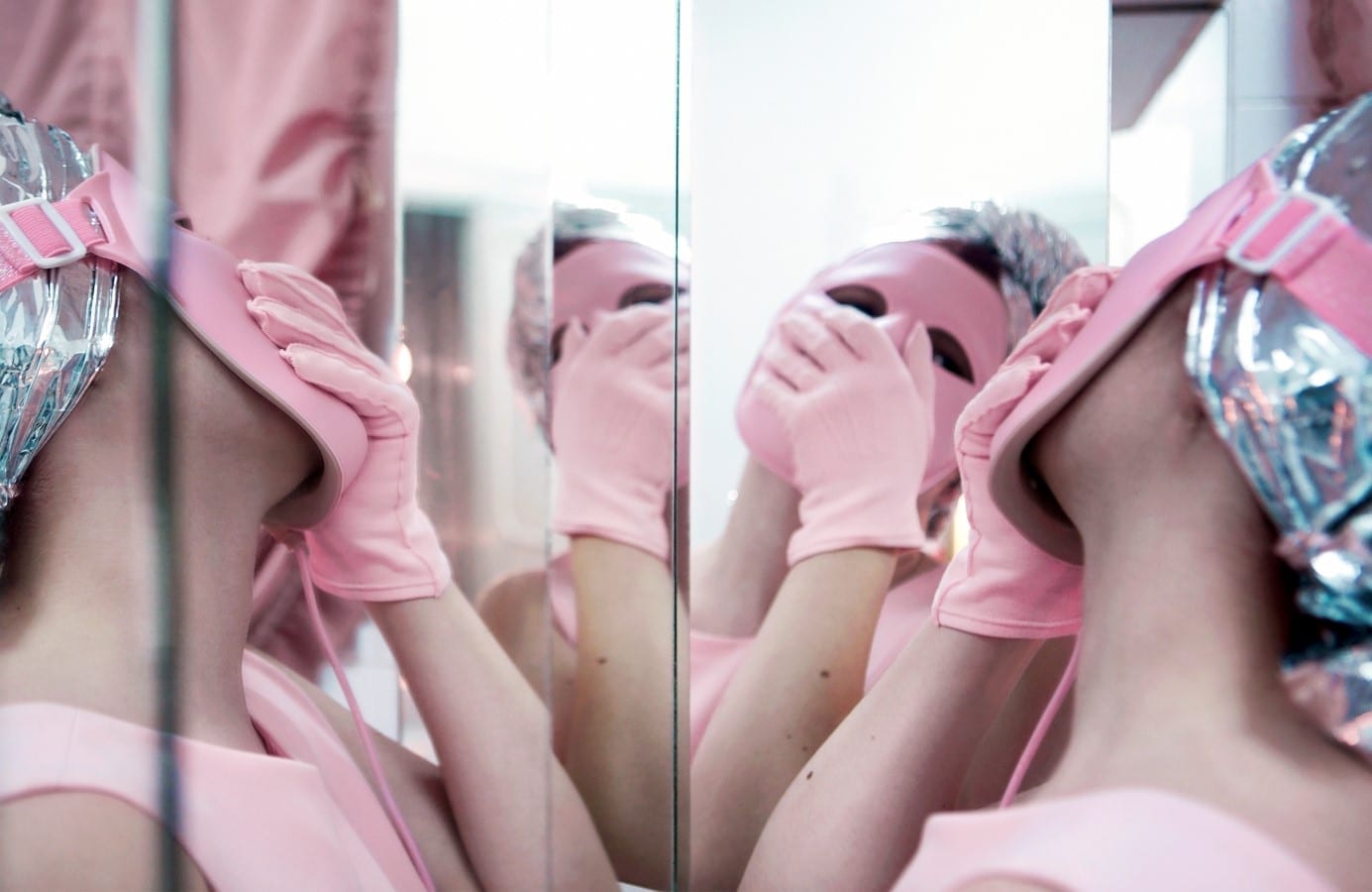 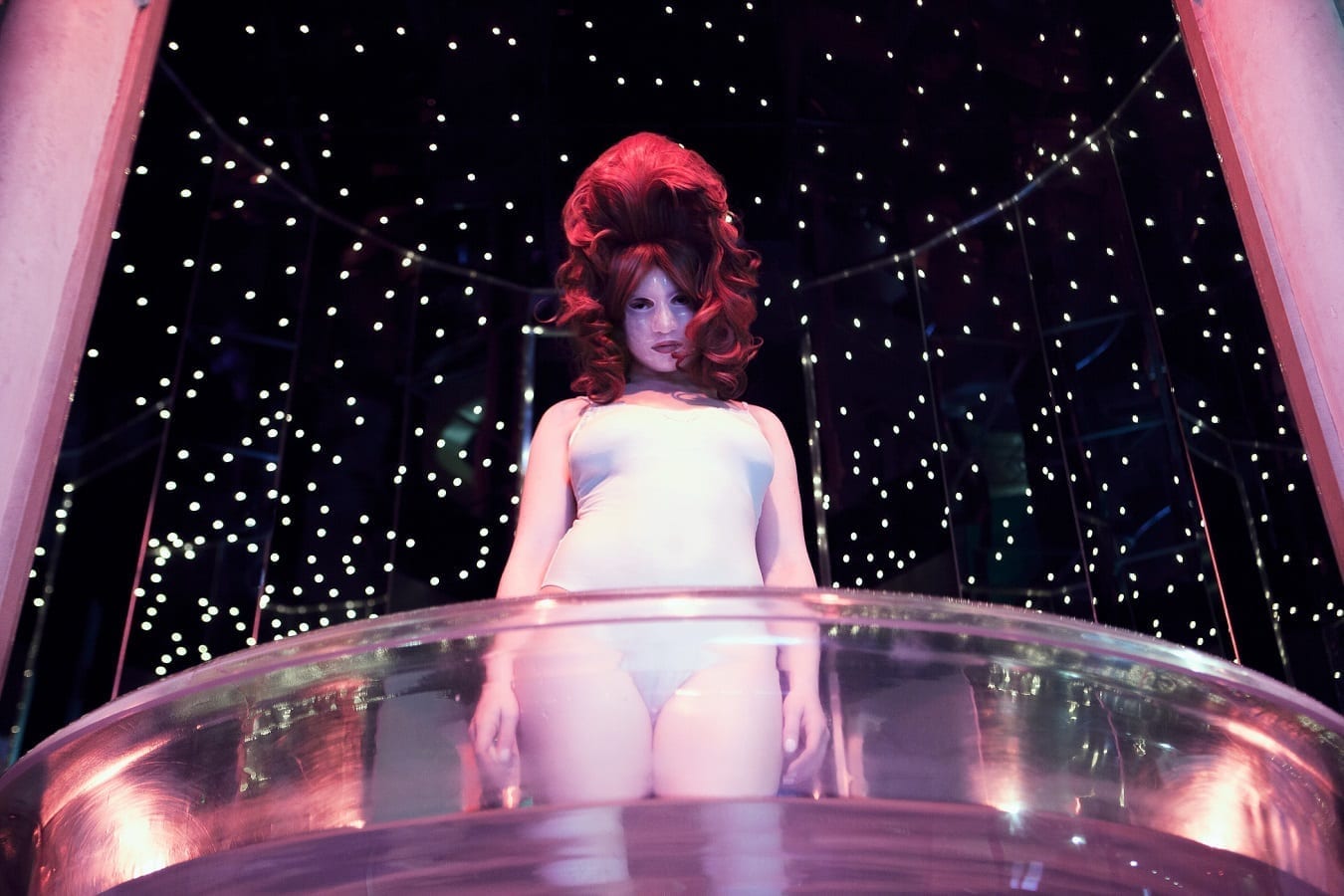 BF: “A Dream in Green”- The engendered use of color in opposition to blue-pink. The angle of the shot…the mirrors…if I were to speculate about the idealized nude…Botticelli’s Venus (you can’t help but notice the correlation)…do the matters of feminist diatribes become difficult under the totality of self-representation in an image like a dream in green? If so, how would you combat the display of desire aimed at the viewer from the camera’s position from that of the desire of self within an autodidactic methodology of display? Do you feel the image is eroticized and if so…to whose advantage or disadvantage?

JC: I feel like this question is saying ‘can you still be a feminist when your camera is aiming at your ass?” If so, my answer is yes. Does it become difficult? Surprisingly it hasn’t. I know you don’t like slogan feminists but I can’t tell you how relieved I am that someone has given ‘slut-shaming’ a name. When I was at secondary school, if I’d even draw parts of my body for an art project I’d be scolded for being ‘too revealing’. And that was in 2005. It’s such a useless way to treat women.

A Dream In Green is definitely eroticised. Too whose advantage or disadvantage? I don’t know yet. I don’t think I am creating a disadvantage for myself, or to the women’s movement by making this work. The green skin has helped communicate the context I’m working in. Not that it should be any different, but with that in place people understand my images as a type of science-fiction, and I like that. I like the way science fiction has it’s political undertones but ultimately it is a fantasy. I also get a lot of messages from Star Trek fans now.

BF: Your work points towards moving image. Is this a medium you could see yourself working in.

JC: Definitely. I always use a video camera when shooting to help me test poses and so I’ve managed to create a few video pieces out of that footage. The style is very rough at the moment. I’ve worked on film sets and what I’m doing is the most DIY bootleg version of a serious film production. Filmmaking requires team work and doesn’t leave much room for mistakes, but making mistakes when I’m alone is the foundation of my practice, so I think I’ll stick with it a bit longer.