“This is the real truth of the matter-that not only does the photograph lie, it grows and ferments within our psyche as a stand-in for our unintended degradation of the human experience. Like all monuments, they should be castigated to ruin by the weathered leper hand of Cronos.”

There is something slack and temporary when it comes to the scrutiny of photographic meaning in the perceived necessity to understand its’ implication, which intrudes upon one’s consciousness in its quest for denotation, value and legitimacy. All of these needs from a photograph amount to an enveloping nothingness; a renunciation of the forebearance of what is perceived within. This is to contemplate the existence of a void… a non-existence, a non-perception and a grave non-context of its “embodiment”. Within photography, there is a consummate parody of human desire to make an insight into vague notions of representation and to place oneself within the paradigm of the image portrayed.

“Shipment of warm greetings from Auschwitz with the rustle of the summer wind, from your sister Cześka.”

“Everything is fine, all I miss is you and the sun.”

Images that travel; images for hire. The postmarking of images. The weathering and creasing deformation, which detracts the value of a post-card is insipid as to its perceived “correct” representation or is it? Images sent from the furnace of the Auschwitz gift shop are sent back home as if to say “Hey, here we are in the solemn tomb of genocidal monuments wishing you were here with us to sift through the ashes and teeth and shoes and maybe we can share this façade of a historical experience with you”. What is it that a post-card from Auschwitz wishes to share from its travel from Poland towards Germany? What meaning or value does it purport to give the receiving party? How does one assume the collateral damage of the Final Solution in terms of a warm greeting from abroad? The manufacturing of said post-cards cannot muster even that which you may call a sentiment. It is somebody else’s memento corralled off the dead, blistered and bony backs of those who suffered. Can this object relate to the addressee anything at all? Likewise, can an Ibiza sunset with a nude girl printed hazily in half-tone be experienced as a romantic interlude or simply a stand-in for somebody else’s good times or perhaps the façade of the party fuck paradise it tries to speak for? 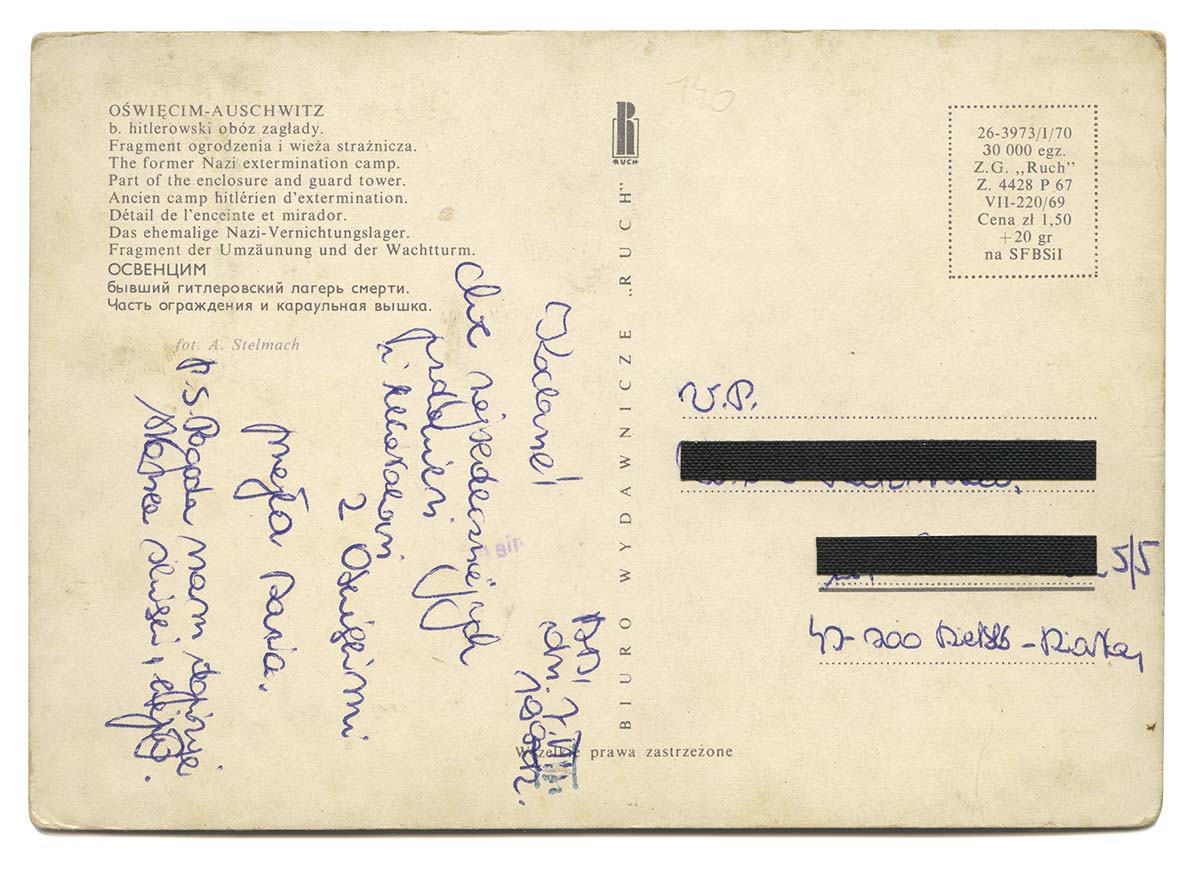 “If one recalls the notion of relics within the Judeo-Christian tradition-one may also be enlightened to know that the bone of saints preserved in their reliquaries were often fragments of smashed pig bone, This not only serves a condemning view on the ineptitude of spirituality itself, but also makes a grand metaphor for the pig bone of representation within photography”.

In my inability to speak any foreign languages adeptly, I have found that this book represents what I have come to understand about meaning and representation within photography or rather, It has cemented it further. The scribblings on the back of these post-cards that Pawel Syzpulski has collected and edited mean nothing to me. My inability to read them is a purposeful gesture to allow my gaze to remain sedate by its inability to understand the image itself. That is to say that I inherently do not believe in relativism or absolute representations of meaning within the entire canon of photography and even less when it is enabled by words or captions. Photography, by its paradigm of hunter/killer capacity “captures” (strongly disagree with that notion as well) a moment-and what exactly is a moment? Is a moment a second? Is it 1/1000 of a second that a camera enables? Which infinitesimal slices of “time” does photography miss between light hitting what is in front of it and the plane of recording?

I prefer to think that no matter what my interests in notions of time and its irrelevancy are-relativism again, that it would be of the greatest magnitude of treachery for me to imply that I have some conscious understanding of what any image of Auschwitz could mean. It is simply put an unfortunate challenge to the seething inability to grasp the finite. The camera as a tool has haunted the human imagination as a conduit for experience and representation. This, like the ovens of Auschwitz and the pitiful monuments of the world should be destroyed as soon as possible. We cannot excuse our limitations of collective memory, human experience or the chastity of suffering that others have experienced for that of our own. Nor can we abscond with the joys lived, nor the multitude of human emotions, expressions and experiences that guide short individual lives throughout their small existences. This is the real truth of the matter-that not only does a photograph lie, it grows and ferments within our psyche as a stand-in for our unintended degradation of the human experience. Like all monuments, they should be castigated to ruin by the weathered leper hand of Cronos.

On a whole, I expected to dislike this book based on my above feelings. Adversely, I see it as first class and as an enabling wake-up call from the trauma of historical event to that of photographic relic. If one recalls the notion of relics within the Judeo-Christian tradition, one may also be enlightened to know that the bone of saints preserved in their reliquaries were often fragments of smashed pig bone. This not only serves a condemning view on the ineptitude of spirituality itself, but also makes a grand metaphor for the pig bone of representation within photography. As with tall monuments to the errors of human pride and ability, photographs should be given their place next to the children’s coloring book of wisdom. The book is highly recommended, but for the sake of its tertiary and spurious experiences of the trauma of the “real” contained over the railways and under the big blue sky of Auschwitz.