“But if photography is your subject, you can’t simply follow the canon or the money: you have to be prepared to look in the ‘low’ places in our visual culture as well as the ‘high’. You have to be a rag picker as much as a connoisseur”.

David Campany is an Author, Artist, Writer, Lecturer, Curator, Collector, etc. etc. He lives and breathes photography. By metaphor alone this is possibly a cogent transition for discussing “A Handful of Dust”, his current book with Le Bal/Mack and an exhibition at Le Bal, Paris which explores the motif of detritus, dust, photography and modernity. He has centered his inquiry on Man Ray/ Marcel Duchamp’s photographic image “Dust Breeding”. This photograph was taken of Duchamp’s glass Sculpture “The Bride Stripped Bare by Her Bachelors, Even” by Man Ray though seemingly titled by Duchamp. The issues of authorship, materiality, and the nature of the avant-garde are intrinsically tied to the photograph. I caught up with David to ask a few questions about the exhibition and works within.

BF: On the note of authorship…and language… Man Ray’s photograph of Duchamp’s “The Bride Stripped Bare by Her Bachelors, Even” was titled later as “Dust Breeding” by Duchamp and not Man Ray himself. This creates the double fold dilemma of whose work is what and whose work lies in which medium. Even though Man Ray had disavowed making images of other artist’s work, he clearly felt an attachment to the photograph enough to take it and only one other with him to Paris. In your summation… where does authorship of the photograph lie or is it a pure collaboration?

DC: The authorship of photography always lies! It’s so messy! I’ve come to see the role of the photographer as being a facilitator of collaborations between the camera and the illuminated world before it. All photographic authorship is really facilitation. Moreover photography became modern for art precisely at the point where it began to accept this, or at least intuit it. That is to say, photography became a modern art just as modern art itself was beginning to wonder what it was, what it had become, what it was for and how it related to the worlds of non-art and non-authorship. That’s why, with so much of the great photography of the modern era it’s difficult to say exactly where the artistry resides. It’s great partly because we don’t quite know. Atget, Wegee, Krull, Strand, Evans, Cartier-Bresson, Levitt, Frank, Brandt, Arbus. Most of Man Ray’s photography was too self-consciously arty for my liking, too modish. But the photograph of dust is fascinating. When you see it in Man Ray books and shows it’s regarded as the work of visionary artist. But in books on Duchamp’s work it’s a mere document, a functional and descriptive production still showing a stage in the making of The Bride Stripped Bare. Eventually in 1964 they both signed it. That of course didn’t resolve anything: it simply compounded the conundrum and dramatized the essential tension in all photography between its document character and its artistry. 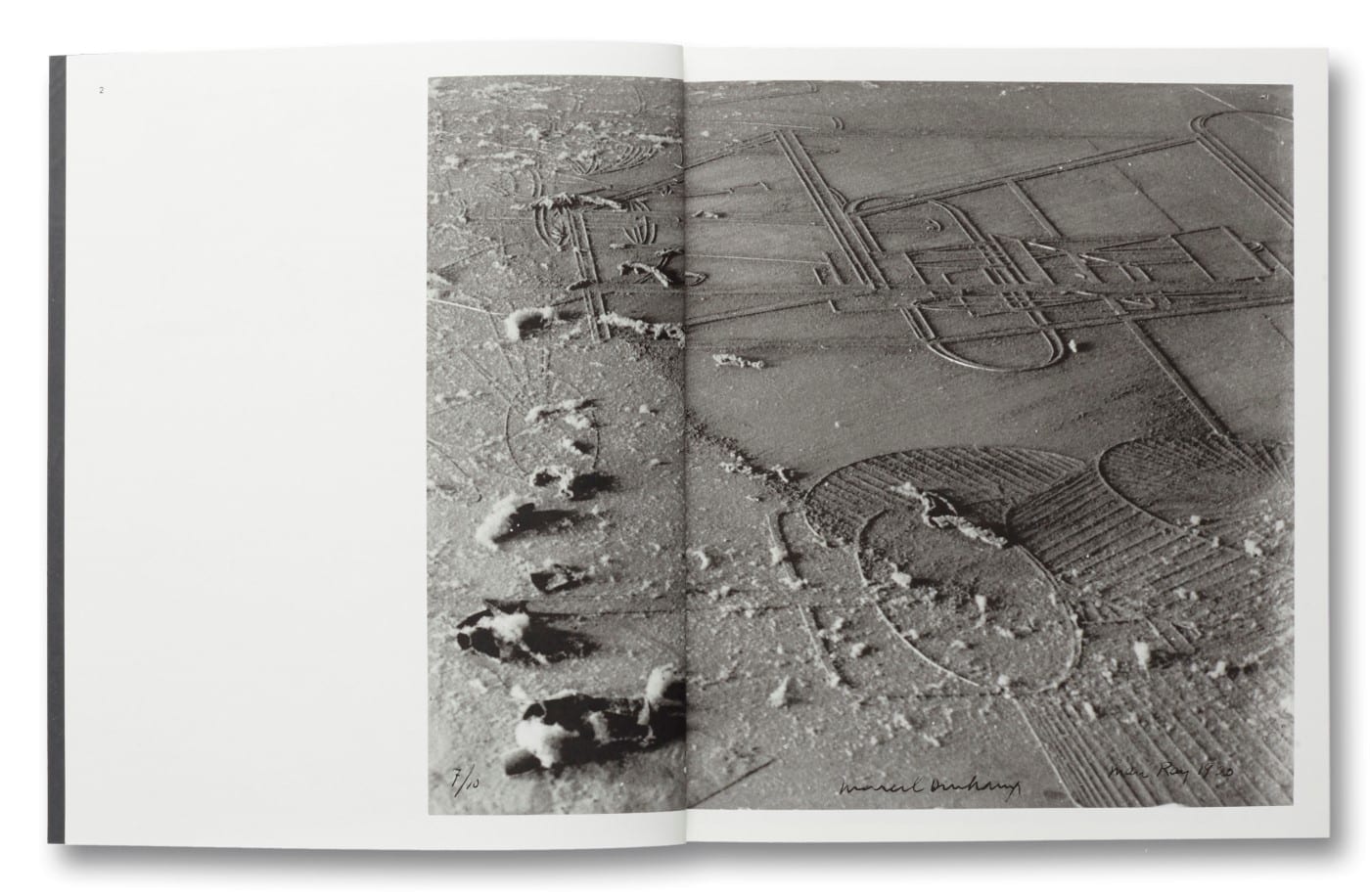 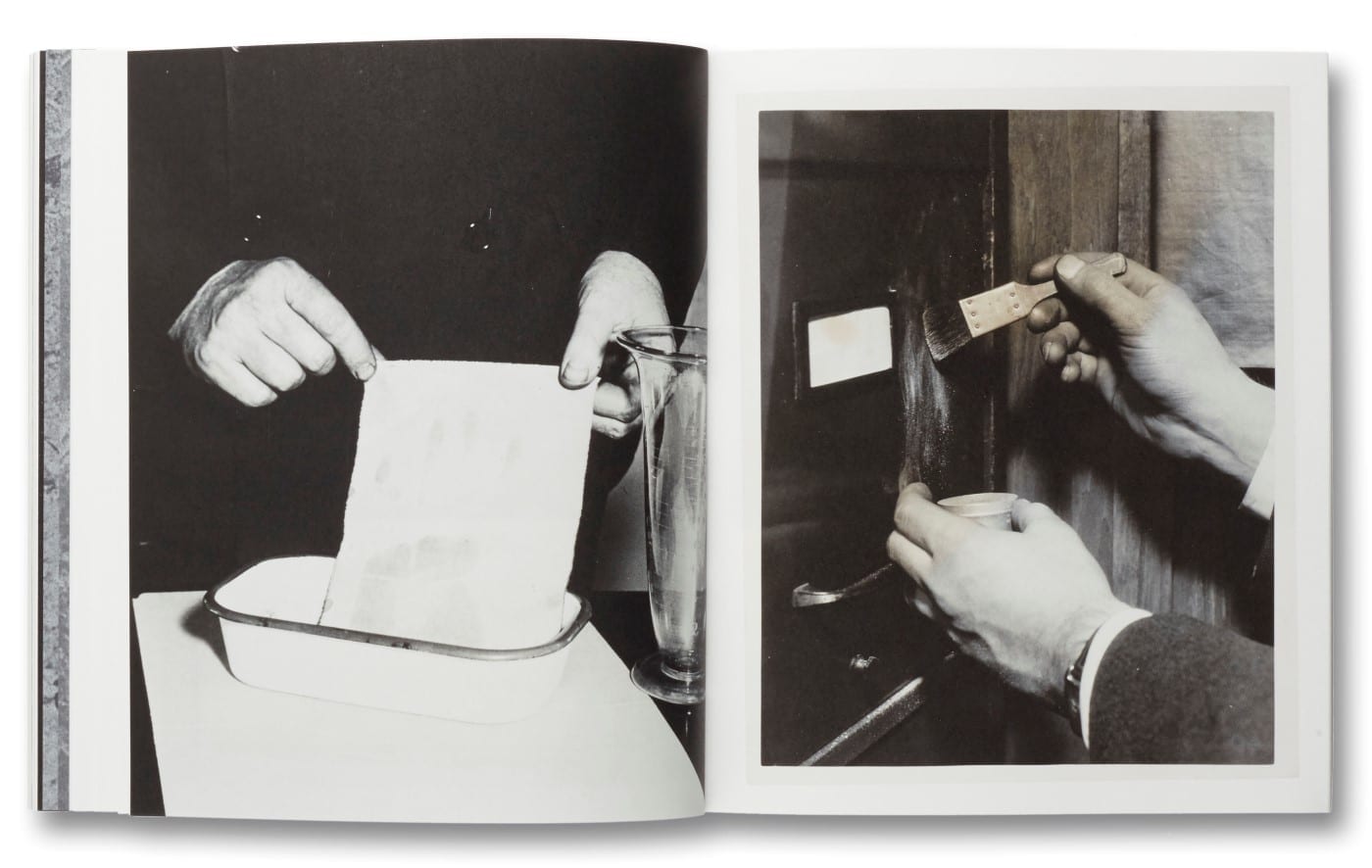 BF: Continuing with the language game… “The Bride Stripped Bare by her Bachelors, Even” and “Dust Breeding” offer a potential for the sexual consideration of titles… As with many of Duchamp’s works and his Rrose Sélavy alter-ego and muse, and also that of surrealism in general (perhaps not dada), there is a continual and often white male discourse to these particulars of titles that imply un/conscious notions of a sexualized psyche. The titles Duchamp chose often had a transgressive sexual nature to their status. Could you speculate as to the origins of these titles within the mind of the author or society at large?

DC: In general I’d agree with that. However, the sexuality of Duchamp’s art is much more complex. I’ve always found his artistic production kind of ambi-sexual, kind of asexual, kind of anti-sexual. He never really made ‘objects of desire’. Rather, he seemed to want to objectify desire itself. An impossible task. Hence the instabilities in his work. More specifically, dust has no discernible gender but in a patriarchal world, men make a mess and women clean it up. In that regard it’s interesting that part of the caption for the dust photograph when it was first published was ‘Voici le domaine de Rrose Sélavy / Here is the domain of Rose Sélavy’. The filthy world of a woman who refuses the patriarchal obligation to ‘do the dusting’. Make of that what you will.

BF: …Could the title “dust breeding” reveal a metaphor for anxiety and humanity the post-WWI European mindset? The sense that dust (dust to dust) in the Christian sense, could relay the atrocities of mass graves and mustard gas towards the enduring futility of human bodies and ideologies? Or is it simply a comical enterprise in titling?

DC: For audiences in 1922, when the dust photograph was first published, I’m sure it was reminiscent of the battlefields and trenches of the First World War (especially when another component of its caption was ‘Vue prise en aeroplane / View from an airplane’.

In its modernity, the twentieth century seemed intolerant of dust. It wanted the hygiene of a clean start. But that meant a certain denial of the past, and out of that denial came extraordinary violence and destruction, and an excessive production of new dust. All societies that fail to live in the past a little, the present a lot and the future a little become psychotic, sooner or later.

BF: There is a certain sense of anxiety about the human condition that photography can often reveal when its attention is pursued in the concept of the fleeting… or the ephemeral. I often look at the ghosts in Nineteenth Century photography that were recorded in spectre-like passings of the figure due to shutter speed. People become traces of themselves; blurs. Robert Sobieszek considered this in his book “Ghost in the Machine”.

The essay you have written largely deals with the conceptual framework of the avant-garde, but leaves space for the greater rumination of mortality through citations of all the key players from Blanchot, Baudelaire and Bataille…yet the fever, the anxiety, are somewhat left in favor of the culture of copy (Schwartz), violence (which perhaps argues for death by threat thereof), and the conceptualization of dust as material economy.

Though death is ever-present and is more apparent in certain images like that of the Pompeii plaster casts by Giorgio Sommer and perhaps Tereza Zelenkova’s Photograph of Bataille’s Grave… mortality does not seem to be the main focus, but rather, perhaps… the mirage or metaphor for life is…Can you explain why death seems to be silent or less outright/obvious within the book and exhibition considering the cultural conditioning of dust as metaphor for death?

DC: I think the discussion of photography’s relation to mortality has been done to death, so to speak. I never found it to be either the most interesting or artistically rewarding aspect of the medium. It’s a dead-end. Nevertheless I accept that it’s an important part of how many people relate to photography, and so I’m happy to leave room for my readers/viewers to take their readings in that direction. I’d rather let the idea of death do its haunting than try to address it directly. (As you might imagine, I don’t really go in for the tiresome schlock of ghost photography. Why is it necessary if all photography is ghostly and spectral anyway? It’s overkill Literally). 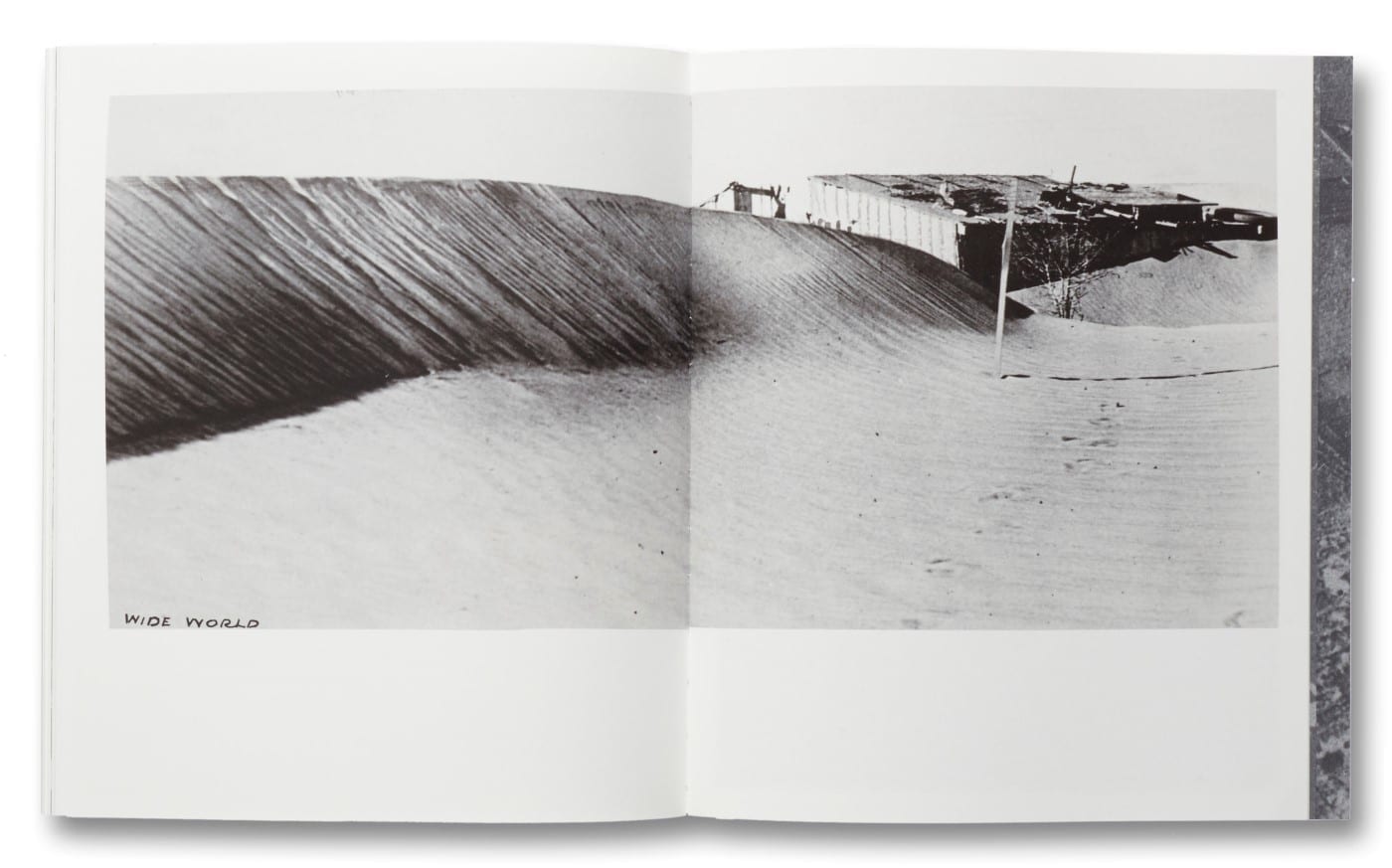 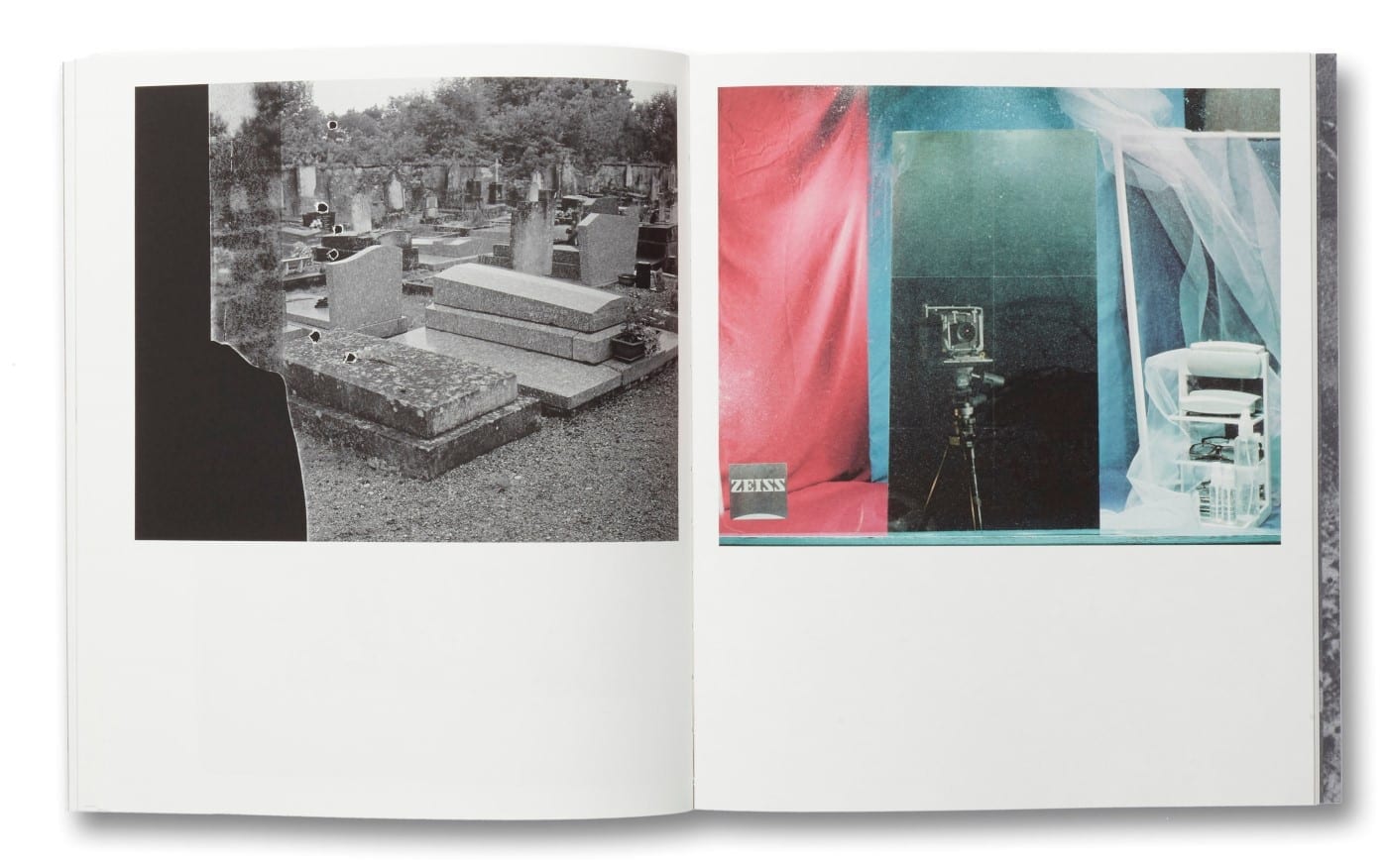 “In its modernity, the twentieth century seemed intolerant of dust. It wanted the hygiene of a clean start”.

BF: One could surmise that TRACE as a concept within this book is examined over that of the concept of PASSING, which in and of itself speaks of materiality or the impression of a material economy over that of potential of event.

When I say TRACE, I make the difference between what “leaves a mark” and what is perhaps an atmospheric or more alienable attitude to the concept of PASSING in which a mark is not left, but the event possibly exists in language or having been observed. Trace seems to avoid being witnessed first hand, but leaves a perception of materiality or remnants for viewing…What are your thoughts on the direct materiality of some of these images such as Orozco’s “Breath on Piano”…

DC: If photographs are themselves traces, what happens they take traces as their subject matter? Do we get traces of traces? If still photographs are always images of a world through which time was passing, what happens when passing becomes their subject matter? Do we get passings of passings? I guess these questions interest me more than the melodrama of death. I don’t think we’ve even begun to come to terms with the stillness of photography. Perhaps we never can. Stillness is inhuman, alien. The frozen or suspended time of photography is a profound challenge. Have you noticed how the photographs of Parisian streets taken by Atget are so often described as ‘empty’? Empty of what? All photographs are full. They can’t be otherwise. Atget’s photographs are full of ‘street’. But somehow commentators feel compelled to assert the absence of people. The street then becomes a forensic site of searching for traces and intimations of passing. That is to say, the projection of narrative. It’s as if we can’t really look at a world suspended. It’s too strange. Too other. Dust Breeding intrigued me in this respect. Dust is an effect of some prior action – attrition, breaking, shedding. But the photograph is titled in the ‘present continuous’. Breeding, not bred. Moreover, in his entertaining memoir, Man Ray described how he set up the camera, opened the shutter and went out for a bite with Duchamp. They came back and closed the shutter. So it’s a long exposure and dust was indeed breeding. Not that you can tell from looking at the photograph.

“I don’t think we’ve even begun to come to terms with the stillness of photography. Perhaps we never can. Stillness is inhuman, alien. The frozen or suspended time of photography is a profound challenge”.

BF: The Herculean task of indexing the un-indexible… what were some of the difficulties of putting this material together conceptually?

DC: I first saw Dust Breeding twenty-five years ago, in the Royal Academy’s first exhibition of photography. I didn’t like it at all. But dislike is a strong reaction (most photos leave us merely indifferent). Even back then, I was Freudian enough to know I should attend to my strong rejections. I came to be fascinated by that image. I began to notice that others had also found it fascinating – figures as diverse as John Cage, Bruce Nauman, Rosalind Krauss and Sophie Ristelhueber. At the same time however, I began to sense that the ‘canon’ of art and the hierarchy of culture that puts museums at the top and thing like press photos, magazines and postcards way down below had amounted to a betrayal of what was so significant about photography. Interesting work can be made anywhere, or made interesting anywhere. So I’ve ended up with a project that’s close to my own understanding not just of dust, but of photography. It mixes works by ‘masters’ such as Walker Evans, Laure Albin-Guillot, Wols and Edward Ruscha with works by forgotten or unknown photographers and objects from popular culture. When the show opened in Paris a very learned French art historian asked me which archive contained all those popular postcards of 1930s American dust storms. When I told her they were from eBay she looked genuinely shocked. But if photography is your subject, you can’t simply follow the canon or the money: you have to be prepared to look in the ‘low’ places in our visual culture as well as the ‘high’. You have to be a rag picker as much as a connoisseur.

A Handful of Dust

EXPLORE ALL DAVID CAMPANY ON ASX