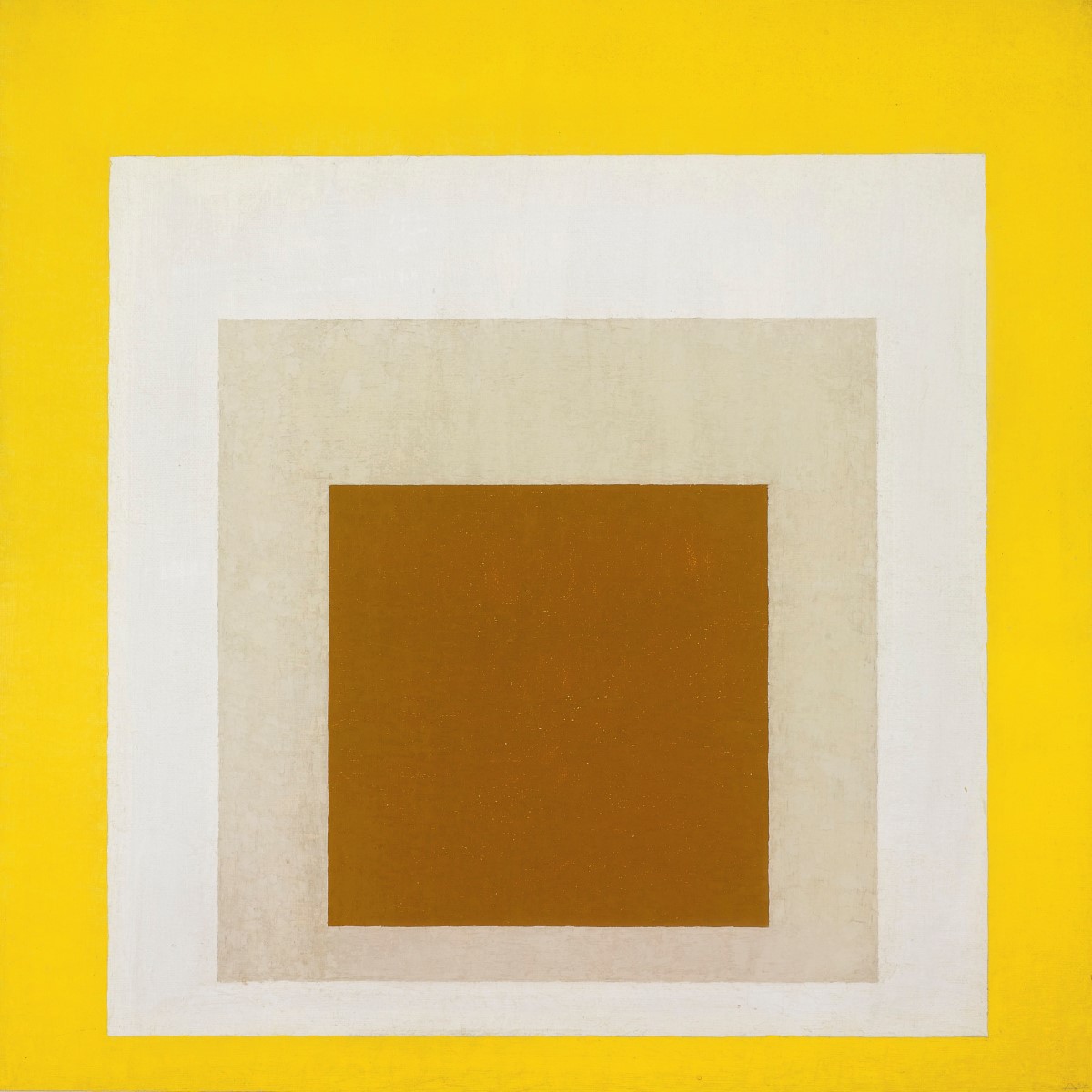 @ the Estate of Josef Albers

“I still like to believe that the square is a human invention. And that tickles me. So when I have a preference for it then I can only say excuse me.” – Josef Albers

EVIM FESCI: Yes. But how did you come to the development of the squares? I think you started in 1949.

JOSEF ALBERS: That’s like how one gets to know a human being. It so happens that I’ve always had a preference – as everyone has prejudices and preferences – for the square as a shape in preference to the circle as a shape. And I have known for a long time that a circle always fools me by not telling me whether it’s standing still or not. And if a circle circulates you don’t see it. The outer curve looks the same whether it moves or does not move. So the square is much more honest and tells me that it is sitting on one line of the four, usually a horizontal one, as a basis. And I have also come to the conclusion that the square is a human invention, which makes it sympathetic to me. Because you don’t see it in nature. As we do not see squares in nature, I thought that it is man-made. But I have corrected myself. Because squares exist in salt crystals, our daily salt. We know this because we can see it in the microscope. On the other hand, we believe we see circles in nature. But rarely precise ones. Mature, it seems, is not a mathematician. Probably there are no straight lines either. Particularly not since Einstein says in his theory of relativity that there is no straight line, who knows whether there are or not, I don’t. I still like to believe that the square is a human invention. And that tickles me. So when I have a preference for it then I can only say excuse me.

“And that youth today is tired of so-called self-expression. They want finally now again to know why one does this and not this, and just not only get drunk.”

JOSEF ALBERS: Well, I would say the aim of art is a constant, and a continuous job to reveal visually the attitude of our mentality. And the less we disturb the influence of our mentality the more I believe we come close to the truth. And therefore the last 15-20 years in which everyone tried to be different from everyone else with the result that in their work, they all look alike, there is an artificial and not true relationship because honesty and modesty are forgotten. The more eccentric one behaved the more he was considered a personality. On the other hand, the, more you obey your constitutional inclinations, your constitutional preferences and prejudices, the more you are yourself. You have not to force so-called individuality. You have to avoid everything that makes you a Wagnerian blowing up your gestures, blowing up your verbal formulations. Therefore I recommend simplicity because it is honest against all over-dramatization. 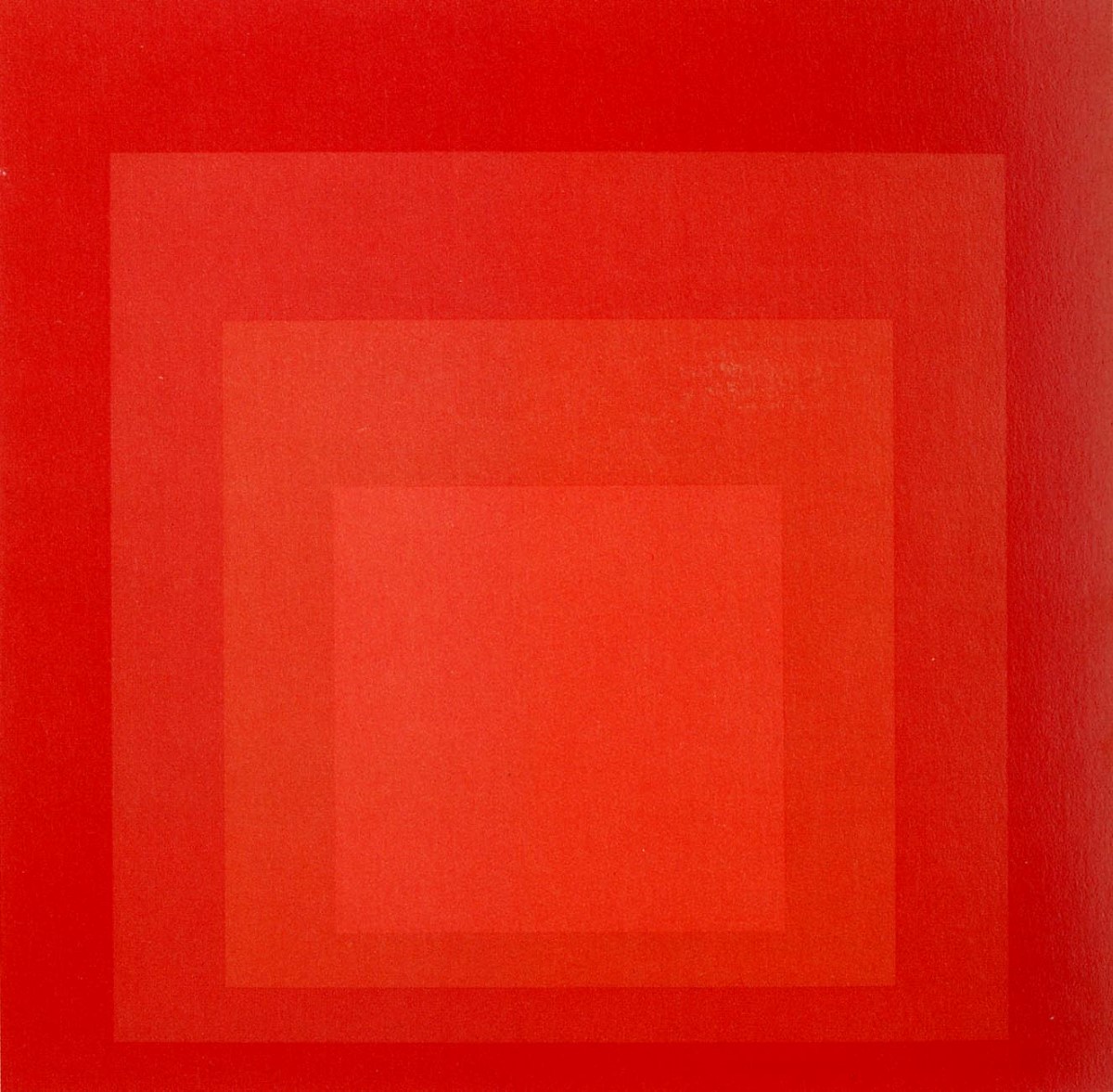 @ the Estate of Josef Albers

“Well, I do not like to be a prophet. I like better to paint than to predict what the next painters will do. Though I have a feeling that consideration of order is very much in the air.”

SEVIM FESCI: That’s right. Mr. Albers, you have often been referred to as the father of optical art. I know you don’t like this title, but I would like to know how you feel about this?

JOSEF ALBERS: I think it’s true, as many say, I have dealt for many years with the problems that Op art, so-called, is dealing with. For many years I have studied the logic and magic of color. And so I know what’s involved when it comes to the interaction of colors, more than many who refuse to study it. But I found a way to study it, I think, that’s all. And besides I refuse to be the father of a new bandwagon

SEVIM FESCI: I would like to know what you think of the general direction that painting is taking now in the second half of this century.

JOSEF ALBERS: Well, I do not like to be a prophet. I like better to paint than to predict what the next painters will do. Though I have a feeling that consideration of order is very much in the air.

JOSEF ALBERS: And that youth today is tired of so-called self-expression. They want finally now again to know why one does this and not this, and just not only get drunk.The following is my statement on articulation: (Reprinted from “The Yale Literary Magazine,” copyright Yale Literary Society, New Haven, Connecticut. 1960,) ON ARTICULATION See and say “ex,” and write and spell it. And hear and listen, and feel how it feels, this word, or prefix, or name of a letter. Also spell and write, and say and see “press”. Say it also without voice, and feel the mouth performing it. Then we will recognize each of the two words showing an outspoken, firm face. And we can not overhear, overlook their double strength and double impact in their combination, the verb “to express”. We feel that it means something forceful –of an act of will, and with purpose and aim, something meant, and of necessity and character. All of which signifies its generators, communication and articulation, which still remain active for instance in the saying “this is an expression”. But where do those features remain in the liaison of “expression” and “self,” in today’s too frequent art term “self-expression”? Let us remain aware of how often it happens, the formulation of an “expression”. And see how many, today, practice self-expression –all the time–and have nothing to say–

EXPLORE ALL JOSEF ALBERS ON ASX