“If these pictures have a palette, it is a logic of Caucasian biology and codified dress”.

Arthur Mole’s “living portraits”, easily mistaken for small-town pansy decorations, are composed with bodies: ‘The Human Liberty Bell’ is concocted with the bodies of 15,000 soldiers; ‘A Living Portrait of Woodrow Wilson’, with his signature hairline and small spectacles, constructed from a crowd of 25,000 men. If these pictures have a palette, it is a logic of Caucasian biology and codified dress. The mutations of hat (on/off), hair (dark/light), shirt (white/black), skin (white). I search for a black face among the organised crowds; occasionally, I think I find one – but it’s only a hat’s shadow.

In this re-presentation of Arthur Mole’s “mass ornaments” (1913–1918), a set of endpages – deployed as a prologue and epilogue of sorts, each of 8 spreads – offer the reader close-ups of the photographs, revealing bodies and the grain – pushing these images to the limits of their representational ability. Scaled up, the photographs begin to fall apart; the units (human individuals) cannot become protagonists, because they start to blur, a graininess akin to pixilation. Units give way to more units in a vertigo of scales: the fractal world of the image. Faces look smeared – you might make out the blot of a necktie, or a pair of hooded eyes giving only the suggestion of an expression. Sometimes these solders are saluting, and their raised arms create diagonal lines of herringbone tweed. But how long have these men been standing for, I wonder? (In the making of “Human Statue of Liberty, 1918”, a local newspaper reported that a number of men, dressed in their regulation wool uniforms and standing stock-still for hours, fainted as the temperature crept up to 105 degrees.) 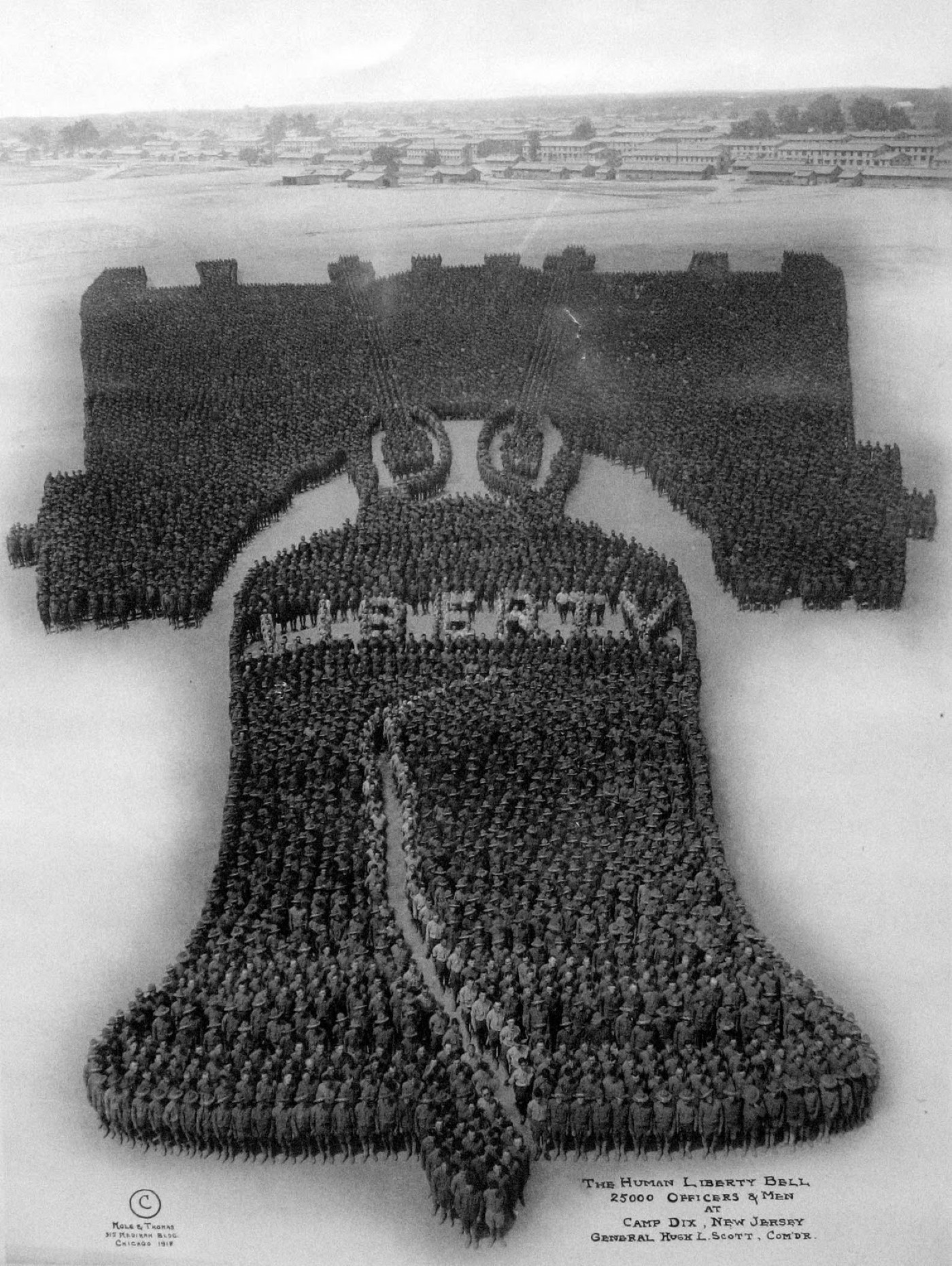 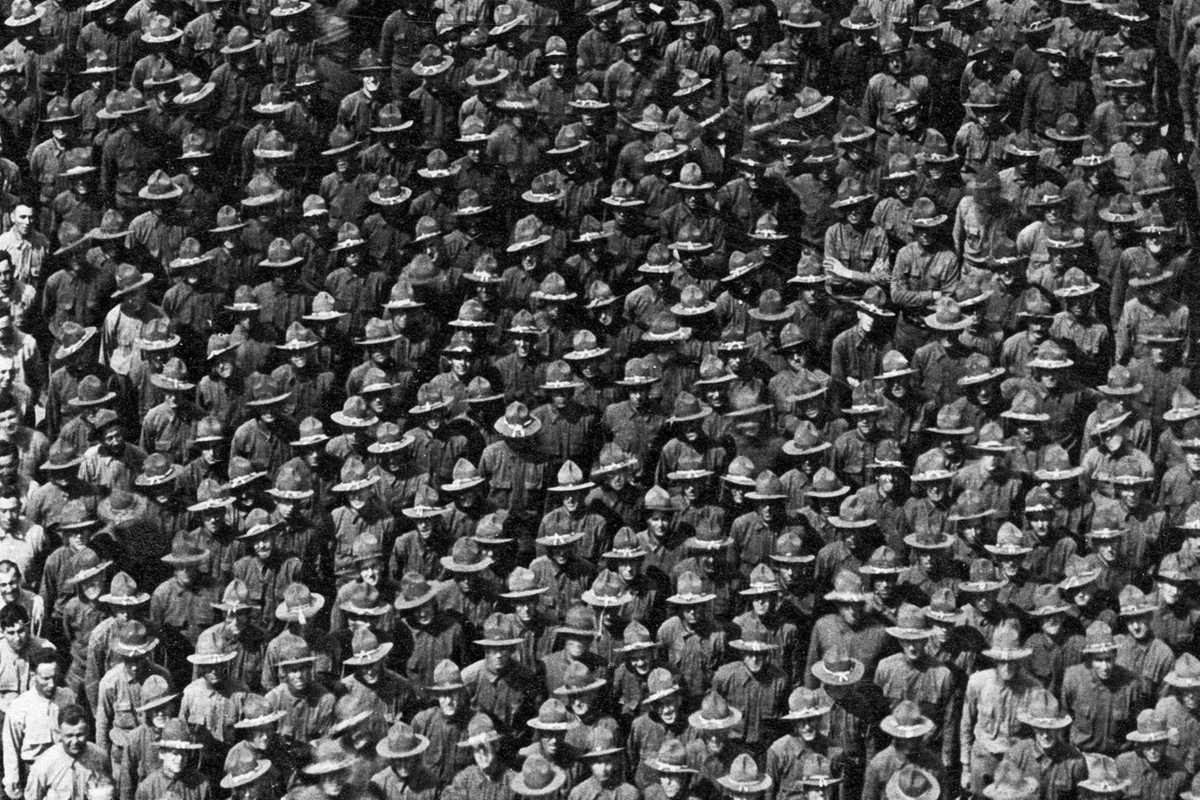 “These images, in their management of the social body, are forerunners the Nuremberg rallies, of Olympic opening ceremonies, or mass exercises in choreography in Soviet Russia and today in North Korea. They remind us of the slippage of patriotism into nationalism”.

These images required a week of preparation: Mole, on an 80ft viewing tower, would shout directions into a megaphone, while his assistants traced an outline of the image onto the ground; along these lines, bodies could then be arranged. It took hours. Mole, gesturing from his tower with a long pole in hand, would entice a lace edging to emerge from a row of white shirted men, shuffling into position in increments. The mass of bodies congregated for Mole’s photograph held a latent image in their midst, an image suspended in the tense of the un-become. Like a great city view, it relied on a line of perspective to make it visible: only from the viewing tower – a view frozen on Mole’s glass plate – would the crowd resolve into a readable image. These images, it should be noted, are not born from simple bird’s eye view, and they would not be legible by aerial reconnaissance – but instead they emerge from a very particular angle. Only in one place, atop the viewing tower, is the secret code of the image revealed, and each face is lifted towards the all-seeing photographer and his lens.

These image are patriotic, their intention is to incite that hearty, earnest feeling of nationhood in our breasts. But 100 years on, these images inspire, in my mind, unease. Perspective, we might remember, is an operation towards the representation of power – the control over a territory, and the arrogance of a viewer able to embrace, in one glance, the scale of his expanding nation. These images, in their management of the social body, are forerunners the Nuremberg rallies, of Olympic opening ceremonies, or mass exercises in choreography in Soviet Russia and today in North Korea. They remind us of the slippage of patriotism into nationalism.

The paradox of these images is this: they proclaim liberty, they celebrate the “living”, and yet, at the very same time, they exhibit institutional order and the dissolution of the individual by structure. I think of kettled bodies in a crowd, of Mole imposing borders, waving a truncheon to keep the reckless and undulating edges in line. To be ketttled is to be reduced, transformed from individual to collective: figureheads; fatherlands. We need to acknowledge that many of Mole’s images, also collected in this edition, count women in their midst. And yet, it is from the army that Mole drew again and again – because discipline is intrinsic to the soldier, with his uniform and cropped hair, his body already reduced to a unit. Thus, for Mole, the military was a perfect resource for his images, like pre-mixed paint. Indeed, these photographs served as a rallying point to support American involvement in the First World War; this is unselfconscious propaganda, so pure and uninflected it inspires a kind of awe.