“I consider the photograph as an imprint, remnant, of an activity. The fact that the photograph exists implies a viewer located it at a specific place and time”.

BF: I’ve been reading some of your interviews from the 80’s to present. What strikes me is the consistency of your outlook. There seems to be a firm grounding in speaking about photography as any other medium in the arts. It seems to dislodge speech from the normative rhetoric of being encumbered by strict photographic methodology, sometimes a banal series of treastises on the medium. For clarification, even with the alluding to painting often, can you pontificate on why photography as a medium is often times shelved through its mediumship to the withered bookcase in the ghetto of its practice? Why do photography enthusiasts need to adhere to a discipline mired in its foundations?

JD: Within the broad range of activities that would be characterized as “artist practice” is a discourse of objects, images, and language based assertions. It is the discourse of images, inclusive of images of art objects, which I find of primary interest. I see photographic images as the arena within which this broad discourse is collated and ultimately expressed. It is thus through photography that I participate as an artist.

I don’t believe that I have ever “characterized photography “as just like any other medium. Photography’s character as an indexical artifact, and as a “document,” is indeed unique. I feel that the previous marginalization of the medium is long past and not a subject that I am interested to address.

BF: Practice and conceptual framework. Your work is also relegated to the performance side of the lens. I am thinking of the series “As far as I could get”… performance, even if gestural in the “Zuma” series seems to be a big part of the work. It seems like a means to an end more than a position of catering to performance itself. Is the performative an oblique access point in the beginning of a work or is it something you strive to consider and the method of getting there a afterthought?

JD: I am not attempting to address issues of performance. That recurring element in some of my work is a result of an attitude, or personal perspective, concerning photography. I consider the photograph as an imprint, remnant, of an activity. The fact that the photograph exists implies a viewer located it at a specific place and time. I might parenthetically insert that I realize that new technology and Google Earth problematize this. What might be viewed as performativity arises directly from these perspectives. How many performance artists does it take to change a light bulb? I don’t know I left early.

EXPLORE ALL JOHN DIVOLA ON ASX

BF: We probably need to speak about dogs…one could draw all sorts of metaphors from shooting an animal chasing our steel encased self and we peddle the hammer down driving the car down the gravel road…was this another instance where the “happenstance” of the moment caught you? Are we all not chased by dogs through life?

JD: I am generally not interested in directed metaphors. Like most photography that particular work arose from observation. I was working on another project photographing isolated houses in the desert and came to the conclusion that the dogs chasing my car might present an interesting phenomenon to explore. That activity of the dog chasing my car in that context is quite fascinating enough to hold my attention. And, the manner in which a black dog is rendered with grainy photographic film manifests as a photographic object is what delights me. That said, I have always had an interest in the relationship between the literal specificity of a photographic reference and the abstract, or symbolic, nature of its reception by a viewer.

BF: Getting back to the gestural, the painterly, this seems to stem from an early interest in the idea of silver… silver paint, silver object, silver nitrate…. there is a soft poeticism in playing off the alchemy of silver and that of paint mixed and applied… how intrepid is your hand as a motivation for what you “record” nowadays… when I say gesture, I mean it in the physical movement of a “brush” to some degree…

JD: It is a trace with in a trace. An index within an index.

BF: Do you miss opportunity as someone behind a lens, opportunism seemingly a function of lens-based consideration over that of sculpture or painting? Is there ever a time where you think… shit… I wanted that image…. or is it generally that you come to it or it to you when it presents itself? You do not seem to seek as much as something finds you by proxy of your interviews previously.

JD: That is something one needs to get over. I no longer worry too much about individual images. I think more of bodies of work and how a body of work is a result, and artifact, of a process. Like fishing, many are not caught but it is being out on the lake that is significant.

BF: In “Despite Intensions” a series of works that you are showing with Pedro Alfacinha this month, you perhaps allude not only to the transient nature of photographic representation through use of saturated and bleeding light, but also to that of intention within an image and that perhaps intention is the enemy of reason. What I mean is that…your work and perhaps you seem to be at ease to allow… an image to “become” the work through process. It is an open idea that resolves itself not at inception, but at completion. This openness, which in my mind is severely lacking in contemporary thought almost nods at a conceptual tradition of chance that the Dadaists and surrealist were very much interested. Would you concur that this is a strong part of your process?

JD: Short answer, yes, the emphasis is on process. A starting point is the anthropomorphic impulse to project into the eyes of a person or an animal. The diptych form interests me because it invites a cognitive address from the viewer that proceeds and gestalt of the image. Why are these two images together? Then the use of colored flash links the images through incongruous lighting inviting a synthesis of the two images. Also, the print material, Cibachrome (later Ilfochrome), was a unique industrial material, which invited this rather artificial use of color. 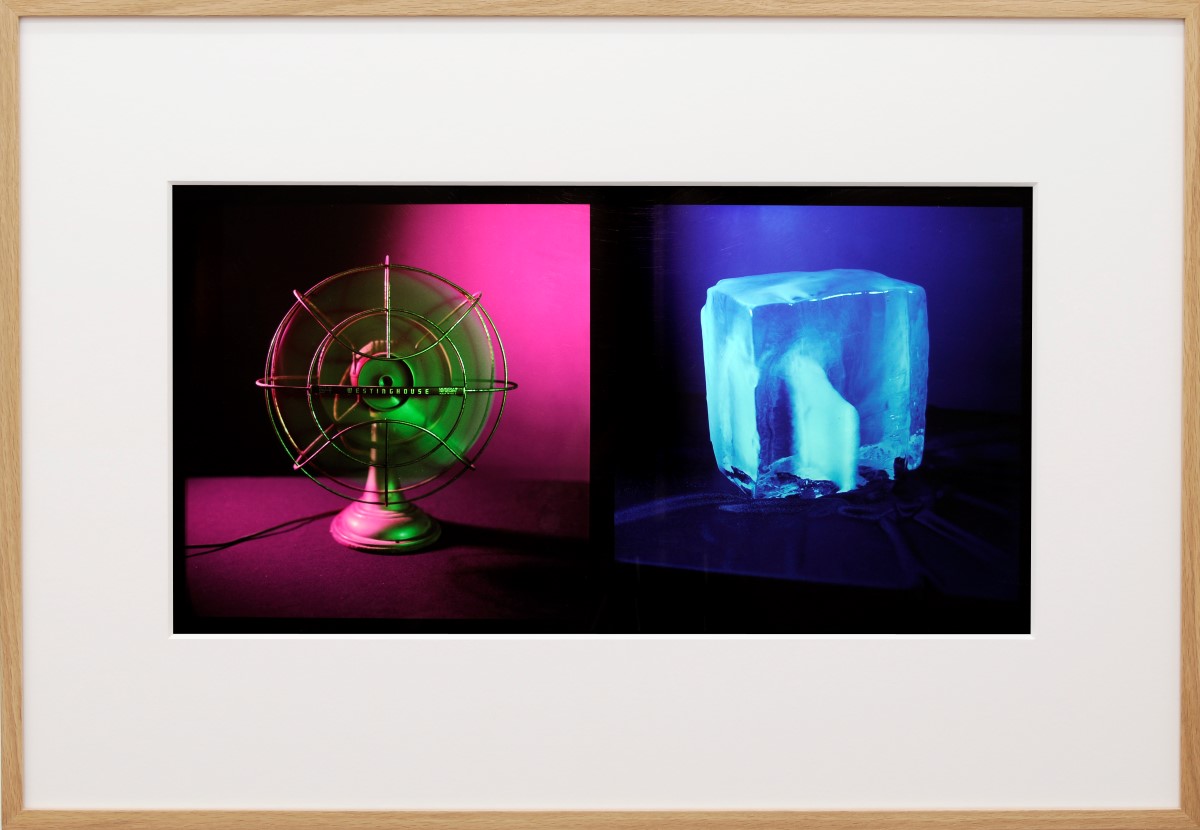 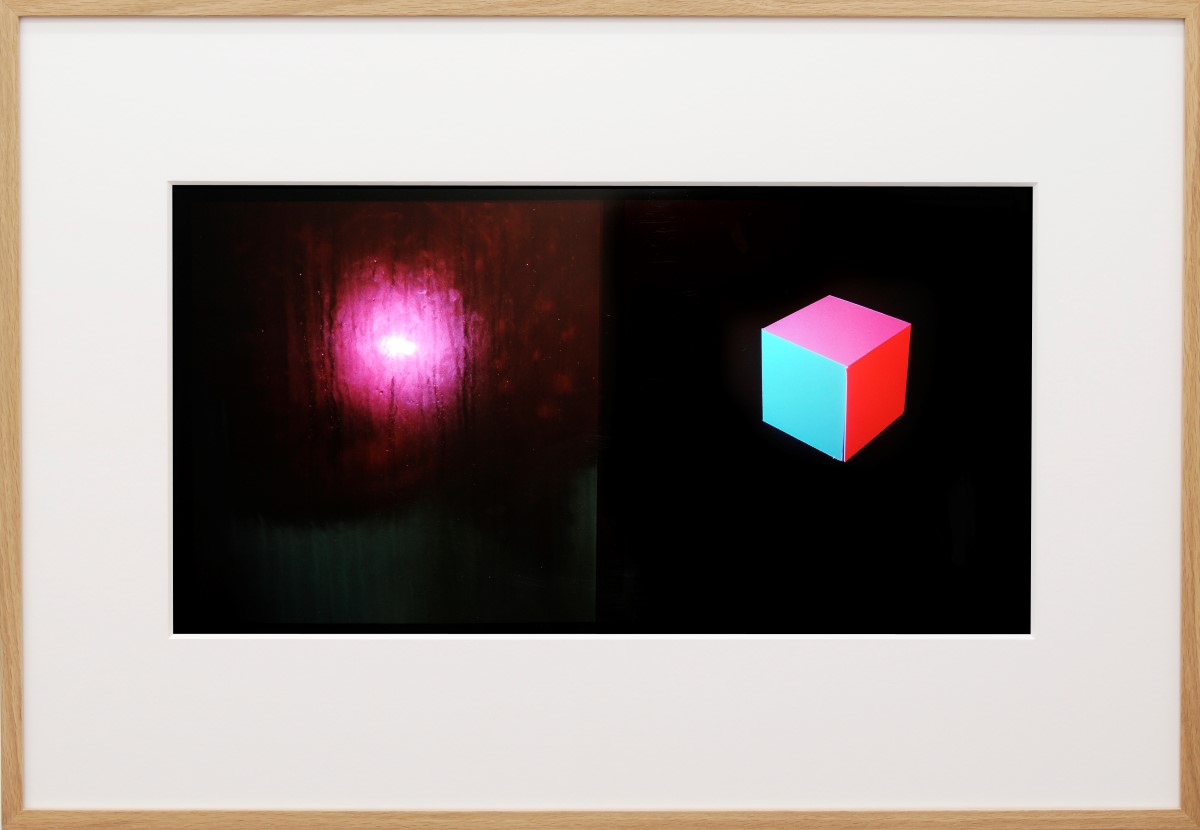 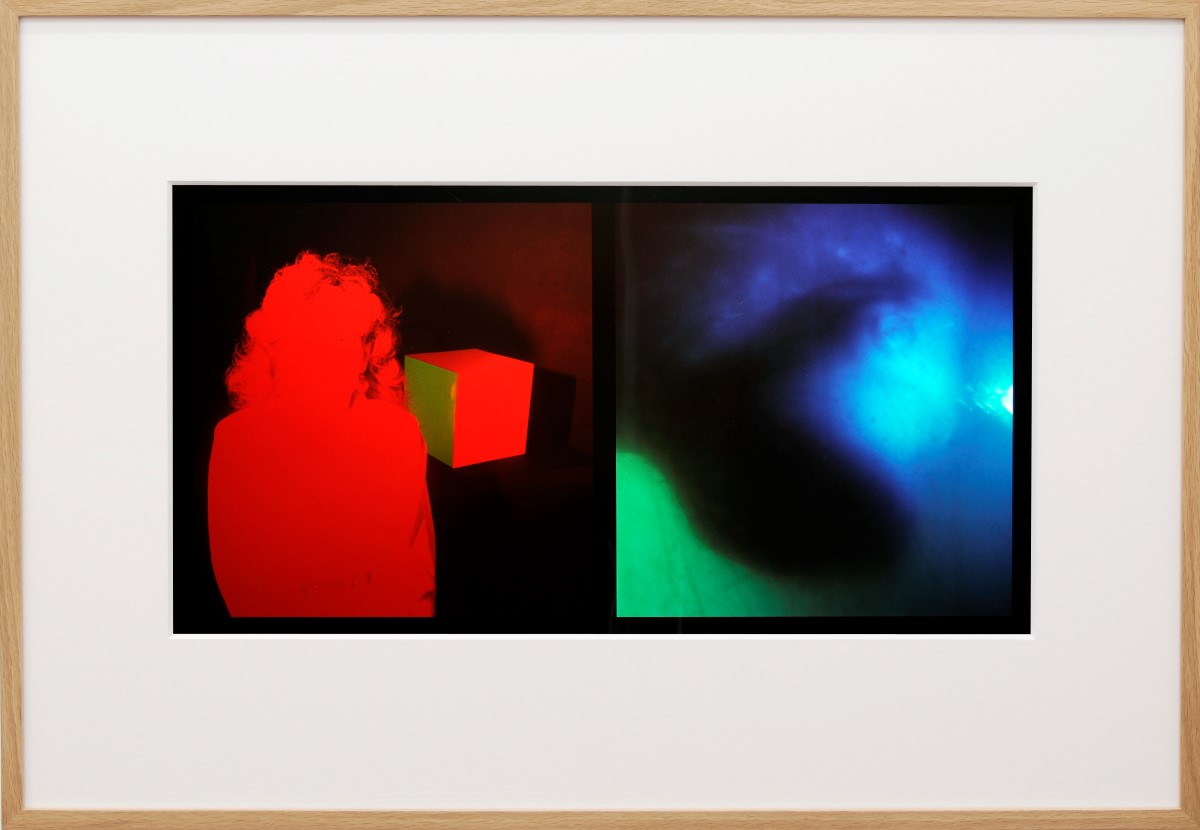 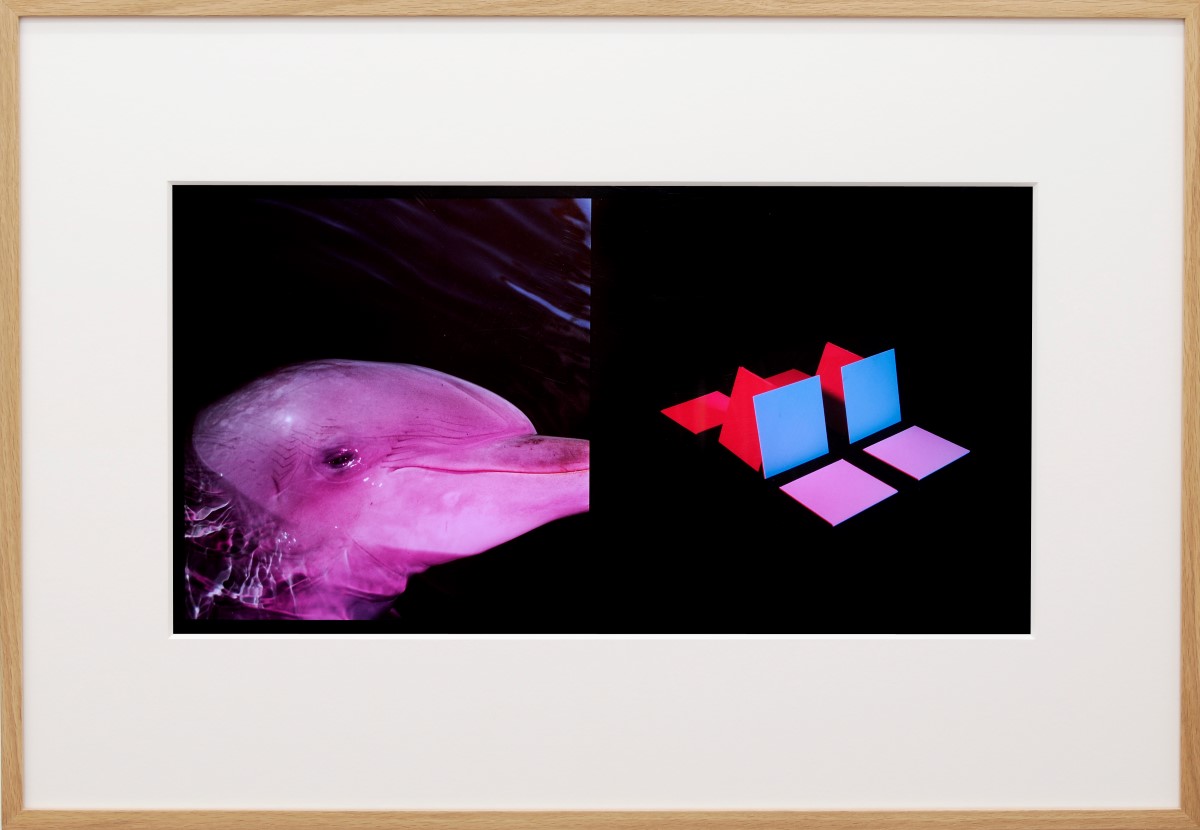 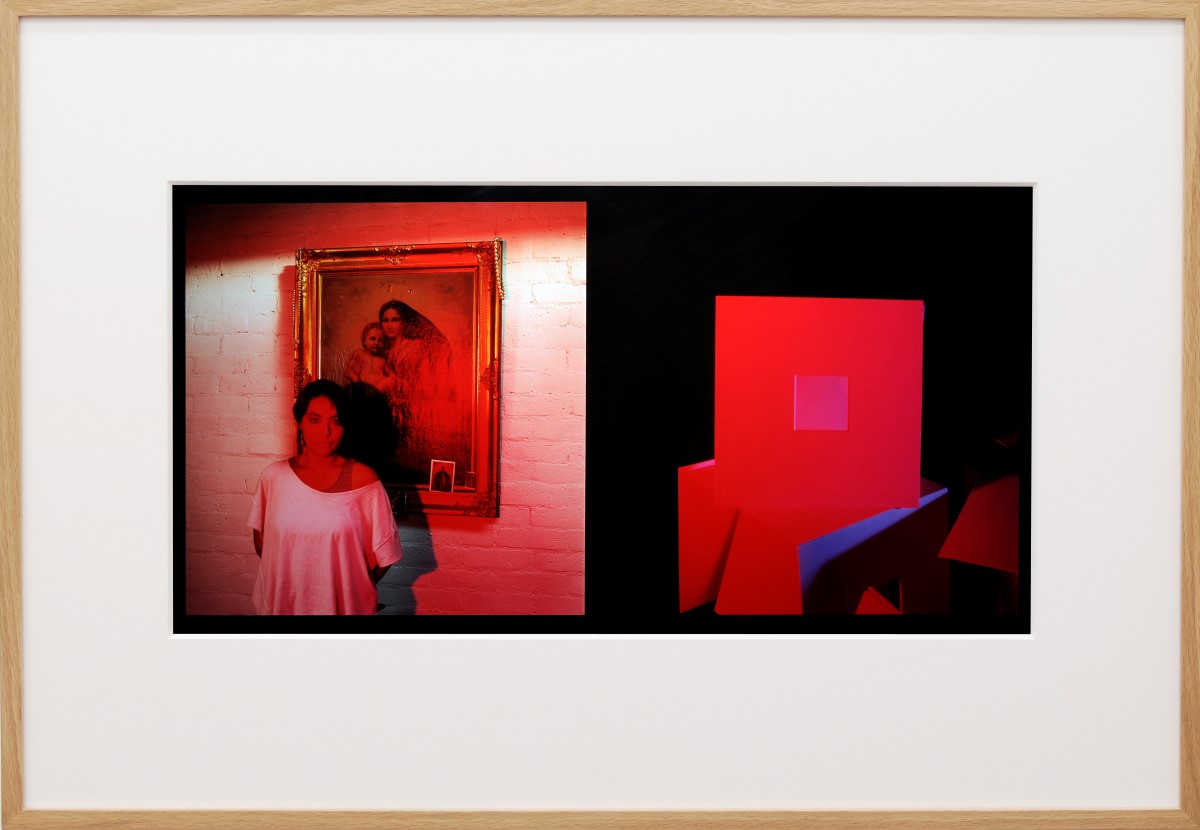 ” A starting point is the anthropomorphic impulse to project into the eyes of a person or an animal. The diptych form interests me because it invites a cognitive address from the viewer that proceeds and gestalt of the image”.

BF: Again, in “Despite Intensions”, the gestural format of the diptychs…gestural in the sense that in their inclusion, you are sort of diplomatically painting, or arranged in couplets for the viewer to consume. There are chromophilic elements throughout, peppered with the use of form in the way sculpture…could you read the works as painterly by this coupling?

JD: I do not surrender an emphasis on color or form to the discipline of painting.

BF:I keep asking people… I am at war with photography as a language, intended or other. My most sincere belief is that even though we treat photography as manipulative and perhaps an “untruth”, we still, through use of a relative system of acknowledgment pander to the visual “understanding” of what goes on within an image. This crutch cognizance is in direct antithetical treatment to that of the rest of the arts. People think they can “read” a bloody photograph and that there is some sort of universal language within. What are your thoughts on the language of photography?

JD: I don’t understand the question. Is there a ” language of photography?”

BF: Yes, do you believe in photography as having a relative value for communication?

JD: I guess that begs the question, relative to what? As I accept that art is communication, and I am a photographer, I must think that the medium has “value for communication.” Aside from the term value, I think that the development of photography has fundamentally changed human consciousness. One could write a book. If I think of India, and I have never been there, I have images and a sense of place in my consciousness. I would argue that the images that I have seen in photographs, film, and television are the primary source of that sense of place. More interesting, however, is that when I think of Los Angeles, and I have lived her my entire life, I also have mental images and a sense of place. Some of that is from direct experience but a significant component is also from photographs, film, and television. It is interesting to me that I cannot differentiate what is from direct experience and what is from mediated indexical sources. And, even more significant, I have no impulse to make that differentiation.

BF: The “George Air Force Base Work” is a look inward at the crumbling and apocalyptic infrastructure of abandoned military sites and barracks in America. Metaphor abound within the decline of Imperial America itself and the transient nature of war camps, can you tell us a bit about this work?

JD: That is a work in progress and I am not ready to consider framing it literally or figuratively.

BF: Some of the images remind me of Hiroshima after the bombing…can you give me an idea of what it feels like to work in desolate situations like this…is it unnerving based on the power structure it had previously represented?

JD: I would only say that my emphasis is more in what the space presents to me literally than what it might represent symbolically. They say that in photography content is automatic and I am interested in the inscribed histories of abandoned spaces, and this location does have a complex and layered history. However, it is for me primarily an arena of observational engagement and not primarily a source for didactic political assertions or metaphors.