Beauty is still able to cleave us into a libidinal consciousness and Cascade’s power lies in the way it contorts our parasitic drain on resource and increasing disharmony with nature, into a moment we recall in a dream or a memory, one that was possibly free and blissfully unhindered by a conscience.

I sit in the top of the wood, my eyes closed.
Inaction, no falsifying dream
Between my hooked head and hooked feet:
Or in sleep rehearse perfect kills and eat.

I never remember my dreams. Except once, recently actually. Yet I remember implicitly the act of dreaming itself in the same mould as one might a tryst with a former lover. Waking becomes almost as physical as fucking, I feel its heat, juddering my body into outward viscera of emotion, then ultimately from one consciousness to another. Consequently I cherish languishing in the fading embers of a dream, enjoying the tail end of that rush and the heat of what just happened slowly ebbing away back from my temples to the cartilage of my lobes until it’s gone and the sunlight of the morning takes everything but a trace of someone else I could be.

I don’t remember my dreams, but those traces contain landscapes, mostly natural, the sensation of them more than anything else. Abrasive tree bark texture against skin. The smell of moist moss and fungal undergrowth. A body, a scent, a taste. These traces follow me back through the concrete, the shiny reflective glass and pixelated pulses of the daily grind and those traces have vanished. The nature departed.

Cascade, from the series Les Amants was the first image of Noémie Goudal’s I encountered on a visit to the gallery Edel Assanti a few years ago. It is delicately poised as a photograph. Set to a dreamscape which might be your own, inviting a recall, but whilst there you’re obliged to navigate the synthesis of this dream as it becomes decay. Beauty is still able to cleave us into a libidinal consciousness and Cascade’s power lies in the way it contorts our parasitic drain on resource and increasing disharmony with nature, into a moment we recall in a dream or a memory, one that was possibly free and blissfully unhindered by a conscience. 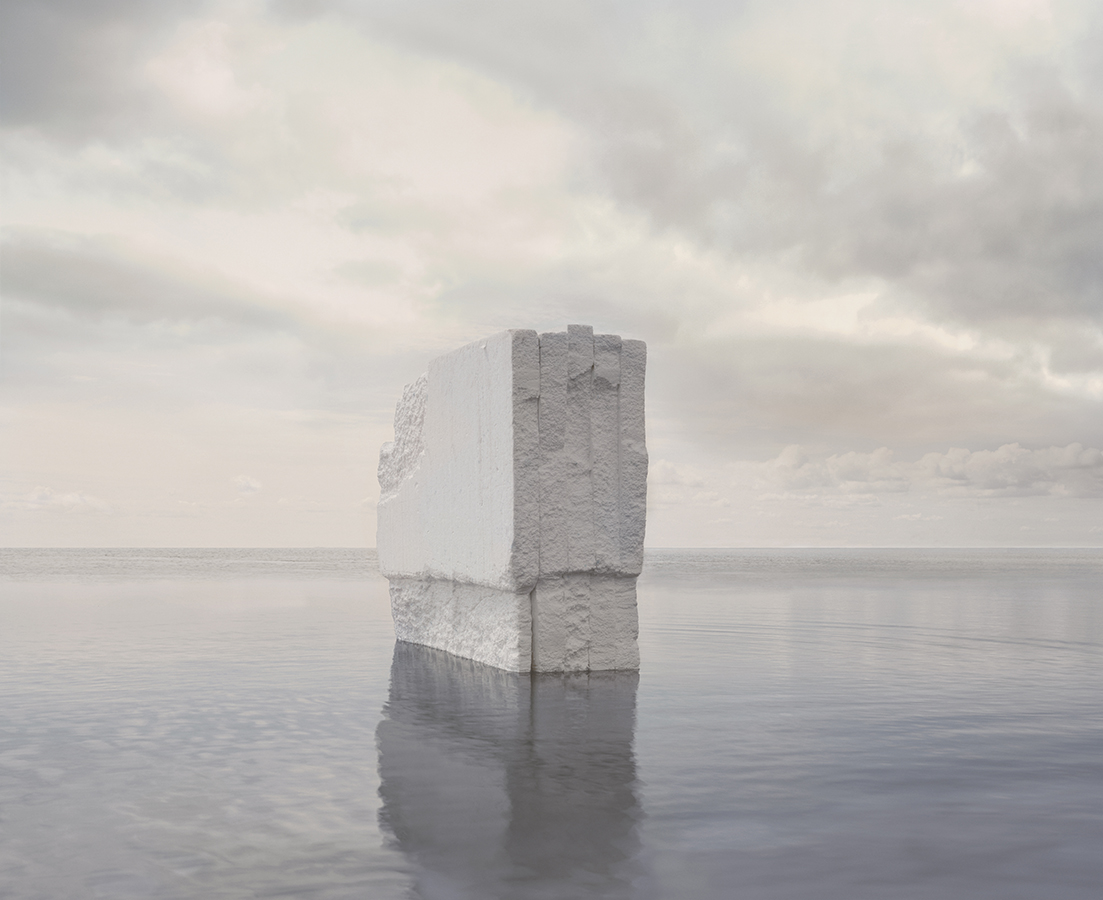 Goudal masterfully wields an engaging subtlety within the expansive illusory discourse she is having the viewer. What is the next manifestation of our longing? In the near future, will we need to create our own dreams?

In Haven Her Body Was, Goudal often leaves us to peer into the lobotomized remains of this dream that nature held for us. Each image holds an entrance into the ribcage of a carcass with both the ravages of time and our mentality of decay, slowly and methodically relieving these skeletal structures of their flesh. They make for a very real conversation as to why we’re in a somewhat blinkered hurry to accelerate nature’s own destiny of decay.

Goudal masterfully wields an engaging subtlety within the expansive illusory discourse she is having the viewer. What is the next manifestation of our longing? In the near future, will we need to create our own dreams? Look at how Goudal is able to stage such a moment, with an image such as Jetee (also part of the Les Amants series) or even within Study of Perspective I. The term magical realism gets bandied about generously amongst a creative or subversive work, whether words or images, that leans a little into the possibilities of our consciousness. Yet this magical realism, a precursor to the more immediate surrealism if you will, has somewhat insidiously become the defacto language. The 19th Century Russian author Nikolai Gogol was adept at exploring that language, even attempting to pierce the absurd singularity of society with an adventurous wandering nose, that mischievously left its owner and went on a rampage around the city. Or he would eke out an allegorical mutation, finding a mysticism that must somehow propel the humdrum or make sense of the bureaucracy and classist structures of Russian life during this time. Or a more contemporary equivalent of the adult fairytale, might be the eclectic literary exploits of American author and pediatric doctor, Chris Adrian, which pull together a variety of fantastical tropes that serve as withering and eloquent contemporary allegory.

It is difficult to escape into fairy tales now. Our world is too explicit, too extreme in its visibility, too naked with its secrets, voluminous in its unrest, consumed in its own deception scorching every retina with over-exposure. Yet, this magic or this surrealism is something we at large have embraced naturally through linguistic evolution but rather wantonly, with limited nuance. We are adept now at the language ‘of’ and ‘in’ image but it is a language that has drifted to the surface of our conversations without gripping any of the problems of the deep until the fault lines appear. Goudal’s playful poetry can still remind us of what we’re drifting away from.

Noémie Goudal will be speaking and exhibiting at Unseen Photo Fair 2015, 18-20 September with Edel Assanti London. American Suburb X are the official content partner for Unseen Photo Fair 2015, with exclusive interviews, features and galleries as we continue to champion photography as a conduit to exploring our wider culture, bringing you our distinct, fiercely edited take on Unseen’s look into the future of photography.

Michael Salu is a writer, editor and creative director. He is a director and partner at American Suburb X.