Eggleston’s wife Rosa remembers being awestruck when she saw his first slides beam out of their home projector, a quintessential “amateur” moment after the road trip, a travelogue (or, alternatively, how one might vet images for a fashion shoot before printing them for publication). “It was so saturated and so intense,” she said. “It was astounding to see color like that.”

By Anna Kerrer Kivlan, Massachusetts Institute of Technology, 2007 – The first part in a multi-part text on Eggleston.

Eggleston brought MoMA around eight carousels of slides made around 1970 from which Szarkowski chose seventy-five for the exhibition and, of those, forty-eight for publication in the Guide.

Despite their ostensive similarity to the amateur snapshot, noted disparagingly by Thornton and Kramer, the pictures were not made with the Kodak lnstamatic or Polaroid one might have taken on a family vacation, but rather with a Leica. That small camera carried with it a mystique, for it signaled a commitment to photography as art, and had been used by the most highly regarded black and white photographers Robert Frank, Walker Evans, Garry Winogrand, Lee Friedlander, Diane Arbus, and Eggleston’s role-model, Henri Cartier-Bresson. The fact that the Guide was the result of work done with a high-art Leica is significant, for during the time leading up to Eggleston’s exhibition, color photography had been denigrated as emphatically not art. It was badmouthed by photographers such as Evans (enshrined for his photographs of the Great Depression), who wrote in the late 1969 book of essays edited by Louis Kronenberger, Quality: Its Image in the Arts, “There are four simple words for the matter, which must be whispered: color photography is vulgar.” By this logic, Evans concluded that color film was an ideal medium for the rendering of subjects that were likewise vulgar:

When the point of a picture subject is precisely its vulgarity or its
color-accident through man’s hands not God’s, then only can color
film be used validly…. Almost always, color can be used well only by
a photographer who is an artist of perfect taste-Marie Cosindas for
example-and of immense technical mastery; for color has to be
controlled and altered from start to finish by selection of film, by lens
filters, and in developing and printing.”

Frank, who had been lauded for his searing 1959 documentary series, The Americans, was known to have concluded simply that “black and white are the colors of photography.” As with Evans, Frank’s opinion was not to be taken lightly; in Szarkowski’s esteemed view, the Swiss photographer’s The Americans series was one of the works that established the main thrust of photography in the fifties, along with the 1952 founding of the photography journal Aperture by Minor White.

Color film had been on the market since the 1930s-as early as 1948, articles in The New York Times covered amateur exhibitions featuring multiple-toned color prints while new developers were offered that aimed to improve detail in color prints, through the Kodak Dye Transfer process. It is therefore telling that color photography did not come of age as an art form until the late 1960s.16 MoMA’s very first exhibition of color photographs was in 1962, featuring work by Ernest Haas.17 While Haas’s work, according to Szarkowski, was “handsome and even inventive,” it fell short of Eggleston’s later accomplishment because it was “dedicated to a basically familiar idea of beauty, one very indebted to painterly traditions.”18 MoMA’s next attempt at mastering the art of photographic color was a 1966 exhibition of the still life portfolio of Marie Cosindas. Invitations were mailed to thousands of Polaroid stockholders in Connecticut, New Jersey, and New York on thick card stock with a glossy Cosindas Polaroid of flowers in a vase pasted on the front.19 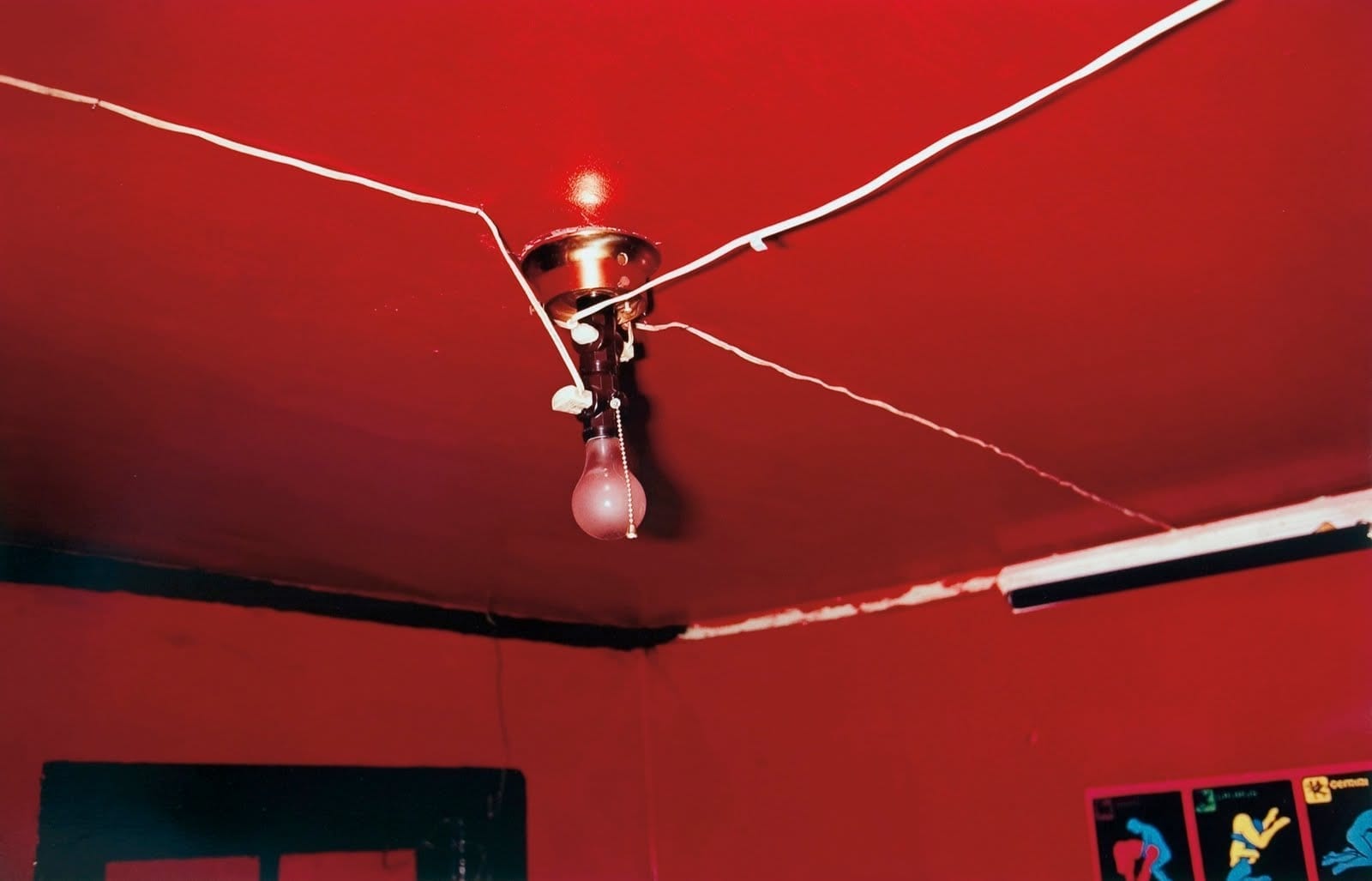 Eggleston’s hobby was to watch thousands of rows of amateur snapshots being developed at the local photography lab.

According to a MoMA press release, the exhibition was the museum’s first to be devoted entirely to prints made by the Polaroid Land Process.20 The 4 x 5 prints “specially matted and mounted on color papers chosen by Miss Cosindas” were described as having “exotic color and startling detail.” To Szarkowski, the photographs-“as real and as unlikely as butterflies”- inhabited, as for him artistic photographs must, a timeless realm. Indeed, the images possessed an “otherworldliness” that referred to a “place and time not quite identifiable-a place with the morning-fresh textures and the opalescent light of a private Arcady, and to a time suspended, as in a child’s long holiday.”21 Ten years later, in the introductory essay to William Eggleston’s Guide, Szarkowski cited Cosindas’s work alongside Irving Penn’s as the few “conspicuous successes of color photography.” Yet neither Cosindas nor Penn had resolved the issue of color within the tradition of so-called “straight,” uncontrived photography. Their achievement had thus been less than Eggleston’s, having amounted only to “masterly studio constructions, designed to suit the preferences of the camera” and dependent on a “high degree of prior control over the material photographed.22

Critical and media response to the Haas and Cosindas exhibitions, and to Helen Levitt’s 1974 show of color slides as part of MoMA’s “Looking at Photographs: 100 Pictures from the Collection of the Museum of Modern Art,” was meager in comparison to the coverage of Eggleston’s show two years later. In a short blurb about Levitt’s forty color slides of New York street life taken after 1971, The Village Voice took note of the color issue only by observing with disinterest: “Purists may feel that great documentary photos still come only in black and white.” Park East’s brief mention of the slide exhibition, which was “shown in continuous projection describing New York street life,” makes no mention whatsoever about color.23 Color film was, at the time, inseparably associated with magazines such as Life and Vogue, with television, Super 8 home movie cameras, and Technicolor movies. Color film was not the medium of the fine artist. It was better suited the director of raunchy, sex-and-violence-crazed double features shown at the local movie theater. How could the same medium exuberantly producing trash cinema be called upon to make something worthy of MoMA’s walls? Never before had such an inherently uncouth medium been smuggled into the rarefied world of high art. There was no mistaking it: color film was a wildcard for the art world.

Despite the less than honorable reputation of color, Eggleston’s wife Rosa remembers being awestruck when she saw his first slides beam out of their home projector, a quintessential “amateur” moment after the road trip, a travelogue (or, alternatively, how one might vet images for a fashion shoot before printing them for publication). “It was so saturated and so intense,” she said. “It was astounding to see color like that.”24 Around that time, Eggleston’s hobby was to watch thousands of rows of amateur snapshots being developed at the local photography lab. He remarked in a 1993 interview for History of Photography:

On a typical evening, maybe we might see twelve pictures on a ribbon a few
inches wide, a continuous roll of paper. Maybe at one minute we might see
twelve or fifteen pictures that two people made on their first trip after having
been married, and they forgot to have them developed. And years later they
sent them over and here I was looking at them… it was one of the most
exciting and unforgettable experiences as a whole-and educational for me.25

Asked in a recent phone conversation how viewing amateur photographs in a lab could influence the making of artistic photography, Eggleston spoke with emotion, placing the amateur photographs he had viewed somewhere in an idyllic past, which, coupled with their small size and grainy look, heightened their exquisiteness to him:

I had a close friend who worked there, not an artist, he managed a certain
color lab, produced endless amounts of people’s snapshots, loved to see
them come off the machine. He gave me a great many ideas. But this
fellow was not an artist at all. He just managed this lab… they would
develop a lot of rolls that people had taken many years back, on a
honeymoon and were so beautiful, almost kind of grainy, but the prints
were beautiful-little tiny small prints. I would enjoy spending time with
him, I still love him. I would drop in and watch what was coming out.26 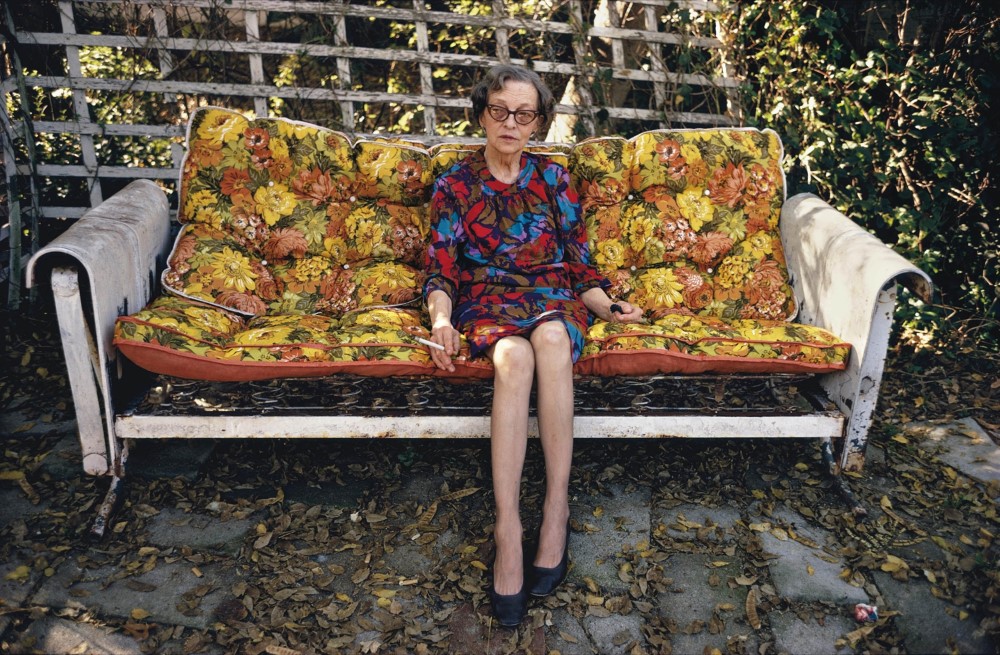 But Eggleston showed neither slides nor strips of commercially developed snapshots when it came time to produce the MoMA exhibition.7 Eggleston’s use of the dye transfer process, increasing the preciousness of the photographs as artistic objects, differentiated them from the typical snapshot they sometimes closely resembled.

But Eggleston showed neither slides nor strips of commercially developed snapshots when it came time to produce the MoMA exhibition.7 Eggleston’s use of the dye transfer process, increasing the preciousness of the photographs as artistic objects, differentiated them from the typical snapshot they sometimes closely resembled. The expense and time taken by the process limited the number of photographs reproduced. So tedious was the process that Kodak stopped making the materials used for dye transfer in the early 1990s.28  Dye transfer, Kodak’s proprietary process, renders the richest tones in color photography and was the most expensive printing process Eggleston could have chosen at the time. Each print cost him several hundred dollars and the multiple-step process took (and still takes) a minimum of three days per print. The printing press uses four separate printing plates, one each for the three primary colors (magenta, yellow, and cyan) and one for black. Each plate is engraved with a halftone image for one of the colors, which is coated with a thin layer of oil-based ink. The four plates then transfer their ink onto the surface of a sheet of blank paper to make the color pictures. The final picture is not created chemically on the paper, but rather assembled on the paper’s surface from four separate screened color images. Such challenges meant that, while Eggleston had been a proficient black and white printer, he stopped printing himself after he began shooting in color. Only a dedicated specialist could do the job. The expense, level of skill, and rarity of the dye transfer process rendered Eggleston’s images unattainable for the average person with a Polaroid camera. Thus, despite their apparent similarity to the snapshot (and the critical reaction such a similarity fueled), they were “art” indeed.29

Dye transfer was a process largely used in fashion photography, and Eggleston’s first printer in New York, Don Gottlinger, had worked primarily for the fashion industry.3 Fashion, however, is only rarely and anxiously art, no matter how many models stood in front of Jackson Pollock’s 1950 Autumn Rhythm.31 So while the battle to make photography an art form “had been fought and won” in the late nineteenth and early twentieth centuries by black and white photographers, most serious photographers in the late 1960s and early ’70s still believed that the formal problems of color-the exaggeration of hue and the difficulty of organizing color combinations-coupled with its ties to advertising and the commercially-developed casual snapshot rendered it coarse and difficult to work with.32

EXPLORE ALL WILLIAM EGGLESTON ON ASX