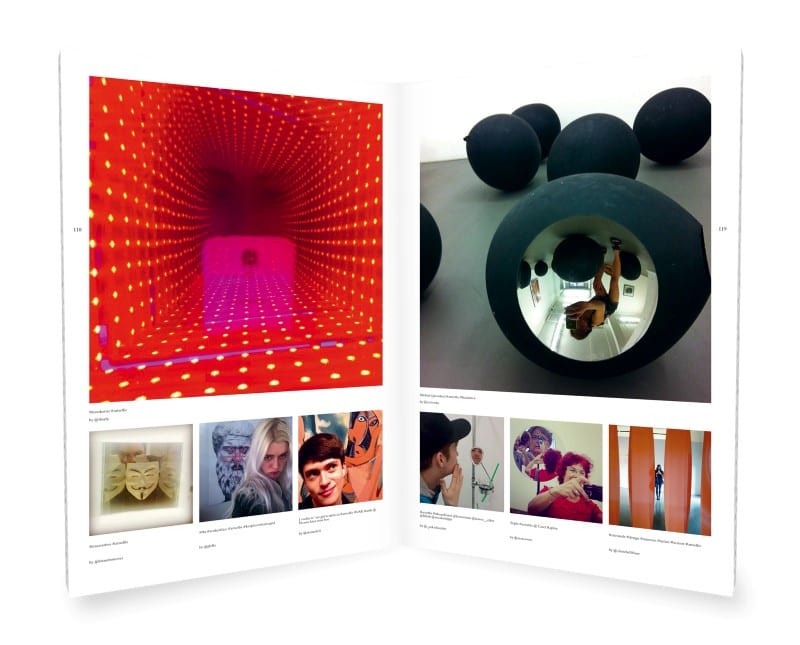 A short history of the selfie would trace the transformation from tawdriness for all to kitsch, for some.

Dis, #artselfie, is a fun book that only half-bears the scrutiny it invites. The premise, that the collection of selfies taken in art spaces points toward a new method of instantaneous, network-oriented consumption and production, what dis calls prosumption, is a simple and powerful observation/engagement. Yet the project is marred by extra and unnecessary theoretical overjustifications that run from contradiction towards bad faith. That the project manifests itself as boosterism of a phenomena rather than inquiry or critique is neither necessarily bad nor suprising, given that dis, the new york based culture collective, finds its fullest expression in its operation as a brand. The problem is that #artselfie, as an exercise in brand promotion, doesn’t hold the revolutionary properties ascribed to it.

Take Marvin Jordan’s claim, “What is historically unique in the #artselfie is that it heralds the decentralized, disruptive power of the Internet infiltrating the institutionally guarded walls of the art world.” You may be imagining a Jacobin scene free netizens storming their bastille, but #artselfie, however, eludes all mention of the power hierarchies within either Internet communities or the telecommunications industry it relies on. These are, very basically, institutions with more power and less accountability than any art space. Further, the presence of the word “disruptive”, the hobgoblin of silicon valley press-releases, belies a crucial similarity with tech/ “sharing” economy: #artselfie is a physical artifact of the sharing economy business model: other people do the labor, dis turns it to capital.

Perhaps springing from a genuine uneasiness about their (successful) position within the market, dis proclaim themselves accelerationists. Accelerationism, an esoteric, controversial and dubious branch of Neo-Marxism could roughly but succinctly be described as praxis that encourages the worst excesses of capitalism as a means of hastening the next stage of historical development. Taken at face value, it incorporates the ideological teleology of Marxism, the assumption of a grand narrative of progress aided by brand-strengthening technology, with none of the moral impetus. It’s possible that Dis is merely in the process of constructing their own vocabulary in a field where the lingua franca is Marxist jargon. Less charitably, it could be the case that they’re self-consciously turning das Kapital into cultural capital by employing it as an empty signifier.

Initially it seems as if the book might offer a sociological investigation of what, precisely, democratic prosumption of art entails. The cover image, which seems to suggest a critical distancing from the #artselfie phenomenon, is not an orthodox selfie but rather a photo of someone else taking a selfie. Likewise, the first image in the book is not of an art space, but a photograph taken of a consumer-quality print of Botticelli’s Birth of Venus in a private apartment. Quickly after that is a selfie taken with a sphinx at the met. 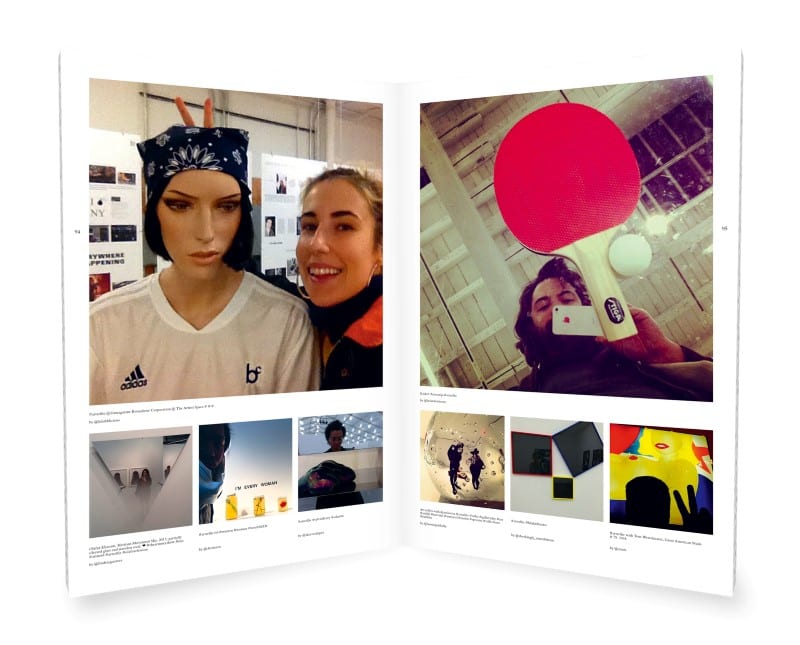 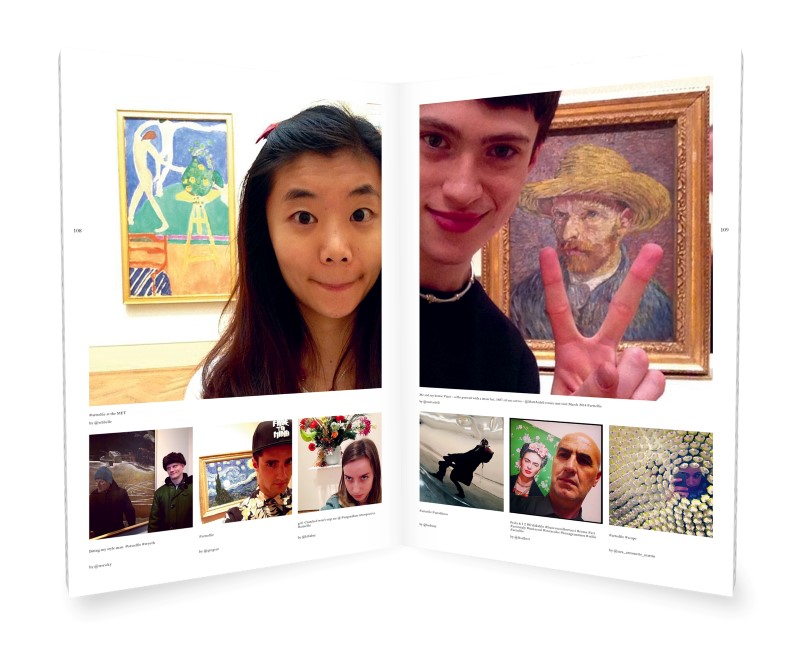 But these images are ultimately outliers, and their subjects outsiders, when contrasted with the demographics of the rest of the book.

If you do your own search for #artselfie most of the photos you find will be like this. Photographs taken by non-artists taken in front of bad art in places that aren’t New York or London. But these images are ultimately outliers, and their subjects outsiders, when contrasted with the demographics of the rest of the book. The crowd in #artselfie, while young, are hardly art-world outsiders. The demographics skew heavily towards young artists with prolific and high-profile social media presences, Sam McKinniss, Petra Collins, Amalia Ulman, Ryan Trecartin, Jeanette Hayes (several times) and often @dismagazine itself. This could, conceivably, be chalked up to the nature of the artselfie, which depends on proximity to art and art-spaces which are themselves do not follow an egalitarian distribution but just a casual search of the hashtag proves that people have Instagram in St. Louis. The selection of images for the book is not random and creates a binary of inside and outside that contrasts knowingness with naiveté.

It calls to mind Cory Arcangel’s similar book, Working on my Novel and the criticisms leveled against it, basically, that the project operated as a one-note joke on provincial rubes who didn’t know they couldn’t write novels. #artselfie is a relevant phenomena, at least more so than people maybe or maybe not writing novels, and not, I think, mean-spirited in the same way. Still, there are those that get it and those who don’t.

The first selfies I ever saw were flip-phone photographs that functioned as flirtatious advertisements for other teenagers on myspace. A short history of the selfie would trace the transformation from tawdriness for all to kitsch, for some. Here, there are people who enjoy the photos they’ve taken and other people who like the small thrill of doing something tacky in a museum and that’s where the heart of the book lies, in kitsch, in self-advertisement and free advertising for Yayoi Kusama, Jeff Koons, Anish Kapoor, and of course dis.

Dis clearly does not want to shatter capitalism, and that is ok, but they don’t have to bullshit about it. It seems unfair, absurd even, to expect dis to carry water for democracy, Marxism or anything like that – it’s just that they raised the subject. A simpler explanation, stripped of the jargon that frames art as a redemptive process, would be that they are making art of the conditions of exchange that shape the world. Either way, the future doesn’t need pushed towards and the day when attractive young people with camera flip hegemony on the museum docents seems to already be at hand.

ASX’s Owen Campbell is an an artist and writer from Wilkinsburg, PA.