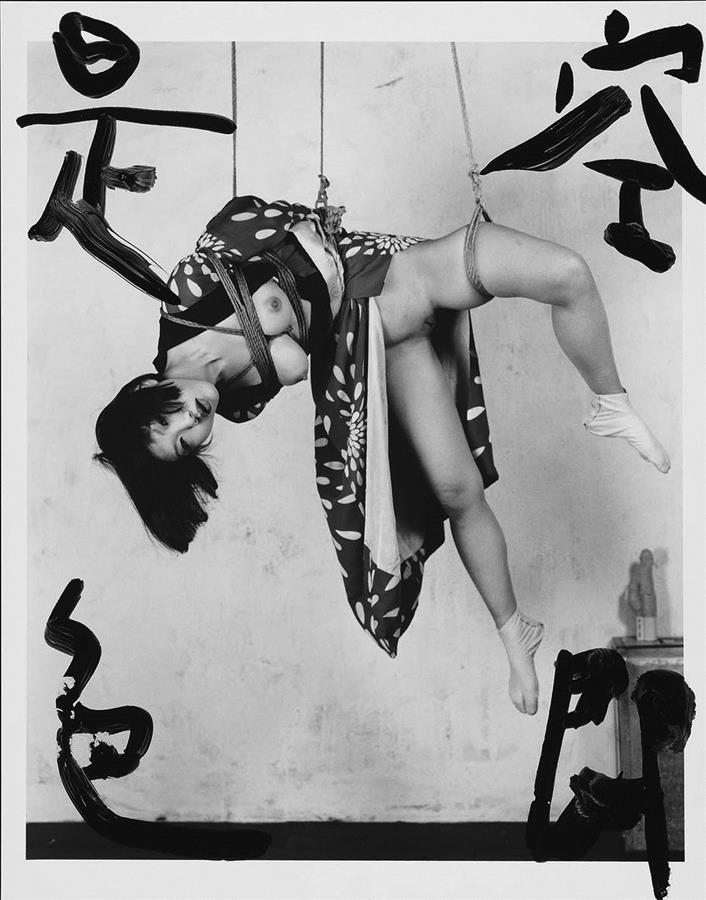 Feeling of Spring Unworthy of Compassion.

As soon as I open I open Marvelous Tales of Black Ink I’m welcomed by a woman with mysterious eyes, her tits squeezed by hemp rope, She’s looking in the camera with a vague hint of ennui like she’s out of some existentialist version of Nagisa Oshima’s “In the realm of senses”. Her flowery kimono foretells the flowers on the next spread. Some calligraphic Japanese characters poke from the edges of the frame like in a deck of dirty cards.

It’s easy to dismiss Marvelous Tales of Black Ink (from now on “INK”) as the Nth book of Araki of bound women and flower (that in a way is exactly what it is). That’s exactly the trick Araki plays on Western eyes: like a real master he disguises his real skills as an easy piece. Nevermind the fact he goes boasting that he’s a genius of photography or that he wears a T-shirt with his face on it.

INK goes back to the heart of Araki’s stylistic influences: all the way back to the open sexuality of Edo era in 18 century Japan and its sexually explicit woodblock printing, the Shunga.
Instead of reaching for the future, Araki is looking back, embracing and reinterpreting the tradition of that long gone era before the Westernization of the Japan. Instead of adding new elements to his language, he chose to refine his dearest themes to their essence.

INK gives new life to ancient forms of Japanese art. It’s a classic modern: all of its elements date back to artistic traditions: flowers arrangement (Ikebana), bondage (Kinbaku), calligraphy (Shodo). With those few elements Araki plays with confidence within the circumscribed boundaries of the traditional Japanese house. It’s almost ironic that Araki never cared if his work was labelled as art or pornography. Its main dish, women in bondage and flowers, both means beauty and death in Araki’s dictionary. He is well known for its eroticized pictures of flowers but also for his “Winter Journey”, where he put flowers in the coffin of her wife Yoko. There are multiple references to birth that in one picture is even enacted by the mean of a toy doll next to the legs of a pregnant women.

The women’s vivid expressions are part of an untold story, nothing but the real fiction provoked by the interplay between Araki and the models during the photo-shooting lived as a performance act; women might be dressed in ropes but there’s no submission or humiliation in their eyes, instead they seem to be looking inward.

I can imagine Araki performing his ice-breakers while shooting:

“That crab is looking at you!” “Are you looking at the past or at the future?”
“My shutter is going to make your unhappiness disappear” “or also ” Grab that vase, like it was a penis”. 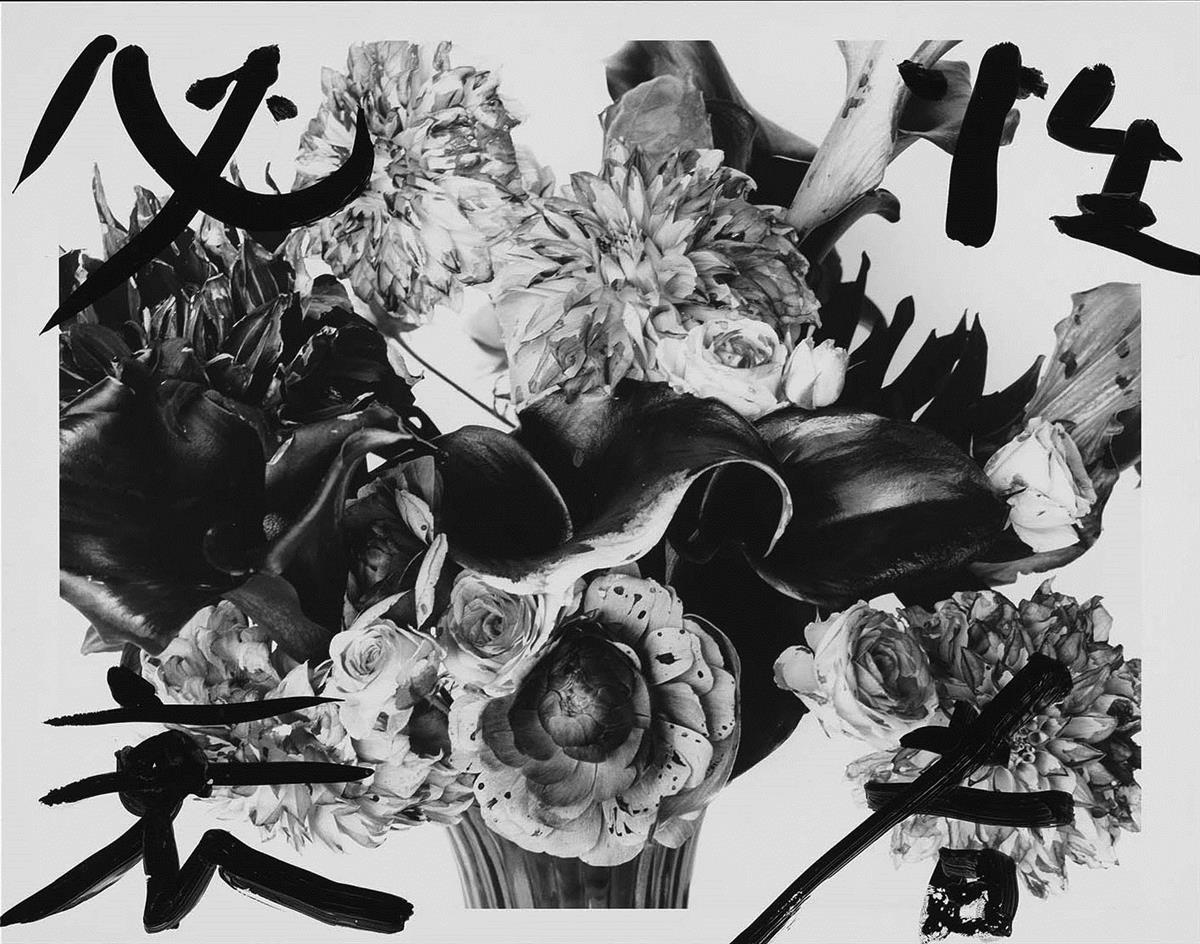 Unaware of being bound in ropes, the women smile, like nothing was happening, just going on with their lives, which are ignorant of the fate inscribed not in stars but in enigmatic innocent toy animals they’re surrounded by.

I was not sure if looking at INK as a return to the roots of Japanese art was a legitimate interpretation of the work, so I had translated from a friend some of the calligraphy writing on top of the images, those beautiful black ink kanji poking from the four sides of every pictures like in a deck of sexy cards.

There’s plenty of sex references but to my surprise the hand-writing’s content is very traditional in terms of form and content: he writes about seasons, Buddhism, death and beauty, creating a surreal framework for his pictures through chaotic references to many aspects of Japanese culture. He plays with the inherent ambiguity of Japanese language where the same character means many things at once, his wordplays reveals a layer of sexuality embedded in the very fabric of language. The translation is never literal, ambiguity is embraced as a liberation. 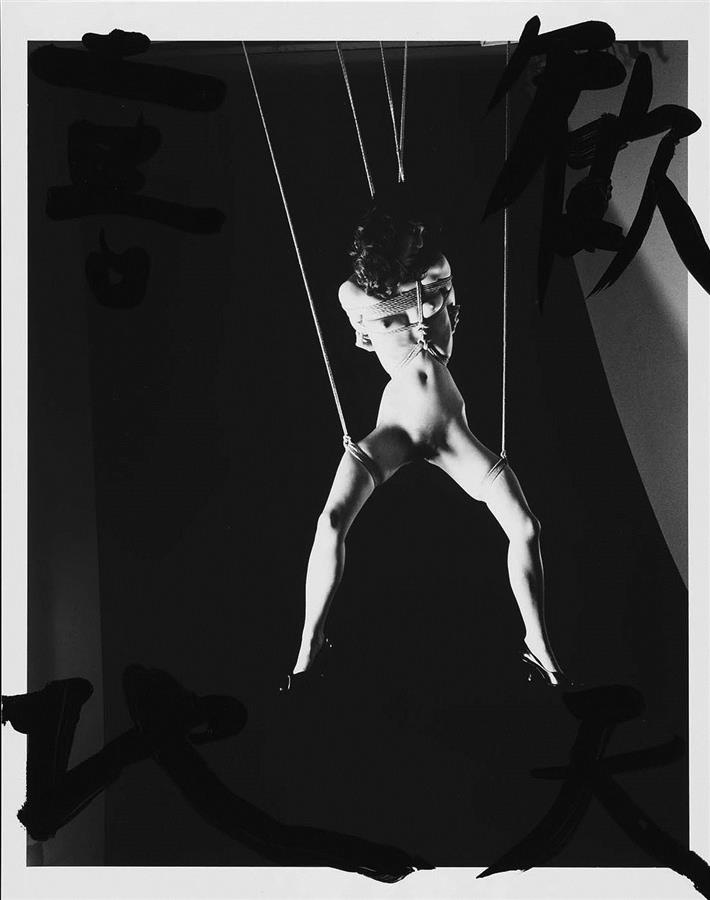 What am I looking at? A compendium of traditional Japanese art? A Buddhist treatise? Zen and the art of bondage? A collection of dirty pictures? A map to the mind of Araki? A self-reflection upon beauty and death? All/none of the above?

“The blooming of cherry blossom”

Transcendence of the self.

Bankofueki: the immutability of things.

Kantenkichi: happiness on both earth and heaven.
Giving flowers, unveiled moon (“Arawa”, the kanji for “unveiled” can also mean naked, obscene but when used as an adverb it becomes frankly, openly). Beautiful women die young (“Bijin hakumei” (美人薄命) is a Japanese expression meaning that the life of a beautiful woman is never long or joyful, but instead full of desperation and loneliness, always near to the precipice of death. Instead of the correct kanji for “Haku”, Araki uses the homophonic kanji meaning “white”. The white color in Shintoism religion is deeply linked with death. )

In Philip K Dick’s novel “Ubik” the truth of being dead is revealed through cryptic messages by a God living in an aerosol can. In Araki’s universe the inevitable is hidden within toys, at the same time both silent profecies and captions speaking in a secret tongue of plastic. Lost in a universe of endless dream where time rewinds. Objects morph back to their primal essence. Both Buddha and Ubik can live in plastic toys. Time comes to its endpoint.

The girls floating in mid-air through elaborate suspensions meet the ground with a crash. And with a crash the book ends on a bitter note: a girl that we saw before in the series is laying on a floor like she just fell. The face can’t be seen but she can be recognize thanks to the huge scar she got on her head, matching the crack on the concrete pavement she’s laying on. The reassuring backdrop of the old Japanese house has disappeared: no walls in sight, just a broken concrete floor. She’s tied up, hands at her back. A menacing crab is reaching for her: gone is the playful way Araki used the animal toys throughout the book, the plastic crab means business. The calligraphy on the border of the image reads: 3 2 1 death. Cut. 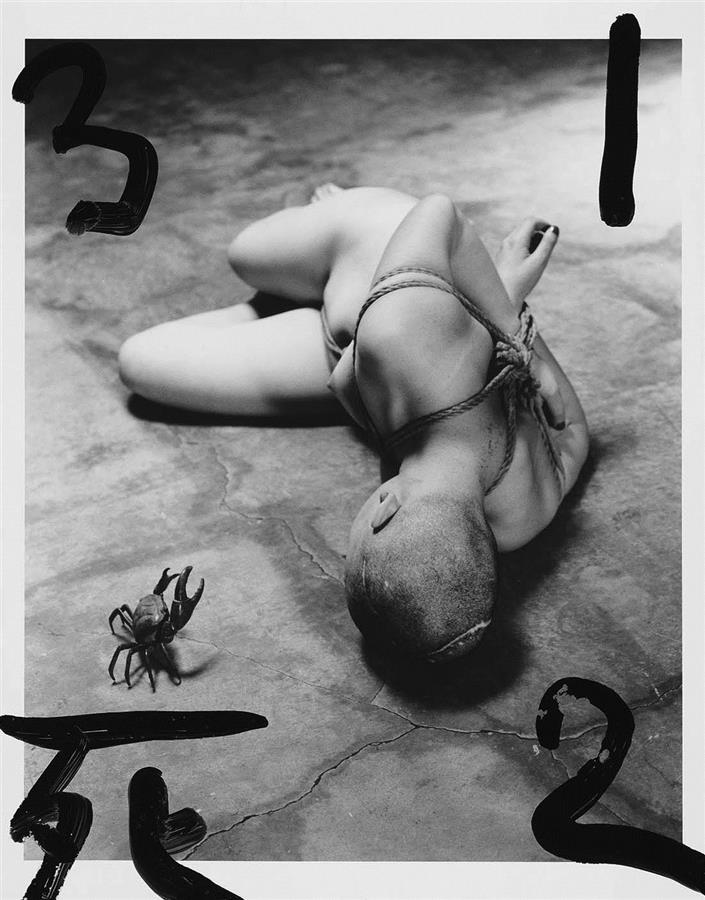 It’s the same narrative device we saw in Ravens, which last picture of a homeless resembling a crow, make explicit the link between crows and human suffering, it asks to go back to the images and look for the missing link.

Araki is letting his fantasy universe crumble, looking for an appropriate ending to his own life-work. His latest major exhibition “Ojo Sashu – Photography for the afterlife” seems to point in the same direction: the master is getting ready to go and he’s shooting his own version of an Egyptian book of the dead.

EXPLORE ALL NOBUYOSHI ARAKI ON ASX