Excerpts from Francis Bacon: I Painted to be Loved

FRANCIS GIACOBETTI: Your painting is often described as violent…

FRANICS BACON: My painting is not violent; it’s life that is violent. I have endured physical violence, I have even had my teeth broken. Sexuality, human emotion, everyday life, personal humiliation (you only have to watch television)―violence is part of human nature. Even within the most beautiful landscape, in trees, under the leaves the insects are eating each other; violence is part of life.

FG: What does flesh represent to you?

FB: We are born with a scream; we come into life with a scream, and maybe love is a mosquito net between the fear of living and the fear of death. That was one of my real obsessions. The men I painted were all in extreme situation, and the scream is a transcription of their pain.

Animals scream when they are frightened or in pain, so do children. But men are more discreet and more inhibited. They do not cry or scream except in situations of extreme pain. We come into this world with a scream and we often also die with a scream. Perhaps the scream is the most direct symbol of the human condition. 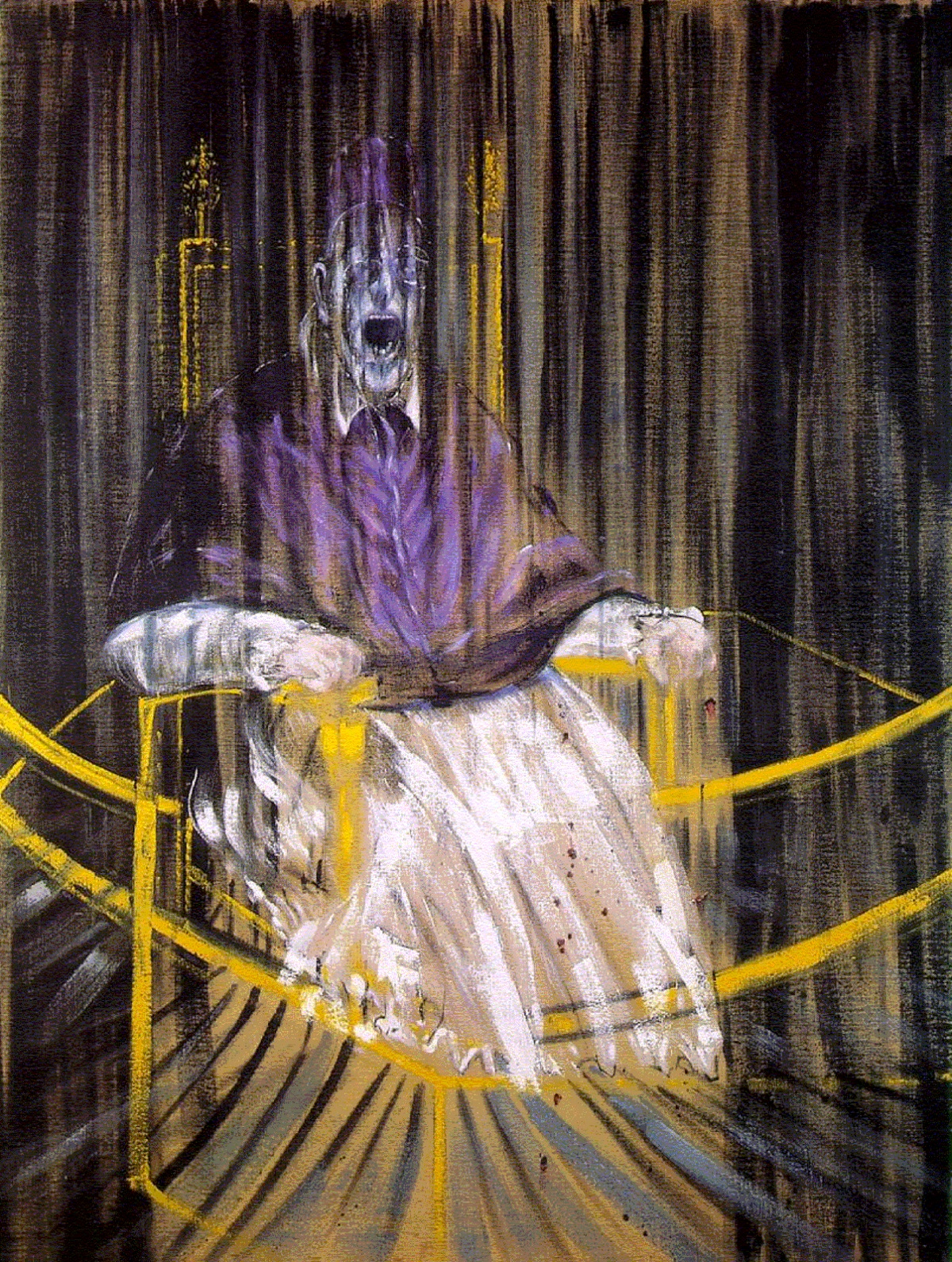 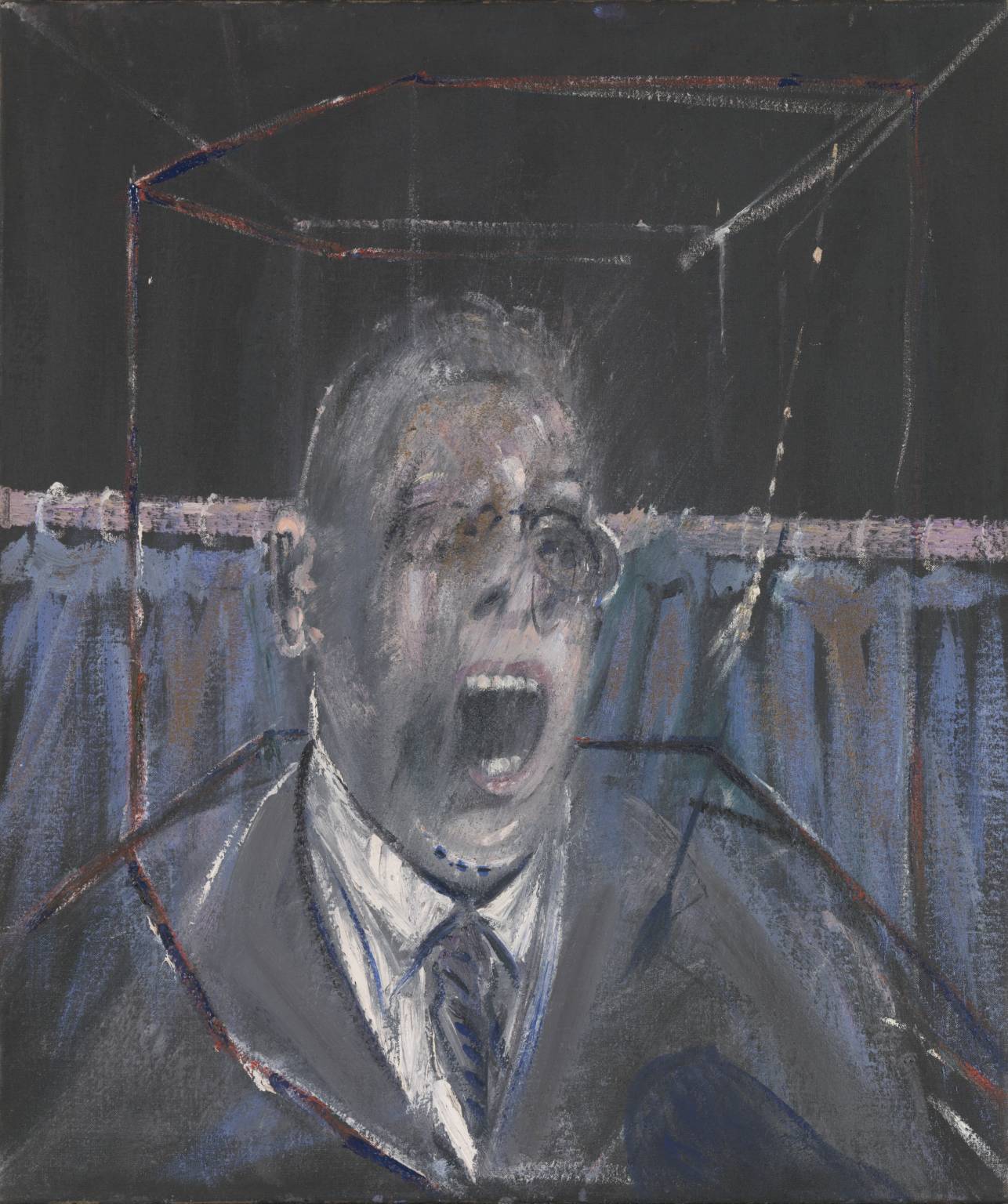 “I have always been very interested in photography. I’ve looked at photos much more than paintings.”

FG: What is your vision of the world?

FB: Since the beginning of time, we have had countless examples of human violence even in our very civilised century. We have even created bombs capable of blowing up the planet a thousand times over. An artist instinctively takes all this into account. He can’t do otherwise. I am a painter of the 20th century: during my childhood I lived through the revolutionary Irish movement, Sinn Fein, and the wars, Hiroshima, Hitler, the death camps, and daily violence that I’ve experienced all my life. And after all that they want me to paint bunches of pink flowers…But that’s not my thing. The only things that interest me are people, their folly, their ways, their anguish, this unbelievable, purely accidental intelligence which has shattered the planet, and which maybe, one day, will destroy it. I am not a pessimist. My temperament is strangely optimistic. But I am lucid.

“My work becomes a chain of ideas created by various images that I look at and that I have often registered with contradictory subjects. I look for the suggestion of an image in comparison to another.”

FG What role did photography play in your work?

FB I have always been very interested in photography. I’ve looked at photos much more than paintings. Because they are more real than reality itself. When we witness an event, we are often unable to explain the details. In police inquiries, every witness has a different view of the event. When you look at an image that symbolises the event, you can browse through the snapshot of it and experience it in a much stronger way, and embrace it with more intensity. Photography, in my case, reflects the event in a clearer, more direct way. Contemplation allows me to imagine my version of the truth and the image that I have of this truth leads me to discover other ideas, and so on … My work becomes a chain of ideas created by various images that I look at and that I have often registered with contradictory subjects. I look for the suggestion of an image in comparison to another.

I enjoy looking at images since my obsession is painting in a representational manner, so I need to see forms and representational spaces. That gives me momentum but I don’t copy photographs apart from a few Eadweard Muybridge characters that I have integrated into paintings such as L’Enfant paralytique or Les Lutteurs. It’s like cooking. (I was once a chef in a restaurant.) You mix the vegetables, you know the taste of each thing individually, but the blending with herbs and meat, the mixture of different molecules, produces another completely different taste. Every art needs to use images, except for, I think, music.

“By imagining, you transgress all taboos, anything is possible. And pornography helps.”

There are reproductions of my paintings all around my kitchen but I no longer see them. Those that are in the studio help me to imagine details of other images. There are also heaps of illustrated books, magazines, photos. I call it my imagination material. I need to visualise things that lead me to other forms, that lead me to visualise forms that lead me to other forms or subjects, details, images that influence my nervous system and transform the basic idea. It’s the same with books or films that I see. I think it’s often like that for artists. Picasso was a sponge, he made use of everything. Me, I’m like an albatross: I take in thousands of images like fish, then I spit them out on the canvas.

My principal source of visual information is Muybridge, the photographer of the last 19th century who photographed human and animal movement. It’s a work of unbelievable precision. He created a visual dictionary on movement, an animated dictionary. Everything is there, recorded, untalented, without staging, like a sequenced encyclopedia on the possibilities of human and animal movement. For me, who doesn’t have any models, it’s an unbelievable source of inspiration. The images help me just as much to find ideas as to create them. I look at a lot of very different images, very contradictory and I take in details a bit like those people who eat off other people’s plates. When I paint, I have the desire to paint an image that I am imagining, and this image transforms itself. I have also asked a photographer friend to do men fighting but that didn’t work. People have always believed that I painted movement directly from photos, but that’s completely wrong. I invent what I paint. Besides, it’s very often the opposite of natural movement. I have also painted men making love according to Muybridge’s images by using images of man fighting. And I have used pornographic images as well. At the time, it interested me. There weren’t porno magazines and films like there are now. But I have always been interested in pornography. A painter is alone in front of his canvas; it’s his imagination that creates, and sexuality needs to feed on images that you see or invent. By imagining, you transgress all taboos, anything is possible. And pornography helps. I have seen books of Robert Mapplethorpe. It’s interesting but too graphic, too plastic. You lose the excitement that only comes from a crude image. Beauty is the enemy of sex.

EXPLORE ALL FRANCIS BACON ON ASX