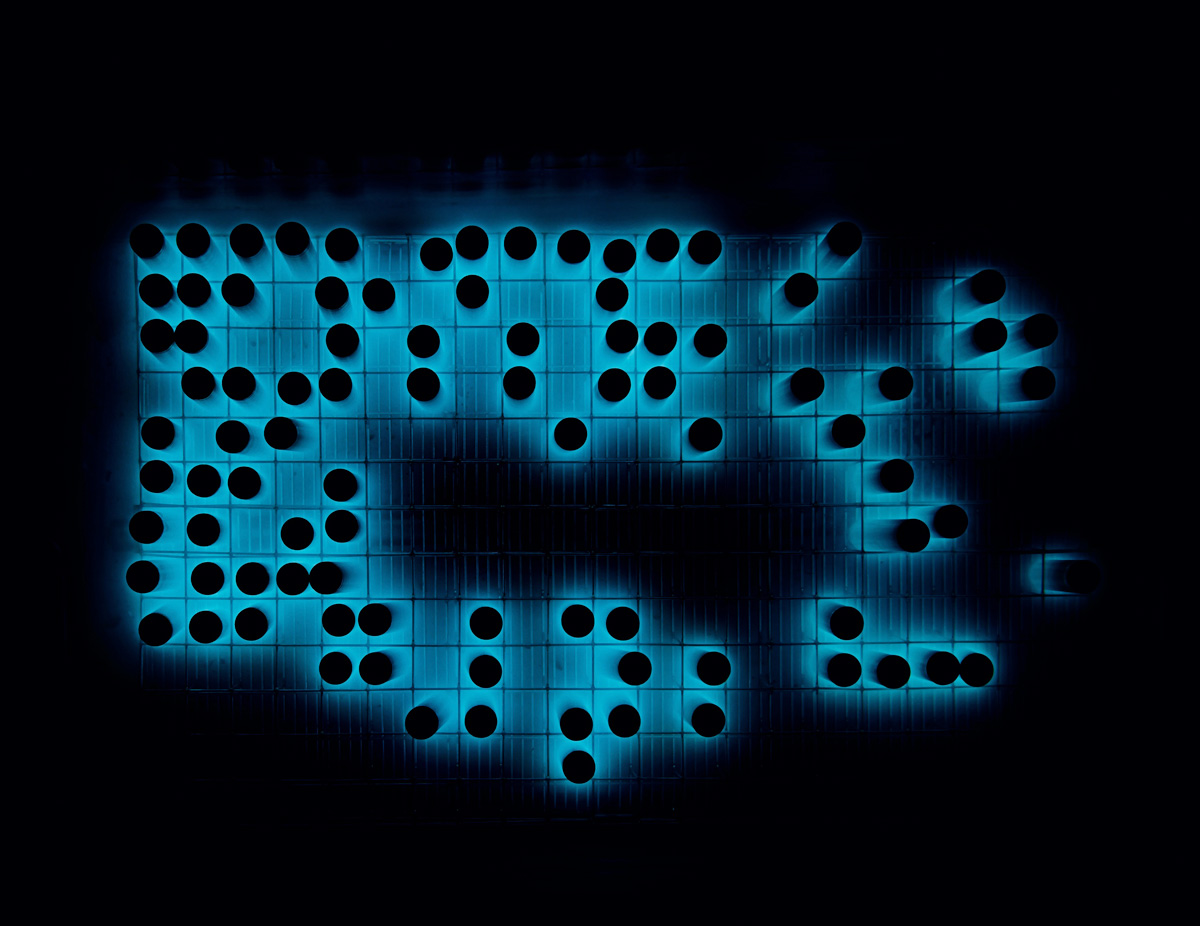 “Whatever our personal weaknesses may be, the nobility of our craft will always be rooted in two commitments, difficult to maintain; the refusal to lie about what one knows and the resistance to oppression.”

Claire C. Carter ends Covert Operations: Investigating the Known Unknowns with a quote from Albert Camus’ 1957 Nobel Prize for Literature acceptance speech. Camus remarked, on the role of the artist: “Whatever our personal weaknesses may be, the nobility of our craft will always be rooted in two commitments, difficult to maintain; the refusal to lie about what one knows and the resistance to oppression.”

Camus words capture the ethic imperative animating spirit of the works preceding them; they also raises the question of why that duty is not extended to all sectors of society. If more journalists and politicians had felt that onus in the early years after September Eleventh this book might not exist.

Among the strongest works in the exhibition are Taryn Simon’s large-format photographs of secret, sensitive, high-security points of US infrastructure. Simon doesn’t shy away from didacticism, but the monotone of her captions coupled with the clinical qualities of her photographs, slightly less alienating than Andreas Gursky, ameliorate the manipulative feelings often concomitant with didactic art. Perhaps the most stunning piece photograph in the exhibition is Simon’s Nucelear Waste Encapsulation and Storage Facility, Cherenkov Radiation, Hanford Site, U.S. Department of Energy, Southeastern Washington State 2005/2007. Within this photograph we see, photographed from above, numerous glowing steel barrels. Simon’s long, impassive caption informs us these barrels are covered with a deep pool of protective water that acts as a shield against radiation poisoning. That beautiful, pure blue glow, known as the Cherenkov effect, is a result of charged particles in the toxic nuclear waste moving faster than the speed of light in a transparent medium (water). 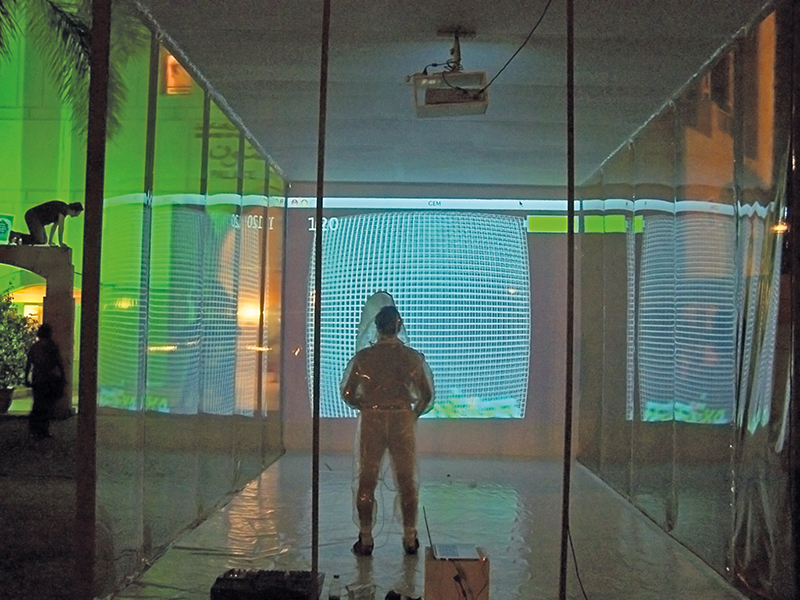 Also notable are the works of Trevor Paglen and Harun Farocki. Paglen’s work is something like a form aesthetically minded journalism that disregards the mainstream media convention of the “view from nowhere.” Paglen has produced visually stunning work, photographs of beautiful red and purple clouds with almost unnoticeable black speck to the side Untitled (Reaper Drone) and the equally atmospheric Lacrosse/Onyx II Passing Through Draco (Radar Imaging Reconnaissance Satellite: USA 69), a long exposure image of a moving surveillance satellite drawing a thin gold line across the deep blue night sky.

Farocki’s contribution is a four-part video series, Serious Games, which utilizes recorded gameplay from US military training games examines the way the government promotes virtual reality to habituate soldiers to violence in the real world. A critique of the idealized aesthetics of war sponsored by the military and also, by mixing in video footage, of t he effect that virtual realities have on their users and creators in America. All these works inform and also aestheticize at such a level as to fall short exploitation but enough so as to justify their presentation as art rather than essay.

Jenny Holzer’s work is a familiar continuation of her practice, the exploration of words as aggressive signs and visual objects, appropriate representation for an era that’s contributions to lasting political discourse is the mainstreaming such aggressive, pithy ideological phrases Operation Enduring Freedom, Shock and Awe, Axis of Evil, War on Terror, and Mission Accomplished into the highest levels of national political speech. Holzer’s large large silk-screen paintings (33 x 25 ½”) of redacted documents obtained via the Freedom of Information Act surely have a stronger impact in person. Her text-based LED installations, in this exhibition RIBS, benefit from the kind of placement that scrolling text is native to: highly trafficked areas like Times Square. Holzer’s work is generally is stronger when placed outside of the museum-space, she excels in public installations, and is her work is certainly diminished in book form. Still, her contributions in Covert Operations, like all of her other work, makes one imagine a possible universe where her work were as prevalent as the propaganda it responded to, if she were allowed a counterpoint to every sign that says “If you see something say something”.

Other works are competent, engaging and intriguing. Thomas Demand’s works of photographs of sculptural environments built out of plain paper and cardboard, simulacra of different famous settings from the worldwide war on terror, are, however, underwhelming. Maybe that’s the point, to unload imagery of some undue power they’ve been imbued with. Either way, it is hardly inspiring work.

Paglen’s work is something like a form aesthetically minded journalism that disregards the mainstream media convention of the “view from nowhere.”

As for the essays, Sandra Philips’ Exposing Ourselves focuses on the history of photography with regard to political power and locates it squarely in the camp of hegemony via spying, surveillance, propaganda, and law-enforcement uses. Dana Priest in The Art of Covert Operations provides a damning, brief history of the Bush and Obama administration’s handling of the war on terror that has little to do with art but provides context for pieces that follow. Claire C. Carter, in Freedom, Security and Violence after 9/11 provides information about the usefulness and limitations of Freedom of Information Act, the USA PATRIOT Act and the conditions under which many of the works featured were made and how they were factually vetted and organized for exhibition.

Covert Operations presents a straightforward but subtle, sophisticated political critique not without aesthetic resonance or, in the case of Egyptian artist Ahmed Basiony who was killed by military police while protesting in Tahir Square, emotional immediacy. It illustrates various forms of artistic practice made from and about the material conditions under which we live which, along with challenging official narratives about the exercise of power, challenges our passivity and agency as citizens subjects or objects of state power.

Posted in Reviews - All and tagged Book Review, Owen Campbell, Privacy and Surveillence.