Small, metaphoric and coincidental sculptures that have been kicked aside and swept back into a mass of entangled matter.

It is virtually impossible to begin a review of Klaus Pichler’s latest opus “Dust” for Anzenberger Editions without mentioning “Dust Breeding”(1920), Man Ray’s microcosmic masterwork photograph of Marcel Duchamp’s masterpiece glass sculpture “The Bride Stripped Bare by Her Bachelors, Even” (1915-1923). Man Ray, in his quixotic examination of things debris and dirt noted the accumulated dust on Duchamp’s glass and subsequently tendered one of the most important and inadvertent keynote collaborations of the Twentieth Century. Man Ray, ever the lateral practitioner saw in Duchamp’s dusty glass a microcosm of ephemeral meaning that spoke in large amounts of a post World War I condition to see the world with a modernist penchant for symbolic overture. The photograph he created was a synthesis of death and passing and also that of trench warfare and aerial photography. To take such a small and seemingly quotidian presence of dust and to magnify it into something that could only be observed from the heavens was a nod to Man Ray’s own ingenuity, and of course to the ingenuity of the original piece by Duchamp. Duchamp’s sculpture would achieve its own allegory after its completion three years later where cracks in the glass would also symbolize the dual grandeur of decay and coincidence. 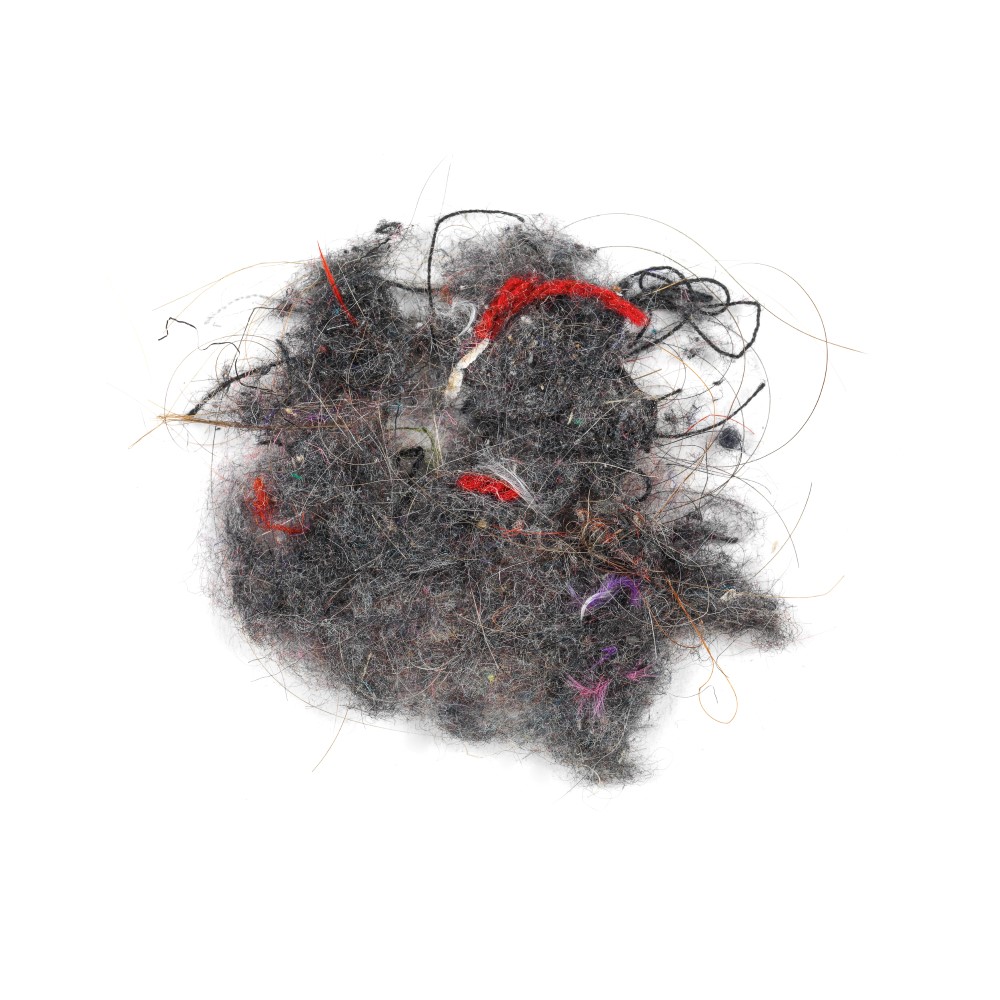 One can almost make out the ellipsis of multiple Fibonacci spirals here and there with a bird’s feather tucked gracefully between interwoven threads of disused silk or wood shavings.

Pichler’s new book “Dust” does much to exemplify the strategy of observation and devotion to the unseen, the fleeting, and also to that of dissolution and chance. The collected works in this cleverly produced book (the cover is literally a lint strewn affair) are a somehow humorous showcase of debris collected in various corners of various spaces and perhaps one belly button. Pichler’s previous works have also explored decay by process of food waste (“One Third”) and he continues brilliantly here with the examination of small metaphoric and coincidental sculptures that have been kicked aside and swept back into a mass of entangled matter. The result is colorful, playful, and much in line with his seeming interest in the light grotesque and death. Where the images could have been collated in a manner more suggestive of abject interest, i.e. there is little in the way of “disgusting “ viscera like excrement or innards from the dusty corner of the butcher’s window, the result becomes almost cosmological in look. One can almost make out the ellipsis of multiple Fibonacci spirals here and there with a bird’s feather tucked gracefully between interwoven threads of disused silk or disregarded wood shavings. I imagine these images in a large size photographic prints to be quite mesmerizing and also very much within the pan-Germanic need for Post-Ranger-Patzch Neue Objectivity. The book wins on many levels and serves Pichler’s vision well.