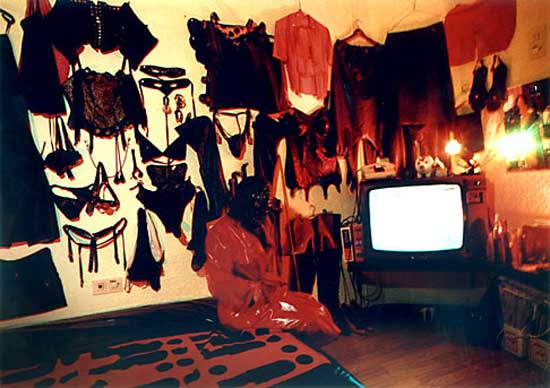 “I got the idea of camouflaging my camera in Frankfurt, where I was shooting an essay on its brothels.”

I got the idea of camouflaging my camera in Frankfurt, where I was shooting an essay on its brothels. Obviously, cameras weren’t allowed, there were signs everywhere. Against the fluorescent background the women seemed to float within an imaginary stage set. They looked like pastry in a display case. They were the bait. I experienced a sense of profound aesthetic pleasure among them. These women also represented an ancient, almost primitive image, a kind of feminine archetype: available yet inaccessible, kaleidoscopic, vibrant and shimmering as a mirage. But in the night and darkness of the corridor, it was my little madeleine that came to mind…the obsessional remembrance of an interior solitude.

Being a voyeur is what I do. My incursions are like a bath in the world’s psyche, its lower layers, its shadows. From below I bring back brilliant reflections, intimate traces, traps. I’m attracted by this transgression. I like the idea of bringing into the light the things that are buried, subterranean, like Orpheus descending to the underworld in search of Eurydice. He understood the danger involved. He knew he wasn’t supposed to turn around. And with that single glance, she disappeared from sight. 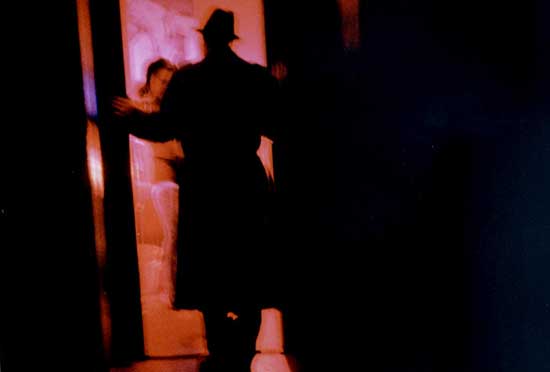 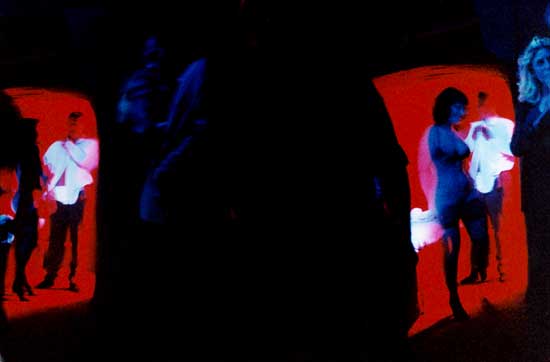 In Paris as well as New York, there is no distinction between the sexes in these places. There are no genders, no identities, no sense of social class. Just a body cut and tied, manhandled, or sometimes nothing more than a pale reflection in an unidentified locale, in the darkness. Everything is in a state of dissolution: bodies, backgrounds. These places are tolerant, non-judgmental, but I do what is forbidden: take pictures. It’s a challenge, almost a kind of sacrilege. I like the sense of excitation associated with danger. I look. I take what I want without being noticed. This mixture of concentration and vertigo, distance and risk, reminds me of Bresson’s Pickpocket. I’m like a shadow. Always alone I try to be invisible, to avoid becoming an object of desire. I’m cautious. It’s important they believe I’m one of them.

“The voyeur is the impotent man at the window, James Stewart in his armchair.”

The voyeur is the impotent man at the window, James Stewart in his armchair. Because he is unable to act, he looks. When we begin to look too closely, we perceive things we shouldn’t see. All those worlds that lie below the threshold of propriety, moral order, the enormous media circus. I’m fighting for media recognition for the crippled, the obese, our flagellants and footsuckers. We are all wracked by the most primitive forces, animal, instinctual. In my photographs I don’t claim to display the real world. I just want to show that we still haven’t gotten over our animality. 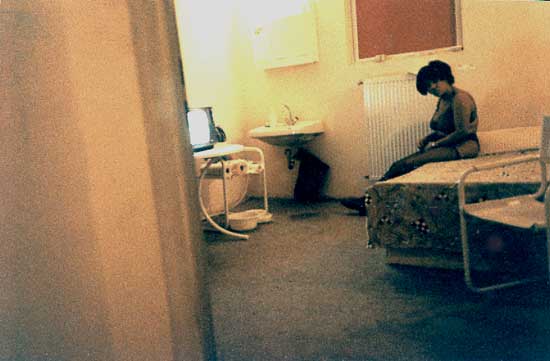 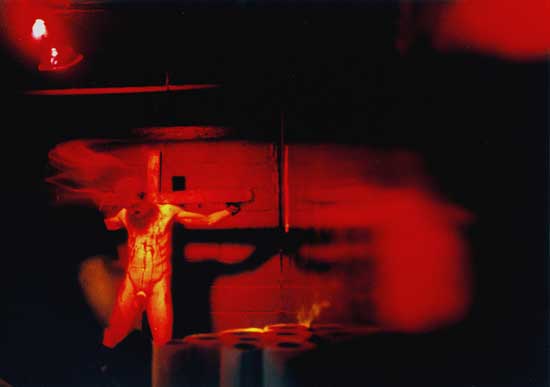 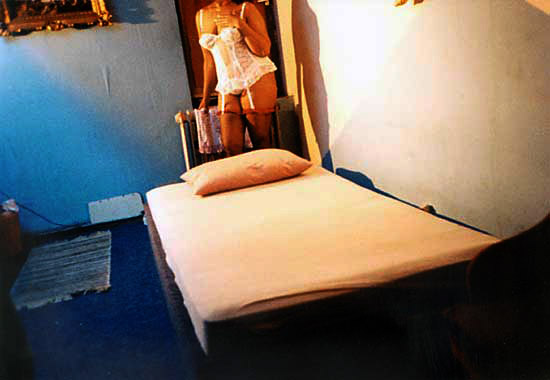 Sublimation has no place in the great mercantile swindle. In these places I photograph skin, tenderness, heat, hands sliding over flesh, a pair of lips on a shoulder, cocks. Monstrosity mixed up with humanity. These people are not ashamed of what they do… they’re alive. Suddenly someone will let go. Release. Orgasm. It’s a perfect metaphor for humanity in its tiny corner of the universe, thrilled with the fear of the enormous emptiness around it.

“I remain on the outskirts, outside the frame. I can’t let go or dive in. I can only dream. An impossible fulfillment.”

During the initiations that take place in traditional societies, we find a stage of dissolution of the individual brought about through physical trials. The initiates have visions of their broken, disconnected body, which rearranges itself in unexpected ways. Soon after the initiation these individuals will be ready to confront the world with a new identity. As for myself, I’ve never managed to become an initiate. I remain on the outskirts, outside the frame. I can’t let go or dive in. I can only dream. An impossible fulfillment. 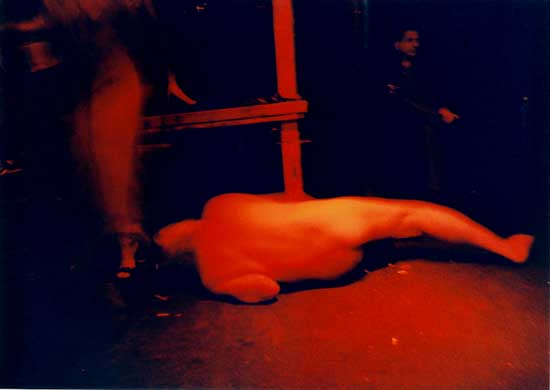 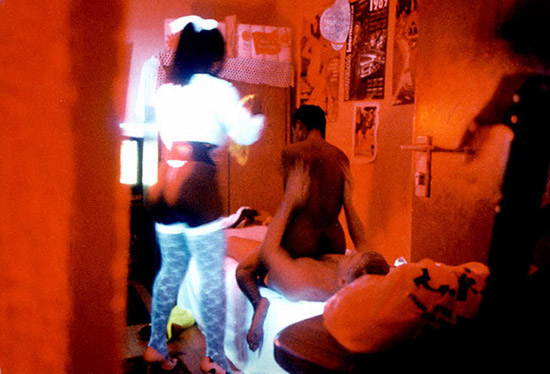 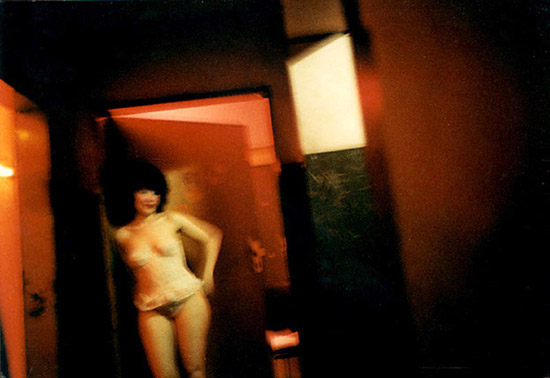 I stand outside these codified relations as if I were the master of ceremonies. A beam of light illuminates the stage. Although I step forward I am unable to reach the stage, which continues to recede before me. No doubt, I photograph to capture the object of my desire. But it is because it continues to escape me, like an absence, a hole in the surface of reality, that it remains desirable. And in every real scene we witness, it is the scene of our fantasies that unveils itself before our eyes.

I am an interloper in the sense that part of me doesn’t exist. I feel like a stranger. The stranger is someone who erects a wall between himself and the world, who stands off to the side, withdraws. This reflects his inability and apparent insensitivity, the impossibility of participating in the world emotionally. I have the impression that buried within me there is a deep lake full of pain, violence, and anguish. If I allow someone to touch me, I’m liable to drown.

I’m trying to talk about my secret life, about what it means to be oneself. Where do I end and where do you begin? Because of the danger, I wear masks. Like Elvis, a character in a film we made in Sarajevo. Is he a brutal coward or courageous hero? He’s suspected of having been involved in somewhat obscure activities, but who will ever learn the truth? In the film, (de) la fenêtre, under pretext of observing the changes in a public space, I discovered my own phantom reflection in the windows of the apartment. My mother told me that she had been haunted by the fear of death when she was pregnant with me. In this film I tried to get closer to my interior lake, the site of my intimacy. At the bottom of the lake lies infinity and a revelation beyond words: wonder, amazement. Art is an attempt to convey that moment.