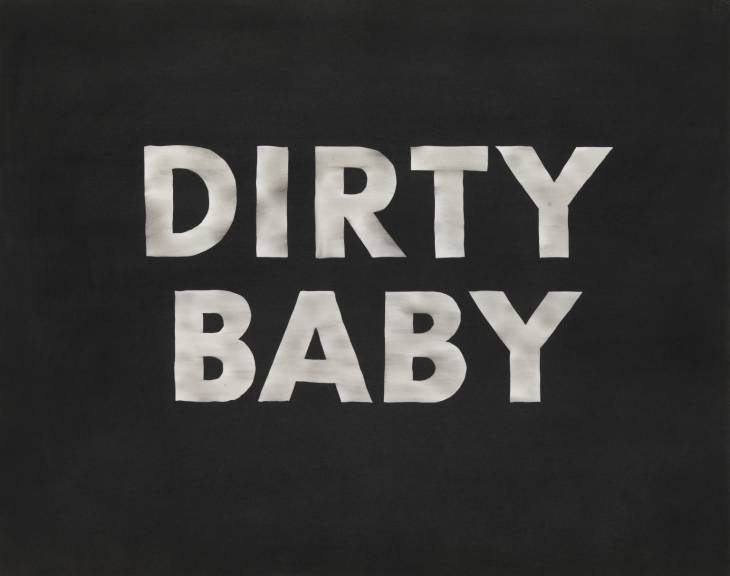 “I couldn’t mix the domestic life and the free form life, I just couldn’t. They’re sort of difficult to mix.”

MR. RUSCHA: There was one period when I moved to Pasadena. I had a studio at 60 West Colorado Boulevard that was about 20,000 square feet.

MR. KARLSTROM: When was that? Do you remember which years?

MR. RUSCHA: 1962—63. I was there for one month. I couldn’t take it, the room was too big for me. My paintings looked like postage stamps. They were so tiny. I couldn’t believe it, it just disoriented me completely.

MR. KARLSTROM: You must have been doing fairly well at that point to afford that space.

MR. RUSCHA: No, it was fifty dollars a month. For 20,000 square feet that’s not bad. But I had to move out. The idea was that I had to move out immediately. Also, from Christmas to the sixth of January I had to give up the studio because people would use it as a viewing point for the Rose Parade.

MR. KARLSTROM: No wonder the rent was so cheap. Where did you go from there?

MR. KARLSTROM: Were there other artists in the area? There must have been reasons for transferring.

MR. RUSCHA: Jerry McMillan had a studio not too far from me in Eagle Rock. But no artist lived around me in Echo Park. Mason Williams, my friend, came and lived over there for a while in Echo Park. Then in 1965 I moved into this place here.

MR. KARLSTROM: So you’ve been here since 1965. Let’s see if I have this right. Do you own this complex? 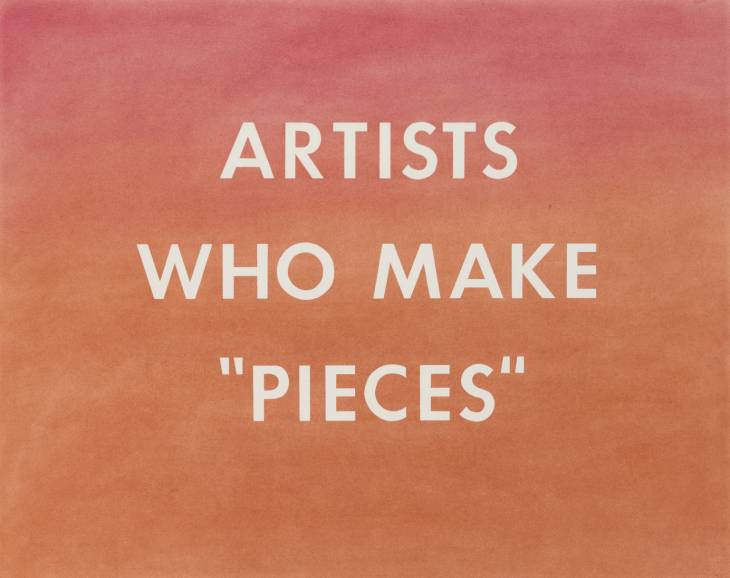 MR. RUSCHA: I don’t take over the–I don’t have the whole thing. I have about a third of it maybe.

MR. KARLSTROM: But I mean the whole complex is owned by you and your partners. So the little shops are rented out.

MR. RUSCHA: This is as of a year ago, so I’ve paid rent here for all this time.

MR. KARLSTROM: So you’ve been here since 1965. Now when were you–let’s talk about your family life a little bit, if you don’t mind –when were you married?

MR. KARLSTROM: Keeping this space as your studio.

MR. RUSCHA: Oh, yes, I always had this place as my studio. I did all my work here, and didn’t really work at home. Only on a few occasions was I able to. I couldn’t mix the domestic life and the free form life, I just couldn’t. They’re sort of difficult to mix. I just couldn’t work, I can’t work with a kid over me. Sometimes I think I can. I like to have my boy come over here, and he sits down and draws and I encourage him to do that. But it seems like, no matter what, you just owe your attention to a child if he’s going to be around. If you think you’re not giving him attention, you still are, your mind is preoccupied with it. So when he’s around me, I can’t really get that much work done.

“I never, never like to hear an artist say, “Well, I’ve got mouths to feed.” I mean, I understand what that means. I know what that means, that they have to do that, but if the artist is going to be affected by it, by the free spirit of the mind, then it’s taxing their creative side.”

MR. KARLSTROM: How old is he now?

MR. KARLSTROM: You mentioned just now that you found it difficult to mix domestic life and I suppose, obviously, the responsibilities that go along with professional life, or as you said, the free form life of an artist, which means you work irregular hours and all this. Did you find that was a significant difficulty in maintaining that balance?

MR. RUSCHA: I didn’t find much disorder in my family life, as opposed to my working in the studio. I’ve always liked–I always did like the idea of being single. I am single now, really, legally, I’m single. But I’m not the kind of artist who can have a family setup, and then a little shop in the back room. I’m really unable to do that. So for that reason —

MR. KARLSTROM: We were talking about the difficulty, or importance, I guess, for an artist or, at least to talk about you, of keeping separation between domestic life, personal life in that sense which involves other people in an intimate way, and one’s working space, if I can use that term.

MR. KARLSTROM: Do you find that attitude puts a strain on your relationship? I mean, you did get separated or divorced.

MR. KARLSTROM: I mean, in other words, in your experience, it was extremely difficult to maintain both.

MR. RUSCHA: My domestic life has been real sweet at times. It’s been through periods of upheaval, deep problems and all this. But I still maintain it, I guess. I mean, I keep my studio open. And it remains mostly untouched by the problems of my domestic life. It gets back to the old question of art is life is art is life. They all, I guess, feed off one or another. 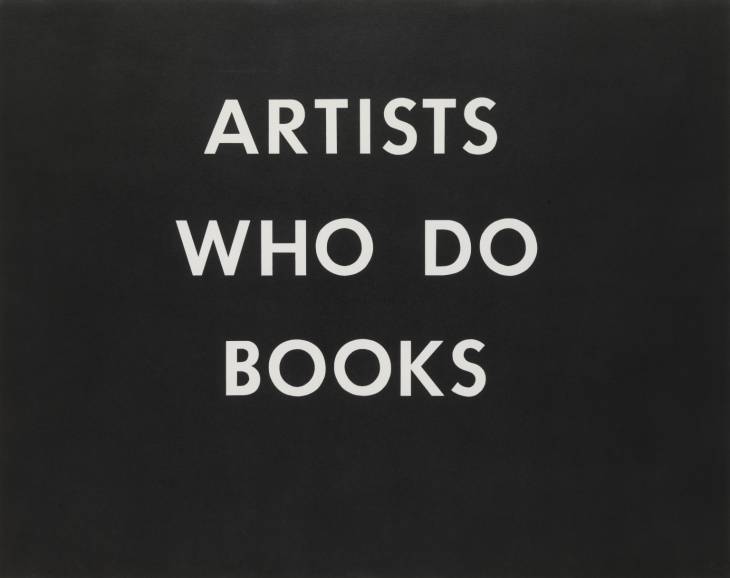 MR. KARLSTROM: Do you find though that it is something–I don’t want to say unique, I don’t mean that — but to a certain type of personality involved with making art, an individual involved in making art, that it seems difficult to remain active as an artist with a certain freedom– I guess, that implies, and I suppose there’s even a certain aspect of social freedom that’s an extension of professional or creative freedom–that it’s more difficult for certain individuals than others who seem to have almost a perfect resolution between married life, domestic life, a kind of traditional lifestyle and the responsibilities and also making art.

I mean, there are certain examples of couples or families where one or the other, usually the man, is an artist. And as you say, it could even be with a studio adjoining the house, a very middle class type existence. At the same time, like he walks through that house, he steps into the studio and produces good art. Do you think that this is a personality thing? Do you see what I’m getting at?

MR. RUSCHA: I guess it is. Some artists are very four-square responsible, and they hold their family in high esteem, and hold their art in high esteem. Somehow they are able to manage and juggle this set of circumstances together and do it very well.

MR. KARLSTROM: Show up for dinner on time and all that.

MR. RUSCHA: Yes, show up for dinner on time and do all that. Some of those artists, unfortunately, run scared, in that they have to–in order to, I guess, the real backbone to them is maybe the family life, so they have to use this, which is the creative life, to go off and feed this, which is family life. I never, never like to hear an artist say, “Well, I’ve got mouths to feed.” I mean, I understand what that means. I know what that means, that they have to do that, but if the artist is going to be affected by it, by the free spirit of the mind, then it’s taxing their creative side. And then the domestic becomes primary.

MR. KARLSTROM: I suppose one could extend that by saying the requirements and responsibilities of the domestic life of a family have to affect finally the work of art, that one isn’t free, totally free, or as free as one could be to do what one wants.

MR. RUSCHA: Maybe some artist would really need to put a grapefruit in their old lady’s face and walk out. Some of the best work has been done that way, under those extraneous circumstances. That’s been proven too many times.

MR. KARLSTROM: Do you find your personal life has any direct effect on your ability to work? Let’s say a crisis.

MR. RUSCHA: God, yes. Without being psychoanalytical about it, it’s true. All my personal life does have a great effect on what I do. Something will happen in my personal life which will just really be useless over here. And I can’t function; I’m strictly at the mercy of this other thing that’s happened. It’s happened, it’s happened before many times. It’s like made of very sensitive chemistry or something. The things that happen on the personal side of life actually do affect me. It’s true, it does happen.

MR. KARLSTROM: Are there any instances where–certain events in your personal life, a crisis, or maybe something positive– something important that has an effect emotionally on you. Do you ever feel, or are you able to perceive any instance in your work where that then determines imagery? I don’t mean that you illustrate it, but that there’s a carryover. You mentioned not being able to work at all under some circumstances, or you’re too preoccupied. But what I’m asking, under some cases, where life experiences then have determined a certain direction in your work, certain choices you make–can you think of any examples?

MR. RUSCHA: Oh, yes. I would say those movies I did, maybe. Those were examples of me sort of taking from life and realizing how people act. I’m trying to think of specific examples.

MR. KARLSTROM: Let me give a case while you’re thinking. A friend of mine, who’s a very sensitive young artist, and I suppose somewhat temperamental, recently went through a divorce. Most divorces are fairly messy and this was no exception. He’s not the type of person who can build a wall or a protection, he has no shield to protect him from what is happening in his life, and he continues to work.

So what happens is that quite dramatically in his work you could see a body of paintings that were done at a certain time, when the divorce was particularly messy, which we now laughingly call the “divorce period.” I’m not suggesting that there’s anything perhaps that dramatic in your work, but it’s that kind of thing I had in mind, either a negative or a positive, something important.

MR. RUSCHA: I lived with a girl for a couple of years, Candy Clark. Her birthday was rolling around, and I felt like, “God, I wish I could give you the world.” So I painted a picture of the world for her, a painting called, It’s a Small World [1980].

MR. KARLSTROM: Like in Disneyland. They’ve got that rhyme.

MR. KARLSTROM: I can’t believe that. We’ll talk about that later.

EXPLORE ALL ED RUSCHA ON ASX