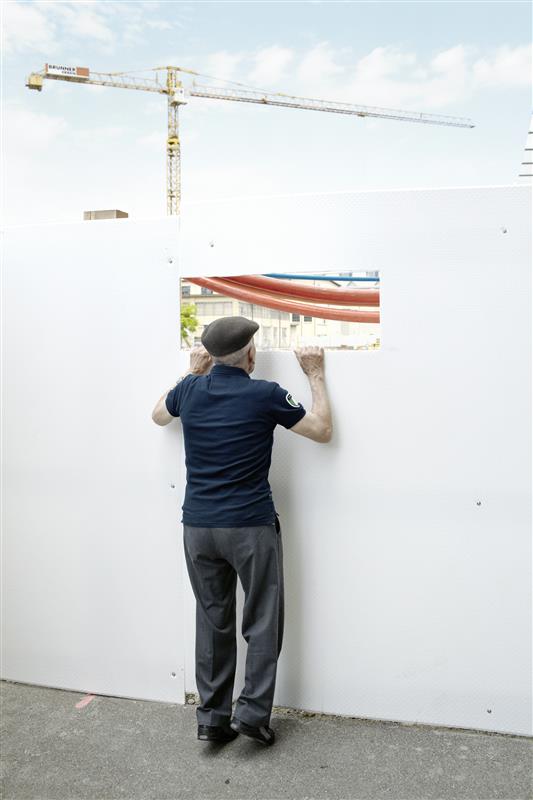 Co-ordination and Re-assignment in the Dissonant Steel Fish Tank

Cento passi is a affectionate, yet somnambulant and lightly traumatic study of photographer Giuseppe Micciché’s father’s decline into Alzheimer’s disease between 2011/2012.

The book is an effective mediation on the oscillating and often times confusing studies of memory, place, and the human mind in decline. A majority of the images are of Fillippo Micciché, Giuseppe’s natively Sicilian father who is witnessed walking through the cold urban Winterthur landscape in Switzerland. Here, swathes of solid color (mostly muted) are found in interiors, which exhibit little pattern. These interior and exterior/architectural studies are mostly of urban landscapes and are not portrayed as dismissive in consideration to the father or Son’s condition as observed and the observing. These elements enable the story of Fillippo to coalesce into that of a metaphorical un-shrouding of the further frailty of memory.

It is not only that Micciché senior is showing progressive signs towards dementia, it is also that within the fabric of his local and historical familiarity of place, I begin to understand the book in terms of late Twentieth and early Twenty-First Century “progress” and the way in which we approach aggressive change and condition to our surroundings. Within this, we see a shift from land cultivation and agriculture into that of a hyper-central urbanization and global production value, in which traditional customs are replaced with the rapid pace of population growth and its effect on location. We may also consider with these consequences the nature of the over-build, of the fast-build, and of the ready-made habitats which inhabit nearly every central city or town with a population of 100,000 residents or more at present.

One can imagine these former architectural totems of the familiar and the terrain of Filippo’s youth interchanging lucidly with a disregard for the customary condition of place into that of a perverse and grotesque new universe of un-familiarity and constant internal re-co-ordination under the duress of his condition. Imagine having your weekly blood test in a new-build glass and steel fish tank hospital. A place that perhaps only reminds you flittingly at best of the cultural sovereignty of mall architecture where glass architecture, commerce, neon lights, and people meld and become dissonant pulses changing the memories you thought you had. Imagine your memories of the rural lands of your youth replaced with an engrossing electronic and steel menace coupled with cold patient chairs and a modernist penchant for blue fluorescent lighting. I imagine what it would be like to be confronted within this syntax…

The exchange of the melting landscape and the language of memory and self and their exacting hold upon the psyche should be much considered adventure if it just didn’t change so fast every time one tried….

As the book progresses, Giuseppe’s fathers slips further and further from places of recognition like the Swiss Locomotive and Machine Plant he worked at for decades which has since been razed. He visits his original home plot, which now stands instead as a neon-lit gas station, with its omni-present lights mixing with the smell of gas.

Concurrently, rubble and new concrete co-align on the streets of Winterthur and in effect lash out at any possible traces of a keystone memory for Filippo. Here, the man can only stand in recognizable discomfort for his fading memories of what was and what it has become.

As a book, Cento Passi is tightly designed with a Prussian blue cover combined with elegant sequencing and nod to more or less documentary vision with excerpts of colorful plant-life and occasional still-life imagery, which dissolve some of the previously mentioned coldness. The seeming weight of the book lies not within the pictures themselves, but rather within the condition that photography can enable, that of place, memory, and identity. Moreover, the book shows sympathy and complete regard for the brooding nature of the subject matter.

As a topic, Alzheimer’s and it’s incredibly difficult conditions have been covered in the past and will be covered in the future photographically and by other creative means, but it is doubtful that the same attempt by Micchiche will exist in the same manner within my own memories.

“.. here in London where I write this before going to Scotland… from where I got the book in Paris 4 days ago… and from the interactions I had with the person who gave me the book from Switzerland… and myself about……the hospital glass….the father in the book….and…the man who used to make pictures of him……in 2014…and several other thoughts mixed in amongst the details of places I’ve been or will ever go… or to that which I can never imagine and the memories for which I possibly never keep…….”