Having been familiar with Thomas Mailaender’s books and output for the past six or so years since “Handicraft”, I am frankly astounded at the exceptionally refined quality of this latest offering from his collaboration with The Archive of Modern Conflict. The book is possibly one of the most elegantly designed opuses in their catalogue and does much to heighten Mailaender’s career with a serious inquiry into a historically absurd episode in British History.

Having been published first in 1937 by an English company who was known for working with Proust of all people, the book is a whimsical and fantastic record of a group of young men, who in the 1930’s took it upon themselves to scale various churches, buildings and monuments by night in Cambridge. Somehow it feels like the perfect Brassai book with its nocturnal wanderings and surreal Spiderman acrobatics. The images in the book recklessly record these men scaling these sentinel architectural beasts by way of magnesium flash and pure adrenaline. Perhaps mainly to the pursuit of silliness, the group’s endeavours, recorded by camera, offer insight into the territory that human imagination sometimes gets to under the duress of boredom. That or perhaps it is an modernist foray into new frontier-ism much like contemporary attempts to scale skyscrapers by urban extremists. The men stare upwards and contemplate how to conquer these cold and inhabited architectural tombs and proceed to throw their bodies at something unmovable and unconcerned with human presence. The idea that they literally extend their vision and bodies to the sky instead of the usual physical patterns of fighting against the horizons by acts of running, jumping, etc. is pure genius. The physicality of their inventiveness remains exceptional, especially given the year in which the original publication was tendered. 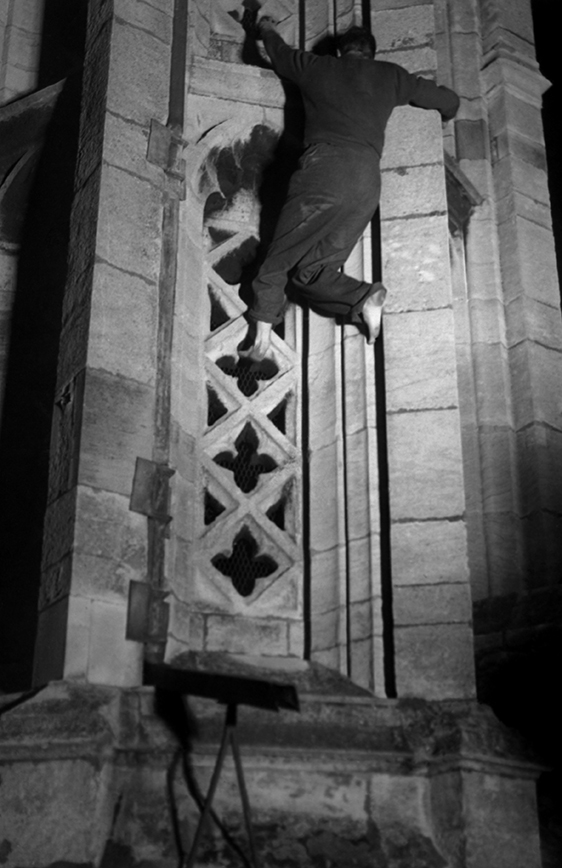 He has also woven himself within the tapestry of the Night Climbers history by returning this magnificent piece of history back to a new generation through the very act of publishing the book again with an incredible sense of refinement.

Mailaender, whose usual work seemingly fixates on the absurd and the patterned nature of idiocy in human behaviour with work mostly culled from the Internet and appropriated for re-consumption has found within the Night Climbers a similar historically illogical trend. That being said, the book and archive that he himself sourced enable a greater sense of astonishment and respect from that of his usual interests. He has also woven himself within the tapestry of the Night Climbers history by returning this magnificent piece of history back to a new generation through the very act of publishing the book again with an incredible sense of refinement.

The black velvet oversize tome is tactile and this is only the tip of the proverbial iceberg of classicism that the book unleashes once opened. Several inserts at quarter size of the full page render notes found on the back of the original photographs complete. It shows process. It shows forethought and pure enjoyment by both the climbers and Mailaender himself. When seen as a whole the book is black. Black pages. Black cover. Black text. This is of course, a metaphor for the night itself. I suggest it would be harder to find a more graceful book in either the archive of modern conflict or Mailaender’s oeuvre. It radiates contemporary thought with historical dialogue and should not be missed.