A multiplicity of femininities in flux in Schorr’s 8 WOMEN

First things first: Collier Schorr’s 8 Women is strikingly beautiful. It’s comprised of thirty-two luscious, yet minimally styled, fashion shots of models, artists, and Schorr’s friends, culled from the past twenty years of her career. Many were snapped at hired shoots, where Schorr would squeeze in a few extra frames after finishing a commercial job.

In one photograph (Camera Work), model Freja Beha Erichsen sits topless—completely naked save for small glimpses of her tights, a clunky silver bracelet, and a headband. Her eyes, fixed on the camera, lined with shadows of dark make-up, sear through the page. Her mouth is slightly open, as if mid-sentence. She’s naked, stripped down completely. But, for Schorr, it’s not that simple.

“To be naked is to be oneself.

To be naked is to be without disguise.

To be on display is to have the surface of one’s own skin, the hairs of one’s own body, turned into a disguise which, in that situation, can never be discarded. The nude is condemned to never being naked. Nudity is a form of dress.”

Schorr complicates this distinction, maybe even throws it away. Perhaps it’s never possible to be simply naked; we’re always wearing disguises—not one, but many at a time. And maybe nudity doesn’t necessarily preclude subjecthood. These disguises become parts of ourselves.

Schorr’s Women are, then, both naked and nude. Both the photographer and viewer are heavily present, as if the subjects’ bodies are speaking to you, determining their relationships to you, creating you in relation to themselves. Some throw a penetrating gaze; others glance away with seeming modesty. Maybe she doesn’t know or even care that you’re there?

“They aren’t stripped down to be consumed…They’re strong. They’re dressed even though they’re undressed, ” Schorr says.

The models in 8 Women are autonomous bodies, existing simultaneously as subjects and objects. They create the photograph and are subject to its gaze. They remind us that there’s both power and vulnerability to be found in bodies, in photographs. They are conversations—between model, photographer, and viewer. 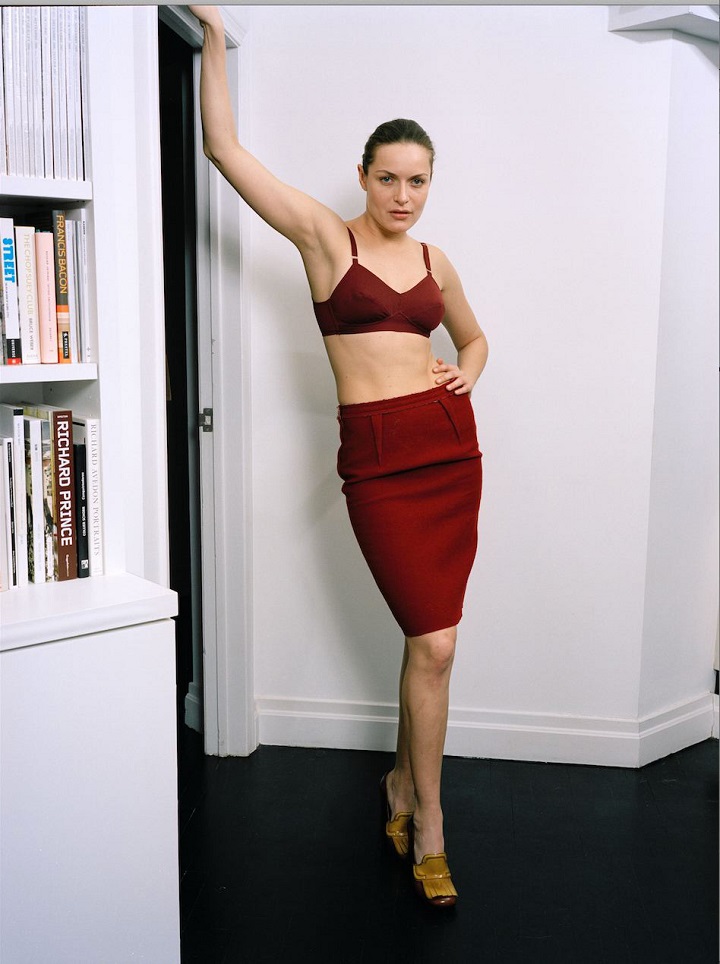 Some questions remain: who are these 8 Women, and what does it mean to be a woman anyway? Of the nineteen models, at least one is male-identified (Wesley Phillips). Gender expression seems to run the gamut. Schorr broadens the reach of femininity, and this range seems an integral part of her queer vision of womanhood—genders and bodies constantly moving, clashing, transforming.

It should be mentioned that Schorr doesn’t stray far from the thin model prototype—perhaps a result of these shots’ proximity to the commercial fashion world or the artist’s longstanding aesthetic interest in fitness and physical discipline. I imagine this project expanding infinitely, incorporating more women of color and differently abled and differently sized bodies.

Many of Schorr’s Women are composites, collages scanned or rephotographed from books, sketches, prints (we’re never sure which are hers and which are found, but that’s just as well). Books are stacked on top of each other, obscuring faces. Several strips of a photographic print are re-assembled—a body emerging from the pieces. Fragments fall in and out of the frame: a torso and legs curve elegantly across the page; a cropped view of a crotch turns into a landscape; pieces of furniture morph into anatomy.

Schorr, with her models, creates complex, shifting identities. In I Love Dick, Chris Kraus writes—of her own difficulties using the 1st person:

“…I couldn’t ever believe in the integrity/supremacy of the 1st Person (my own). That in order to write 1st Person narrative there needs to be a fixed self or persona…But now I think okay, that’s right, there’s no fixed point of self but it exists & by writing you can somehow chart that movement. That maybe 1st Person writing’s just as fragmentary as more a-personal collage, it’s just more serious: bringing change & fragmentation closer, bringing it down to where you really are.”

8 Women doesn’t propose a singular womanhood but, instead, traces a multiplicity of femininities constantly in flux. These photographs are intensely personal, bringing gender down to where we really are, the skin.

In comparison with 303 Gallery’s show of the same work earlier this year, these photographs feel more at home at the scale of a catalogue. Their intimacy—gained through the sense of touch, the physicality of the pages—is lost on the white gallery walls. The toothy paper both flattens and deepens each image, revealing interstitial spaces between viewer and model that are emphasized by Schorr’s appropriation of her own photographs and sketches.

These spaces are sites of complexity and fragmentation, and perhaps the best we can hope for is to piece ourselves back together in the process.