Is it high art? Well, put something in a museum, as they say. Some viewers are sure to scoff at what might be misconstrued as pin-up girl pics; indeed, in unflattering light, they are nothing but the private fetishistic trove of an ageing man.

Despite its mass popularity as, basically, a family toy, the Polaroid instant camera has acquired a considerable reputation in fine art photography since the camera’s launch in 1947. Artists such as Ansel Adams, Robert Mapplethorpe, Andy Warhol, Robert Rauschenberg, David Hockney, and Lucas Samarras have all taken the Polaroid for artistic spins. More recently, the tactile, analog nature of the Polaroid instant shot has helped distinguish it as a species of Slow Art—artisanal, non-digital, nostalgic, retro—prompting the Impossible Project to step in to manufacture instant film when, in 2008, the Polaroid company announced it would cease production. Because instant photos have no negatives and are not easily reproduced, a Polaroid shot sports the badge of being a unique record of a given moment. Because the film develops in front of your eyes, it flaunts a flair for magic. And because the instant’s patina is imperfect—because it is not afraid to show its flaws—it feels downright human and personal.

The current show at Gagosian Gallery, “Carlo Mollino: Polaroids,” offers a peek into a relatively unknown trove of instants—a series of erotic portraits shot in the 1960s by Turinese architect and designer Carlo Mollino. Despite being a flamboyant playboy who got his kicks rocketing down ski slopes, stunt piloting and racing cars, Mollino kept these steamy photographs private until his death. If the show weren’t fantastic, it would be naughty. (No wonder there’s a heavy, faded-red curtain covering one of the gallery’s glass walls.) Yet there is undeniable beauty in the glossy, slightly metallic hues on view here. These are not the bold colors of today’s touch-screens, but rather the washed, brassy, chemical tones of the Past.

Is it high art? Well, put something in a museum, as they say. Some viewers are sure to scoff at what might be misconstrued as pin-up girl pics; indeed, in unflattering light, they are nothing but the private fetishistic trove of an ageing man. But Mollino was a consummate designer and architect, whose elegant furniture pieces took inspiration from human curves (he developed a unique method of bending plywood), and the prints in this exhibition demonstrate Mollino’s mastery of composition and his exacting eye for detail and fashion. Soft flesh collaborates with the bold dresses to create stunning arabesques. A large turquoise jewel seems splashed on a leather sandal. Beige and white zigzag stockings vie with the industrial metal pattern on radiator grill. In one photo, the slender white curve of a lampstand rises up like a snake charmed by the model. And there are hints of depth and mystery, especially at the photos’ edges, where a glowing strip of dreamy light or a shadow of unmeasured space behind the model’s screen hints at a kind of private infinity in the room beyond. Near the serrated edge of another shot, the black curve of an umbrella handle—like a piece of punctuation in a hazy yellow glow—recalls the Surrealistic markings of Man Ray’s Le Violon d’Ingres. 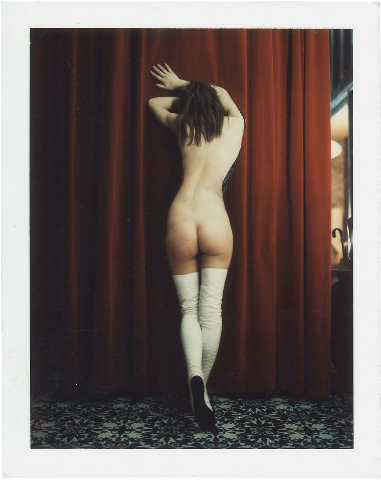 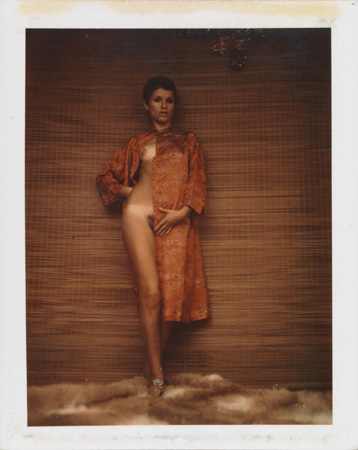 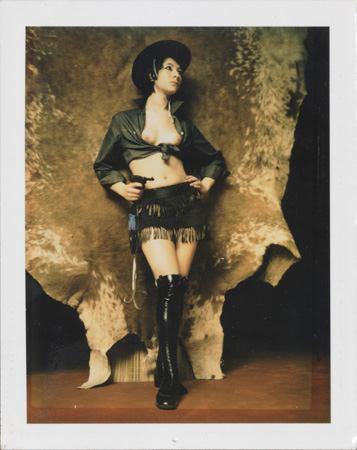 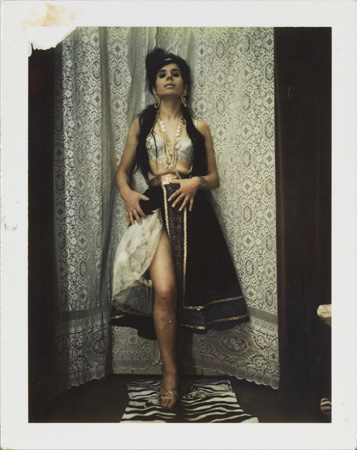 Are they worth it? The photographs are certainly beautiful to behold, and in terms of investment, their monetary value might increase over time. But the real value of these Polaroids is that they are unique objects in a way that Instagram photos can never be. And like all art galleries, Gagosian is trying, almost in desperation, to preserve the aura and the authority of the original work of art. Remember, there are no negatives and the Polaroids cannot be easily reproduced. Sure, they can be scanned or re-photographed, as they are for the show’s companion book (published by Damiani), and they can be digitized and posted online, as some (not the ones in the exhibition) are on the American Suburb X website.

But there is nothing like being in the same room with the original work of art. Just as you can’t kiss someone online, you can’t truly experience Mollino’s Polaroids in a book or on a screen. It’s the difference between seeing a picture of Mollino’s Copenhagen chair and actually sitting in Mollino’s Copenhagen chair. (The single chair at Gagosian’s exhibition—smoothly fashioned chestnut with oak legs—looked forlorn, as though Mollino’s ghost were sighing in a corner of the gallery as the public pored over his cache.) Without this essential faith in the superiority of the original, the economics of the art world, not to mention its religious aspects, would collapse.

What Gagosian’s exhibition makes clear is that the once humble Polaroid instant is doing more than its fair share in propping up what cultural critic Walter Benjamin famously called the aura of art’s authenticity. In the age of wanton reproduction and copyright insouciance that is today’s wild World Wide Web, it’s not an easy job. Gagosian has unearthed a lonely man’s treasure of erotic photographs as a reminder to art collectors that the cult of the original is still strong. The exhibition is a ritual paying homage to the matchless object, to the one Polaroid that is the real thing. The unique object is exhibited not only for its own merits, but to reinforce the very concept of authenticity.

Thanks in part to exhibitions such as this, perhaps Walter Benjamin’s 1936 prophecy on the future of art is not unfolding exactly as he had envisioned it. Certainly, rampant reproduction of art online is widespread, and the Museo Casa Mollino will face an uphill battle to control the electronic spread of Mollino’s images. These Polaroids are about the same size as a cellphone screen, and it’s virtually second nature for us to want to zip them around the internet as we do with baby pictures or those ubiquitous plate-of-food images. (Ironically, the high quality of today’s devices ensures that the imperfections of Polaroid technology—the occasional white flakes, the subtle puddle where the ink pooled—are preserved, even highlighted by HD tech.) But is the authority of the original work of art necessarily depreciated or jeopardized by such mass circulation? In the most crucial ways—theoretically and economically—the wide distribution of Polaroid reproductions merely underscores the fact that there does indeed exist the one, seminal original. Go and see it.

John Parras teaches at William Paterson University and is Editor of Map Literary: A Journal of Contemporary Writing and Art. The recipient of a National Endowment for the Arts fellowship, his newest story appears in the spring issue of Conjunctions.

EXPLORE ALL CARLO MOLLINO ON ASX