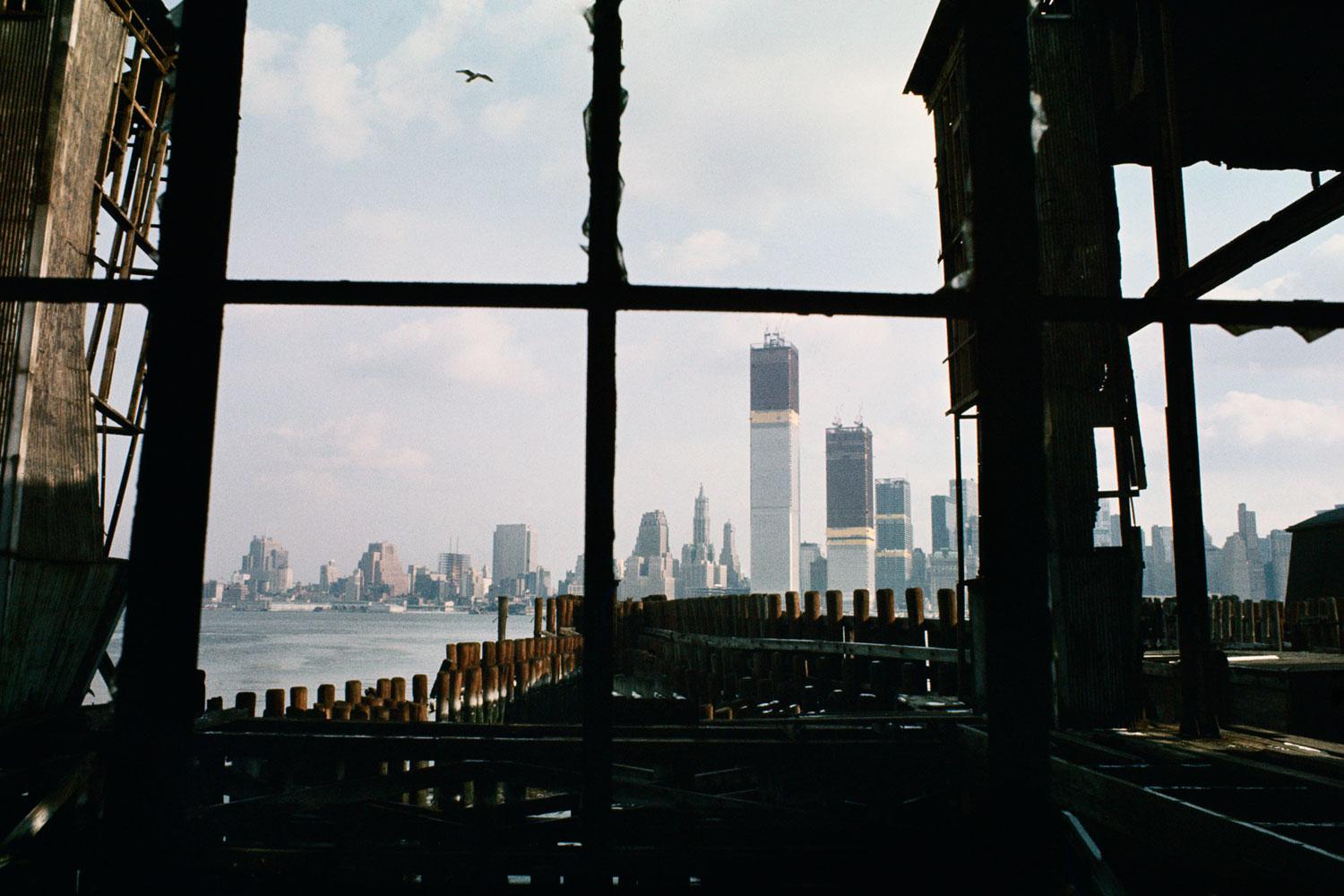 “All of a sudden you would look around 360 degree angle, and there was the Trade Center.”

Looking at the World Trade Center

What was magical for me was that in some ways as you get away from them, they acquire another dimension. From up close, they — you know, I found them very brash and often times vulgar. But the moment you move, and the moment they started mingling — and first they mingled with the buildings of lower Manhattan, and then you could see those linear forms, and next to them you would see the temples, temple tops, and you would see the statues. You know, they still had the statue, this dancing figure on the top of the old AT&T Building, the Cable Building. And all of these things began to play with this modern form. And there was from the beginning, when you were still in Manhattan, there was this feeling of (you know) sort of — this is then and this is now. We are the new boys. We’re defining the new world.

And then as you began to get farther away, then the water played a role. So they came up from the water. And that was in the tradition of the old monasteries that are built, you know, right by the ocean, or the churches and so on, the new church in LA that’s built right on the expressway, the new cathedral. And you could see them. There was this tiny Greek church, you know, came up to about three stories. And it was just sublime to see this tiny thing and these gigantic buildings. And then the water, a river that didn’t care about anything but just going there and minding its own business. And it wasn’t that you alone felt this way, because if you were near the water, you would see the boats coming in. And then you would see people rushing up front, you know, and looking at this, you know, and “What is it?” You know, it’s like they knew that there were tall buildings in New York and so on, but they were never prepared for this experience. And I don’t think that we’re ever prepared for the color, for the, you know, the brilliance that sometimes they had, to see the way in which you could see a cloud passing by, you know, on top of, you know, you see the shadow of a cloud. Sometimes you could distinguish tiny human beings on the roof.

I only photographed them — the buildings per se — in two occasions in my life, and that’s early on when they were being built, because of this — the sense of awe that I felt when I went there, you know, by this gigantic project. And then the second time around was when my children were small, and I used to take them around in outings all over the city. And then I would take them to the Trade Center, photograph them with the Trade Center, take them up, you know, and give them a sense of sitting by the windows and being able to look down and see the city, you know, the city lands, you know, cars, tiny cars and so on. So it’s to get that view from a place where they felt safe but at the same time a little bit scared. So those were the occassions when my draw, what drew me to this, was the Trade Center itself. 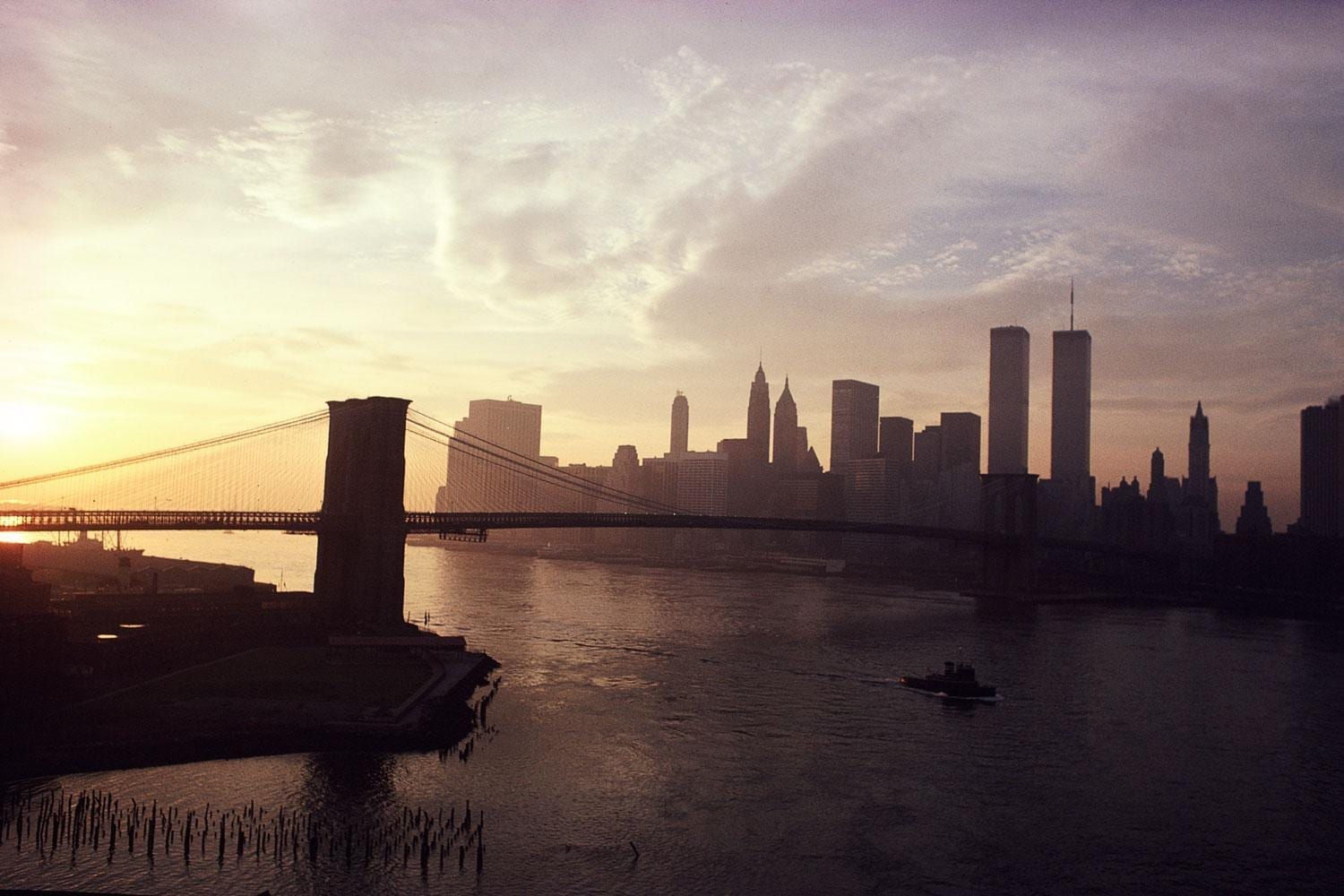 “So, you know, I couldn’t avoid photographing them.”

Most other times, I was out there doing my photography of the blighted urban areas of the largest ghettos in New York, or even in Newark. So I was there making pictures of downtown Newark, for instance. I was on the roof of a building, and then all of a sudden you would look around 360 degree angle, and there was the Trade Center. So it’s almost… It was a picture that you had to take, that was part of showing all the other pictures. I mean, you show the Central Ward, sure enough, you show the river going through, you show the Meadowlands. And then you show, you know, how these towers rise from the skyscrapers in Newark. You show them from father away, because they would show from so far away. I mean, there was…

What was amazing, and I think this has to do with the effect that the destruction of the buildings had had on the people, is that you couldn’t get away from them. And they showed up in the most unexpected places. I mean, you’d be walking a street in Carney, you know, and then at the end there would be the towers.

So my photography changed, you know, around the late 70s, about 77, and then my interest became primarily the built environment. And I had two ways to do this. One of them is by doing repeated visits to the same places, and do them all the time, to show change. And the other one was to do the same thing but do it from high points. So that I would have the photograph of one building, but I could also have panoramas. So the panoramas would serve for me to explore, to look through the photograph and see: Where should I go next?

But also, whenever I was on the roof of a building, there the Trade Center showed up. So, you know, I couldn’t avoid photographing them. And sometimes I would say, you know, “Why am I wasting film?” You know. “Why am I taking these pictures?” But you know, I was sort of drawn to do it.

And I remember the last picture, because it was taken from a building near Broadway in Williamsburg, very close to the water. So I went out there. It was about two weeks before September 11, about three weeks. And it was such a cliché picture, you know. Just a silver river, you know, boats there, and towers to a side, you know, and then the skyline that gets smaller to the other side. And I remember taking it several times. And, you know, it’s like stuff that you do. I thought: Well, you know, this is going to end up in some box, you know, and then they’ll fade away in 50 years. You know. Nobody will see them. Publishers didn’t have any particular interest in these buildings. I can’t imagine going to a publisher and say, “Look, let’s do a book on the World Trade Center,” you know. They would say, “Can’t you find something more interesting?”