If there is any conclusion to draw from the world of Tom Wood’s Men, it’s that in the last decades of the 20th Century there was little expectation of significant change from one generation to the next.

It is only recently that I discovered the work of Irish born photographer Tom Wood, who, for the better part of four decades has been photographing people in Liverpool and the surrounding county of Merseyside in the UK. These pair of books published by Steidl, amply titled Men and Women, respectively, are agreeable in size and design, but somewhat deceiving upon first impression. Both covers contain a straightforward portrait with an obliging representative of his and her sex, seeming to imply that I was about to sift through a book of willing subjects sitting passively for the photographer, all in attendance, as it were, for the neighborhood headcount. However, what I found was quite the contrary; a tireless, whimsical array of pictures depicting a range of characters that span the decades and overwhelm the various frames and formats containing them. It is almost unfathomable that one photographer made all of these pictures. They come in color, in black & white, ostensibly made with large and small cameras, evoking the snapshot, the found, the family, the appropriated, the employee of the month, the centerfold, the event, but mostly the non-event: the daily travails of the working class, and the streets, shops, bus stops, waiting rooms, barrooms and flea markets that they occupy.

The images contain titles listed in the back that are literal references of the place or person’s name and seem to function as notes for the photographer, since they mean little to an outside viewer. But the most telling moments in the books are the fictional narratives created by the artist through sequencing. Take In a Huff, 1995 and Prom Shelter, 1984 (plates 26 & 27 from Men), where a small toddler sits on the floor facing the corner all alone, neglected, dressed in the red and blue of the Union Jack. On the adjacent page a young man looks back at him, as if at his own childhood. He seems forlorn, worn beyond his years, sitting on a red bench with the gaping hole of a smashed window over his shoulder: the only clue to the unknowable event that is his life.

Tom Wood’s workingmen are where we may expect to find them: outside of football arenas, inside workshops decorated with porno cutouts, or pressed between the rust and hulk of car parts and diabolical machinery. In Women, however, we see a dynamic and unpredictable sundry of daughters and mothers and grandmothers. Pleasureisland Set, 2003 (plate 150 Women) is a picture of two young blonde millennials, sitting uncomfortably, one clenching her leg, with a third girl who’s slightly exposed lower back faces us. They appear vulnerable, somewhat insecure, as they look curiously at the shrewd women in black & white across the page, who look like they came straight out of Weegee’s world, eager to avow their wisdom and disapproval (Mary’s Cousins, undated, plate 151 Women). 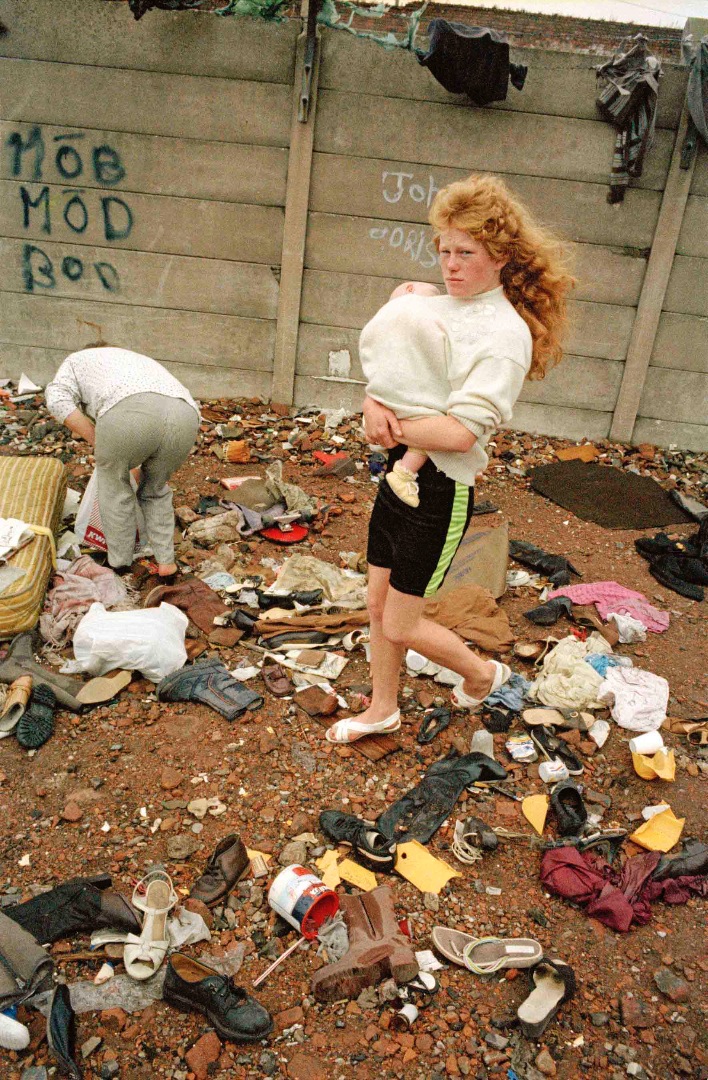 This style of photographing in itself, committing to a neighborhood, a city, with a camera in hand every day for 30 some years, feels archaic today.

If there is any conclusion to draw from the world of Tom Wood’s Men, it’s that in the last decades of the 20th Century there was little expectation of significant change from one generation to the next. And, yet, despite the fact that only a few of the pictures were made as recent as 2012, the work reveals how much the world has changed in the last ten to fifteen years. I have never been to Liverpool, but I would infer that even this famed industrial port town has not dodged the hyper commercial deluge homogenizing the great cities of the world. While its clear the Photie Man (a nickname given to Wood by the neighborhood kids) hangs out in the outer edges of town rather than the city’s center, what we don’t see is as conspicuous as what we do: a social landscape with practically no advertisements, chain stores or name brands (with noteworthy exceptions being plates 133 & 148 in Men). What’s more astonishing is the utter absence of a single cell phone, as if he ended the project upon their mass release. As the major cities of the west become submerged by massive screens, surveillance cameras, and economies fueled by tourism and entertainment, Wood’s work draws to mind the people in countless demoralized cities across this country whose industries have vanished.

This style of photographing in itself, committing to a neighborhood, a city, with a camera in hand every day for 30 some years, feels archaic today. It is worth considering how Wood’s work resembles the early work of Paul Graham, Chris Killip and Martin Parr, all included in MoMa’s 1991 exhibition and publication British Photography from the Thatcher Years (Wood is mentioned in that book by curator Susan Kismaric as a younger photographer to look out for in the years to come). While these photographers disparately adopted more sophisticated aesthetic styles over the years, not to mention respective critical acclaim, Tom Wood stayed the course in Liverpool. What feels so refreshing about Wood’s prolific work is its exhaustive physical labor and complete lack of pretense, which matches the very people and place he is so determined to show us. After all, he made this work just before, during and after the Thatcher years, revealing to us the beauty and complexity of a human condition not merely defined by who is playing the musical chairs of political power.

Born in 1981, Peter Baker is a photographer and writer from The Bronx, New York. He received a BA in Literature and Photography from SUNY Purchase in 2005, and an MFA from the Yale University School of Art in 2012, where he was awarded the Richard Benson Prize for Excellence in Photography. He has taught at the International Center of Photography and lives and works in New York City.
(All rights reserved. Text @ Peter Baker, Images @ Tom Wood)
Posted in Reviews - All and tagged Book Review, Peter Baker, Tom Wood.