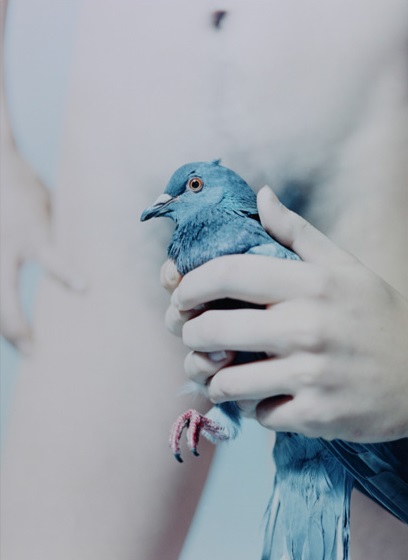 A young woman sniffles and wipes her nose with her hand. The gesture is utterly disarming. It makes her look so young, so vulnerable. But what on earth is she doing out there? Has she injured herself by moving through that desolate landscape? Or worse, has someone else hurt her? The scene shifts. A young man casts a glance over his shoulder. He looks uncertain. His body is partially hidden in the shadows of the surrounding foliage. A sense of discomfort creeps up on me. Who is he? Why is he hiding?

The scene shifts again. Another young man is submerged in water, an eerie light cast over his face. Is he swimming? Is he drowning? Should I intervene? But suddenly he is standing elsewhere, looking at his feet, surrounded by a broiling fog. The darkness is as black as night, as blue as the cobalt sea. It is the dead of the night, it is the graveyard shift. Despite the obscurity of the scene, everything seems pin sharp, every detail visible. And the young man is inevitably, inexorably slipping out of my grasp, receding into the mist.

Once I was asked why I take pictures. Weighing my words carefully, I answered that by capturing photographs I had a reason to do things, to go places, to meet people. It was an excuse to venture into unknown territory. Years later I was asked why I love photography in general. I mulled it over, but at the time I could not really provide a satisfactory explanation. But looking at Mayumi Hosokura’s images the penny finally dropped. I love photography, because I can live vicariously through it. It is a gateway to other worlds, real or imagined. 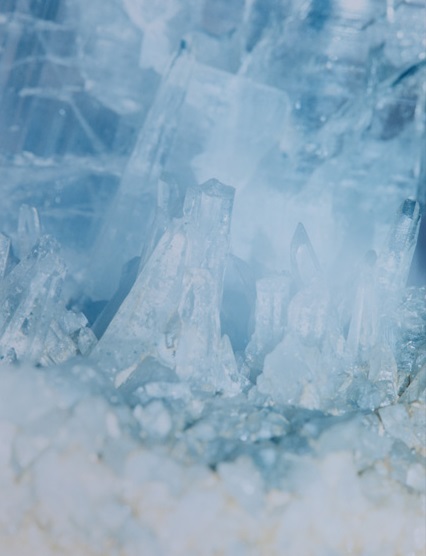 I first became aware of Hosokura’s work when her portfolio KAZAN was published in Foam Magazine’s Talent Issue in 2011. At first her work had me dumbfounded, at a loss what to think of it. But I returned to her work time and again, and slowly I fell in love with it. Taking into consideration that Hosokura’s main topics are eternal youth and timelessness, this is probably the only way to approach her work. There is no instant gratification to be had. Instead we are gently beckoned in. Slowly we become mesmerized by the images. There is a patience to her photographs, a stillness that rewards the viewer again and again for spending more time with her work than just having a brief look. This was also my reason for approaching the artist and talking in detail with her about her practice.

KB: Can you tell me something about your early work ‘Mapping’ and ‘florlite’? What are the concepts underlying these series? And how do ‘florlite’ and ‘Mapping’ relate to ‘KAZAN‘?

MH: Mapping is the very first series of my career. My photographic practice at the time was to take snap shots of every day life. I was influenced by Hiromix, a legendary Japanese photographer of the 1990s. I was also inspired by Wolfgang Tillmans’ snap shots. I wanted to capture the atmosphere of everyday life at the start of the 21st century through snap shots.
Florlite is my second series. It features a young man, who is also the protagonist of KAZAN. The themes underlying KAZAN are youth and loss. I have tried to express this by setting up two contrasting images. On the one hand there are the portraits of the young man and the young woman. They are ephemeral. Their presence is fleeting. On the other hand there are the pictures of minerals, representing eternity. We cannot stay young forever. This is a given: one day we will lose our youth. But there is this beautiful moment right here, right now, because of that inevitability. The young man depicted in Florlite symbolizes this for me. Florlite should be seen as a prototype for KAZAN.

KB: You say that you used to make snap shots of everyday life. But when I look at your photographs there is a stillness, a quiet to the images. They look very carefully composed, very detailed. So are the images actually snapshots? Or do you stage the photographs and present them as snapshots? Do you ask the protagonists in your images to pose?

MH: When I was working on Mapping, I sometimes captured the scenes using snapshots, but sometimes I orchestrated the image. Especially when I portrayed the young man and the young woman. So I mixed styles, because I was interested in conveying a particular mood, one in which we cannot be certain what is reality and what isn’t. I wanted to blur the lines between private and public and to draw up a new map. So then I named this series Mapping. After this series I moved into the style of set up.

KB:Do you look for specific locations for your photographs? For example the scene of the waterfall and the mountainous landscape in the clouds from KAZAN, did you scout these places for inclusion in your projects? Or did you know about them and thought they were suitable for this particular series?

MH: I went looking for specific locations for the KAZAN series. I aimed to find locations of which the viewer does not know where exactly they are and what they are. I wanted to get rid of the name of the land we live in. We understand that this is a waterfall, that this is a volcano. But we do not have to know the name of this waterfall, of this volcano. The same applies to the young adults captured in my photographs. We do not need to know who they are. I use the images as a way to kick start our imagination. 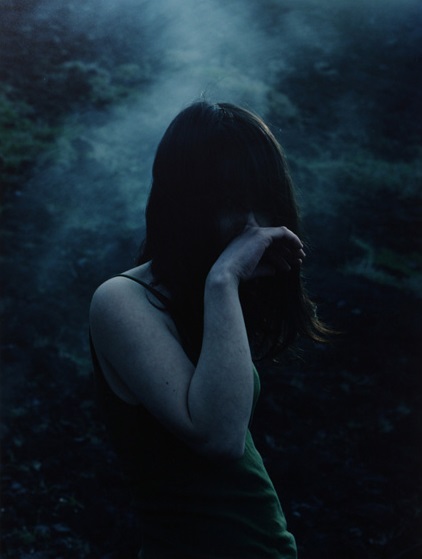 KB: Are you currently working on new projects?

MH: Since KAZAN I have produced two series. The first one was Transparency is the new mystery in 2012. After that I worked on the series Floaters in 2013. And now I am working on a new project.

KB: In ‘Transparency is the new mystery’ you have chosen to work in black and white. Can you explain why?

MH: I wanted to factor KAZAN into the Transparency is the new mystery series. But I reduced the number of elements contained in this project. Colour plays an important role in KAZAN. However, in Transparency… I chose not to use colour as I wanted to focus on the figures in the photographs.

KB: It also looks like you have gotten rid of most of the surroundings in the portrait images. The main characters are often photographed against white backdrops. Why?

MH: For the same reason I chose to shoot in black-and-white. I wanted to focus on the human figures and what they represent. I did not want to focus on their environment, their surroundings.

KB: Just like in ‘KAZAN’ you include images of rocks and minerals in ‘Transparency is the new mystery’. But unlike in the ‘KAZAN’ series you seem to have zoomed in onto the rocks and minerals. Can you elaborate?

MH: It relates to your first question about Transparency is the new mystery. I used minerals as symbols in KAZAN. I paired minerals with adolescents. For me it explains concepts such as eternity and ephemerality. In Transparency… I focused more and more on this particular matter. Plus, I used crystallization as a metaphor for photographic chemicals..

The motifs of my photographs are often nudes and nature. I create work based on the idea of the physicality of the image and its relationship to the imagination. It is natural and mysterious in the same way as water becomes ice and vapour or silver gelatin forms an image by being exposed to light. 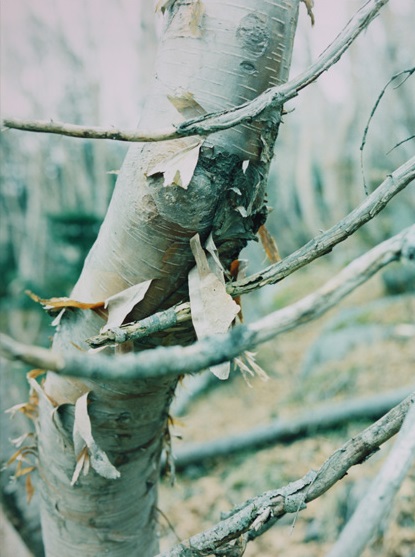 KB: The physicality of the photographic image does seem a recurring motif in your work. Is that why you have chosen to photograph your latest series ‘Floaters’ in colour, then print it as a tintype, then scan the tintype, and print the scan as a c-print?

MH: When I was working on this series, I researched some classic photographic printing techniques. For example the daguerreotype, tintype, cyanotype and so on. Especially decaying images caught my attention. Because decaying photographs express that “it was there once”, especially with portraits of people. At the same time decaying images express “it is here” in relation to photography itself as a material. This is very intriguing for me.

I am also interested in the increase and decrease of information in photographic images after each single process. Each print contains physical marks of the moment and thus contains layers of time.

KB: Because of the way you work in ‘Floaters’ it seems that you can contrast eternal youth and decay in the space of one single image (the colour, the bubbles on the print, the deteriorated edges). Did you try to capture time and eternity by using these processes?

KB: Are the photographs of the plants in ‘Floaters’ a reference to Anna Atkins’ work?

MH: I researched cyanotypes and photograms for this project. I know Atkins’ work, but it is not the only reference. I used the colour blue to remind viewers of cyanotypes when they are looking at my work. But Atkins’ work is a masterpiece for me.

KB:Which other photographers or artists inspire you and why?

MH: I already mentioned Wolfgang Tilmans and Hiromix. Apart from them I am also inspired by Jack Pierson, Nadar, Marlene Dumas and Nobuyoshi Araki. In my practice I always think about portraiture and sexuality, but I do not want to make use of typologies. I think these artists are struggling with that problem. Perhaps Nadar is an exception to that rule. I love him as the master of portraiture in early days of photography. We can think about our sexuality through their photography and painting. We do not know who we are. But we can know that we do not know who we are, through their works.

KB: Thank you for this interview.

Mayumi Hosokura (b. 1979 Kyoto, Japan) graduated in 2005 in photography at the Nihon University, College of Art in Tokyo. Her work has amongst others been exhibited at the Yokohama Photo Festival, G/P Gallery in Tokyo and &Foam in Amsterdam. Her portfolio was published in Foam Magazine Talent Issue no 28.

Karin Bareman is a writer on photography and audiovisual culture, and also works as assistant curator at Foam. She obtained an MA in Visual Anthropology from the University of Manchester, and lives and works in Amsterdam.