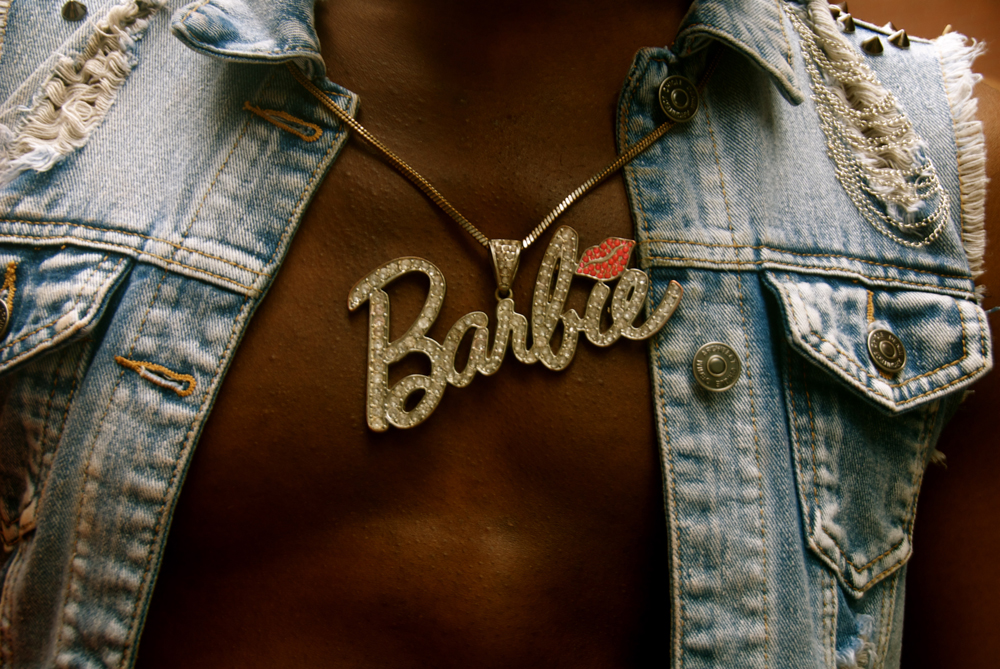 By Ellen Wallenstein for ASX

Curating a show featuring 32 artists in a small space can be a difficult task. But in Up, Close and Personal, Ruben Natal-San Miguel has put together a thought-provoking and varied exhibition dealing with his interest in how artists approach their personal work.

Taking off from his own series of the same title, Natal-San Miguel ‘s exhibition is smart. The art is hung with humor and style, in different configurations on each wall and in two rooms. Most are photographs or photo-based. Each piece has its specific energy and message. These aesthetically diverse works are structurally held together by design elements. Exhibited without labels or titles, the groups coalesce.

This exhibition presents the work of some well-known and some up-and-coming artists. The postcard features “Aphrodite” by Tyler Shields, an underwater image of a red-lipsticked woman with a thumb in her mouth. It is the sexiest photograph in the show and definitely the right choice. Welcome to Bushwick!

A trip around the show:

The back room, which is small and spare, shows the work of only a few artists. These include Amy Elkins, whose postcard/drawing/correspondence with a death row prisoner is intimate and persuasive. Set in a corner, above a hassock on which to read the letters, this is one of the few non-photographic pieces in the show that feels like it belongs.

Jeremy Kost shows two polaroid-type collages (hung in two different rooms for some reason) of men (needless to say handsome and young) dressed in scanty underwear, posing in a chair and on a ladder, The central focus of both, shown at eye level, is (not surprisingly) their crotch. Better is Kost’s third work in the show, “Impossible Existence”, a large acrylic enamel painted negative of the actor Tom Cruise, which blows his other work out of the water (pun intended).

The standouts in the back room are Brenda Kenneally’s two black and white portraits. Taken in Bushwick, Brooklyn, a decade apart, they are of a tough young man on the street, whom she got to know over time. The earlier image (“Andy”, 2001) is a vertical ¾ length portrait of him in a backwards baseball cap, smoking a cigar, sporting bling on a chain around his neck; in the background is another boy, holding a pit bull on a leash. The second photo, taken years later, is from closer up: the same young man now grown, posing with his mother. He is wearing a hoodie, flashing a gang sign with his fingers; his mother’s hold a cigarette. They both look directly into the lens.

The first image in the main room is a large framed snapshot by Rafael Fuchs of his parents, dancing in their living room. This image is hung high on the wall, over a blowup of part of the wallpaper from the original photo. This pattern makes its way around the room and unifies all the groups of images. On the north wall it acts as a horizon line between two sets of images; on the east wall it is placed as thicker vertical stripes behind the salon of frames.

Jennifer Loeber’s small diptychs also use vintage photographs, of her deceased mother (from three different years) coupled with more recent snapshots of her objects. But the strongest work on this wall are two separate portraits of loved ones by Adrian Chesser, taken as he told them about his HIV status. The two women pictured are reacting to this news, one crying and the other looking surprised and terrified. These images are fastened to the wall with nails (perhaps alluding to his future).

The Black & White north wall is about tradition and history. It showcases an Annie Leibovitz portrait of Merce Cunningham from 1997, (his gaze turned away from the camera, incidentally). Dawoud Bey’s “A Boy Eating a Foxy Pop, Brooklyn NY” from 1988 still holds up here, as do some design-oriented architectural details by Timothy Briner (though no year is stated and four pictures seems too many.)

David J. Carol’s witty street and subway photographs from last year seem timeless in this company. Cara Phillips’ fantastic “Ultraviolet Beauties # 147” stands out here, a beautiful silver gelatin print. The quality of the print (not to mention the image) makes her still-life below it pale by comparison. The wall ends with Michael Wolf’s “Tokyo Compression #39”, 2010, a woman pushed up against a subway window. Its color leads us on to the next wall:

In the most complicated configuration, one wall is hung salon style with furniture in front. It contains some of the most colorful images in the show, centering around Hank Willis Thomas’s “Grille” (2008), a large photo of a ballsy set of teeth. The placement of this image anchors the entire wall. It’s hung under Phil Toldedano’s crying baby pillow, over Natal-San Miguel’s “Barbie, Harlem NYC“ and between Jon Feinstein’s “12 Grams” and “11 Grams”, scanned fast food portraits.

The tableau includes two square images by Michal Chelbin: a young Russian prisoner condemned to death, on a bed in an empty dormitory room; and “Alicia, Ukraine” a portrait of a girl in a old style blue-green car, looking out of the window. This image echoes the spirit of Robert Frank’s car pictures, but in color. Other standouts on this wall include Carolyn Marks Blackwood’s “Ice in Tide”, Mona Kuhn’s sensual portraits, and Carlo Van der Roer‘s aura portrait, “Miranda July, 2009”.

If one sits in one of the chairs one can admire Lisa Levy’s sculptures that are set on the table and around the room. These mirrors-morphed-with-trophies take the title of the exhibition literally. Each has a message: “Wake Up You’re Arrogant”; “Stop Blaming Yourself “; “They Know You At The Gym” – that reflects oneself back with an ego-deflating sentiment.

Also interspersed throughout the room are small photographs of several “up close” and hidden surveillance cameras, by Sherilyn Behr. These small documentary color images of hidden-in-plain-sight cameras slyly remind us of the work of Big Brother and the NSA.

There are only a few false notes/weak links in this exhibition. Betty Tompkins’ “Fuck Painting #17”(2005) felt out of place, hung in a corner like an afterthought. Luis Carle’s “ Miss New Jersey Pageant” drag queen was mediocre on an otherwise strong wall. And Trey Speegle’ s silkscreened images, which use vintage paint-by-number paintings as their source, were not up or close or personal, just far and derivative.

It can be risky to curate a show in which your own photographs figure prominently, but Natal-San Miguel excels here as artist, collector and designer. I look forward to his future collaborative curatorial efforts.