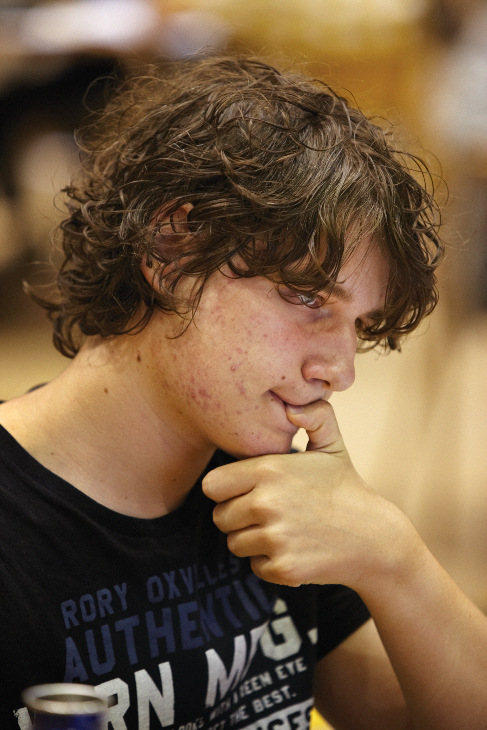 By Ellen Wallenstein, review of Land Line for ASX, April 2014

Land Line by Michael Schmelling is the photographer’s third volume published by J&L Books. Jason Fulford, the principal of J&L, is a quirky, brilliant man. His choice of artists, books and publications is very particular and peculiar. In his own and others’ work, his forte is gathering groups of photographs that by themselves could be considered meaningless, but when cobbled together and paginated become wry commentary. This is certainly the case in this latest venture, which was designed by both photographer and publisher.

The title might refer to our atavistic telephone system or some sort of rescue equipment.  Or, as Wikipedia puts it “a connection between two or more points… (with) survivability and security”.

This book is about memory and cognition, with a large measure of visual humor that threads its way through the chapters. Schmelling took photographs at two USA Memory Championships in New York; at the International Olympiad for Informatics in Ontario; at a barbershop in Atlanta; aboard a federal prisoners’ transport plane; at a Medical Marijuana Business Seminar, an ESL School, and of a famous Hollywood actor.  A lot of these photographs are of people thinking, trying to remember, memorizing, forgetting, questioning and interpreting. Many of the subjects seem unaware of the camera.

Reading Land Line is like solving a crossword puzzle- it needs to be perused, looked at again and again as mental connections are made. As in a crossword puzzle the answers to the clues don’t come all at once- only after several passes do we associate and re-member and re-connect and fill in the blanks. And like a crossword puzzle the answers connect to form an interlocking grid with spaces in between. There are several blank pages in the book, pauses that separate images and sections and give one a chance to reflect on what was just seen. The sum is greater than its parts.

Schmelling begins and ends the book with the USA Memory Championships, where people memorize and spit back random sequences of numbers, words and cards. This first series of pictures are one to a page, beginning with an image of a man who is a doppelganger of the publisher himself. This same man appears near the end in the last sequence of photographs, taken at the earlier convention; he appears four times in both sequences. (I enjoy the joke here, if I’ve gotten it, as well as the portrait of the Hollywood actor, who is none other than Kevin Bacon, of “Six-Degrees-Of” fame). 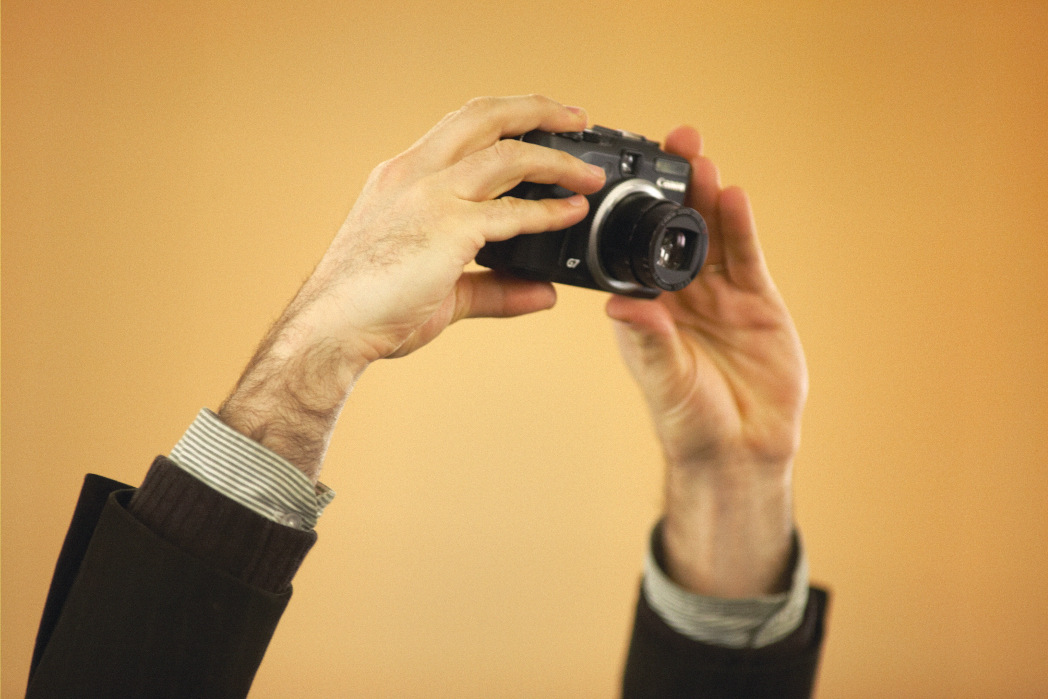 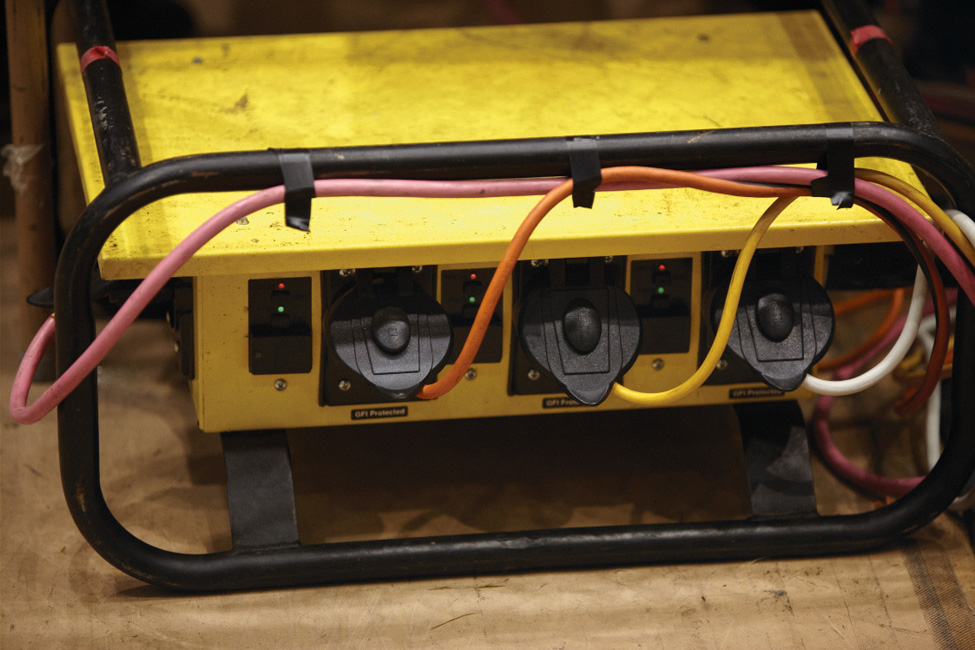 These first USA Memory Championships photographs are followed by images from the International Olympiad for Informatics, in Ontario. This contest has to do with code and coalescence. The sequence starts with full-page vertical portraits of various teenagers with all but two concentrating on something outside of the frame, and ends with two horizontal photographs of groups of teenage boys of varying ethnicities. These are good portraits.

Next there’s an interlude –an uninteresting still life – a chess board, cigarettes, potato chips in a ziplock bag, a beige plastic bag and a newspaper. It looks like it could have been made in some sort of waiting room. (I think this image is from Atlanta, but it’s hard to tell.)

Then, we find ourselves on a transport plane with prisoners, where we are shown various details (ankle and wrist shackles) but no specific faces. There are, however, close-ups of the backs of heads, with obvious scars and tattoos. In comparison there is a similar photo in the next section of the book, which features people at medical marijuana business seminar. In that sequence we see a similar view of the back of a man’s head but his crew-cut looks soft, smooth and innocent.

The people seeming to have the most fun are those at the marijuana convention (not known for good memory skills). This event is an exchange rather than a competition; they wear nametags and look to be to enjoying interacting. One of the salesmen (who appears twice) is William Loman (Get it?). The last photo from this sequence features a shiny red attaché case, which we assume is filled with Product.

From the marijuana convention we go to a section of quite wonderful portraits of teenagers at an ESL School. These vertical ¾ views feature boys and girls dressed up in costumes seemingly chosen from a box of unusual clothing and props. A crown is used in different ways by four of the teenagers; a few pose in the same cape and jacket, in different configurations. The oddest figure here is a black boy wearing a fluffy white beard holding a picture of the Mona Lisa; equally eccentric is a boy in a blue jacket and a cardboard hat, channeling his Inner Napoleon.

Following these kids is the portrait of Kevin Bacon (the 7th section!). He is wearing a black leather jacket, hair askew, looking calmly at the camera. This image appears to be the punchline before the Coda, the second group of photos from an earlier Memory Championship. This time the photographs are presented two to a page, forming interlocking grids of four. The last photo is a small rather blurry photo of the winner of that championship, holding his trophy and wiping his forehead while the three surrounding judges ignore him.

Memory flows back and forth as references are made. Remembering is not always a narrative process, though separate sequences read coherently. How are the expressions of concentration on the faces of the people at the marijuana convention similar to or different from those at the memory contests? How are the faces of the teens at the International Olympiad in Informatics similar or different from their counterparts at the Memory Olympics or the ESL kids? Everyone appears intent on remembering, or at least not forgetting.

Photographs that at first glance seemed banal, in combination and with repetition become fascinating. Continual readings heighten this sensation. There is a sense of accomplishment in solving the riddles and puzzles and getting the jokes. Pieced together in the mind, the photographs are humorous and compelling, but not really remarkable.

Ellen Wallenstein is a photographer, writer and Professor of Art. She teaches at Pratt Institute and the School of Visual Arts, in NYC.