Q. Do you think of photography as a concrete way of dealing with ideas?

A. No, it’s not that they are ideas, per se. I see art as a dialogue about experiences and the way you experience things. And primarily, what I am dealing with is visual experience.

Q. So the dialogue is between you and the environment?

A. No, the dialogue is between me and whoever sees my pictures.

Q. So you’re talking about communication.

A. Right. Initially it starts out as a dialogue with oneself about those experiences and about the way experience can be manifest in objects.

Q. I don’t understand what you mean by experience being manifest in objects.

A. Well, you go through life and you have responses to certain kinds of experiences, smells, looking at things, touching things, and you have certain kinds of responses. Some are very intense and some are less intense, and some bring you to a kind of immediate awareness of what’s going on and a clarity of vision or a clarity of understanding the nature of things, and others are pretty much ignored and passed over. And as an artist, I think you can traffic in those kinds of ideas. You can take those experiences and make objects which give other people similar kinds of experiences.

Q. So you think that through the photographs, you’re in some way conveying your experience to the viewer? 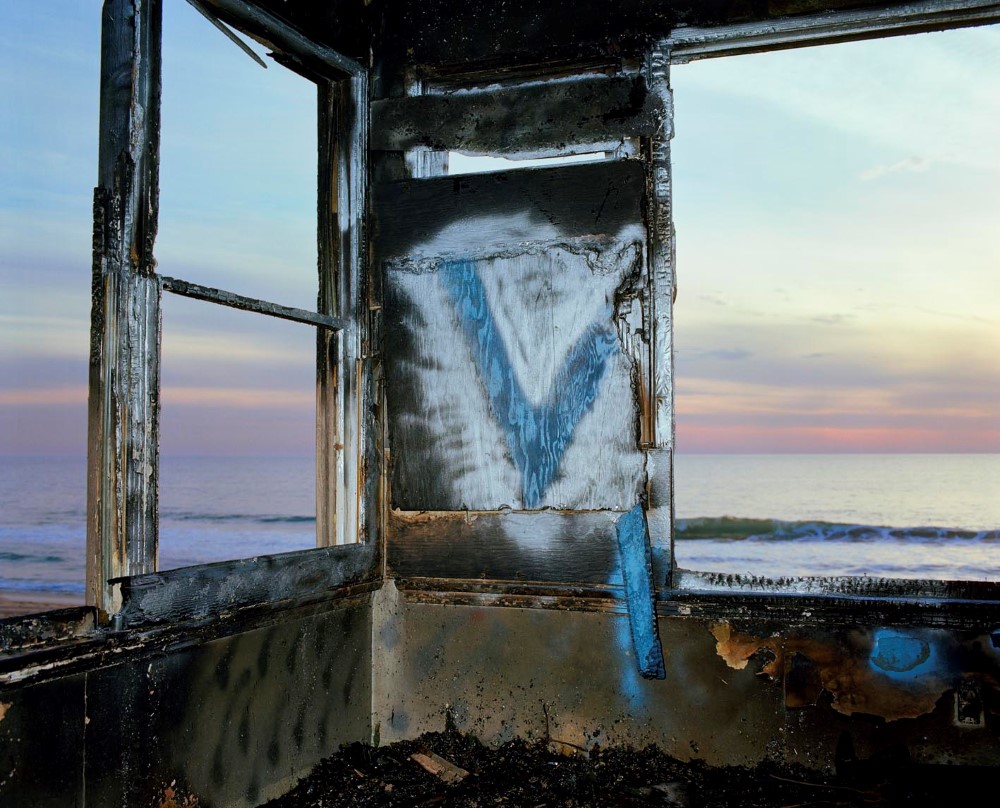 Q. How much does chance play a part in what you’re doing?

A. Well, a great part. And, as a matter of fact, the more I can get in there that is unpreconceived by myself and still make it work, the better I like it. The greater degree to which reality exerts itself and lesser degree to which I exert myself, the better as far as I’m concerned. So when I’m working, I’m not worried about making documents of my marks. I’m just changing things to see what happens. I’m no more interested in my own marks that I am in debris on the floor or the way a curtain flies up because the wind’s blowing in. Or if I throw something through the air, I certainly don’t know how that’s going to look, but it’s just moving things around and creating an environment for something to take place. When I make the marks and when I throw things through the air, I try to be kind of spontaneous and not really think about it in a real conscious kind of way. And when I photograph I try to be more conscious and deliberate.

Q. When you’re doing these things-you’ve got the camera and you are painting-do you go back and forth between the painting and the photographing so that you’re doing both simultaneously?

A. I don’t set up the camera and then look through it and go paint and then go -back and look and then go paint.

A. No, when I paint, I haven’t got a specific framing in mind for the camera. I just kind of mark up the space, whatever happens. And then I go back and see if I can work with it. And if I can’t work with it, I might mark some more, I might go to another space, somebody else might come in the next day and kick a hole in the wall and then I’d come back and it would look good then. Or something might happen and a few days later it looks good. So I’m poking the space and changing it around, and I’m not real specific in what I want. I’m not a painter and I don’t come from that background, so I make marks and they look stupid or they look clumsy or they look pretentious, but when I photograph, I don’t even think about the fact that I’ve made the marks, so it’s okay that they’re stupid or clumsy or naive or pretentious. In fact, that’s an element of it, my own naivete in relation to making those kinds of marks.

Q. When you first started doing these things, did you know that you were going to create all those illusions of the paint existing between the surface and the objects? 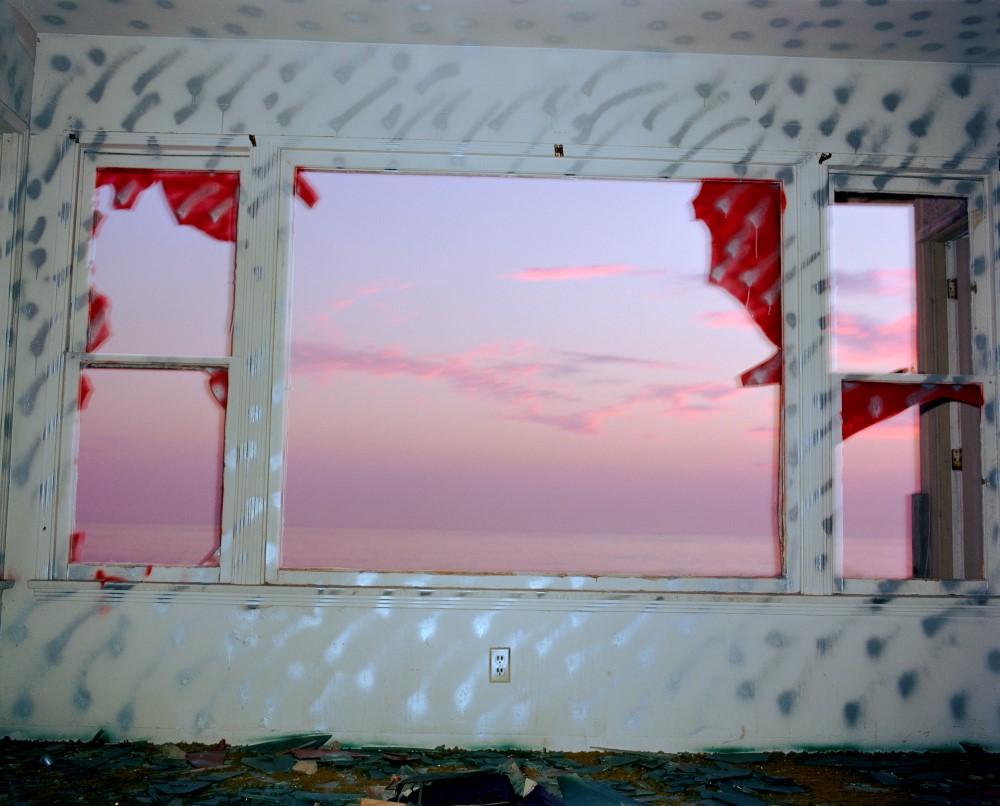 “I was just running on Zuma beach, just jogging with a friend when I came across that house.”

Q. Would you explain what you mean by ‘grids’?

A. Well, at times I use evenly spaced marks, a wide kind of field and that’s what gives them the illusion of floating in space. It’s that proximity and the fact that your mind forms them into a grid which has its own kind of existence separate from the surface on which it lies.

Q. In the Zuma series, were you looking for a building with a window like that?

A. I’d always wished I had a building with the ocean outside the window, and I ended up going out to the desert because that was the closest place I could find that would have a similar kind of space outside the window to work with. And I was just running on Zuma beach, just jogging with a friend when I came across that house.

Q. When you were working there, did you have any problems with people wondering what you were doing?

A. No, it’s the only house on that beach. It’s a County beach and the life guards used to use it as their headquarters. They built themselves another headquarters and this one was obviously totally abandoned and going to be torn down at some point and it was open and on a public beach and there were all kinds of people in and out of it.

Q. Did you have spectators?

A. No, I’d go real early in the morning or real late in the evening.

Q. Was that mainly to avoid people?

A. No, it was mainly because, number one, that’s the most interesting time in terms of light over the ocean. You get a really soft blue and cyan out over the ocean in the morning and you get reds and sunsets going on in the evening. Also, my camera synchs with the electronic flash at 1/30th of a second, so if it got too bright outside I couldn’t work it.

Q. Was the color of the light an aesthetic concern or was it something you were using to evoke a mood?

A. I’m not sure there’s a direct difference between an aesthetic concern and something to evoke a mood, but I never think of them when I’m doing them as ‘this is going to evoke such and such a mood! I never think of them as ‘this is going to be such and such an image.’ I just think that this situation seems to have potential and I’ll just explore and work with that potential and see what the results are.

Q. Some of these pieces look almost ritualistic and primitive in the design of the paint.

A. I get a similar feeling from the earlier work, too-for me. And I always wanted that kind of look. I always wanted to be able to evolve my own rituals, although I never really felt [the pictures] did that. And so at one point I explored making my own scribe, my own set of symbols which didn’t have any meanings and I started working with that, but it never worked out. And again, when I’m doing it, I don’t think, ‘I want this to look ritualistic,’ but I’ve seen that in the work and I like that feeling and I’d like very much to be able to do that, but I don’t really feel that I’ve been able to really make them ritualistic.

Q. Listening to you, one might almost imagine that there was never any separation between art and photography.

A. As far as I’m concerned, there is no separation between art and photography. Photography is a sub-category of a broader category which is art. Sculpture has a long history, but just because somebody was using sheet metal for nothing but repairing automobiles, until one point when somebody started to use sheet metal to make sculptures, doesn’t make too much difference.

Q. But, in a sense, photography has a completely different vision, because it is not object oriented as much and it becomes a window for something else.

A. Well, that’s one thing it is. It is an object. It is an illusionistic depth. And, I guess the number one realm in which photography seems to function is that it has a claimed authenticity. The light bounces off the subject and passes through the lense and burns the negative. And the light passes through the negative and makes the print. So the print is linked to the event by a chain of physical causalities. It’s like a piece of reality, rather than purely a document. It has that claim of fidelity to its source, which is the reason they take pictures on the moon instead of making paintings on the moon.

Q. When you were at SPE, you talked in a way that sounded as if you were doing your photographs very off-handedly, but now I am hearing that you really have a lot of thinking behind them.

A. Well, yes, I’ve thought a lot about them, but there must be a distinction from the fact that they aren’t illustrations for thoughts. The thoughts don’t come first. I do the work and then being in situations like SPE and being in a situation like this, people asking you to write things down, then you evolve a philosophy that fits the evidence and to what degree that has direct relationship to the work, is always questionable. It’s questionable to me. I have certain kinds of ideas and I recognize cer tain things in the work, but I’ve always got to admit that all of those ideas are at least articulated past the fact of making the work, and the work is born out of a more spontaneous interaction with those elements.

(© Dinah Portner, 1978. All rights reserved. All images © copyright the photographer and/or publisher)