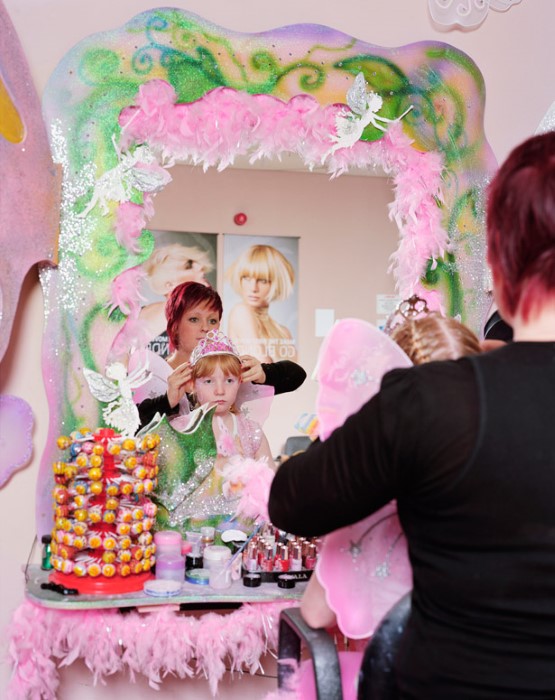 By Niccolo Fano for ASX, January 2014

“Where to stay, dine and play.” – Buntlin’s official website

A young girl sits in front of a large mirror adorned with white sparkling fairies hung on its fluffy and pink contour. Through the reflection, a woman standing behind her carefully places a shiny crown above her red fringe; the final touch to an elaborate preparatory routine suggested by the vast assortment of makeup propped next to a vertical stack of chupa-chups lollipops. The room is a space Barbie herself would ideally live in if she were human: the overwhelming pink walls, details and trimmings are perfectly coordinated in colour with the large fairy wings, embellished dress and crown centrepiece worn by the young girl who solemnly inspects her own reflection: Fairy-tale princess transformation achieved.

This is the full-bleed, glossy photograph featured as the hardcover sleeve of Anna Fox’s book Resort 1 (Schilt Publishing). Although the image might suggest the location to be the backstage dressing room of an American beauty pageant, we are in fact at Butlin’s makeup and hair shop, in Bognor Regis, just a few miles south of Chichester on the coast of England. 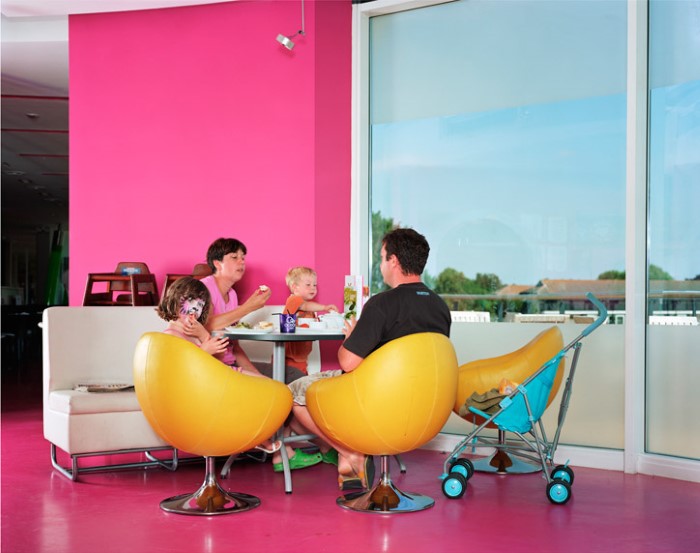 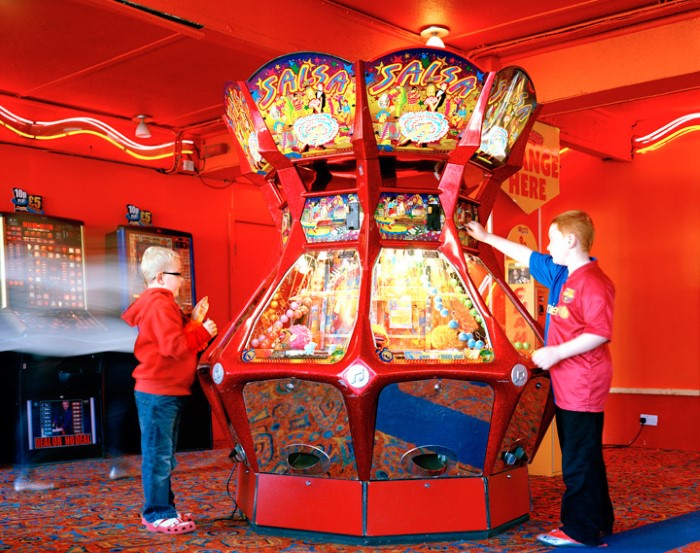 Labour and leisure have always been the main attraction for Fox’s lens. Her 30 year immersion in British culture and society is exemplified by the scope of her enquiry: from the study of office life in the late 80’s (Work Stations), to private rave parties (Afterwards), to village life (The Village and Back to the Village), Anna Fox has eloquently strung together an elaborate blend of public and private life in Britain.

Resort 1 is the first in two series produced by Fox. They both stem from the photographic exploration of Butlin’s, the historic and notorious holiday resort created by the homonymous Billy Butlin (1899 – 1980), who’s utopic concept of affordable family leisure is still alive and well in three locations across the UK.

John Hinde’s 1970’s postcards are the main photographic window into Butlin’s history, forming an archive heavily researched and cited by Fox. Produced with the intent of propagating the corporate aesthetic envisioned for Butlin’s ambitious promotional push, John Hinde’s postcards present a selection of densely populated spaces and idyllic scenarios where activities and events are prosperously thriving in large ballrooms, restaurants, swimming pools and eclectically designed plazas. Whilst Hinde’s images cater for a specific agenda, Fox’s photographs are far less compromised, personal comments. Although Hinde’s influence in Fox’s work is clearly visible through the ambiguity between the staged and the candid, her detached images of public spaces are interrupted by trademark direct flash photographs, who’s crude details of artificial snow and Halloween props add an unsettling layer to the otherwise pristine public environments catalogued throughout the series.

Resort 1 is all about the family experience, the cornerstone of the ‘affordable holiday’ mantra so central to Butlin’s target market. Fox’s 21st Century view of Butlin’s gives way to a far more globalised, anonymous yet universally recognisable ideal of the holiday camp, where the only glaring indicators of ‘britishness’ remain the branded clothing and attire of the visitors. The evolution of these ‘everywhere and nowhere’ environments as described by David Chandler in his introductory essay (one of three featured in Resort 1, others by Dr Roni Brown and Stephen Bull) are purposely monumentalised by Fox with large scale, highly saturated photographs of bowling alleys, arcade rooms, prefabricated chalets and overflowing souvenir shops.

If in Resort 1, adults, teenagers and children collectively consume Butlin’s numerous offerings under blue skies and neon lights; Resort 2, to be published in the near future, will focus on Butlin’s adult breaks and weekends. One might suspect, given Anna Fox’s repertoire and keenness towards the peculiar, that Resort 2 might unveil something far-less quotidian and mundane occurring behind the extraordinarily idyllic, yet slightly unsettling curtain of Resort 1.

We await with curious anticipation.