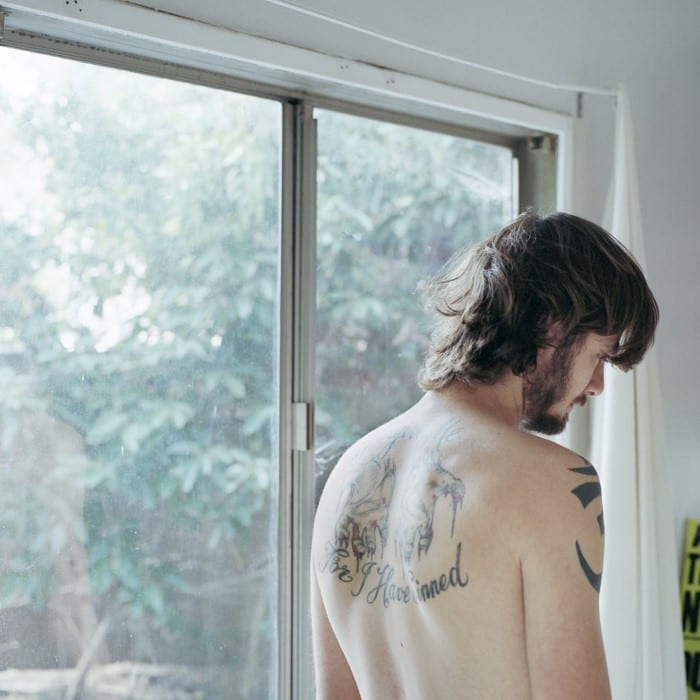 from The Grey Line

By Elizabeth Breiner for ASX, October 2013

The last few years have seen a surge in photography projects from the front lines, Afghanistan in particular, as a growing number of soldiers have found in the viewfinder a welcome reprieve from the insular solitude of their own troubled vision. Bodies of work such as Alexander Allan’s ‘Afghanistan: A Tour of Duty’, Tim and Matt Bowditch’s ‘Afghanistan Blueys’, and Ed Drew’s tintype portraits offer an intimate if sprawling view of soldiers’ day-to-day experiences in Afghanistan, intended to challenge or at least provide an alternative to the representation of the war effort by the media, the public at large, and of course by the military itself. In many ways these projects are as much about the cathartic act of creation as they are about the subject matter being presented; and if they sometimes lack a strong sense of thematic coherence, they gain power not only from the sense of necessity out of which they seem to have been born, but from the overwhelming collective desire they convey to communicate in some form a first hand, unmediated account of the bitter complexities of war.

In Jo Metson Scott’s book, The Grey Line – released in March of this year to coincide with the 10th anniversary of the Iraq invasion – the British photographer gives dissenting American soldiers and ex-soldiers a neutral, but no less thoughtfully structured medium through which to tell their stories. In-person interviews are transcribed into written testimonies, occasionally supplemented by evidential images and scanned in items, and the text for each soldier is paired with a portrait or two by Scott, taken during her visit. Her subjects more than Scott herself seem to provide the content and shape the markedly coherent message of the book, with Scott acting in more of a journalistic and curatorial capacity.

In a way, the former soldiers’ accounts are so commanding, so urgent, that the artistic presentation of the content and even the photographic portraits by Scott come to feel almost secondary to the text. The makeshift, scrapbook style of the book – which causes to it feel rather like the devoted work of a fervently political army wife – certainly suits the content, though arguably gives the initial impression of its being less weighty than it actually is. Scott, perhaps a bit uncertain of her own role in this, handwrites much, but not all of the text—a choice that speaks to the authentic, hand-made nature of the testimonies, but ultimately yields a seemingly arbitrary bricolage of typography; the message of authenticity might have been better expressed had the veterans handwritten their own accounts. Journalistically speaking, however, Scott has done an incredibly thorough job of gathering and presenting her material, and it is worth remembering that the openness and thoughtful nature of the soldiers’ accounts of their experiences surely can be attributed, at least in part, to Scott’s own thoughtful and delicate approach in her interviews. As for the accounts themselves, what Scott exposes is a consistent and demoralising tale of the military’s ethically flawed methods of training soldiers for battle: methods that foster such ingrained obedience and loyalty, such an absolute internalisation of military values, that soldiers forgo the ability to rationally and morally evaluate their own actions. But perhaps this should not come as a surprise in a military culture where “peacekeeping” is enacted through violence and democracy “protected” undemocratically. According to one of Scott’s ex-soldiers, “We’re here to protect democracy not practice it” is a phrase – and sentiment – familiar to almost every recruit.

These are not photographs exposing the harsh realities or daily routines of soldiers at war, nor are they painful visual testimonies to the equally devastating effects of war on ex-soldiers’ attempted return to civilian life, in the vein of Eugene Richards’ War is Personal—a book more wide-ranging in subject matter, but united by its powerful images. Rather, the simplicity and ordinariness of Scott’s images is both their strength and their weakness. Visually cohesive as they are, attractively muted both tonally and in their intensity, on their own they would likely fail to tell a sufficiently compelling story. However, in the proximate context of their accompanying written accounts, and particularly in the greater context of their fellow soldiers’ accounts, the images acquire a lingering potency, paradoxically from the very lack of remarkable visual information they provide about their subjects. Inhabiting a physical state somewhere between natural and posed, these men (and one woman) appear walled off, revealing nothing in their impenetrable, decidedly normal exteriors of the turmoil that we know rages beneath the surface.

What Scott has keenly tapped into is the value of putting an ordinary, familiar face to a story that many might choose to see as the anomalous, traitorous actions of an aberrant minority. These accounts are not justifications but vital explanations from individuals almost all of whom entered into military service with considerable confidence in the rectitude of their decision to enlist. The comparable conviction with which, in varying forms, they choose to reject the military and its unconscionable system of beliefs is only lent additional credence by the ostracism and condemnation they suffer as a result of their ‘unpatriotic’ actions. “We’re not talking about people here, we’re talking about the enemy,” one of the ex-soldiers recalls being told by his superior after voicing concerns about his fellow soldiers’ flagrant physical and psychological abuse of Iraqi prisoners. And it is this same intolerant, dehumanising attitude that he and his fellow dissenters find quickly and mechanically turned against them, the message clear: that doubt and inquiry have no place in the military, and that you can only ever be “with us or against us”. Worst of all, these attitudes extend beyond the military complex to friends and even family in many instances, rendering the punishment for steadfast moral resolve maddeningly complete. By contextualising and normalising these soldiers’ stories, Scott offers a textual and photographic counter to the isolating effects of these intrepid individuals’ actions, reinforcing the fact that their disillusionment is no solipsistic illusion, and magnifying their individual convictions by means of the collective voice that emerges from the book’s pages.

Elizabeth Breiner received her BA in English from Vassar College in New York, and her MA in Issues in Modern Culture from University College London, with a focus on the relationship between 20th century street photography and modernist literature.