Nicole Wisniak: Do you think a photographer is a person obsessed by the fact that things disappear?

Richard Avedon: I can’t generalize. All the remains of my father is a photograph, that is to say film, but I don’t think that’s why I photograph. I see all the time – I very often don’t listen. I can be in conversation with someone and at a certain point, stop hearing what is said, start pretending to listen. My good friends know when that happens.

N.W.: But this overlapped eye is sometimes pitiless. You reveal in your portraits facets of character that people would perhaps have preferred not to show. Do you think it is possible to hide one’s self in front of your camera?

R.A.: I am not necessarily interested in the secret of a person. The fact that there are qualities a subject doesn’t want me to observe is an interesting fact interesting enough for a portrait. It then becomes a portrait of someone who doesn’t want something to show. That is interesting. There is no truth in photography. There is no truth about anyone’s person. My portraits are much more about me than they are about the people I photograph. I used to think that it was a collaboration, that it was something that happened as a result of what the subject wanted to project and what the photographer wanted to photograph. I no longer think it is that at all. The photographer has complete control, the issue is a moral one and it is complicated. Everyone comes to the camera with a certain expectation and the deception on my part is that I might appear to be indeed part of their expectation. If you are painted or written about, you can say: but that’s not me, that’s Bacon, that’s Soutine; that’s not me, that’s Celine. 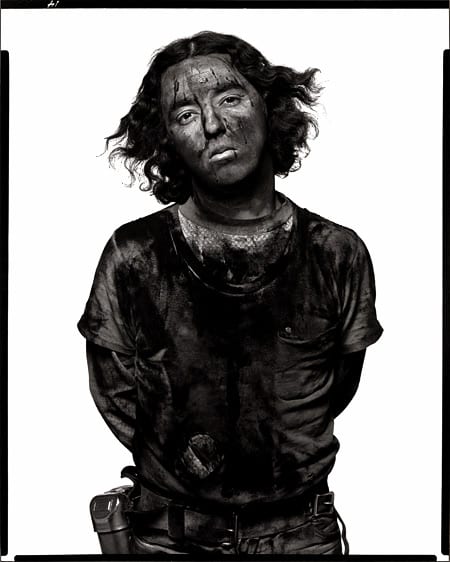 “There is no such thing as inaccuracy in a photograph. All photographs are accurate. None of them is truth.”

N.W.: Picasso answered that saying about Gertrude Stein: “That’s not how she was when I painted her but that’s how she will be sooner or later.”

R.A.: That’s pretty grand of him. On the other hand, now that she is dead, visually that is all she is. It is a terrible responsibility for a photographer. The subject was there — the subject can never say — that is not me. It is even worse in the case of photojournalism, when the photograph is taken without permission. At least I ask, “May I do a portrait of you?”

It is complicated and unresolved in my mind because I believe in moral responsibility of all kinds. I feel I have no right to say, “This is the way it is” and in another way, I can’t help myself. It is for me the only way to breathe and to live. I could say it is the nature of art to make such assumptions but there has never been an art like photography before. You cannot make a photograph of a person without that person’s presence, and that very presence implies truth. A portrait is not a likeness. The moment an emotion or fact is transformed into a photograph it is no longer a fact but an opinion. There is no such thing as inaccuracy in a photograph. All photographs are accurate. None of them is truth.